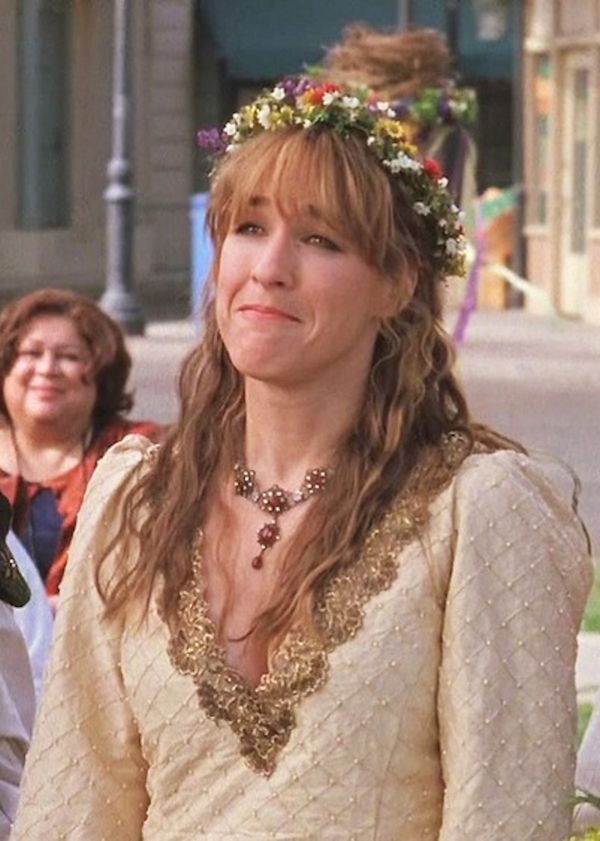 Directing and writing credits:
"Last Week Fights, This Week Tights" is directed by Chris Long, written by Daniel Palladino. This is Long's final directing credit after a long string of episodes starting in S2:

"Presenting Lorelai Gilmore" - Coming out ceremonies are patriarchal nonsense that no one should support. My hope for Emily Gilmore is that she has a feminist revolution in her 80s and realizes this.
"The Bracebridge Dinner" - Remember how happy Richard is after quitting his job? His blatant exuberance is one of the most realistic things about this show.
"Help Wanted" - Lorelai wears the most hideous belt I've ever seen.
"Haunted Leg" - The writers continue to force Chilton student government down our throats.
"Swan Song" - I certainly wouldn't want to date Jess, but I'd be lying if I said that I wasn't charmed his surly demeanor.
"A Tale of Poes and Fire" - I could see myself retiring and joining the Edgar Allen Poe society (more likely the Virgina Woolf society, tbh).
"Keg! Max!" - Alcohol ruins everything. No one ever broke a bunch of Hummels during a fist fight while on mushrooms.
"The Lorelais' First Day at Yale" - The Gilmores discover the coffee kiosk, the thing I'm most jealous of at fictional Yale.
"Chicken or Beef?" - If you think your life is sad, just visualize Dean's bachelor party. It looks much better now, doesn't it?
"Nag Hammadi Is Where They Found the Gnostic Gospels - Rory takes approximately 4 hours to eat a tiny crumb of Pop-Tart.
"Scene in a Mall" - I would put up with an insane amount of emotional manipulation in exchange for an all-expenses-paid shopping spree with Emily.

I don't have any new info on Daniel Palladino. This is his second "written by" credit in a row; I still don't understand how he found time to sleep during the "GG" years.

Most batshit crazy outfit:
Who is Chester and why is he wearing a skin-tight turtleneck? This character has no backstory, but it's safe to assume that he was voted "most unfuckable" in high school. I'm also perplexed by Lorelai's continued infatuation with triangle cup dresses; they make her tits look awful.

Most irritating Rory or Lorelai moment:
The only person Rory can think to call while stranded in New Haven is Dean? Bitch, please. Calling a dude you once dated and whining to him that you're stuck and need his help is manipulative as fuck. She knows he's married, and it's inappropriate to expect him to come running when she needs him. Unfortunately for us, Dean is highly susceptible to damsel in distress nonsense and not even remotely devoted to his marriage. These two morons deserve each other.

Graham Sullivan, the dude Emily tries to fix Rory up with, is likewise terrible. Are there no good men at Yale? They all remind me of the college bros with an endless supply of GHB in "Veronica Mars."

Number of times Rory or Lorelai treat their bff like shit:
Nada. Paris treats Rory horribly when she remarks on her "dry spell" and tries to set her up with Leonard Fleming. What the fuck, Paris? Rory is allowed to be without a boyfriend for as long as she wants. If she wants to die alone with her cats, having not left her house once in the past 15 years, that's her prerogative.

Best literary or pop culture references:
HOW MANY PLUGS FOR JANE MAGAZINE CAN THIS SHOW GIVE? As Rory walks around the deserted Yale campus at night, she tells Dean,

It's only hitting me now. My classes are done -- done. I don't have to think about Chaucer or Euclid or Kafka or Machiavelli for months. I can just think about Jane magazine and why did Uma wear that dress -- fun stuff like that.

If you Google "Jane magazine" and "Gilmore Girls," WiR dominates the top search results. How is no one else covering this hard-hitting news item from 15 years ago?

Stars Hollow weirdness:
Kirk is jealous that Miss Patty has chosen Chrissy, a child, as dance captain over him. As Lorelai reminds us, "Kirk has forty-three jobs." He's also a clerk at Doose's and a wedding DJ in this episode. The man never tires.

The other item of interest is Liz's sad bachelorette party stripper. He's performing in an empty diner in broad daylight to an audience of 4 middle-aged Avon ladies who only get drunk on the cheapest of chardonnays. I support all/any sex workers 100%, but this dude can do so much better than an afternoon gig in Stars Hollow.

Sharpest insult or one-liner:
Mrs. Kim has her issues, but she's a bad bitch at heart. She initially quotes Lorelai $90 for a vintage doorknocker but raises the price 55% when a request involving Lane is denied.

Mrs. Kim: Mail for Lane. I know you go to Luke's, where she works. If you could pass this on to her, I would appreciate it.
Lorelai: Mrs. Kim, hasn't this gone on long enough?
Mrs. Kim: Not for you to say.
Lorelai: She's your only child. I know you miss her. She misses you. Call her. See her. Don't avoid her.
Mrs. Kim: This is between me and my daughter.
Lorelai: Well, as your mailman, I hereby resign.
Mrs. Kim: Fine. It comes to $140.
Lorelai: You said ninety.
Mrs. Kim: Wrapping charge.

Yes, girl! Financially punish those who disagree with you. Dagny Taggart would approve.

Books mentioned/books Rory is reading:
Jess cleverly disguises Luke's self-help books with an issue of Punk Planet (RIP). This is good practice for when he decides to read "50 Shades of Grey" on the subway.

Best song of the episode:
I will always love the scene of Luke and Lorelai dancing to Sam Phillips' "Reflecting Light." Those two have such great chemistry during the early stages of their relationship. It's a shame to see it all dissolve when you-know-who makes an appearance.

Thoughts:
Luke can waltz! After 4 seasons of watching him drag his feet with Lorelai, our favorite grouchy diner owner finally makes some moves. After getting sucked into Liz and TJ's wedding prep ("The turkey leg guy knew that going into that bar violated his parole"), Luke dons a sharp suit and puts his bad attitude to rest for an evening. After his in-depth self-help workbook session, there's nothing this man can't do.

I love that we get to see Jess and Luke on a simultaneous self-improvement streak. The writers poke fun at the cheesy workbook titles and over-the-top suggestions but for once, the show defends their importance. When Lorelai spots "You Deserve Love" peeking out of Jess' bag, she jokes about its stupidity.

Lorelai: Those kinds of books are idiotic.
Luke: Not if they help people.
Lorelai: I can't believe you're not mocking this book, which is so pathetically mockable.
Luke: Maybe it's more pathetic if people don't try. And maybe he's trying. You ever think of that?

Maybe Jess would have tried sooner had so many people in his life not given him such a hard time. The same goes for Luke. This is toxic masculinity, people ... the idea that it's sad or pathetic for men to try to identify and express their feelings. I'm proud of both of these characters for recognizing their deficiencies and having the courage to work on them. For a show that typically makes fun of therapy and mental health issues, this is a big improvement.

While Jess' grand gesture to win Rory over doesn't work, he does have a quality moment with Luke that makes me long for a spin-off.

Jess: I want to pay you back ... all the money.
Luke: You don't have to.
Jess: I want to. And I appreciate it ... everything. The money, living here.
Luke: Well, it's good to hear, but I kind of knew that.
Jess: Yeah, but, in a relationship -- any relationship -- it's important to let the other person know you appreciate them so you don't create barriers that delay any hope for reciprocation.
Luke: I think I read that somewhere.
Jess: Yeah?
Luke: You're hoping for reciprocation? You got it. I'm here, Jess. I'm always here.

Instead of Rory's love triangle nonsense, I want more of these scenes.

The best part of this episode is clearly Liz and TJ's wild ass wedding. Did they give out mushrooms as party favors? Dave Gruber Allen is hysterical as the cheesy officiant who strums a guitar and sings shit like, "Wheelo, clue, mousetrap." What does any of it mean? I don't know! Drugs are the only explanation. Kirk, the wedding DJ, plays Kajagoogoo and takes the job as seriously as surgeon. He even uses the phrase "modest wriggles." If he wanted to, I think Kirk could rule the Renaissance fair circuit.

Remember those weirdos at LaDawn's bed and breakfast? Everyone at this wedding would totally vibe with them. They could all stay up late, eating turkey legs and singing "Gypsies, Tramps & Thieves." It's nice that Liz is getting her shit together but ... is she really? It's hard to be excited about her union with TJ, a man whose prepared wedding vows are simply, "I love you." With Liz as a mom, it's no wonder that Jess isn't living on the streets, sucking dicks for crack.