'Gilmore Girls' Season 3, Episode 17: A Tale of Poes and Fire 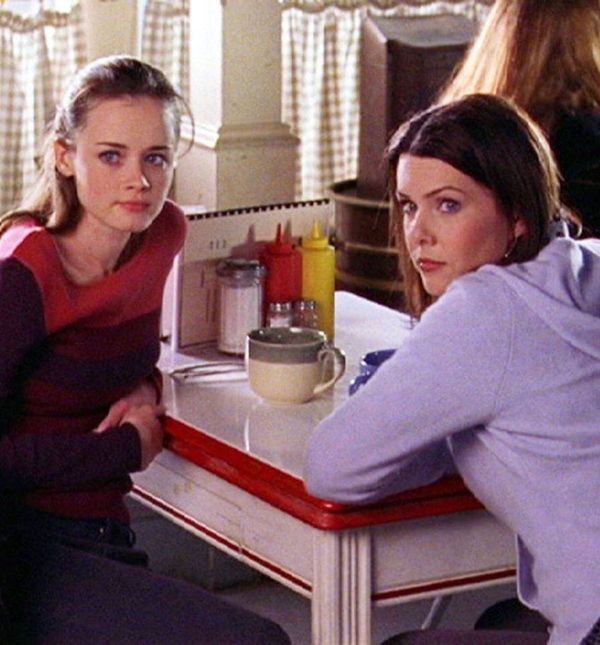 Directing and writing credits:
"A Tale of Poes and Fire" is directed by Chris Long, written by Daniel Palladino. Long has directed a few previous episodes:

"Presenting Lorelai Gilmore" - Rory participates in a disgusting, misogynistic debutante ball (complete with fan dance) while Christopher cements his status as fuck boy.
"The Bracebridge Dinner" - Jess asks Rory what she and Dean talk about and we never get a satisfying answer.
"Help Wanted" - We are reminded, for the thousandth time, that some of Lorelai's disdain for her parents is justified because they are dicks.
"Haunted Leg" - Chilton student government nonsense eats up the entire episode and I highly recommend skipping this one.
"Swan Song" - Rory proves how stupid she is when she fails to question Jess' lame black eye explanation. Hit in the face with a football? Please.

I don't have any male Palladino news for you. I did order this book, so maybe I'll have some gems to share after it arrives.

Most batshit crazy outfit:
I feel like I should change this category to "shiniest leather jacket." After the Poe reading, Lorelai and Luke twin in hideous outwear that deserves to be burned in a dumpster fire. They look like extras from "The Matrix."

Later, when Rory sleeps over at the Kim house, we see Lane's pajamas. I have a policy of never judging anyone on their sleep clothes, but holy shit. My husband asked, "Where do you even buy PJs like that? Did she raid a Victorian casket?" It's hard to capture their vibe in a photo, so I will just describe them. They have a high neck that is fastened closed with a lavender ribbon and a trail of tiny buttons (for keeping the virginity in). The sleeves have ruffles, the tits have ruffles ... everything has ruffles. The print is a tiny purple flower or star. They are a sight to behold.

Most irritating Rory or Lorelai moment:
I love how Lorelai browbeats Luke into letting her stay at his place, then casually mentions that she had a dream about being pregnant with his twins. You want to know why Luke has been pining for you forever and subconsciously sabotaging every recent relationship he's been in? BECAUSE OF THIS, LORELAI.

(She's not completely to blame because he's never clearly expressed his feelings, but it's still obnoxious.)

Number of times Rory or Lorelai treat their bff like shit:
Lorelai is too busy dealing with the ramifications of the fire to be a jerk to Sookie, and Rory is actually a good friend to Lane. She helps her realize that her fake relationship with Yiung Chui is not as innocent as Lane originally thought. Clearly, the dude is in love with her and rapidly turning into a stage five clinger. Run, Lane! Get out while you can.

Best literary or pop culture references:
As someone who was obsessed with "Lamb Chop's Play-Along" as a kid, I appreciate Lorelai's Shari Lewis mention. During Rory's sock puppet show, Lorelai walks up and says, "Hey Shari Lewis, how's the show going?" Let's be clear, though: Lewis (RIP) is a true talent and Rory is just a hack with a dirty sock on her hand.

Stars Hollow weirdness:
This is a Daniel Palladino episode, so of course it's full of weird, townie nonsense. Kirk has decided to rip off a guy in Portland and "print daily T-shirts featuring a humorous topical headline of something I witness around town." And let me tell you, the headlines do not disappoint! I've had a "Babette Ate Oatmeal" shirt in my Etsy cart for ages, just waiting for the right occasion to buy it.

After the fire at the Independence Inn, we're treated to a bunch of insanity from Babette and Miss Patty. Babette's computer knowledge is subpar at best:

"Hey Michel, I just hit F4 and the Num Lock key and the one with the little apple on it and it's freaking out like it's on acid or something."

We also find out that Miss Patty used to be Ricardo Montalbán's receptionist. She takes great offense when Michel informs her that her emergency headquarters greeting is too long. I could watch an episode filled solely with Babette, Miss Patty, and Kirk shenanigans and walk away 100% satisfied.

Sharpest insult or one-liner:
Lorelai talks too loud during the first Poe's recitation of "The Raven," so he makes a dramatic pause and serves her up with some quality side eye. Her reaction is pretty solid:

Lorelai: Busted by a Poe.
Rory: Hope he doesn't put a curse on us.
Lorelai: Or complain when he goes back to being Fred Larson, Tampa dentist.

Books mentioned/books Rory is reading:
"The Raven" and "The Tell-Tale Heart" are both mentioned, and we see a partial recitation of the former. Paris justifies her bedridden status to Rory by saying, "Proust wrote all three thousand pages of "In Search of Lost Time" in bed." I like the way she thinks. Lorelai gives Dickens a nod when she compares Rory's pro/con list to "Nicholas Nickleby." All of these books are referenced, but Rory doesn't actually read a single thing.

Best song of the episode:
There are no songs in this episode, just melancholic la-las.

Thoughts:
This is one of my favorite Daniel Palladino episodes. It has a good mix of townie action, plot development, and sassy dialogue. I like to shit on DP because he's created the most cringeworthy episodes of the show - "That Damn Donna Reed" and "A Vineyard Valentine" - but he's also behind some of the best. Aside from his movie, the topical t-shirt gag is my favorite Kirk shenanigan and the way it's used to announce Rory's college choice makes me smile.

At the end of the previous episode, Rory opens her mailbox to find three big envelopes; at the start of this episode, we find out that they contain acceptance letters to Harvard, Princeton, and Yale. Rory has been dreaming of Harvard since she was a little girl 🙄 but still decides to craft one of her traditional pro/con lists, just to be thorough. When Rory leaves for school, Luke tells Lorelai he has some good news about Jess, too. He was chosen as Employee of the Month at Wal*Mart and Luke is legitimately proud. Of course, when Luke actually shows up to the ceremony and talks to Jess, he expresses none of those feelings. Seriously, what is it with these men? One positive thing I will say is that they definitely make progress over the course of the show. Compare Jess and Luke's interactions in S3 with S6 and you'll see what I mean.

That night at the Poe reading, tensions run high. Lindsay whips Rory dirty looks left and right, and although Nicole lets Lorelai borrow her pen, she curtly says, "I'll need it back." I don't blame her for this because I hate when people permanently borrow my pens. I lost all of my Muji gel pens by lending them out to thieves and I'm still bitter about it. Rory and Lorelai are understandably bored because "The Raven" is long af and they have to sit through it twice. Thankfully, they have the pro/con list (and Nicole's pen) to keep them busy.

After the reading is finally over, there are two scuffles outside of Miss Patty's studio. The first is between the two Poes, who are clearly salty about having both performed "The Raven." They don't agree on historical facts and have a childish spat that ends with the second Poe ripping his wig off and walking away. Lindsay and Rory don't actually fight, but there is some angsty energy when the Gilmores stop to talk to Dean before heading home. Lindsay is unimpressed by Rory's Mark Twain magnet head reminiscence and has zero interest in chatting about college acceptance news. I admire the way she just unabashedly says, "I've gotta get home." It's coded language for "This conversation is boring, and I dislike you."

One of the things that bothers me about this show is the treatment of Lindsay. The writers make very little effort to give her any dimension and change her personality to make it suit their needs. In this episode and "Face-Off," she's kind of no-nonsense and cold to Rory but in E19 (Keg! Max!) she's nice and vanilla. Pick a lane, writers.

And don't even get me started on Dean. I recently finished the new season of "Bojack Horseman" and have come to the conclusion that Dean is basically Mr. Peanutbutter. He's a floppy-haired dumbass who is totally oblivious to his surroundings and too simple to correctly interpret human emotion. He is so dumb and boring that he makes Jared Padalecki (who is objectively attractive) seem repulsive. I don't know how Rory talks to him for even a second without ripping out all of her hair in frustration.

When the inn catches fire in the middle of the night after the Poe reading, Lorelai handles the situation relatively well. After everyone is accounted for, she takes advantage of Luke's kindness and uses the diner to prepare breakfast for all of the guests. I would happily cancel my Luke's order for "Sookie's famous blueberry-lemon pancakes, Belgian waffles, or bananas foster." With the help of the townies ("Ooh-hoo-hoo, we got cots"), she finds new accommodations for people who need to stay another night in Stars Hollow. She does everything she can to make the guests feel taken care of and although she looks tired, she never has a meltdown. She even somehow finds the time to collect enough Yale paraphernalia to cover Rory's walls after she makes the big decision.

I actually like how the end of the episode juxtaposes Rory's decision to go to Yale with Lorelai's realization that the Independence Inn is far more damaged than she initially thought. Both ladies are on the precipice of new beginnings. Lorelai's safe, steady job has suddenly been upended, and the life trajectory Rory always imagined for herself has taken a slight turn. For as damaged and emotionally fucked up as these two are, I'm proud of them for handling these curveballs.