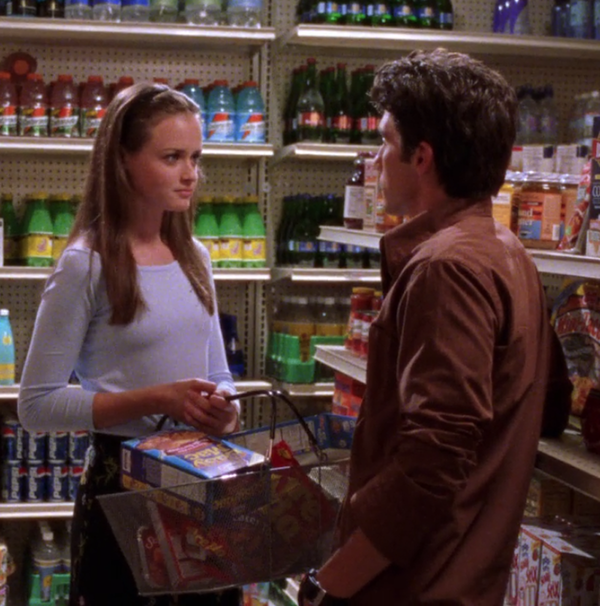 Directing and writing credits:
Directed by Chris Long, written by Amy Sherman-Palladino. You should remember Long from these previous episodes:

"Presenting Lorelai Gilmore" - One of the whitest episodes of the show. Rory "comes out" to society as ... a young lady, I guess? Emily is pleased, Lorelai is horrified, and Dean wears a tux with tails and a pair of gloves.
"The Bracebridge Dinner" - One of the central mysteries of the show is discussed: the content of Rory and Dean's conversations. Unfortunately, we are not given a satisfying answer.
"Help Wanted" - Rory loses her shit when no one believes her about Jess, Lorelai helps Richard start his new business, and Lane meets Sophie and discovers her true passion.

If you're interested in reading more about ASP (and other female showrunners), I recommend checking out "Stealing the Show: How Women Are Revolutionizing Television" by Joy Press. I just started reading it and am enjoying it so far. I hate to admit it, but I got a Kindle for Christmas and it has made reading so much easier. I still prefer to read physical books most of the time, but when it comes to reading in bed without waking up my husband, the Kindle can't be beat.

Most batshit crazy outfit:
I know I shouldn't judge house clothes, but Rory's bright pink robe looks like it's made from the cheapest, most flammable material on the planet. There's no way in hell that $9.99 piece of shit is comfortable.

All of Lorelai's tops give her trapezoid boob and I don't understand why the costume department continues to put her in deep v-necks. The most egregious thing she wears is this midi dress that looks like an Anthropologie duvet cover on crack: 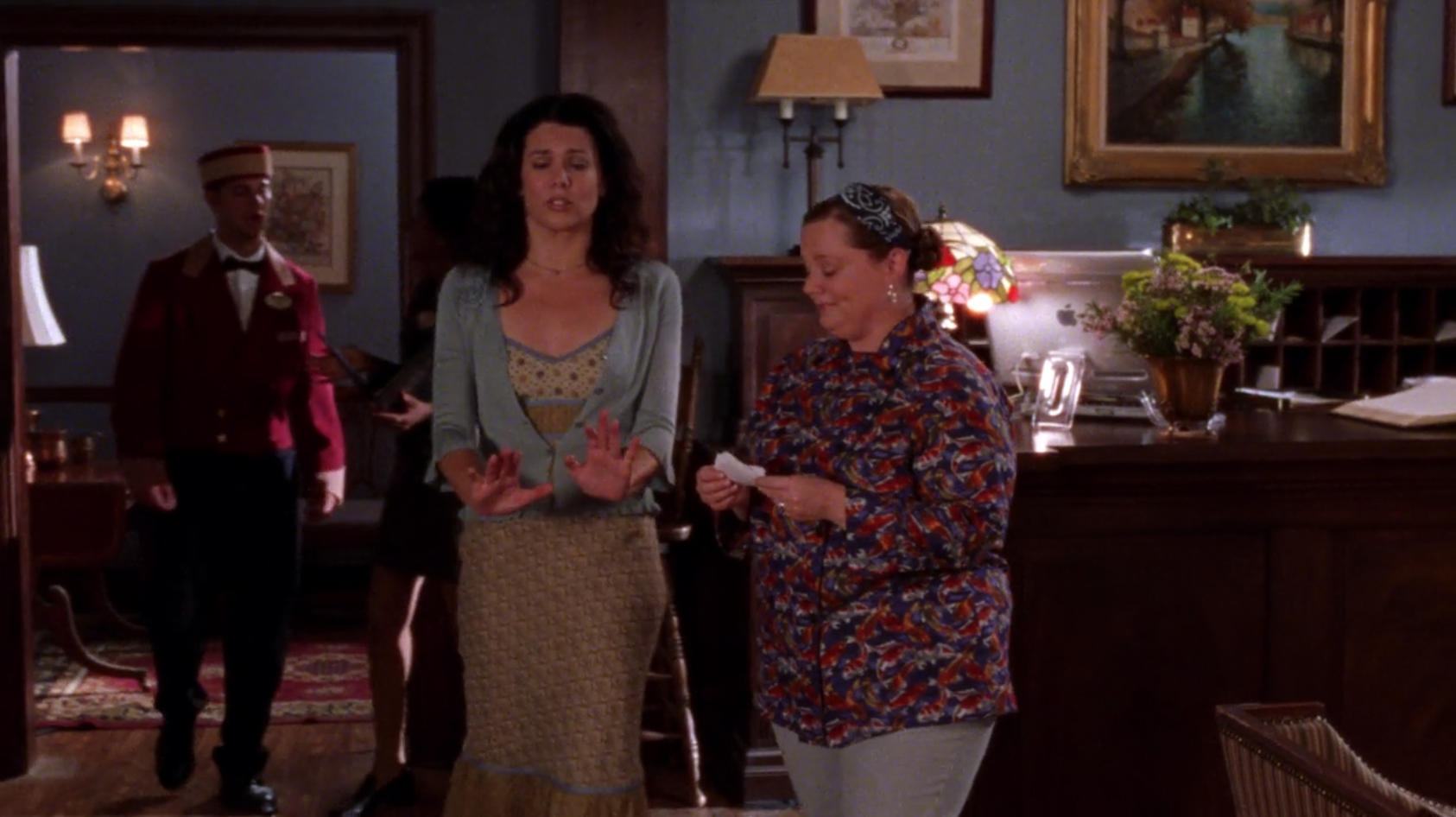 Why are there so many fucking ruffles? The bottom of the cardigan is ruffled and there are not one, but TWO, tiers of ruffles on the dress. Why hasn't anyone nominated Lorelai for "What Not to Wear"? Stacy and Clinton would rip this trainwreck apart.

Most irritating Rory or Lorelai moment:
The way Rory treats Jess is unacceptable and I'm glad he called her out on her bullshit. After a summer in Washington with zero contact, she expects Jess to be ready and available for whatever she wants upon her return. She's still in a relationship with Dean and hasn't expressed any interest in Jess since Sookie's wedding. She has no right to be angry because he's found someone new. 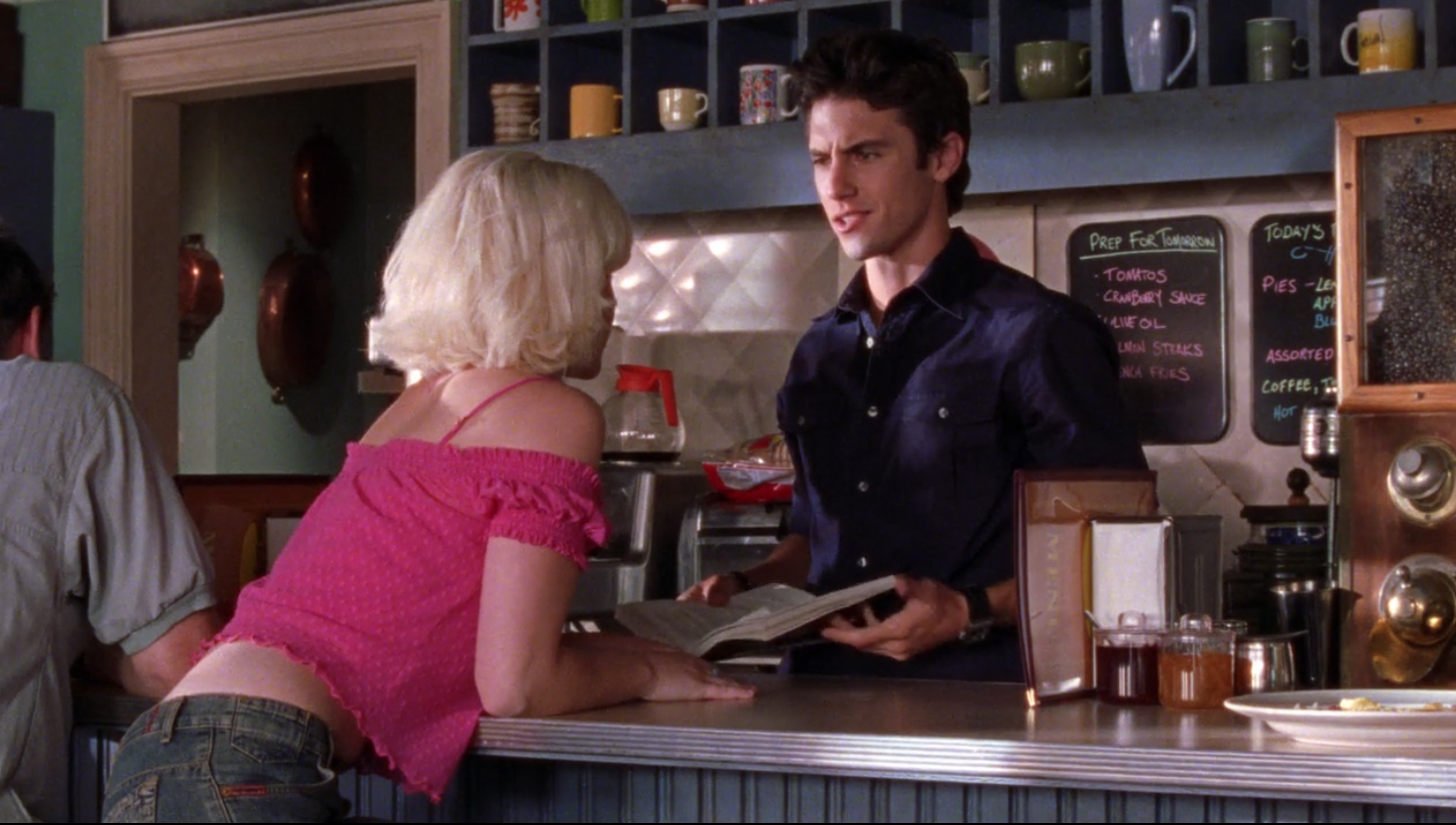 So far, Rory has only made fun of Shane's name but she'll soon move on to slut-shaming. Don't worry, we'll discuss it in detail when the time comes.

Number of times Rory or Lorelai treat their bff like shit:
Nada. Lorelai actually prevents Sookie from sabotaging a group of vegetarians, which is surprising. Lorelai has no respect for other people and their life choices, so her considerate attitude toward the Lasanos is unexpected.

Best literary or pop culture references:
Luke doesn't even try to pretend his Caesar salad dressing is homemade. Emily thinks all diners are garbage, but never even considers that one would use a store-bought condiment. These lines are perfectly in character.

Luke: You two ready to order?
Emily: Yes. How is your Caesar salad dressing prepared?
Luke: I’ll have to call Paul Newman and ask him.

At least it's Paul Newman and not Hidden Valley. Luke has some standards, dammit.

Stars Hollow weirdness:
Kirk asks Lorelai out on a date in a way that's somehow both sweet and creepy.

Kirk: We’ve known each other for a good amount of time now. Our, uh, paths have crossed professionally and socially a number of times, all with relatively pleasant results, and well, I was just wondering if you would like to have dinner with me?
Lorelai: Oh.
Kirk: In two weeks.
Lorelai: Two weeks?
Kirk: I heard you have a cold. I think two weeks is enough time to ensure the virus is out of your system.
Lorelai: Well, Kirk, I –
Kirk: You don’t have to answer me right away. I know that this is completely out of the blue for you. Take a few days and think about it.
Lorelai: Kirk, wait.
Kirk: By the way, I think you might be the prettiest girl I’ve ever seen ... outside of a really filthy magazine.

It's interesting to me that Kirk is the town joke, but Lorelai doesn't want to hurt his feelings and spends time/energy trying to think of the kindest way to reject his offer.

Sharpest insult or one-liner:
The opening scene is fantastic and I die at Emily Gilmore's "At least she had a husband to kill" retort. By Emily Gilmore's code of conduct, killing your husband is more respectable than having no husband at all.

Best song of the episode:
No music, just the sound of a bunch of idiotic people making disastrous life choices.

Thoughts:
This episode is boring as fuck thanks to all of the Chilton student government drama that no one cares about, but it features solid performances from Lauren Graham and David Sutcliffe. The Season 3 storyline with Francie is one of the most offensively bad subplots the "GG" writers have ever brought us. I understand that each season is 20+ episodes and that they need additional storylines to keep things interesting, but why this? I'd rather see more scenes of Rory and Dean's relationship slowly disintegrating or watch Richard and Emily fight about maids/rich people problems. 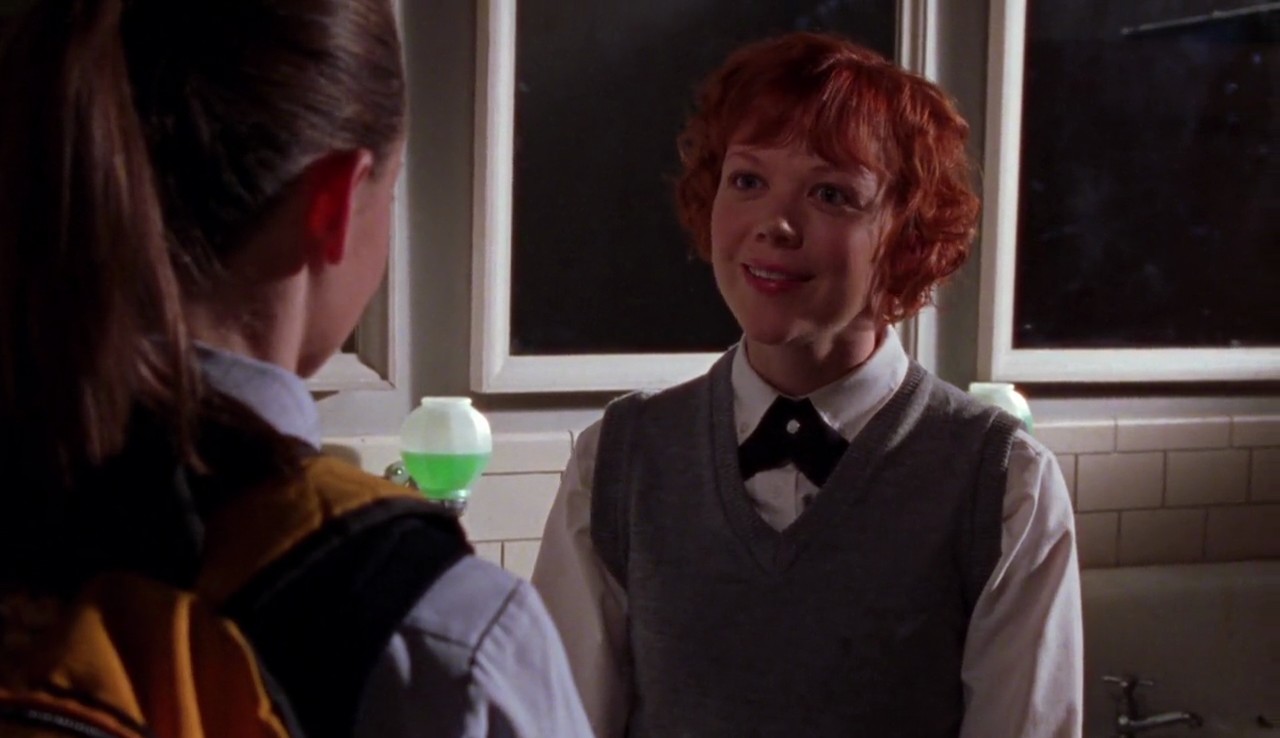 The only intriguing thing about this scene is the soap dispenser.

I do like that we get to see Lorelai grapple with the fallout from Sherry's unexpected pregnancy for a few episodes. In a way, I understand where Emily's coming from when she meets up with Lorelai at the diner and attempts to talk her into a reconciliation.

Emily: Oh, I certainly wasn’t going to just sit by and watch this situation explode. You two belong together. It took you years to figure that out, and now that you finally have it, you can’t let it go away just because of a little complication.
Lorelai: Mom, his girlfriend is pregnant – that is more than a little complication.
Emily: Women have gotten pregnant since the beginning of time, Lorelai.
Lorelai: And before I result to the totally called for duh, please tell me what your point is.
Emily: This woman is trying to trap him. Don’t you see that? You can’t let that happen.
Lorelai: Mom, this is none of your business.

The comment about Sherry attempting to "trap" Christopher is totally misogynistic and wtf, but everything else rings true. As I stated in the Season 2 finale, I don't understand why Sherry's pregnancy automatically signals the end of Christopher and Lorelai's romance. There's no rule that dictates two people must be in a relationship in order to successfully raise a child together. It's complete lunacy!

But both Christopher and Lorelai don't see it this way at all, which I guess is a result of hindsight from their experience with Rory. They weren't together for most of Rory's life and therefore, she grew up primarily without a father. Sherry's pregnancy gives Christopher a chance to do things differently, to live up to his end of the bargain. As much as he wants to be with Lorelai, he also must understand deep down that Lorelai wouldn't want to be with the type of guy who abandons the mother of his child in a time of need. Lorelai wants to be with the grown-up version of Christopher, the one who has a Volvo and a job. Taking care of his soon-to-be new family is part of that responsible new identity. It's a catch-22.

When they fight at the end of the episode, Christopher proves how immature he still is.

Christopher: Do you think I like this situation?
Lorelai: Oh God.
Christopher: Do you? I mean, after what you and I had going and now –
Lorelai: Chris, do you remember why we’re here right now? What event in your life caused this very pleasant moment we’re sharing?
Christopher: That has nothing to do with this.

After getting someone accidentally pregnant once, you'd think Christopher would have thoroughly researched the basics of reproductive health, but nope ... this dude will continue to be lackadaisical and then whine about his circumstances as if his actions didn't directly cause them. What a fucking moron. If you don't like the situation, then learn how to use a goddamn condom. Ask your partner if she's on birth control before you start fucking her. It's not complex.