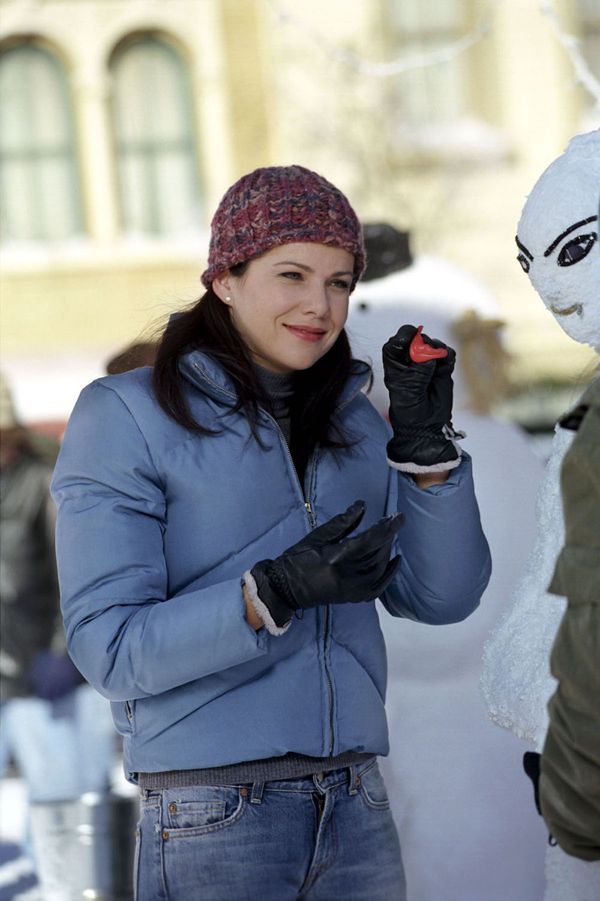 Directing and writing credits:
This episode was directed by Chris Long, who has directed a number of my favorite "GG" episodes, including "A Tale of Poes and Fire" and "Nag Hammadi is Where They Found the Gnostic Gospel."

Daniel Palladino wrote this episode, so as Lindsay has previously noted, you know it's going to be an ensemble episode of Stars Hollow-y goodness.

Most batshit crazy outfit:
For once, I'm awarding this to someone other than Lorelai or Rory! And before you think, "Come on, you can't fault the Bracebridge costumes for being batshit crazy," don't worry, I'm not picking on period dress. I'm picking on Sookie. She's quirky and colorful, so I allow for many sartorial slides, but when she pairs a plaid shirt that looks like my grandparent's sofa with a fuzzy brown sweater that has a scarf built in, I have to call shenanigans. 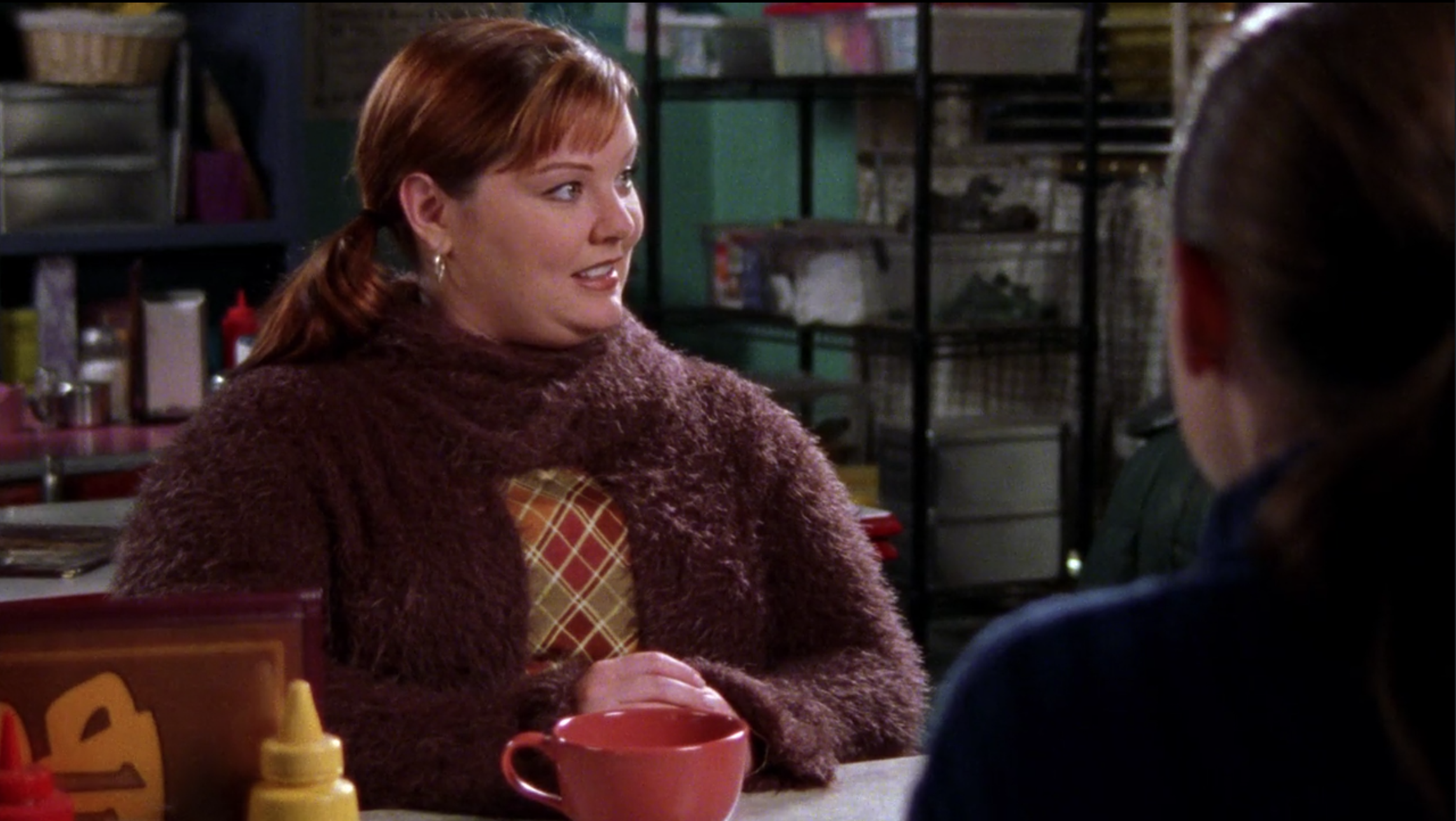 This is not okay, Sookie.

Most irritating Rory or Lorelai moment:
Mike: "There were so many. Every time Lorelai opened her mouth."

While I wouldn't go quite that far, her rant about Rory potentially spending time with Christopher during the holidays was a serious low. More on that later. Oh, and cool it with the mental illness jokes. I wouldn't say there's never a place for it, but Lorelai takes serious liberties.

Number of times Rory or Lorelai treat their bff like shit:
For as shitty as Lorelai is in this episode, she's at least not shitty to Sookie, and Rory is actually a good friend to both Lane and Paris.

Best literary or pop culture references:
The Björk snowwoman is, as the youth say, everything, and I am here for it.

Stars Hollow weirdness:
This episode is full of so much Stars Hollow weirdness. An intense snowperson building contest. Everyone's willingness to come to the Bracebridge Dinner. Miss Patty's love of men in any uniform. My favorite is actually that which sadly goes unseen: The drunken antics of Bootsy, who sang "Hotel California," and Jackson, who accompanied him by playing drums on his stomach.

Sharpest insult or one-liner:
"Like a young Tammy Faye Bakker." At any age, TFB terrifies me.

The "Joy-less Luck Club" may not be sharp, but it is one I have used many times.

Books mentioned/books Rory is reading:
Paris is reading "The Iliad" for the third time, but Rory is once again bookless.

Best song of the episode:
This one is obvious, but what a great use of Björk's "Human Behavior."

Embarrassingly, as soon as it came on, both Mike and I start clamoring, "WHO SINGS THIS? I love this song and know this voice but WHO IS IT?" Finally, Mike realizes, "Oh, it's Björk."

Thoughts:
This is one of my favorite episodes of "Gilmore Girls." It is fun and whimsical and makes great use of the entire cast. There's fantastic Rune and Michel banter, beautiful scenes from the town, and a Prince reference from Paris. Three things really stand out to me:

First, it gets to the heart of one of the great mysteries of the show.

Jess: Hey, what do you and Dean talk about?
Rory: What?
Jess: I mean, does he know Björk?
Rory: I've played him some stuff.
Jess: Hm. So you got a teacher-student thing going?
Rory: Stop.
Jess: No, really, I'm curious. What do you guys talk about?

Us too, Jess. Unlike Jess, we've gotten to witness many of these conversations and can confirm that it is, in fact, a student-teacher thing. Rory suggesting books, movies, and music. Dean complaining about her being busy. Dean talking about pizza. Dean changing a water cooler. He got points for the hair for awhile, but Jess has him beat there, too.

Now, let's talk about Lorelai's fucked up reaction to Christopher's request to see Rory over the holidays. There is a code among people co-parenting with exes who are not always great at it. Don't talk shit to your kid. Don't prevent your kid from seeing them. Don't force your kid to see them. In other words, respect your children's autonomy and keep the path clear for whatever relationship they do or don't want. (Even Luke demonstrates an understanding of this!)

At times, Christopher has been a shitty dad, but far from the worst. He has taken steps to get his life together and to make space for Rory, literally and figuratively. He has shown respect for Lorelai as a co-parent by asking her how she feels about the situation, rather than going directly to Rory. And how does Lorelai react to his maturity? By hiding the invitation from Rory.

When Rory brings up that it's weird they haven't heard from him, Lorelai loses her shit in a rant about how sucky it is that he would even deign to want to spend time with her this time of year.

So now, Rory goes from feeling bummed that her dad hasn't bothered to call, to having to reassure Lorelai that she's the favorite parent and making an awkward choice. This is an excellent way to ensure your child has difficulty in their future relationships. (Spoiler alert: She does!)

Luckily, Emily and Richard modeled some relatively healthy behavior in this episode. After months of misery at his job, Richard arrives for the dinner downright bouncy. He confesses at dinner that he has retired ... without telling Emily. While this is decidedly not healthy, his apology to her is exactly what an apology should be: Explanatory and sincere, thoughtful and honest, and includes the words, "I'm sorry," which a surprising number of apologies don't.

Mike: "The grandparents are the only reason to watch this. Everybody else seems like a robot spewing out lines that were poorly written." 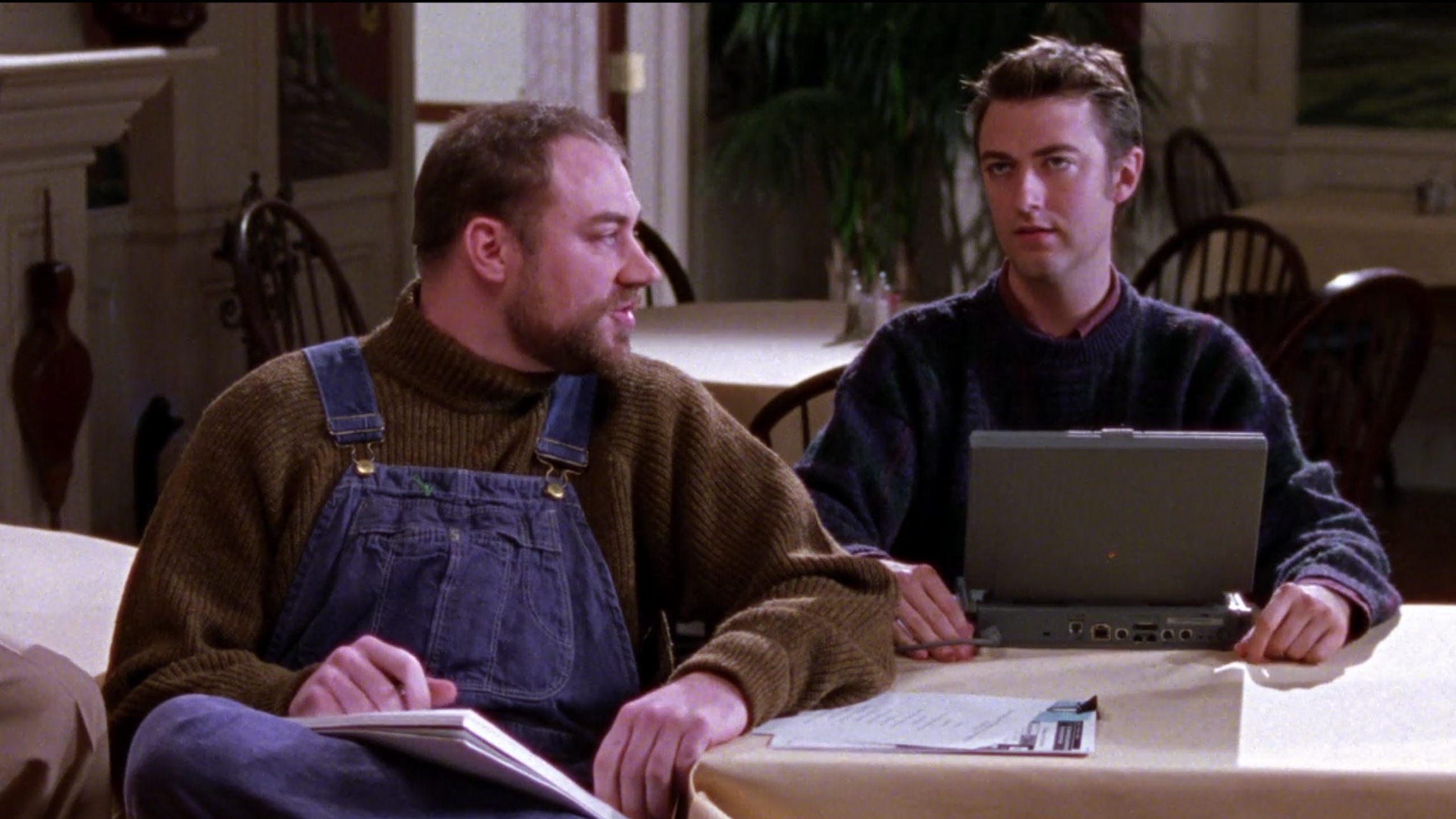 Mary Bono is a babe, so it makes sense.