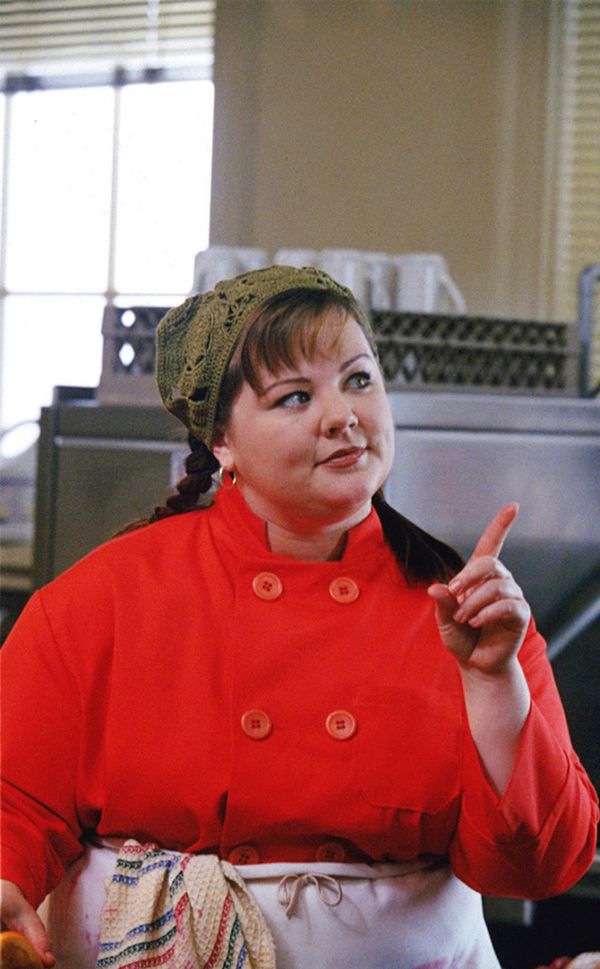 Directing and writing credits:
ASP and Daniel Palladino wrote this episode. While I loathe most of the plot, I enjoy the writing and their use of the Stars Hollowites. Hollowians?

This episode was directed by Michael Katleman. He directed seven episodes of "GG" and some of my favorite episodes ("Christopher Returns!" "Nick & Nora/ "Sid & Nancy!"). He seems to jump around from show to show, directing a handful of episodes before moving on.
​
Most batshit crazy outfit:
It feels too obvious to pick on Rory’s Oompa Loompa meets Alice Nelson getup, so I won’t. To be honest, it’s also not the worst attire on the episode. That award goes to Lorelai, who wears some of the most hideous shirts I’ve ever seen in this episode.

Is that a tie-dyed, printed and bedazzled option she’s wearing to her friend-date at Luke’s? You bet! Where does she keep finding these?

Then there’s the short-sleeved turtleneck sweater that appears to be the result of a yarn factory explosion, the butterfly print blouse she wears to Friday night dinner, the red shirt with the white graphic print that she wears on two separate days, and the shiny black blouse.

If ugly-Lorelai shirts were a drinking game, this episode would kill you.
​
Most irritating Rory or Lorelai moment:
Lorelai: You know this is only like the second night we’ve ever spent apart. Doesn’t that make you sad?
Rory: Yeah, but I’ll get over it.
Lorelai: Uh-huh. Well Paul and Linda McCartney only spent 11 nights apart their entire relationship! Did you know that?
Rory: I did not know that.
Lorelai: Well they were truly devoted to each other. Just the being apart was too painful to even talk about... I don’t think that Linda would’ve even considered cat-sitting without Paul.
Rory: You know mom, when I go off to college, I’m gonna be gone every night. What will you do then?
Lorelai: Well I will go with you. I will sleep on the floor in your dorm next your bed.

If you’re ever teaching a Psych 101 class and need to explain co-dependency, just show this clip. Also, can we talk about the fact that this ended up being some seriously disturbing foreshadowing for Rory’s first night at Yale?!

Number of times Rory or Lorelai treat their bff like shit:
None! Lane and Sookie both have short scenes in this episode, nothing remarkable. Arguably weird that Lorelai won’t admit to Sookie that she has a crush on Luke, but later admits it to Emily.

Best literary or pop culture references:
Lorelai: Alright, I’ll name him. Hi, your name is Stanley. Hi Stanley.
Rory: It’s a girl.
Lorelai: Oh, sorry about the Stanley thing. Your name is Stella. Stella is nice and Stella was married to Stanley.

I love a good “A Streetcar Named Desire” nod. Her (embarrassingly awful) Brando impression later in the episode suggests her frame of reference isn’t quite literary, but this episode is so lacking in smarts that a critically-acclaimed film based off of a Pulitzer Prize-winning play may be the best we can hope for.
​
Stars Hollow weirdness:
Some would say Babette describing her recent kitten acquisition as “a new baby” is weird, but those people would be wrong. That is exactly how you describe a new kitten!

What is weird is the behavior of the town when Luke gives in to Lorelai’s demands to paint the diner. Taylor’s tirade about zinnia pots and peppy pigs is fitting. I’ll even grant that dragging Kirk in to settle a bet over whether or not Luke is actually sprucing is quirky, but fun.

Having Andrew run in to take stealth “before” pictures is definitely pushing the line into "Twilight Zone." Also, Luke and Lorelai don’t seem to recognize him as Andrew, but Sookie later mentions him.

But my favorite SH weirdness is when half the town (presumably the beautification committee) smash up against the windows at Luke’s because even with pictures, they need to see the monumental event that is Luke picking out paint colors for themselves.
​
Sharpest insult or one-liner:
And the award goes to Dean, who responds to a question about what time he starts work with this nonsense: “No, 4:00 on Thursdays. For some reason Thursdays are really busy. Lots of oppressed house wives shopping for their husband’s dinner.”

You mad bro?
​
Books mentioned/books Rory is reading:
None, which isn’t a huge surprise, since Rory isn’t exactly trying to be smart in this episode. Technically, Richard tells Rory he’ll bring her a nice edition of Cervantes from Madrid, but he’s an author, not a book. It’s as close to literary as this episode gets. (See above for commentary on the “A Streetcar Named Desire” references.)
​
Best song of the episode:
The song playing when Dean arrives (presumably from the “weird” CD she borrows from Lane) is “Flower Girl from Bordeaux” by Esquivel, aka Juan Garcia Esquivel. He was a Mexican band leader, pianist, and composer, and is apparently called “The King of Space Age Pop.” To be honest, I’m surprised Lane didn’t have a category more fitting than “Miscellaneous.”

It is worth noting that I have been listening to “Space-Age Bachelor Pad Music,” a compilation of Esquivel’s music, all afternoon, and it’s a stellar work/writing soundtrack. (The internet tells me it also pairs great with mushrooms. Which I realize makes me sound like I tried it with mushrooms, but I swear, I’m not that much fun.)
​
Thoughts:
Let’s start with the easy stuff. This is a great Luke and Lorelai episode. Their conversation in the diner over beers is perfectly written, and that scene with the two of them on the floor in the diner, peering out behind the counter? Oh, hello.

I am perturbed by the whole “the chick is a cover” feeling that both Luke and Sookie have. I get it. We weren’t so sex positive then, at least not in Standards and Practices. So while I’d love to see a TV show portray it being cool and normal for a woman to be able to invite someone over without a cover and some enthusiastic consent, I’ll overlook it.

But assuming that you are going to create a sex cover, “Come help me find my chick!” is about as lame as they get! There is way too much work required to fake that. “I think there’s a bat” is pretty great. Impossible to disprove, plausible, but easy to dismiss. “I think I lost my daughter’s chick” isn’t one you can really back out of if things don’t go well.

I digress. These issues are small potatoes next to the heaping pile of mashed ones Rory serves Dean.

This episode has haunted me for a really long time. It opens with Lorelai and Rory making fun of "The Donna Reed Show." Dean bristles.

“I don’t know, it all seems kind of nice to me... families hanging together, I mean, a wife cooking dinner for her husband. And look, she looks really happy. What if she likes making donuts and dinner for her family and keeping things nice for them and...I feel very unpopular right now.”

And thus, the episode asks the age old question: What if some women genuinely want the Donna Reed lifestyle?

The problem is that this episode does nothing to answer it. In their fight the next day, Dean points out that his mom used to make dinner for their family every night and still does on the weekends. Rory shoots back that it’s her choice. Dean gets huffy.

The solution to their fight? Donna Reed night, in which Rory dons a Creamsicle-themed outfit and makes Dean dinner at Babette’s. She lights candles, makes dessert, laments that she forgot the rolls, and goes so far as to refuse to let him help with the dishes.

Even when Dean points out that he doesn’t want her to be Donna Reed, she immediately says how much fun she had and that she’d do it again. Apparently, when she researched Donna Reed, Rory learned that, “...she was an uncredited producer and director on her TV show, which made her one of the first woman TV executives. Which is actually kind of impressive.”

First of all, Rory, it’s very impressive, and secondly, that she was uncredited proves the point that it was misogynistic bullshit! You can acknowledge your respect for women who choose a path other than the one you see for yourself without minimizing you own beliefs.