Directing and writing credits:
"Scene in a Mall" is directed by Chris Long, written by Daniel Palladino. Both of these dudes are no strangers the Stars Hollow universe. Long has directed these previous episodes:

"Presenting Lorelai Gilmore" - Rich white people nonsense, blah blah blah.
"The Bracebridge Dinner" - Björk's "Human Nature" blares as the Gilmores ride through Stars Hollow in a horse-drawn sleigh.
"Help Wanted" - We are reminded that Lorelai's shitty attitude toward her parents is rooted in legitimate grievances.
"Haunted Leg" - This episode serves zero purpose aside from reminding me that Easy Mac is a thing.
"Swan Song" - I know it's inappropriate, but I would support an Emily/Jess romance.
"A Tale of Poes and Fire" - Kirk proves time and again that he is the best character on this show. I would 100% buy a topical t-shirt from his hypothetical Etsy shop.
"Keg! Max!" - Lane gets drunk on one beer and Jess proves he doesn't know a motherfucking thing about consent.
"The Lorelais' First Day at Yale" - College Paris is the best Paris. I live for her craft corner and sessions with Terrence.
"Chicken or Beef?" - If your bachelor party consists of "a case of beer in the JCPenney parking lot, then batting cages and laser tag," you are too young to get married.
"Nag Hammadi Is Where They Found the Gnostic Gospels - "Got a handful of Barbie.

This isn't one of my favorite D. Palladino episodes, but the writing is solid. Emily Gilmore's department store meltdown is a gd master class.

Most batshit crazy outfit:
I'm not sure why it's so hard for wardrobe to figure out what to do with Liza Weil's boobs. Instead of showcasing them in a tasteful way, they're always stuffed into some tight, hideous sweater with a weird neckline. I'm also perplexed that they would put someone who is 5'4" in an a-line midi skirt (those diagonal seams!) with high boots. Her proportions are chopped up in a way that makes her look stocky and shapeless. The hair is likewise wtf. You know it's bad when Rory, who is clearly wearing something right of the Ann Taylor Loft sale rack, looks like a fashion genius in comparison.

Most irritating Rory or Lorelai moment:
I don't know what I find more grating: that Lorelai thinks her whole "install a fax line, loan me money" schtick is cute or that Luke is 100% susceptible to it. Additionally, I wanted to punch Rory when she patronizingly explained the definition of "skint" to Lorelai. Shut the fuck up, Rory. Literally no one on the planet thinks you're cool.

Number of times Rory or Lorelai treat their bff like shit:
Rory is appropriately excited for Lane when she hears the apartment news. Sookie is MIA (probably shoving a turnip up Jackson's butthole).

Best literary or pop culture references:
As they glide down the mall escalator, Lorelai spots her mother going up on the other side.

Lorelai: Emily.
Rory: Emily who?
Lorelai: Emily the Strange, with the black cat and the boots made for kicking. Who do you think?

It surprises me that this show references Emily multiple times (RIP Casty). She seems a little dark for the Gilmores.

Stars Hollow weirdness:
After Kirk's great success with Buster (Lulu's dog), he decides to start a petsitting business. When we first see him in action, he's lunging down the sidewalk with 7 leashed dogs (not including Snuggles, the little potato who is loose and tracking the pack). At one point, he tries to guess a dog's name by making random noises that remind me of that obnoxious scene from "Garden State." My favorites roughly translate to "dooknap" and "bleeblo."

Sharpest insult or one-liner:
John Cabrera (Brian) doesn't get a ton of dialogue but has some of the best line readings. Instead of playing this scene with mild outrage, he goes for dejected melancholia:

Lane: There are no curtains on the windows! People can see right in.
Brian: What if we're naked?
Zack: Please, never be naked.
Brian: I try not to be.

All of the Brian details are pitch-perfect, including the "Futurama" action figures and desire for a nightlight.

Best song of the episode:
The soundtrack is eerily absent. How dare they deprive us of jaunty shopping music.

Thoughts:
The episode opens with Kirk illicitly bringing his dogsitting charge to the diner in a large pink and white purse. Luke, massive fan of homophobia, refers to it as a "gay bag." As Kirk softly coos into his purse, Lorelai emails Rory on her laptop, enjoying how much the dangling cords annoy Luke. Despite this irritation and many previous instances of it, Luke decides to give her the $30k she manipulatively asked for last episode. Don't worry, these two will be sleeping together soon.

At Friday night dinner, Lorelai is surprised to hear that Rory is sick and won't be making an appearance. Thanks to the brevity of email, their once beautiful relationship is fizzling (heavy sarcasm). Due to her lame cold, Rory misses out on dinner at Bastide (Lettie burned the entree) and a fun conversation about which members of the Beatles are still alive. Emily and Richard have apparently decided that "John and Keith are dead. Paul and Bingo are still kicking." We unfortunately don't get to hear the entire conversation, but Lorelai gives Rory a reenactment over the phone. On the same call, they make plans to play hooky and spend the following day at the mall. Shopping is a weird activity idea for two broke bitches, but Lorelai spins some nonsense about how "it'll be like we're in an old movie." Sure, Jan.

When they meet at the inn pre-mall trip, we're forced to endure a scene with Rory and Dean. There is some awkward flirting before Lindsay and her mom show up with a tablecloth, hot lunch, and internalized misogyny. These are the white women who voted for Trump, right? Lindsay does say she's "really into the environment," so maybe I'm wrong about her. I can't wrap my head around the type of person who graduates from high school in 2003 with zero ambition outside of serving her husband and becoming a mother. Even Emily Gilmore has hobbies and friends (like Eunice Pierpont Pennington)!

After walking around the mall for a hot second, Lorelai and Rory quickly realize that window-shopping sucks dick. Too depressed to carry on, they resort to accosting the pretzel man for free samples. I worked at Auntie Anne's in high school and their behavior gave me PTSD flashbacks. These vultures need to take one sample and leave poor Howard alone. Luckily,

The whole ordeal is boring until the girls run into Emily, who is in the midst of a wild shopping spree/mental breakdown. For whatever reason, Rory and Lorelai are incredibly resistant to free luxuries like diamond watches and Manolo Blahniks. Who cares if there are strings attached? I'd happily attend Friday night dinners for the rest of my life in exchange for Balenciaga combat boots.

After making a scene in the shoe department, Emily is carted off to the food court for Moe's Moroccan Palace and an orange julius. Richard's new job/cocaine dealer mustache are throwing her for a loop and shopping is her coping mechanism (something I relate to deeply). Emily is a cautionary tale for Lindsay. She gave up her whole life to take care of Richard and now, in his 60s, he's too busy "club hopping with Moby" to pay much attention to her. This is what Lindsay has to look forward to if she continues cramming herself up Dean's ass 24/7.

The best scene of the episode is when Lorelai fields a call about the inn and forcefully negotiates a mild crisis.

Emily: You were very forceful.
Lorelai: Was I?
Emily: Very in command. I like how you handled it.
Lorelai: Well, I learned from the best.
Emily: From whom?
Lorelai: From the lady eating her hamburger with a knife and fork. That's whom.
Emily: Oh, please. I order maids and salespeople around. That's different. I've never done anything.

Does Emily have low self-esteem? This rare moment of vulnerability makes her significantly more nuanced and even puts her maid situation into different perspective. Maybe she fires them because it gives her a taste of power ... a glimpse into what her life might be like if she were a corporate lawyer or high-powered executive. She'll never have the chance to command a board meeting, so ordering around household staff is her lukewarm substitute.

The final image before credits roll is of Emily and Richard, eating dinner together at separate ends of the table. She asks if he likes the glass apples in the center of the table and he replies, "Oh. I've always liked those." Emily has dedicated her entire life to perfecting the Gilmore residence for a person who doesn't even notice her efforts. It's no wonder that their relationship rapidly disintegrates over the remainder of S4. 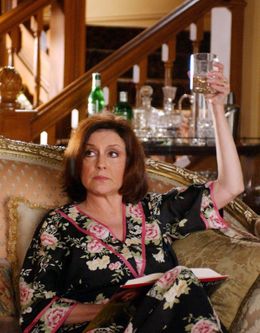 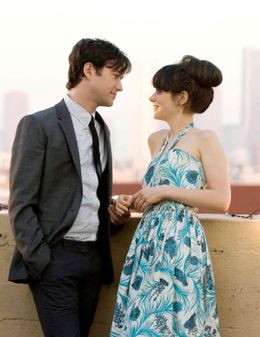