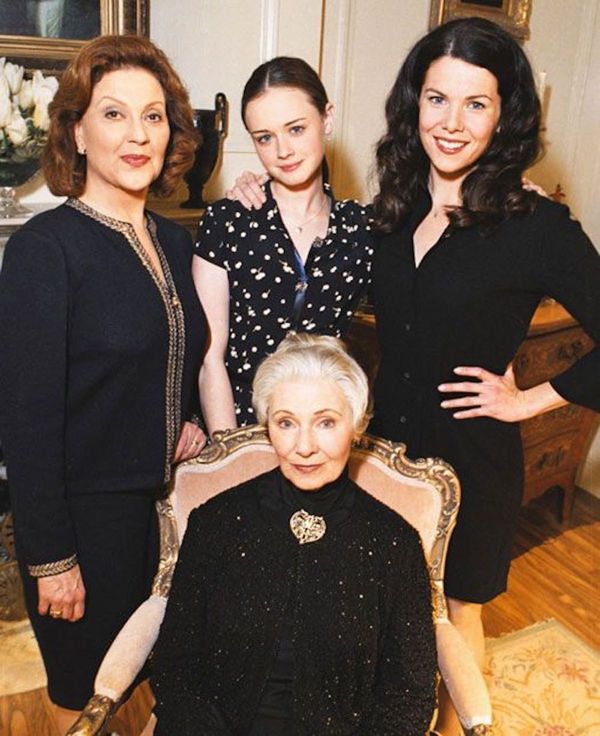 Directing and writing credits:
"The Incredible Sinking Lorelais" is directed by Stephen Clancy, written by Amy Sherman-Palladino and Dan Palladino. Clancy worked on "GG" as a camera operator since S1, but this is his directorial debut. His IMDB page is a little boring, but it did teach me that "Private Practice" isn't the only "Grey's Anatomy" spin-off; a show called "Station 19" also exists.

This is the second episode directed by both Amy and Dan. The first is "That Damn Donna Reed," the one where Rory dresses up like a 1950s housewife and presumably gives Dean the hardest boner of his life.

Most batshit crazy outfit:
Shockingly, no one makes any truly heinous choices. I don't love the peekaboo sleeves on Lorelai's tight brown "luncheon" dress, but this is a minor complaint considering her past transgressions. The ratty hair with an unintentional ombré has got to go, though. As always, none of Jason's suit jackets fit properly and his tie choices continue to disappoint.

Most irritating Rory or Lorelai moment:
This episode is overflowing with obnoxious behavior. What irks me the most is probably Rory's class schedule meltdown. It's not like they're putting her on academic probation or telling her that the D she received on her ethics paper is permanent. She can fix all of her problems by simply dropping one class and continuing on with life as usual. Her (fake) tears are completely unwarranted and the result of self-imposed pressure.

Number of times Rory or Lorelai treat their bff like shit:
For once, the tables turn and Sookie is a shit friend (and business partner) to Lorelai. Apparently, this bitch thinks she gets to be co-owner of the Dragonfly without doing any tasks that aren't directly related to cooking. She insists that she must be on-site to oversee some fancy sink's arrival and then doesn't show up because Davey kept her awake all night 😑 The most annoying part of her exchange with Lorelai after she fucks up is that she doesn't even sincerely apologize. Instead of taking responsibility and owning up to her mistake, she makes excuses and treats Lorelai like she's crazy for being angry.

Best literary or pop culture references:
The conversation about Richard's new mustache kills me every time:

Stars Hollow weirdness:
The townies (sadly) aren't in this episode and there is no mention of shenanigans.

Janet: You drove your own boyfriend away, so you hate that anyone else has one.
Paris: Oh please.
Janet: Yeah, why don't you go sit all alone in your room so you can start getting used to how the rest of your life's gonna be.
Paris: I'm not alone.
Janet: Oh, really? Who do you have besides your poster of Noam Chomsky?

It's nice to see someone challenge Paris and leave her speechless for a change.

Books mentioned/books Rory is reading:
Rory reads a book at her food hall card swiping job, but I'm not sure what it is. At this point, I'm completely over her bullshit and take immense pleasure in her failures. Girlfriend needs to experience legitimate hardships so that she stops crying over minor setbacks.

Best song of the episode:
Nada. S4 is really light on music and it makes me sad. Let's get some XTC up in this bitch.

Thoughts:
This is the first episode of "GG" where Rory and Lorelai have zero interactions. They keep calling each other and leaving voicemails, but don't manage to ever connect. At the beginning, they both feel like they're crushing it; by the end, they're crying to dudes (Luke and Dean, natch) and dripping with self-doubt. If they weren't such hopeless, privileged narcissists, I might feel sorry for them.

Lorelai is stoked about the inn's progress and calls Rory to tell her about their new horses, Desdemona and Cletus. The phone rings and unexpectedly, it's someone who wants to make a reservation. Lorelai clumsily writes the details on a Big Red gum wrapper and gives a proud little smile that suggests. Her big dream is finally materializing! Even though she got pregnant at sixteen and didn't go to college, she's adulting at a high level. The haters can suck it.

One thing I don't understand is how this person (Mr. Turner) knew about the Dragonfly's opening. Lorelai and co. aren't the savviest business people, so I doubt they were smart enough to put together a preliminary marketing plan. Maybe they bought ad space in the Stars Hollow Gazette or got an early listing in the yellow pages? Maybe Mr. Turner is one of Miss Patty's (many) sexual conquests and heard about it from her? This question keeps me up at night.

Lorelai's confidence crumbles when Tom confronts her and Sookie over lack of payment. If they don't even have enough money to pay the contractor, I'm not sure why they're buying horses and fancy French sinks. Did Lorelai think that she could just charm Tom into forgetting they owe him massive amounts of money? He agrees to carry on for a while longer while she and Sookie scrap together some cash. Since Jackson and the elder Gilmores are out of the question, Luke becomes the most viable target. The thought of asking a friend for money makes my skin itch. Nothing is more horrifying and embarrassing to me, so I understand Lorelai's hesitancy.

Her situation gets even worse when Sookie misses the sink delivery appointment and Michel is too busy ogling Celine Dion to pinch-hit. Even though she's mid-shampoo and obviously not going to make it to the inn before the sink person leaves, Lorelai rushes out of the hair salon. After tearing Sookie a new one and receiving a weak ass apology in response, she heads to the diner and makes a dinner date with Luke. Since she can't depend on Sookie or Michel for dick, it's officially last resort time.

At lunch with Gran and Jason, Lorelai fields a bunch of questions about her financial investment in the Dragonfly. After a brief line of questioning, Gran somehow knows that she's broke as fuck:

"You are hemorrhaging money. I see it in your eyes. It must be costing a fortune to get a contractor to stick to a projected completion date. And you're not working now. Unless your partner is a Rockefeller, you are in serious financial trouble."

Gran blames Richard for Lorelai's purported failure and much to Emily's delight, he does not take this kindly. I'm firmly on team Richard and don't understand why Gran thinks it's his job to micromanage his adult offspring. After this lunch, Lorelai is feeling so shitty that she finds Luke (who is already all dressed up) and tells him she needs to reschedule their dinner. After a few weird exchanges, she ends up losing her shit on a park bench and murmuring "I don't know what to do" while Luke awkwardly pets her hair. She does tearily blurt out a request for $30k and Luke, flummoxed, stumbles over his words a bit before Lorelai says, "I don't want to talk about it now." Casual manipulation of Luke ... what else is new.

It's interesting that Lorelai doesn't spill her guts to Jason. They're definitely still fucking (we see them in bed together earlier) and he's at the uncomfortable lunch with Gran, but we don't see them interact after the uproar. This is one sign of many that Jason and his creepy facial hair are not long for this world.

Rory's plotline is far less compelling. Lorelai's money issues are idiotic and typical, but at least they're actual issues. Rory has taken one too many classes this semester and is struggling to keep up with her schoolwork. I'm not entirely sure how because she doesn't have any friends or participate in extracurricular activities (aside from the paper). She leaves Lorelai a voicemail on the way to her game theory professor's office. She's headed there under the guise of asking for clarification on a lecture when she really just wants to know what grade she got on a paper. Since she firmly expected an A, she's shocked to hear that she's received a D. Her professor accuses her of using material from another class to pad her paper and tells her that she should drop the class.

If it has zero impact on your graduation date and erases a shitty grade, drop the damn class! What is the big deal? But of course, Rory is a perfectionist and incapable of rational thought when it comes to academics. Coupled with Lane's impending Yale departure (the roommates have finally spoken) and lack of communication with her mom, this setback is enough to drive Rory back into Dean's idiotic embrace. How can an embrace be idiotic, you ask? Everything Dean does is idiotic ... how dare you question me.

The episode ends with more voicemails, now tinged with sadness instead of excitement. The girls are both "failing" and don't cope well without each other. Isn't extreme codependence heartwarming?