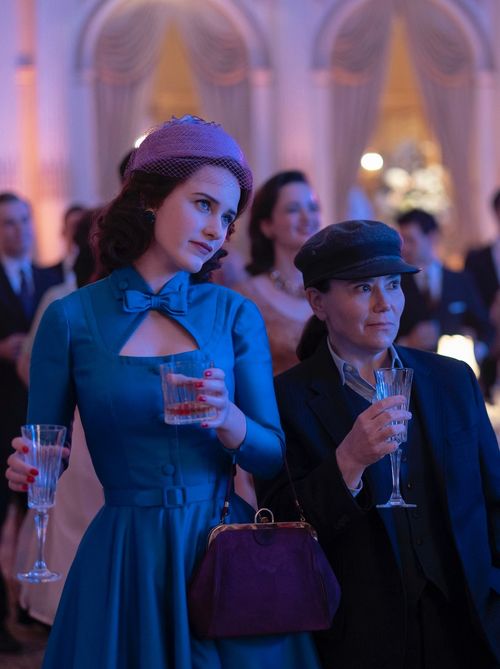 'The Marvelous Mrs. Maisel' Season 4, Episode 5: How to Chew Quietly and Influence People

In the first episode of the season, I worried about how the writers would handle Midge's Shy transgressions. Her "revenge" set at the Gaslight indicated a complete lack of remorse and self-awareness. As fun as it can be to watch a character who storms through life with tits up and middle fingers blazing, character growth is a requirement for sustained likability. Of course, it isn't always necessary for a protagonist to be likable, but I believe it is essential in the Palladino universe. If Midge's bad qualities outweigh her appeal, watching the show becomes a tireless chore instead of a delightful escape.

In a pleasant turn of events, "Chew Quietly" features an empathetic Midge who understands the gravity of her actions. When she first receives the invitation to Shy's wedding and marches into Susie's office, it's with a "fuck shit up" mentality. Not only is it weird to be invited after the unceremonious tarmac dismissal, but it's without Emily Post's customary forty-five days of notice (Emily Gilmore would shit herself). Midge's plan is to show up at the event sans RSVP with the goal of causing some general ruckus, whereas Susie sees a good opportunity to hobnob. Whether it's Jackie's untimely death or the new office, something has nudged Susie into business bitch mode, increasing her chances of eventually losing a Central Park penthouse to an ex by at least 30%.

Going into the wedding, Midge seems oblivious to the lack of control Shy has over his own life. It's like she thinks that he, a gay man, chose to marry a woman in a big, extravagant celebration of his own volition. Being fired from the tour made her question everything she thought she knew about him, forgetting that despite his star status, he's still a pawn used to make a bunch of white male executives an ass-load of money. Unless he wants the gravy train to stop chooching, Shy must adhere to the heterosexual lady's man image they've cultivated for him. It's like a far worse version of the "Sophie from Queens" bullshit. Showbiz, baby! Ain't it grand.

In the puerile, early moments of the wedding, Midge and Susie look for ways to run up Shy's tab in the spirit of revenge. Of all their shenanigans, the most unhinged is mixing top shelf gin and Scotch, garnishing with two cherries, and then, during Harry Belafonte's (Josh A. Dawson) song for Monica (Chinara Hill), topping it all off with a glass of champagne. Featuring Belafonte at the wedding is a fun nod to the S3 speculation that Baldwin's character is based on him.

When Midge sees Shy slip off to the bathroom in the middle of dinner, she follows suit. Her prior behavior at the wedding suggests she's gunning for a confrontation, but what transpires is a heartfelt apology. The bait-and-switch of this wedding sequence — and the season up to this point — is masterfully done and feels true to the S3 relationship between these characters. After being dismissed from the tour, Midge wasn't only suffering from a bruised ego, but the dissolution of a legitimate friendship that she now fears was entirely one-sided.

Aside from a request for forgiveness, her conversation with Shy contains all of the necessary elements for an effective apology. It's almost as if Midge has been attending secret therapy sessions between the S4 premiere and this episode. She understands that her Apollo set was a fucked up, ill-conceived disaster that temporarily benefited her but did irreparable damage to Shy. The old band has been replaced, Monica is now his permanent beard, and as Midge and Susie later learn, even Reggie is gone. Midge's Judy Garland jokes kickstarted a chain of restrictive commands from Shy's management that will surely diminish what little agency he has left.

When Midge declines Shy's drink invitation, it's both understandable and depressing. She feels like she's overstepped boundaries (which she has) and doesn't deserve his pity friendship. What she doesn't initially see is the loneliness and isolation he's incurred since their last interaction. In retrospect, it doesn't feel like pity at all, but a desire to be in the presence of someone, no matter how flawed, who actually sees him. After all, not even Reggie knows his real name. He probably hasn't been called Dwayne since the night on the boat in Miami when Midge put her B. Altman makeup skills to the test.

As Midge and Susie try to exit the wedding, two menacing-looking bodyguards direct them into a backroom where Shy's agency people are waiting. Along with confirming Reggie's exile and their new, restrictive path for Shy, the team starts offering Midge money in exchange for her silence regarding any sensitive information he may have divulged. Much to Susie's dismay, Midge turns down enough money to buy a "shiny, nazi Mercedes" on principle. She already promised Shy that she wouldn't say anything and has no intention of breaking her word. It's a nice sentiment, but I hope Midge realizes that her dry cleaning isn't going to pay for itself.

To make up for the $12k (~$115k 2022 equivalent) they rejected, Midge and Susie load up on Chanel No. 5 gift bags and hop in a taxi. Before it pulls away, Midge spots Shy mournfully smoking a solo cigarette at the side of the building. Her lingering gaze communicates not only deep regret, but concern that this person she once knew and loved might not be OK. In just one episode, the writers demonstrate significant character development for Midge. She is capable of admitting when she's wrong and realizing that other people have experiences she can't possibly understand.

Kate Fodor, a writer/producer who has been working on the show since the beginning, deserves props for crafting a satisfying resolution to the Midge/Shy storyline. It's explicit enough that there's no question about Midge's feelings, but contains plenty of quiet moments that give Brosnahan and McClain room to emote without the typical rapid-fire Palladino dialogue. I likewise appreciate the decision to leave Reggie out of the equation. Midge could have easily thrown him under the bus, explaining to Shy that Reggie advised her to center her set around him, but she doesn't do that. She takes ownership for the entire situation, which I don't think the Midge of S1-3 would have ever done.

My only big criticism of the bathroom scene is that Shy should have gotten more dialogue. Midge is our protagonist and "Maisel" is always going to be centered from her perspective, but I wanted Shy to have a chance to tell her how she made him feel. S3 benefited tremendously from the introduction of Black (and queer) characters, but it becomes tiring to experience everything through Midge's lens, especially as she charms her way to forgiveness. The show gives plenty of Midge-less scenes to characters like Susie, Rose, Abe, and even fucking Joel. Why couldn't we get a scene with just Shy that shows the ramifications of Midge's actions? I'm happy to see her finally admit fault and while I think the apology works well in the context of the episode, I do fear that it lets Midge off the hook a little too easily.

Similar to Midge, Susie exhibits (professional) growth in "Chew Quietly." She suffers through countless awkward secretary interviews before hiring a woman (Alfie Fuller) who has the gumption to stick around the office seven hours past her original appointment. (Don't ever do this in real life, though. Fuck an employer who doesn't respect your time.) Impressed, perhaps by her "natural flair for meticulous organization," Susie offers her the job without even knowing her name.

Bogged down by Sophie's harassment and sad admissions of dog food consumption, Susie throws her a bone and finagles her an interview on the Gordon Ford show. Susie is a grouchy bitch who generally hates people, but I admire the way she handles the conversation with the booker, Mike Carr (Jason Ralph, AKA Jake Devereux on "Younger"). She knows when to cut Sophie off, fluff her up, and put a new spin on an old story that no one else wants. This is some Harry Drake, make-or-break a career, shit. Like everything she does, it's a gamble, but if it works out well, she'll quickly build a big name for herself.

Miraculously, it goes better than she could have anticipated. Sophie kills on Gordon Ford, eliciting squeals of delight from Abe and Rose, who are watching from the Upper West Side. She's vulnerable and funny with a healthy dose of self-deprecation that would have been rare to see from a female celebrity in 1960. Gordon is so charmed that he even bumps his next guest to talk with her for an additional segment. If Sophie manages to launch a comeback from this interview, I have to imagine that Susie's services will be in high demand.

Speaking of the elder Weissmans, they seem to have recovered from the weird, filler Asher drama of the previous episode. Things are initially tense, but then Abe decides to reconcile with Rose once he realizes that sleeping on the couch is a no-no because "It wears out the cushions faster than just everyday sitting." This is a line ripped straight from my own dad's playbook.

Rose's previous matches must have been a success, because she's been summoned by Solomon Melamid (Scott Cohen!!), a wealthy Scarsdale businessman with two unmarried daughters in their thirties. I initially thought that Rose was going to have an affair plot with Solomon because of the intense sexual chemistry, but it doesn't seem to be headed in that direction. Instead, Solomon's "decency, dignity and discretion" speech scares the shit out of Rose, who starts snooping around Midge's room as soon as she gets back to the apartment. This job is a huge step up for her and she's worried that her problem child is going to wreck her reputation.

After finding her Wolford matchbooks and box of press clipping (but no Tootsie Rolls), Rose shows up at the club, utterly scandalized by the bubble bath dance. The confrontation she and Midge have back at the apartment perfectly showcases the "like mother, like daughter" nature of entitlement. Rose can't see the hypocrisy behind invalidating Miriam's work/passion while demanding respect for own newfound career.

Rose: Miriam, my job is very important to me. I could be on the verge of something very big here.
Midge: Me, too.

I'm loath to discuss Joel and Mei because their relationship isn't developed enough for me to give a shit, but I suppose it's necessary. Their big drama revolves around a dinner with Moishe and Shirley. Mei is sick of being inundated with calls and visits from prospective romantic partners for Joel, so she finally agrees to meet the parents. She even buys a yarmulke and learns some Yiddish from a Jewish woman in her pathology lab. But then, when faced with actually meeting the Maisels, she bails. Instead of taking the opportunity to explain to his parents that he's dating a Chinese woman, he lies and says her name is Rachel, which Shirley immediately notes is a "nice Jewish name." This isn't going to end well for anyone and I am not here for it.

Mei doesn't want to deal with over-involved parents and a son who can't stand up to them and I don't fucking blame! Get out, Mei. Get out now. Don't fall prey to the Lane Kim trap. 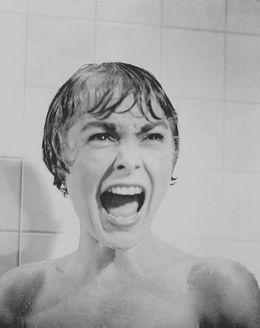 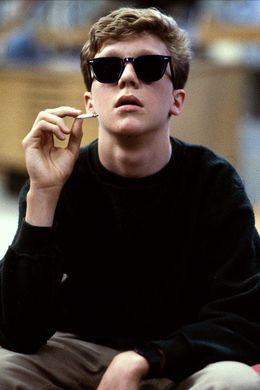