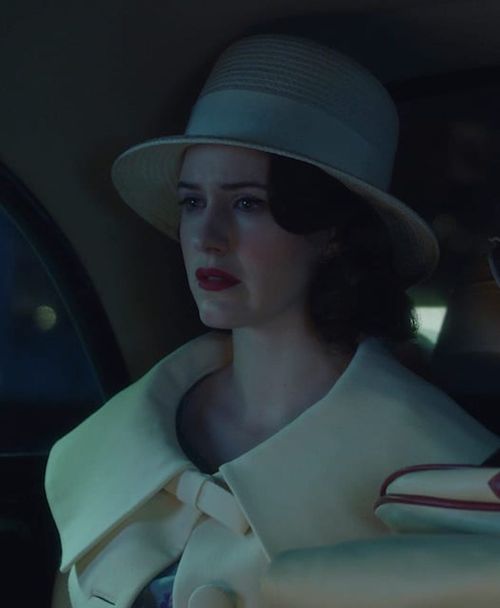 Let's get one thing out of the way: of course Midge Maisel is an asshole. All of Amy Sherman Palladino's female leads are assholes. Lorelai Gilmore? Asshole. Sarah Tomkins? Asshole. Michelle Simms? Probably the most redeemable character of the lot, but still an asshole. ASP isn't interested in serving up likable, unproblematic characters who go through life without making colossal mistakes that hurt other people. And as you know if you've read any of my "Gilmore Girls" recaps, I am (mostly) here for it. I draw the line when the asshole characters are lauded as do no wrong darlings within the world of the show, calling into question whether or not ASP actually recognizes their faults. As for how the show treats Midge blatantly outing a closeted gay character, well ... the jury is still out.

In the S3 finale of "The Marvelous Mrs. Maisel," Midge (Rachel Brosnahan) makes a shitty string of mistakes in her opening set for Shy Baldwin (Leroy McClain) at the Apollo Theater. When Reggie (Sterling K. Brown), pinch-hitting for MIA Susie (Alex Borstein), advises a nervous Midge to win over the audience by telling stories about Shy, she leans hard into his foppish characteristics, quipping about his harem of subservient men and closet large enough to warrant a doorbell. Even in 1960, Midge's Judy Garland reference would not have flown under the radar in a hip crowd. If I'm being generous, Midge maybe didn't understand what she was doing at the time but frankly, she deserved to get fired on the airport tarmac with two taxis and twenty-five suitcases idiotically waiting in the wings.

If "Maisel" were made by someone other than ASP, this setback might have led to Midge pulling her head out of her own ass and thinking about how her actions have negatively impacted Shy. Instead, she doubles down on her entitlement and embraces the "once again a man has stepped in and fսckеd up my life" narrative. You know, the one where she takes zero accountability for her actions and pushes the blame onto someone else.

In the opening scene of "Rumble on the Wonder Wheel," Midge is performing a set at the Gaslight about her desire to enact revenge against Shy for the unceremonious ousting.  The audience already knows about it because there was a newspaper story, full of inaccuracies, detailing how she was abandoned at Penn Station (pre-Madison Garden, so it wasn't yet a shit hole) clutching a single suitcase. Midge tells the audience, "Please. I haven't traveled with one suitcase since my first day of kindergarten." As she begins talking about the night she was dropped from the tour, there is a flashback to Susie and Midge, sitting in the backseat of a cab, on the verge of a nervous breakdown.

Midge alternates between silence and morose laughter while Susie tries to figure out what the fuck to do. When Midge throws her hat out the cab window, Susie asks, "Miriam, do we need a pill?" Where's Paris Geller and her grab bag of drugs when you need her? As Midge's manic anger intensifies, she starts taking off the rest of her clothes and tossing them out of the moving cab. The scene culminates with a bodysuit-clad Midge grabbing a large tree branch and smacking the hood of the cab before getting into a slap fight with Susie. It's all wonderfully unhinged and a great way to visualize Midge's inner turmoil. Had we gotten to see Luke Danes beat up Nicole's lover's car, I imagine it would have looked something like this (sans nakedness).

When she and Susie actually discuss the set, Midge keeps coming back to the fact that the audience loved it. Susie contends that had she been there, Midge would have used different material and probably bombed, but that they would still be on tour. This moment is significant because it shows how Midge values laughter and adoration over the feelings of other people. She refuses to understand that labelling something as a joke doesn't give her carte blanche to say whatever the fuck she wants at the expense of other people. Maybe she'll come around as the season progresses but for now, she's firmly ensconced in the victim mentality.

As the rage subsides, Midge and Susie realize that they can't go back to their respective apartments reeking of failure, so they head to the Gaslight. Susie has apparently spent many nights sleeping in the front room with the sticky floors, because there are a lot of spots that she associates with nightmares. After drinking a bottle of random floor booze, Susie contends with her sleep demons while Midge, who somehow found energy to put curlers in her hair, lies awake.

The next morning, Midge dons Susie's leather jacket and newsboy cap as she runs out to Washington Square Park for a paper. Flipping through the pages, she learns that Shy has replaced her with another comedian named Jack Ballard. In a frenzied panic, she rushes back to the Gaslight to inform Susie that the writer L. Roy Dunham (who I assume will be played by Milo Ventimiglia) is now on her shit list.

At this point, several loose threads from S3 come back into play. Before the disastrous show at the Apollo, Midge makes a deal with Moishe (Kevin Pollak) to buy back the apartment that she once shared with Joel (Michael Zegen). Once Moishe realizes that she's been fired, she'll have to go through the rigamarole of convincing him yet again that she's good for the money. Thankfully, Midge has a little nest egg saved from the first half of the tour, which she entrusted Susie to keep for her so that she wouldn't blow it all on dumb shit, only ... Susie herself has blown it on dumb shit (gambling). She missed Midge's problematic show at the Apollo to burn down her dead mother's house with Tess in hopes of collecting insurance money to pay back Midge. These bitches are mess upon mess.

After delaying Midge's money request with some weak sauce excuses Susie telephones Tess (Emily Bergl) to arrange the insurance check retrieval. When they show up at the office, they're escorted to a creepy room with no handle on the door and basically accused of arson. After begging Tess to mitigate the insurance guy's suspicions by sleeping with him, Susie leaves the office sans money. Susie needs to get her shit together because I am not prepared to watch her become a character from a Safdie brothers movie.

In a desperate attempt to avoid a major falling out with Midge, Susie turns to Joel. After her gambling loss in S3, she stopped by the Button Club and made him promise to help her manage Midge's money. She was supposed to transfer all of it over to him, presumably after paying herself back with subsequent tour checks. When she visits him this time, she tries to gaslight him into believing that she had given him Midge's money and that she now needs it back. When Susie realizes that Joel isn't going to indulge her nonsense, she leaves.

While Susie scrounges around for money, Midge contemplates breaking the tour news to her family. When she calls the Maisel household from the Gaslight, Shirley (Caroline Aaron) answers the phone and informs her that everyone is busy celebrating Ethan's birthday. It's not actually Ethan's birthday, but it turns out that all of the adults had conflicts on the real date, so they decided to reschedule it. I see nothing wrong with this, which is probably why I should never become a parent. Shirley made him three cakes and they're taking him to Coney Island to ride the Wonder Wheel! Who gives a fuck if the kid never knows his real astrological sign because his parents can no longer remember his actual date of birth?

During this call, Midge keeps up the charade that she's currently in Prague with Shy and just checking in to say hello. Later that day, she shows up at Coney Island and has it out with the entire family on the Wonder Wheel. With everyone in different cars, the Maisels and the Weissmans shout back and forth to each other with reckless abandon, surely driving many other passengers to the brink of insanity. Joel is pissed that he wasn't consulted before the apartment purchase, Moishe fears he's been swindled, Abe (Tony Shalhoub) is in disbelief that he and Rose (Marin Hinkle) were set up via matchmaker, and Shirley really wants to know if everyone's funnel cake is delicious. Had I not been under the influence of copious amounts of marijuana, I might have found this band of articulate lunatics annoying.

With her failure out in the open, Midge begins to rethink her approach to comedy. Over corned beef sandwiches at the Stage Deli (after being heckled by two other comedians who think she's a whore), a new game plan comes to fruition. Midge is convinced that her best shows are the ones where she riffs and says whatever the fuck she wants. She's done censoring herself for opening acts and ready to become a headliner. I'm tempted to dismiss her as a narcissist who refuses to live in reality, but I think that a certain level of self-aggrandizing delusion is necessary for anyone who wants to break into show business. People who want to accomplish big things need big dick energy. If Midge thinks she can change the comedy business, a bullish attitude is necessary.

The final scene of the show takes us back to Midge's Gaslight set from the beginning. Amidst a legitimately funny joke about anti-Semitic Nazis, she starts talking about a voice's power to change the way people think and act. It initially feels like a rah rah girl power moment on the heels of the previous "let's change the business" diner scene, but if we assume it's a continuation of her Shy Baldwin revenge speech, it takes on a different tone. She says,

So, the lesson she learned when she was fired from her job for outing her boss was that her voice is powerful? I guess this is Midge's cancel culture moment. Instead of writing a lame ass apology on the 1960s equivalent of the notes app, Midge is taking the Woody Allen approach: deny that what you did was wrong, skew the narrative to suit your needs, and refuse to back down at all costs. Cool, cool, cool.

The other big developments in this episode revolve around Joel. After he learns that Midge borrowed from his dad to pay for the apartment, he invites Susie back to the club and offers to loan her the money. He'll write a check for Susie and then Susie will use that money to write her own check for Midge. Everyone gets what they want until Midge eventually finds out about this arrangement and is equally pissed at both Susie and Joel. One condition of this loan is that Susie must divulge all of the details about what happened with the money to Joel, so maybe he'll get a hold on the situation and everything will magically resolve with minimal conflict.

I don't have much to say about Joel's "English to Chinese dictionary from the 1800s" other than yikes! I'm glad Mei (Stephanie Hsu) called him out on wasting everyone's time with that bullshit. The big news is that Joel's landlords — who may or may not be Mei's parents — are concerned about the club's success. They wanted a front for their illegal basement casino, but nothing that would draw too much attention. Mei was supposed to make sure that Joel failed (e.g. the Chinese jukebox), but ensures him that she's on his side. If this show pulls a Lane Kim and fucks Mei over after Midge and Joel inevitably get back together, I'm going to scream.

'The Marvelous Mrs. Maisel' Season 4, Episode 5: How to Chew Quietly and Influence People 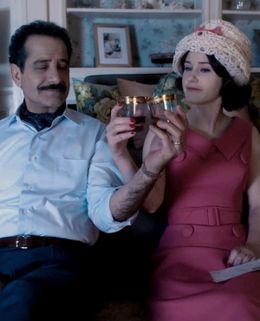