Directing and writing credits:
"Girls in Bikinis, Boys Doin' the Twist" is directed by Jamie Babbit, written by Amy Sherman-Palladino. I desperately want Babbit to direct another feature film. I revisit "But I'm a Cheerleader" (1999) once every few years and surprisingly, it holds up! Recently, she directed the pilot for Tracy Oliver's adaptation of "The First Wives Club," streaming on BET+ this fall. Here are her previous "GG" episodes:

"The Road Trip to Harvard" - "Rory, stop it! We are not gonna have this fight in a flowery bedroom with dentists singing "Gypsies, Tramps and Thieves" in the background. It's too David Lynch!"
"Dead Uncles and Vegetables" - Lorelai embraces old school diner talk and annoys everyone by saying shit like, "Adam and Eve on a raft and wreck 'em!"
"Lorelai's Graduation Day" - Rory and Jess browse records in what I assume is the Village while The Pixies' "Monkey Gone to Heaven" plays.
"Take the Deviled Eggs..." - Luke accuses Jess of being a gigolo.
"That'll Do, Pig" - Richard receives Chuck Berry on vinyl, the "Complete History of the Peloponnesian War," a bow tie, and a cigar humidor for his 60th birthday.
"Lorelai Out of Water" -We sadly learn that Hug-A-World is infested with bugs.
"The Big One" - Paris flexes her musical theater knowledge before an unfortunate public meltdown.
"Say Goodnight, Gracie" - Dave reads the entire Bible cover-to-cover in one night; Mrs. Kim is marginally impressed.
"Those Are Strings, Pinocchio" - Rory gives a self-indulgent valedictorian speech and everyone, including Luke, cries.
"Ted Koppel's Big Night Out" - It takes a Limp Bizkit rendition of "Nookie" for Luke to realize that he needs to fire Brennon, his new waiter.

Sherman-Palladino was recently on an episode of "Bullseye with Jesse Thorn," which is all the news I have for you on that front.

Most batshit crazy outfit:
For once, I'm kind of onboard with the wardrobe choices. I like Rory's ultra conservative bathing suit and her weird, norm-core dad clothes. Lorelai wears a shirt with a ribbon that isn't great, but it's small potatoes compared to some of her wilder garb. If anything, I'm not a fan of Louise's Britney Spears circa 2000 beach look. She wears a weird outfit at the club, too ... hooker heels, cargo capri pants, and a puka shell necklace. I probably would have thought this was cool in 2003.

Side note: am I the only one who continuously mixes up Madeline and Louise?

Most irritating Rory or Lorelai moment:
I hate when Lorelai acts like she has no idea what's going on when Jason gives her a key to his apartment. I'm immediately reminded why their relationship works because he's just as obnoxious. Instead of immediately clarifying and just saying something like, "Our relationship is going well and I'd like you to have a key to my place," he fumbles around like a clueless little boy who has never expressed vulnerability before.

Jason: Yeah, it's a key to the apartment.
Lorelai: Oh ... good. Do you want me to let someone in?
Jason: No, it's just an extra key. I thought, you know, if you were coming over and I was running late this way you didn't have to wait in the hallway.
Lorelai: Okay.
Jason: Or if you were carrying something, and you couldn't wait for me to get to the door ... this way, you're all set.
Lorelai: Okay ... good. Makes sense.
Jason: Yeah, it's just a practical thing. It's not a big deal.

These two have the cumulative emotional maturity of a single 14-year-old.

Number of times Rory or Lorelai treat their bff like shit:
Lane isn't in this episode (neither is Sookie), but I hope we can all agree that Paris is obviously becoming Rory's bff. Kiss aside, those two have great friend chemistry and balance each other out nicely.

Best literary or pop culture references:
After hearing about Paris' relationship with Asher Fleming, Louise laughs and says, "Well, Anna Nicole, look at you." I just listened to the episode of "You're Wrong About ..." on Anna Nicole Smith and now I'm obsessed with her. This podcast is my favorite new discovery and if you don't already listen to it, wtf are you waiting for? Mike and Sarah deserve medals (or, you know ... money) for their service.

Stars Hollow weirdness:
Kirk starts a one-man pedicab business that he is not cardiovascularly prepared to handle. The opening scene shows him pedaling at snail speed while Rory and Lorelai sit in the back, worried about Luke running out of doughnuts before they can get to the diner. After the girls hop out, Kirk takes off, blames them for slowing him down, and screams "freshman 15" to Rory. This is gross behavior, but I love it when Kirk is a bitch.

Sharpest insult or one-liner:
If I ever stop laughing at this exchange, it's because I'm dead.

I haven't read either of them, so I won't pretend to have any opinion. We also catch a glimpse of some titles on her shelf as she's packing in her childhood bedroom:

Rory is shockingly tolerable, maybe even likable, in this episode. Why couldn't she have stayed a bookish nerd in a one-piece bathing suit forever?

Best song of the episode:
I obviously have to go with "So Says I" by The Shins. Rory and Paris see them play live at a "hot club" during spring break in Florida. I'm a little flummoxed that neither of them is like, "Holy shit, it's The Shins!" Rory should have at least said something like, "Lane is going to be so jealous."

Thoughts:
This episode provides a much-needed break from the Warner Bros. studio and takes us to the Sea Sprite Motel for spring break. There are small, inconsequential B stories with Luke (he vandalizes a car) and Jason (he awkwardly gives Lorelai a key to his apartment), but most of the focus is on Rory and Paris' blossoming friendship. I love these two as friends! They share the same level of bookish, judgmental grouchiness, but Paris is more of a freewheeling acid bomb in every social situation. Her hijinks often force Rory to adapt and go with the flow. High school Paris was incredibly uptight; college Paris has mellowed enough that she would probably even try weed if someone offered it to her.

At Yale, Paris and Rory eat breakfast (All-Bran and Froot Loops, respectively) and discuss their plans for the lamest political protest of all time. These two dingbats think they're going to help release Burmese political prisoners by sitting outside at a lame card table with a half-assed sign and tiny bowl of rice. Of course, no one wants to stop and talk to them and when it starts to rain, they run inside, soaked and grouchy. For some reason, they decide to get into bed without first drying off and removing their soaking wet clothes. Are we sure they go to Yale? As they shiver, miserable about the cold New England spring, they remember Janet's invite to come to spring break in Florida.

I hated my freshman year roommate and never once invited her to dinner, let alone on a vacation in another state. I guess the rationale is that Janet doesn't want to be alone with Glen, "a guy who's bummed that he got turned down by that German cannibal." Armin Meiwes, a man who killed and ate a voluntary victim that he found via the Internet, is the cannibal in question. At one point, Meiwes severed the victim's penis and then they both tried to eat it. If that's how Glen rolls, whatever ... at least he's not a rapist.

Back in Rory's weird childhood bedroom (so many mouse figurines), she packs for spring break while Lorelai makes fun of her swimsuit and pretends to be a concerned parent for 10 seconds. Glen's van arrives and surprisingly, Paris is the one behind the wheel. She says, "I can't be in a car if anybody else is driving, okay? If I die in a car crash, it's going to be at my own hand." Respect.

Once they arrive at the Sea Sprite, Paris makes sure everyone knows that she tips well. Here's my list of everything that earned (at least) a Paris Geller sawbuck:

When she and Rory decide to head home early at the end of the episode, Paris uses frequent flyer miles to book them flights. Can I be friends with Paris? Gf is not afraid to flex her wealth and allow those around her to reap the benefits.

After the perfect introverted night in with pizza and "The Power of Myth," Paris and Rory start worrying that they're not doing spring break right. Madeline and Louise are staying out all night, hitting up the hot clubs, and making out with each other. After a day at the pool, watching people fight each other with "giant Q-Tips," Paris and Rory decide to accompany Madeline and Louise to one of those aforementioned hot clubs. The Shins play, which they are weirdly not excited about, while everyone dances awkwardly. Paris, forever the most competitive person in the room, decides that they're not having enough fun and need to kick it up a notch.

After the world's lamest kiss, boozy punch, drunk dialing Dean, and vomiting (which we unfortunately don't get to see), they decide to head home. Paris and Rory tried acting like normal people and doing "cool" activities, but ultimately realized that they'll always be the nerds who want to stay home, eat junk food, and watch old movies 1,083,308 times. This realization warms my very cold heart. 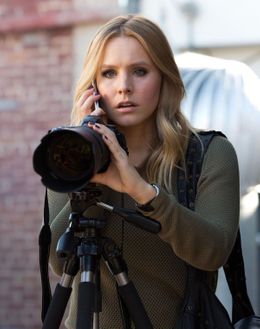