"The Road Trip to Harvard" - Lorelai and Rory spend approximately $500 at the Harvard bookstore on questionable shit like branded bucket hats.
"Dead Uncles and Vegetables" - Luke proves he's a better person than me by arranging his awful uncle's funeral.
"Lorelai's Graduation Day" - Seth MacFarlane makes a random appearance and Rory visits Jess in the fakest NYC I've ever seen.

Babbit has directed a bunch of episodes of "Silicon Valley," a show I watch mainly for Jared, and has a movie ("The Stand-In") in pre-production.

I have nothing new to say about Palladino, but I did this find this photo of him and Alexis Bledel where her facial expression says it all. 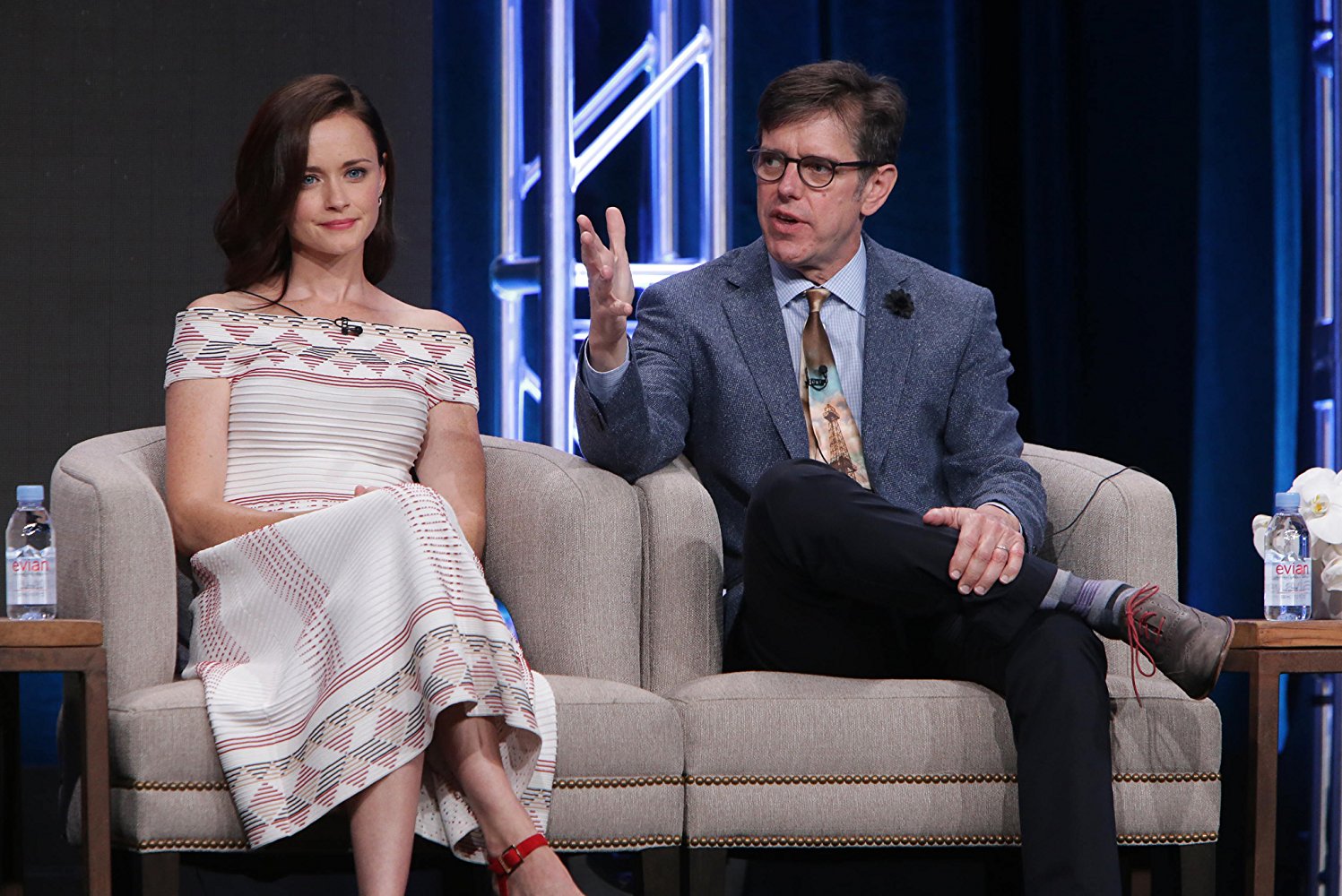 I guess I should also mention that he's credited as the town loner in this episode.

Most batshit crazy outfit:
Lorelai decides to try her hand at layering and fails miserably. The first outfit she wears is the most egregious. It consists of an embroidered floral camisole underneath a half-zipped navy hoodie with a gross leather blazer (it has buttons!) to top off the look. To make matters worse, her lightwash flared jeans have whiskering all over the thighs. The whole ensemble is ugly, boring, and doesn't even look comfortable. Next time, she should just completely give up and wear her Juicy Couture sweatpants. 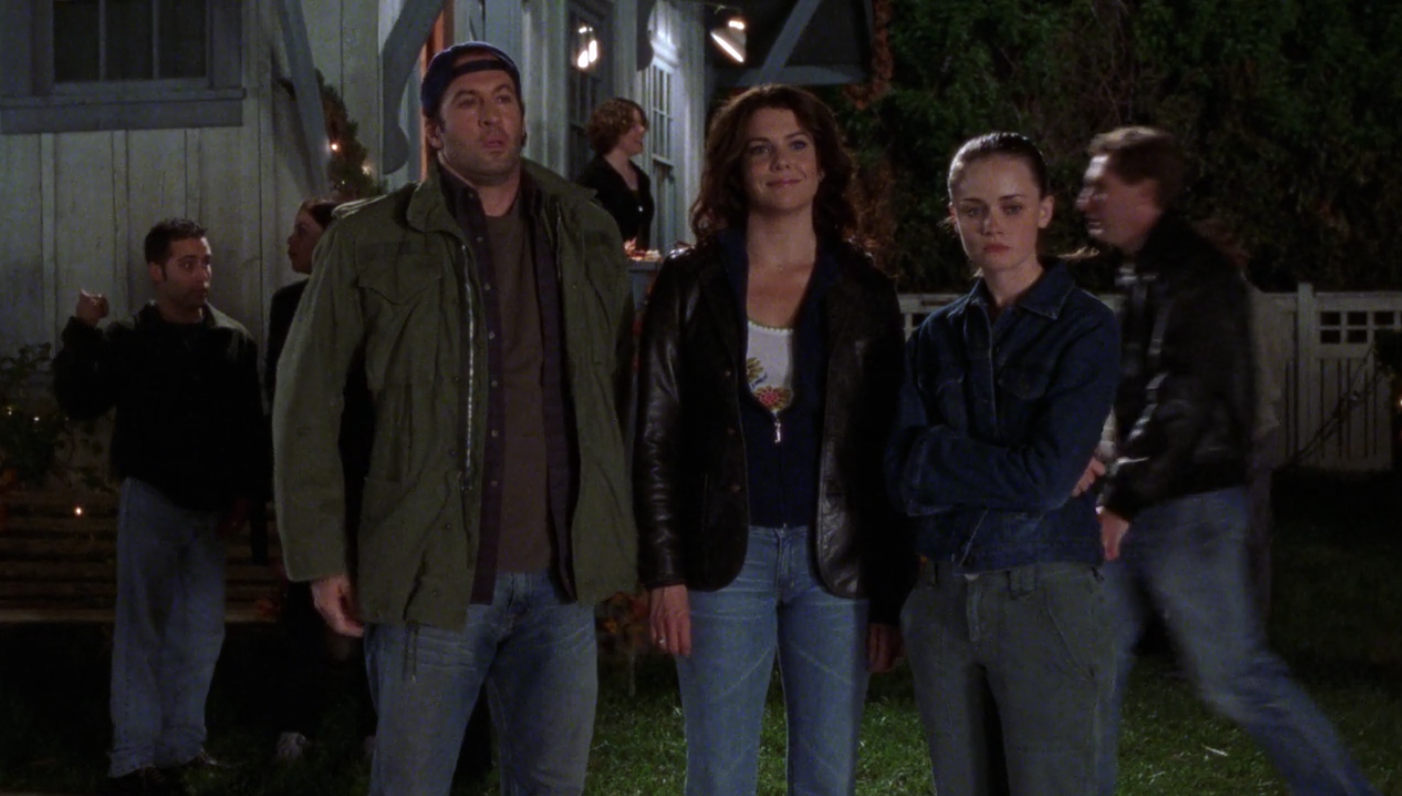 Luke is somehow the most fashionable one in the bunch.

Lorelai: This must be the place.
Rory: I think the balloons confirm it.
Lorelai: No pink, no blue.
Rory: All green.
Lorelai: Aren’t baby shower balloons supposed to reflect the sex of the baby? Blue for boys, pink for girls.
Rory: You would think.
Lorelai: What’s green for, aliens?
Rory: I’ll ask when I go in.

Maybe Sherry just doesn't subscribe to gender normative behavior. Did you ever think of that, Lorelai? Sorry to shatter your world here, but boys and girls can wear any colors they want, not just the ones that antiquated parts of society deem appropriate. For someone who loves being unique, you would think that Lorelai would be more open to opinions and philosophies that are different than her own.

Number of times Rory or Lorelai treat their bff like shit:
None. Lane tries to be a good friend to Rory by flipping out over Jess's car but I really don't understand it. As Rory stubbornly reminded us during the end of Season 2, the car wreck was an accident and just as much her fault as Jess's. Should he have purchased that shitty car for Rory instead of himself in order to make amends? The people of Stars Hollow really need to get off Jess's jock.

Best literary or pop culture references:
While discovering the town loner's protest request, Taylor and Babette have this exchange:

Babette: Yeah, Taylor, this protest is gonna be very mellow, very peaceful.
Taylor: Well, you can hang out in Haight-Ashbury and drink as much electric Kool-Aid as you want, Babette, but I’m preparing for the worst.

Taylor, like any old school conversative, is worried about civil disobedience and its ability to shatter his false sense of security. The mention of electric Kool-Aid is a nice reminder of "Lorelai's Graduation Day" when Jess was reading "The Electric Kool-Aid Acid Test" in the WB lot, aka Washington Square Park.

Jess: Someone devil-egged my car?
Luke: Well, that is paprika.

Also, speaking of deviled eggs ... I like how Rory and Lorelai throw approximately 10 eggs at his car, but it's totally covered the next day. There's no way one tupperware full did that kind of damage. 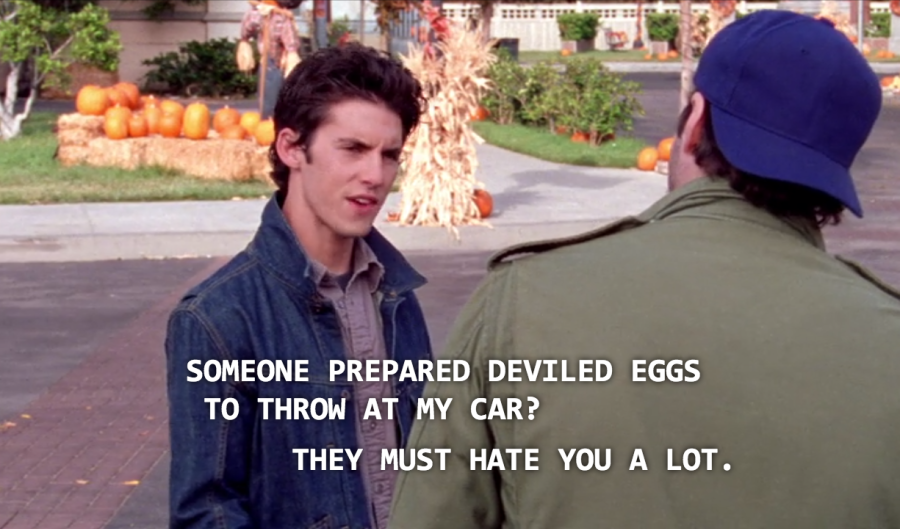 Books mentioned/books Rory is reading:
Rory isn't reading anything, but Lorelai references Boo Radley ("To Kill a Mockingbird") and "Deenie" (which also gets a shout-out in Season 6).

Best song of the episode:
I guess I have to go with "Everybody Have Fun Tonight" by Wang Chung. Sherry's baby shower music is like nails on a chalkboard. I'm with Lorelai completely when she says,

"I mean, they’ve been playing the same nondescript, soft, generic jazz for two straight hours. And who is that playing that stupid saxophone like that?"

Thoughts:
At the beginning of the episode, Lorelai is on a mission to cut down on her unnecessary catalog mailings. Apparently, she's subscribed to identical catalogs under the following names:

This is one of those times when Lorelai is totally extra, but doesn't annoy me. Tookie Clothespin is the type of stupid funny that I can get behind.

At the town meeting, the dude from Borat (Ken Davitian) shows up to take Miss Patty out on a date. The whole scene is weird and after it ended, my husband turned to me and asked, "Who wrote that shit?" Daniel Palladino, of course. There's a bunch of back-and-forth about pooping birds that Taylor wants to murder and the town loner's prospective protest. It's boring and I don't care about any of it. Palladino is so hit-or-miss with his townie scenes.

As everyone gathers outside post-town meeting, Jess drives past in a new (to him, not the world) car. For some reason, this is a huge Stars Hollow news item and Luke is baffled over how he managed to purchase it. This car is a beater and probably cost no more than $500. Jess works at the diner and has zero expenses aside from cigarettes and pocket-sized paperback books. It seems reasonable to me that he saved up his money and purchased it from Gypsy's without a problem, but I guess I'm wrong.

There are many character inconsistencies in the "GG" universe, but this one bothers me the most:

This doesn't exactly jive with the Luke who casually offered to loan Lorelai $15k to fix her house. Is Luke a wealthy hermit or not? Inquiring minds want to know.

After they get home, Rory opens her mail and finds an invite to Sherry's baby shower for THAT SUNDAY. Town hall meetings are on Thursday evenings, so Rory has approximately two days of notice before the party. For someone who is supposedly so organized, Sherry really waited until the last fucking minute to mail her invitations.

The only notable thing that happens before the baby shower is that Luke goes to Gypsy's to inquire about Jess's car purchase. Gypsy is annoyed with him and doesn't bother hiding it:

Gypsy: Guys are stupid.
Luke: What?
Gypsy: You strip your gears, you ride your breaks, and if we don’t laugh after we make a joke, you think we’re serious.

When Luke gets home, he rifles through Jess's things, in search of information about the car. This is the first, but not the last time that Luke tremendously disappoints me this episode. Jess might be an angry little shithead, but he deserves privacy as much as the next person.

Lorelai drives Rory to Sherry's baby shower with a plan to go shopping in Boston until it ends. Unfortunately for Lorelai, Sherry pops up and insists that both Gilmores attend. I know people like Sherry and I hate them all because their happiness is exhausting and they don't understand social cues. Unlike Lorelai, I avoid them like the plague. If I were in this situation, I would fake a heart attack before stepping foot in that apartment. 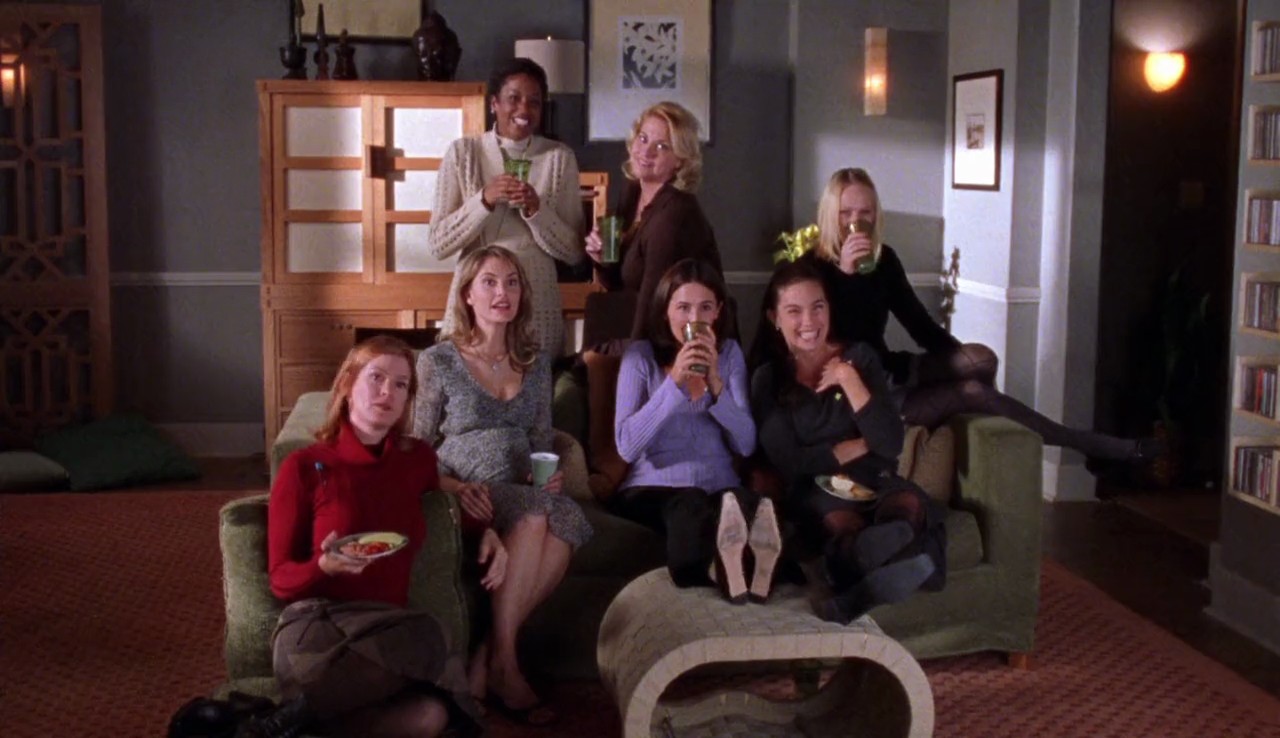 There is no way Sherry has a black friend. I call shenanigans.

The baby shower is filled with women I would never interact with under any circumstances. I know they're terrible because they all appear to be having fun while playing lame ass shower games. Even ten mojitos wouldn't make "guess what this is by smelling it" a rollicking good time. They should stone Maureen, "the instigator of this little soirée," to death.

Later, after Sherry talks kindly about Christopher and thanks her for whatever she said to him at Sookie's wedding, Lorelai has a complete meltdown in the bahtroom. Yes, Sherry is frustrating and her party is awful, but that doesn't make it okay for Lorelai to blame her for wrecking things with Christopher. I don't get that sense that Sherry is being manipulative; she just seems a little clueless about everything.

As far as we know, Christopher never told Sherry about sleeping with Lorelai the night before Sookie's wedding. I also doubt that Sherry realizes how absent Christopher was during Lorelai's pregnancy and how upset it makes her to see him taking a different, responsible approach with another woman. Sherry has met Lorelai a handful of times (maybe even just once?), so it's not like she's had ample opportunity to pscyoanalyze her.

Here is the most annoying part of Lorelai's rant:

Lorelai: Well, you’re spending all your weekends with me. That’s a given. And she ... she had to have a girl. That kills me!
Rory: That her baby’s a girl?
Lorelai: Yes, because I have a girl. She’s just a copycat.
Rory: She can’t control the sex of her baby.
Lorelai: Oh, really? Little Miss 'Mani-pedi-I’ll-give-birth-before-five-o’clock?' Uh, I think she can.
Rory: Mom ...
Lorelai: "All I want’s a ballerina." Poor thing’s gonna pop out of her womb and land in a tutu.
Rory: Boy, I hope not.
Lorelai: And what is with that name – G.G.?
Rory: It’s a cute name.
Lorelai: It is, ‘cause she’s copying me there, too. Rory, G.G., Rory, G.G. They’re identical.
Rory: They are not identical.
Lorelai: Two syllables, repeating consonants. Rory ... G.G.
Rory: Oprah, Uma.
Lorelai: Don’t mock.
Rory: I’m just trying to joke you down off that ledge.

So what if Sherry wants to schedule her c-section and dream about having a little ballerina? Mind your own fucking business, Lorelai. Judge her for being a dumb bitch with horrible taste in music but maybe give her a break when it comes to decisions about how she wants to birth her child.

After the baby shower, Rory and Lorelai throw deviled eggs at Jess's car and I don't approve of their antics. Jess deserves all the scorn in the world, but he slaved away at Wal*Mart in order to afford that car and they're jerks for defacing it.

And while we're at it, Luke is a jerk for trying to make Jess feel bad about working at Wal*Mart. Give the kid a break. He wanted something, so he went out and got a part-time job in order to afford it. Has Rory, the town's golden child, ever worked a day in her life for anything she owns? Fuck no. I hate to defend Jess, but he's really not as bad as everyone in Stars Hollow thinks he is. 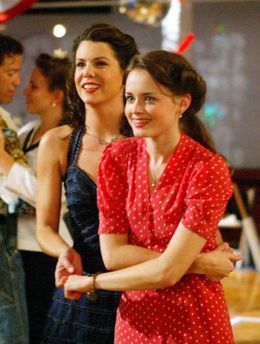 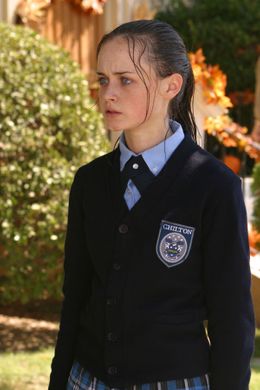