Directing and writing credits:
Directed by Lesli Linka Glatter, written by Daniel Palladino. Linka Glatter is great and has directed many awesome shows and movies, including these previous "Gilmore Girls" episodes:

Linka Glatter also directed four episodes of "Twin Peaks," so I think it's cool to see her reunited with Madchen Amick, aka Shelly Johnson, aka Sherry Tinsdale. 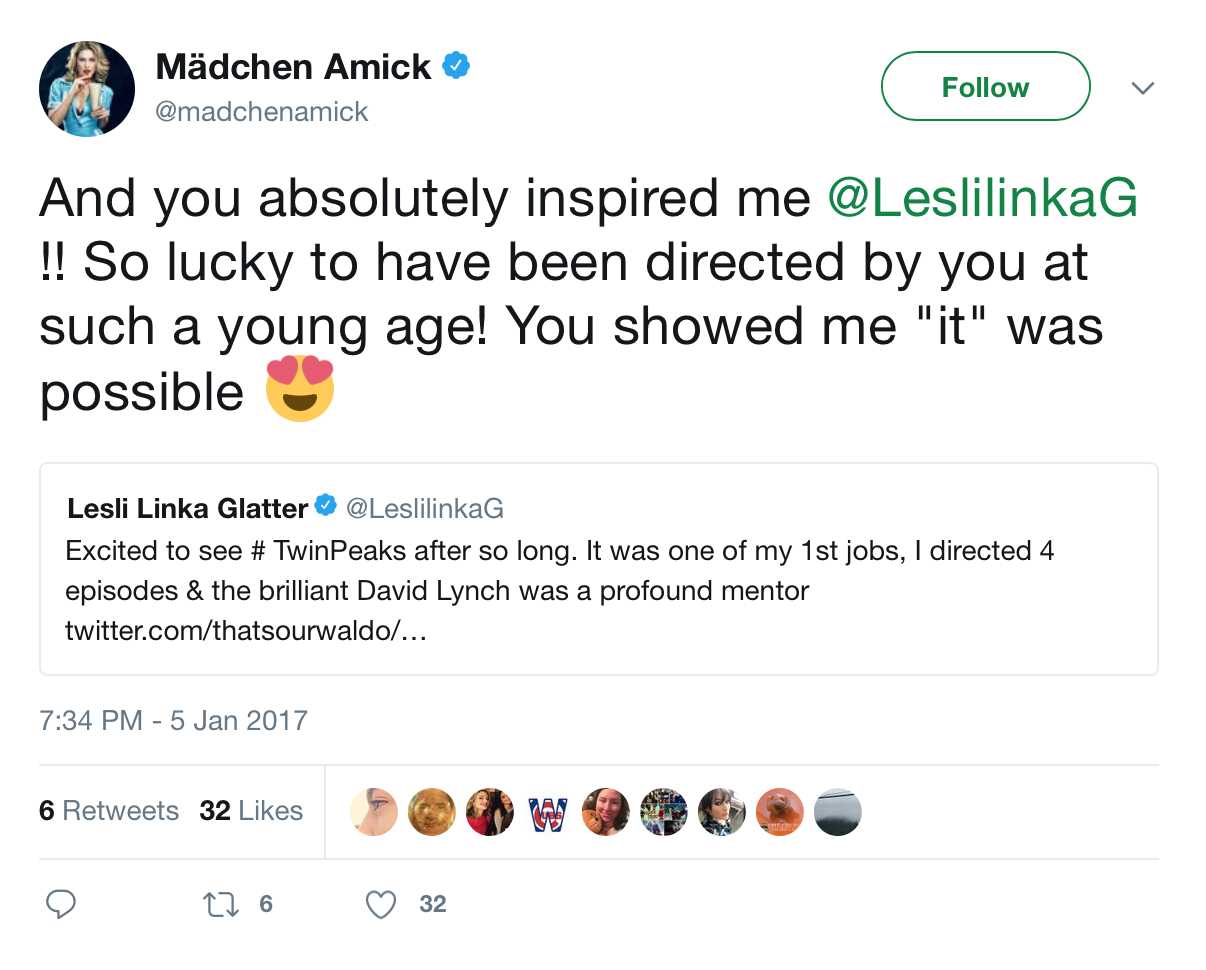 By this point, you should know how I feel about Daniel Palladino.

Most batshit crazy outfit:
Sookie wears her muppet sweater for the third fucking time, but Lorelai still manages to upstage her wardrobe fugliness with this atrocity: 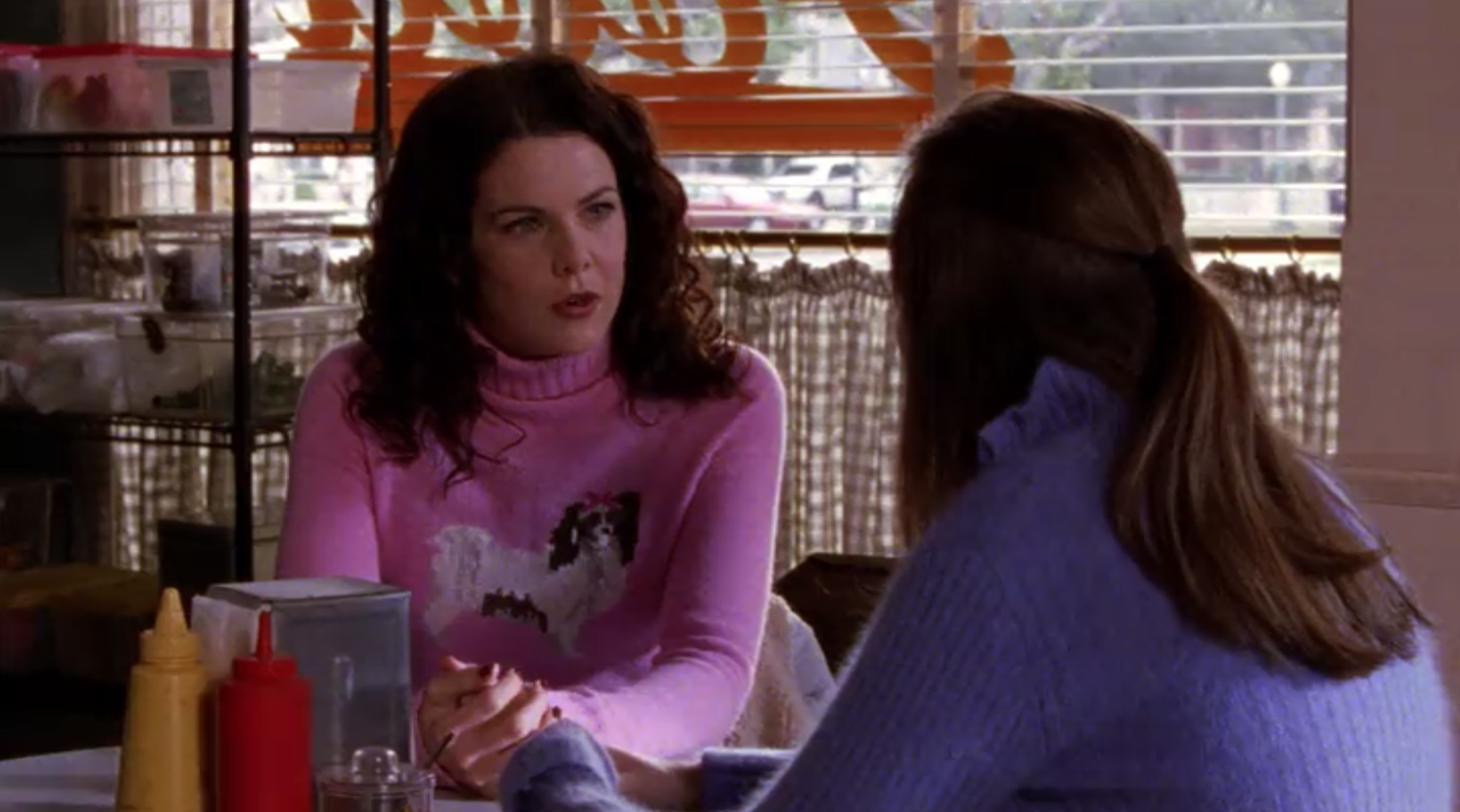 Even Charlotte York Goldenblatt couldn't make this weird, Cavaliar King Charles turtleneck work. Although tbh, I'd like to see her try. Maybe she'd wear it to the dog park in honor of Elizabeth Taylor's birthday, or something. 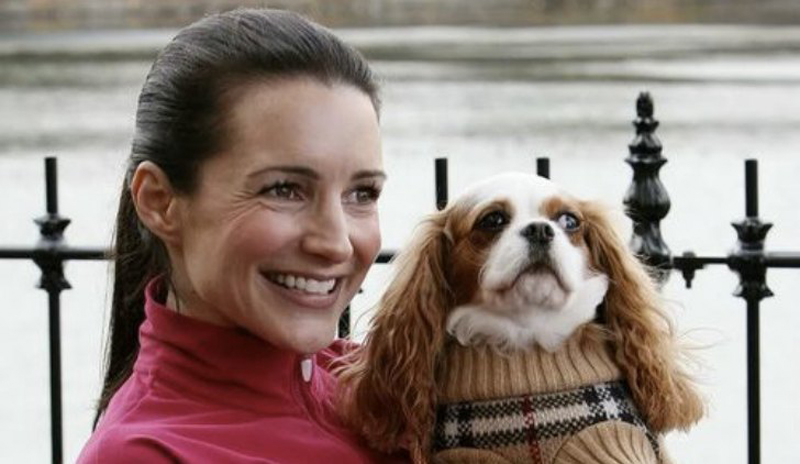 Most irritating Rory or Lorelai moment:
Neither of the Gilmores are particularly irritating. I do think Lorelai's speech to Christopher at the end of the episode is pretty tone deaf, but she seems to mean it sincerely and is truly taken aback when he's upset.

Number of times Rory or Lorelai treat their bff like shit:
Lorelai is decent to Sookie and Rory actually goes above and beyond for Lane, who just has to have the new Belle and Sebastian single.

Best literary or pop culture references:
I love everything about the Volvo conversation at Friday night dinner:

This might be the best thing Richard Gilmore has ever said.

Stars Hollow weirdness:
We find out that Al's Pancake World does a prix fixe menu on Fridays and that the Gilmores like to play bagel hockey at the counter at Luke's Diner. There's also the whole, convoluted CD drop plan that uses Kirk as a distraction (of course) and forces Michel to jog around the town square for over an hour.

Sharpest insult or one-liner:
Rory: I talk normally.
Paris: For the average Willie Nelson roadie, yes, but not for a winning debate team member.

Paris does not fuck around when it comes to debates, WPMs, or doctor-assisted suicide. 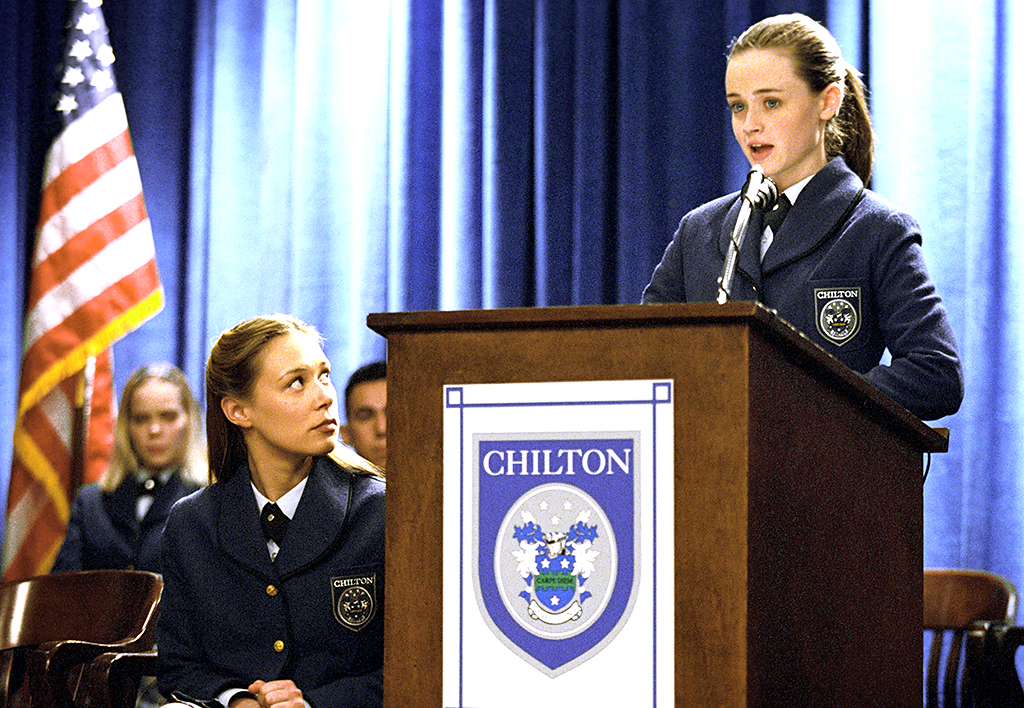 "The goal is euthanasia, a term with its roots in ancient Greek ..."

Books mentioned/books Rory is reading:
Rory mentions Proust, but not a specific novel.

Best song of the episode:
It would be sacrilege not to go with "Legal Man" by Belle and Sebastian.

Thoughts:
Lorelai is kind of a shitty hypocrite in this episode, but in a way that makes sense to me. She feels annoyed/sad/surprised that Chris didn't tell her about Sherry, that he gave Lorelai zero warning before showing up to Rory's debate with her. Although, as Chris points out later, Lorelai hasn't exactly been forthcoming about her past relationships. He brings up Max and rightfully states,

Well, he and I never met. I didn’t even know he existed until late in the game. Hell, I didn’t even know you were engaged until you called me from your bachelorette party. And I wasn’t invited to the wedding – or did my invitation get lost in the mail?

Why does Lorelai expect Chris to tell her everything when she's withheld a significant amount of information from him in the past? Say what you will about their relationship, but I like that Chris calls her out on her bullshit. He doesn't apologize and let her shame him for his comparable behavior. He might not be the kindest or smartest guy (two accidental pregnancies 🤨), but he's not a doormat.

To her credit, Lorelai is friendly to Sherry and receptive to her desire to get to know Rory. I think Lorelai is obviously threatened, but she tempers those feelings and ultimately does right by Chris, which is commendable. I'm not sure that I would have been as chill as her in the kitchen, when Sherry states, "I mean, just because Christopher and I are close doesn’t mean that we need to be close, or friends or anything for that matter." Even if Sherry is just trying to say, "there's no pressure for us to be bffs," it comes off like she wants Lorelai to know how insignificant she truly is when it comes to Christopher's life. 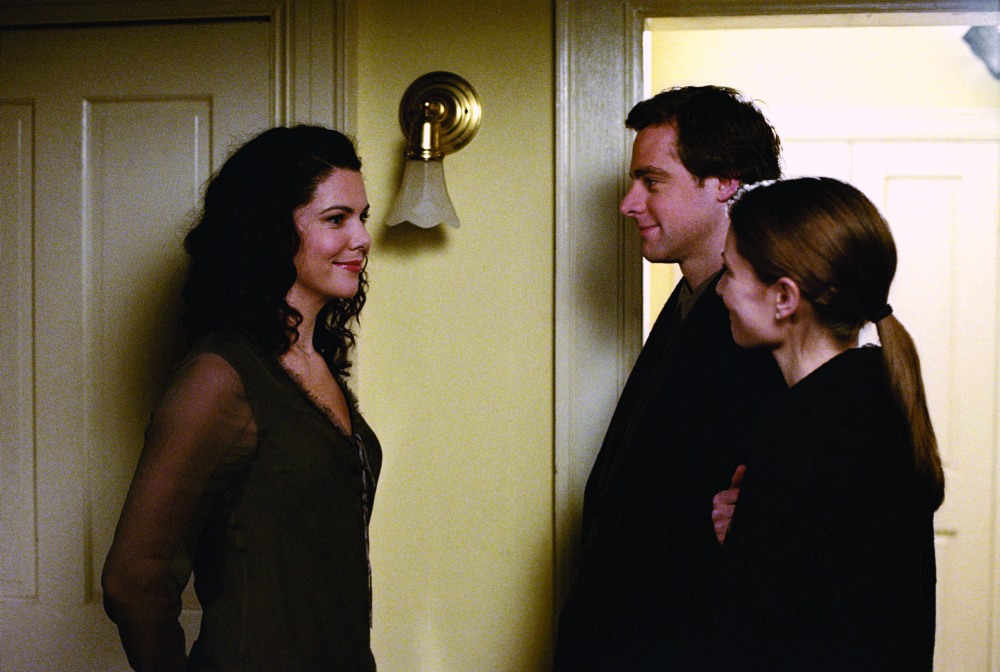 At Friday night dinner, it feels true to character for Emily to react poorly over Rory's absence and I don't for one second believe that Lorelai wasn't anticipating it. Part of me thinks she wanted Emily to freak out so that Chris could see how important he still is in their lives and how major it was for Lorelai to let Rory miss a dinner to hang with his girlfriend.

When they talk in the kitchen, Emily voices some concerns that Lorelai shrugs off, although they do seem to hit a nerve. Lorelai tries to play it cool and and act supportive of Chris, but it seems like Emily's fears match up with Lorelai's, even though she doesn't want to admit it.

Lorelai: What is this about Mom? Why are you so flipped out?
Emily: Lorelai, are you blind or just that humiliated?
Lorelai: Humiliated?
Emily: Christopher gets his life together with that woman.
Lorelai: So, that’s good.
Emily: It should’ve been you!
Lorelai: What?
Emily: Don’t play dumb, Lorelai. You know it too, and deep down I know you’re heartbroken.
Lorelai: I’m not heartbroken.

Later, whenever she talks to Chris at Luke's Diner, she confirms some of Emily's suspicions. Emily might voice things in a way that's harsher than necessary, but she usually does understand Lorelai at a base level. This is what Lorelai confesses to Chris while Sherry and Rory are outside chatting:

Lorelai: I was just thinking, you know, all these years, no matter what my relationship status has been, whether I’ve been dating or hibernating or whatever, I think I’ve always had you in the back of my mind - you know, the prospect of us being together. But this prospect was sort of indefinitely on hold while you, you know, found yourself and, uh, got your personal life together so that you could really be there for me and especially for Rory. But you and I have been so linked in my mind that I think I have unconsciously sabotaged every decent relationship I’ve had, including the one with Max, because I was waiting for you, and I shouldn’t have been. And now that I see that, and I see you settling down with Sherry, I think I can move beyond it.

If Lorelai was truly happy for Christopher and wanted to let him know, she wouldn't make everything all about herself. I don't think she's being purposely manipulative, but she is manipulative. She wants Chris to know that she's been pining for him and that unknowingly, his unavailability/immaturity has been responsible for all of her past failed relationships. Yikes. This certainly seems like something a heartbroken, humiliated person might say, but wtf does Emily Gilmore know. 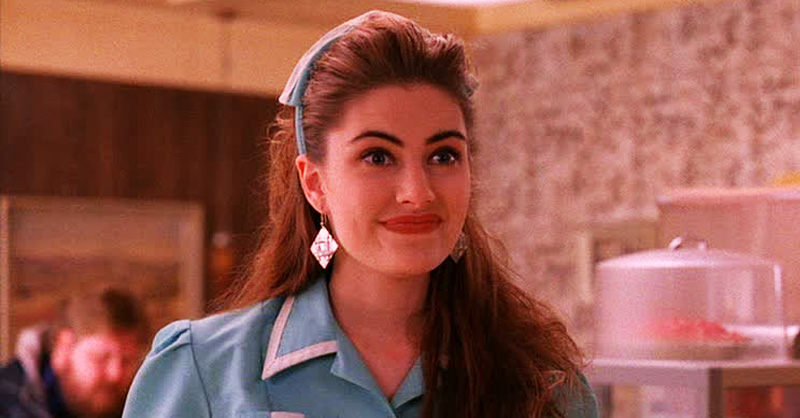 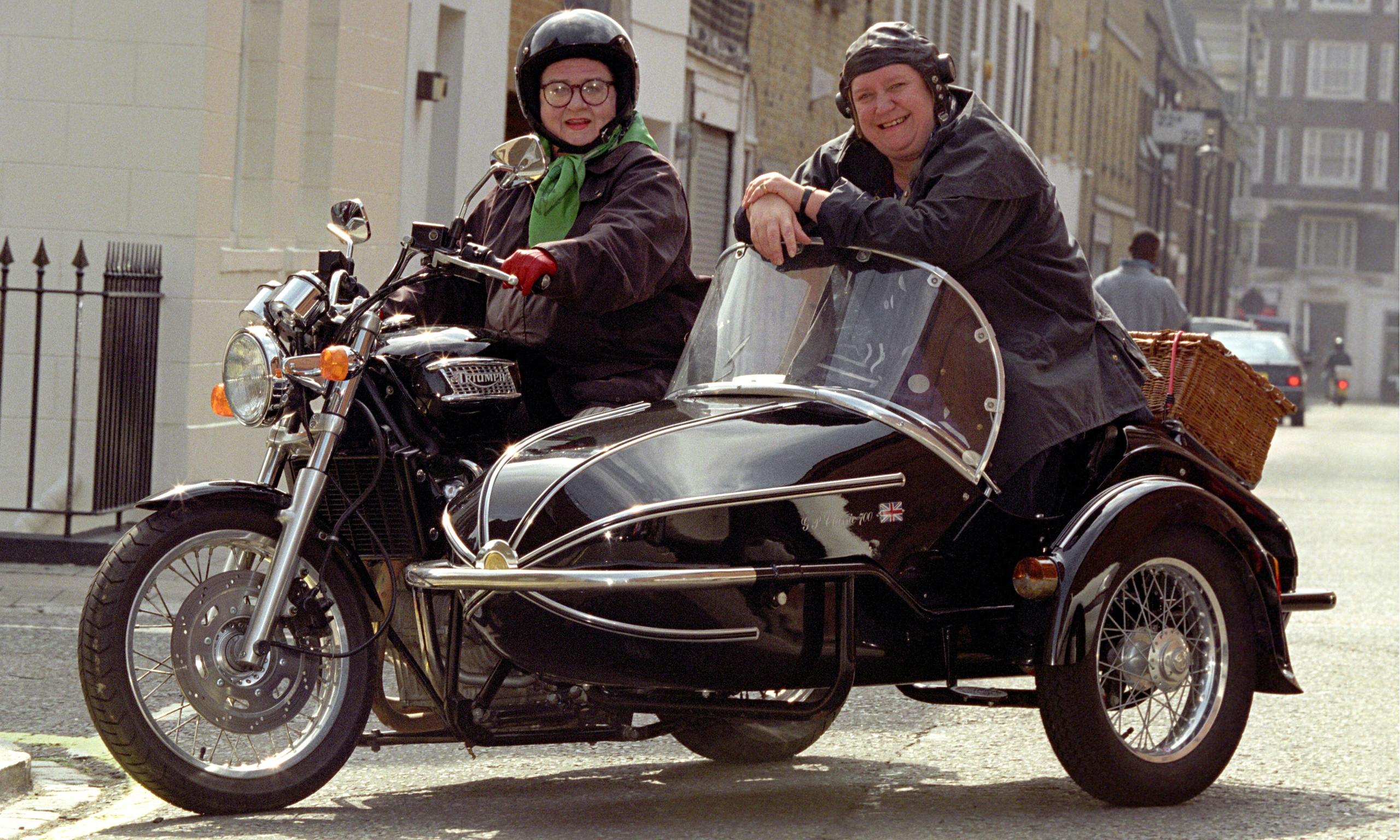 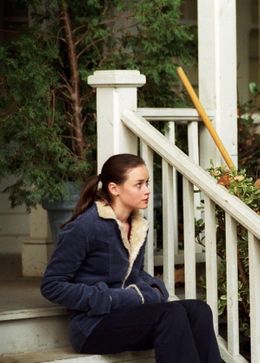