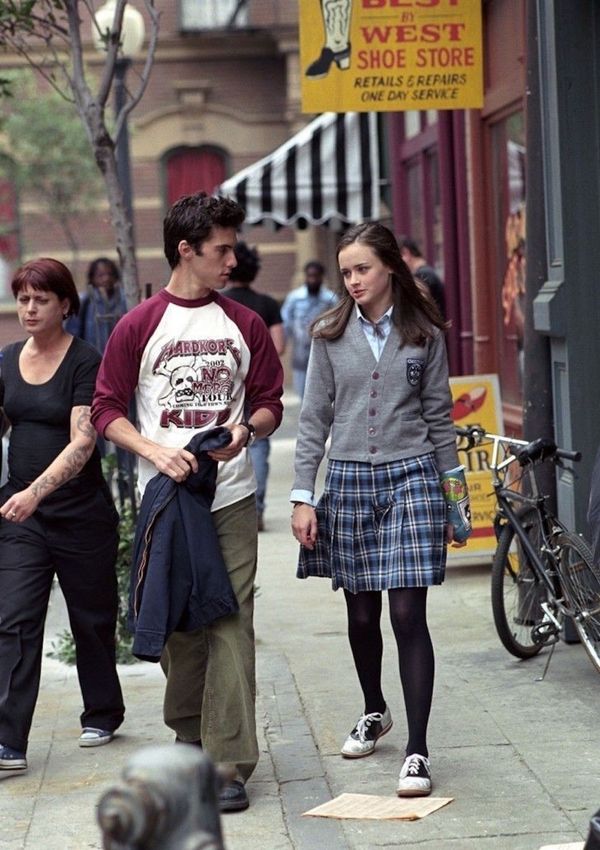 "The Road Trip to Harvard" - If Rory is such a genius, why doesn't she realize that Portsmouth New Hampshire is less than 1.5 hours away from Harvard, her lady boner dream school?
"Dead Uncles and Vegetables" - Lorelai wears another cat shirt, Emily name-drops a ridiculous-sounding friend (Hedy Covington), and Luke's uncle dies and fucks up everything.

She has "GG" directing credits up through the dreaded Season 7.

This is an okay episode for Palladino. The jokes land, the dialogue feels sharp and not too try-hard, and the moments between Lorelai and her parents give me all the feels. The Rory stuff is kind of whatever, but I think it's all worth it for the moment at the end when Lorelai locks eyes with Emily and Richard.

Seth MacFarlane guest stars, which I imagine is thanks to Palladino. (The two worked together on "Family Guy," along with Alex Borstein.)

Most batshit crazy outfit:
I can think of no logical reason why any person would own a blinged out zip-up hoodie with an eagle on the chest. 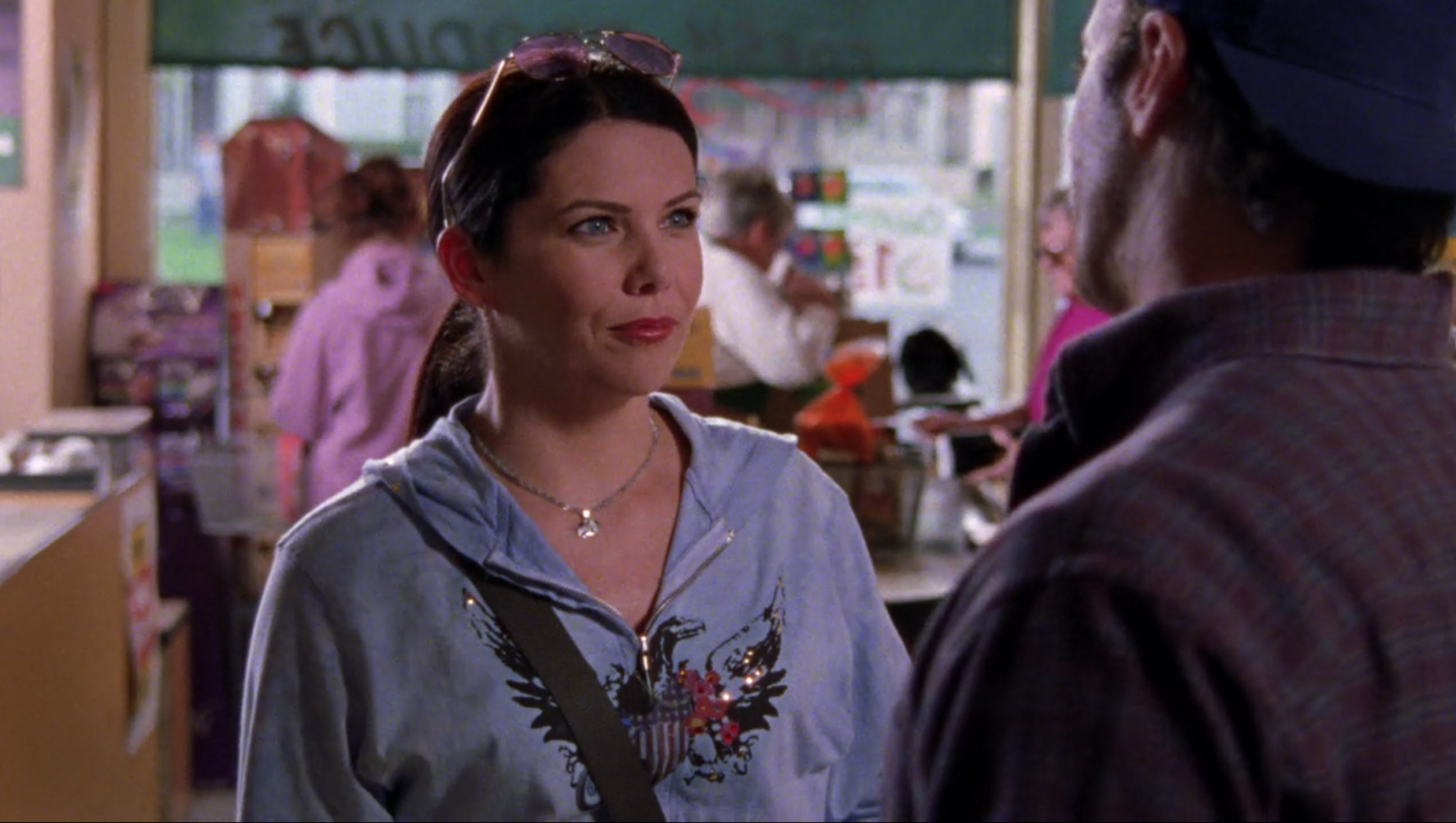 Those pink tinted sunglasses need to go, too. I can't tell what the necklace charm is, but like most of Lorelai's accessories, it looks ugly and cheap.

Most irritating Rory or Lorelai moment:
Lorelai and Rory are both pretty annoying when Dean tells them about going skeet shooting.

Say what you will about Jess, but he would never put up with this fuckery.

Number of times Rory or Lorelai treat their bff like shit:
Luke and Lorelai are still warring, so Sookie cooks everyone a DOPE breakfast - fluffy eggs, bacon, fresh fruit. Because Lorelai is an ungrateful monster, she never once says thank you. I truly don't understand what Sookie gets out of their relationship.

Best literary or pop culture references:
I wasn't aware of David Lee Roth's arrest in Washington Square Park, so I looked it up and wow ... it is embarrassing.

I'm not sure why Diamond Dave was trying to score $5 weed on the streets, but it makes me sad. Can't someone refer him to the Guy? 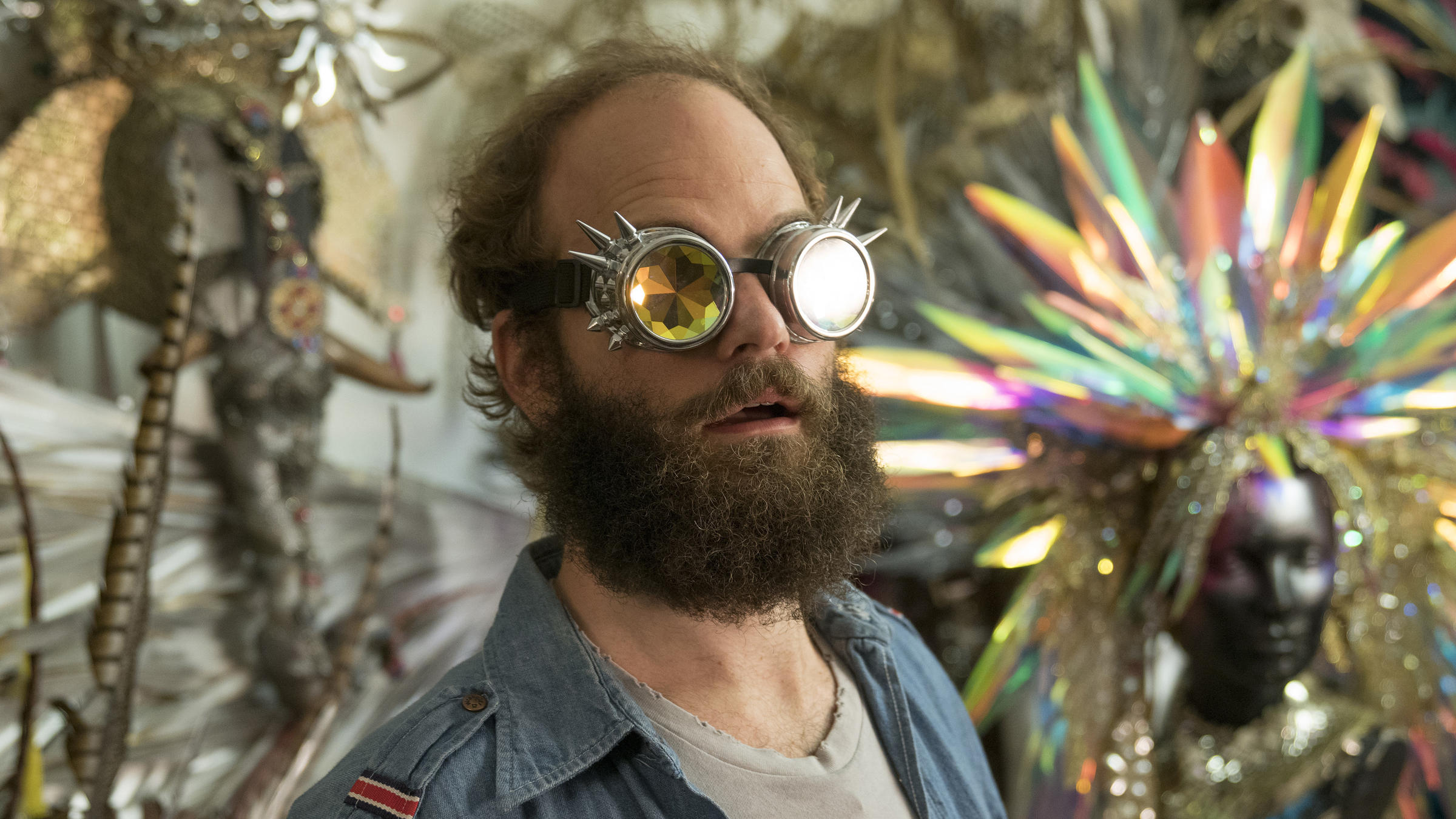 Btw, watch Season 2 of "High Maintenance" if you haven't already. It is fantastic.

Stars Hollow weirdness:
The SH townies are absent. Most of the episode takes place at Lorelai's graduation and in fake NYC.

Sharpest insult or one-liner:
My husband hates Paris, but he's obviously an idiot because she is the best.

Paris: So I told her, "Look missy —"
Rory: You called your advisor "Missy"?
Paris: It was attitudinal. I said I'm not taking AP calculus from Henemen. I'm going with Branch. Branch is a graduate of MIT and Henemen went to Berkley. Berkley! I mean, he may have majored in math but what did he minor in? Bean sprouts? Forget it. And I'm telling my advisor all this, Mrs. Schlosser, and I looked down in her trash can and there’s this half-eaten banana in there. Nothing else. And I pictured her sitting in the shoe box of an office eating a banana all by herself and I almost felt sorry for her, but then she questioned my judgment about Berkley so I eviscerated her. I mean, she was welling up at the end, but she had the decency to hold it in until I was gone. I have enough faculty recommendations to run for student council, so I don't need her anyway. My locker’s this way.

As always, Liza Weil's line delivery is on 👏🏻 point.

Books mentioned/books Rory is reading:
Christopher includes two books in Lorelai's graduation basket: "What Color Is Your Parachute?" and "The Portable Nietzsche." Rory mentions "The Lottery" to Lorelai on their way to the mystery breakfast and Lorelai references "The Celebrated Jumping Frog of Calaveras County." When Rory finds him in Washington Square Park (because this is realistic), Jess is reading "The Electric Kool-Aid Acid Test." 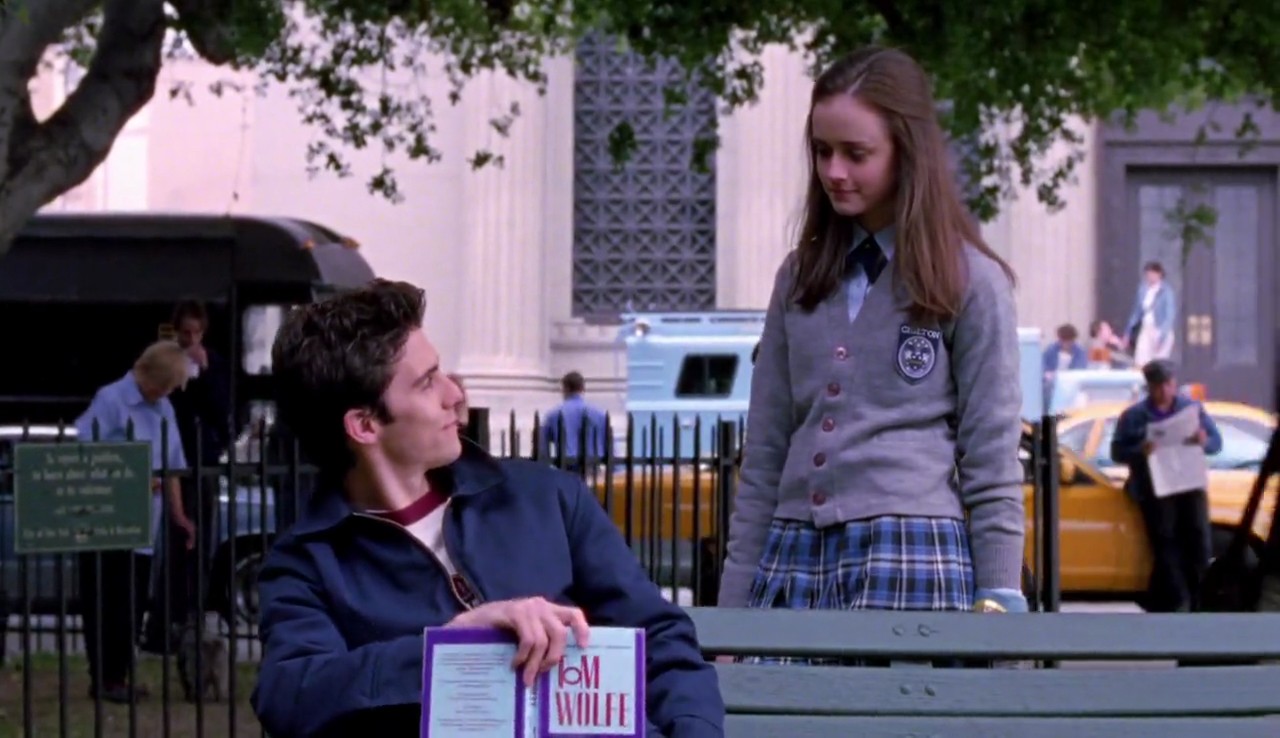 I hate to break it to you, Jess ... this book actually kind of sucks.

Best song of the episode:
This episode has so many great songs. I love the B-52's, but I have to go with "Monkey Gone to Heaven," one of my favorite Pixies songs on "Doolittle."

Thoughts:
It's not super plausible for Rory to impulsively hop on a bus to NYC and randomly find Jess in Washington Square Park, but I'm willing to suspend my disbelief. Rory's always the good, nice kid who makes responsible decisions, but no one can be that way all the time. Even the nerds sometimes need to rebel by stealing nail polish at Target and smoking weed in a cemetery.

When Rory locates Jess, the two have a great day together that feels totally natural and really throws her awkward dynamic with Dean into stark contrast. Rory is always stiff and slightly on edge in Dean's presence. If he were to unexpectedly kiss her, body language suggests that she'd duck and push him away. With Jess, she has undeniable chemistry! She looks like she's constantly waiting for him to make a move and he always looks like he's on the precipice of making a move. The mutual attraction is palpable. 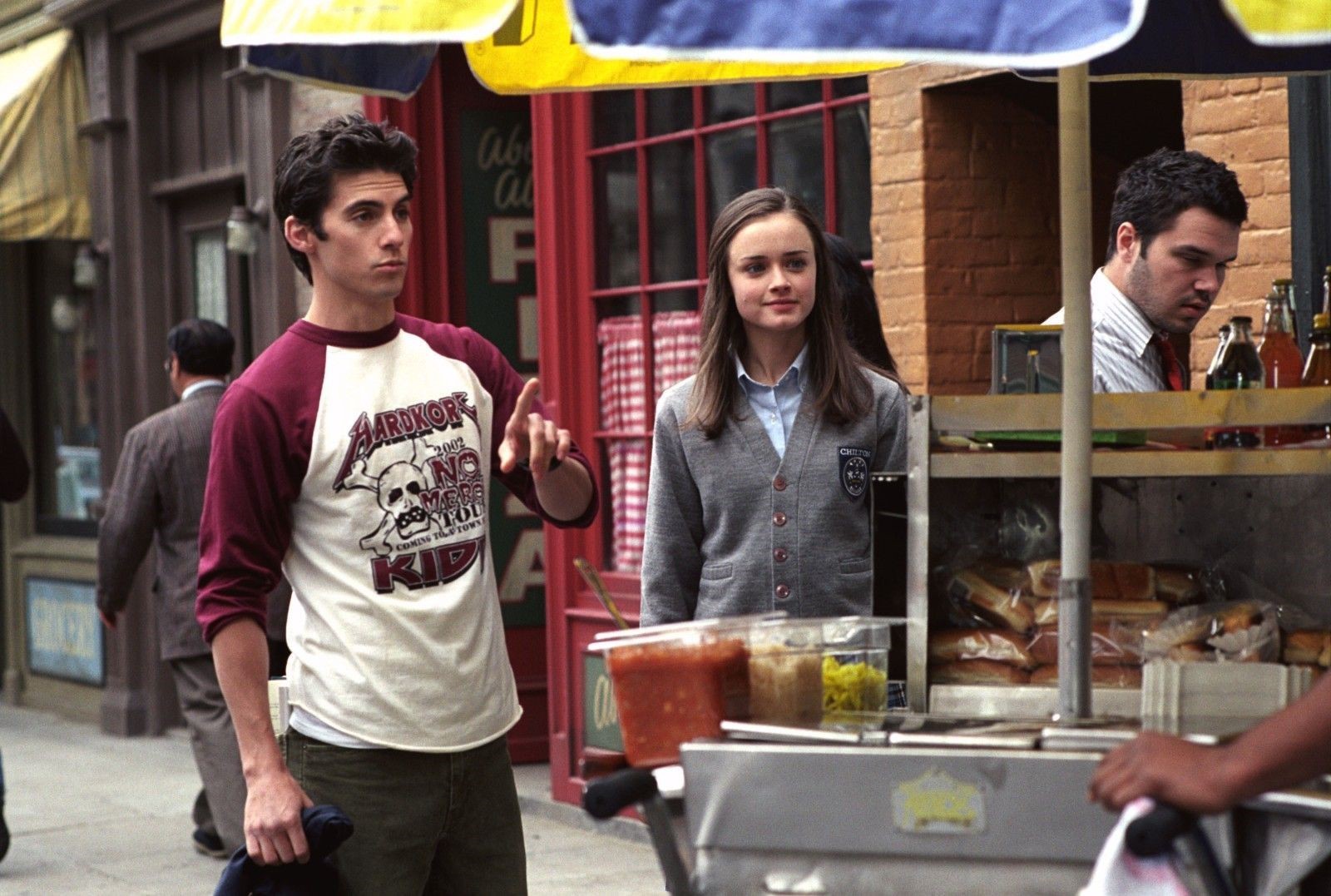 After a great day of eating hot dogs and buying records (the Go-Go's first album, signed by Belinda!), Jess walks Rory to fake Port Authority. As she finds a seat on the bus, they have this exchange through the window:

Finally, at the end of Season 2, Rory's character arc begins to take shape. She still hasn't fully admitted it to herself, but she's made her affection for Jess clear. After she misses Lorelai's graduation and rushes home to apologize, Rory tells her this:

"I am sick, I'm ill, I'm cracked. This is not who I am. If I were to write this down in my diary and I would read it, I would be like, Who is this freak? This isn't me. This isn't my diary. I wouldn't do this. I wouldn't skip school when I have finals coming up to go see a guy that isn't even my guy and end up missing my mother's graduation, which I wanted to be at so badly. That's someone else. That's someone flighty and stupid and dumb and girly. And, I mean, I missed your graduation, which is the worst thing I could have possibly done. I mean, I hurt you and I had to spend hours on a stinky bus next to a guy that was spitting into a can, just thinking about all of the minutes that were going by that I wasn't at your graduation and they were hurting you, and they should have been hurting you because it was so selfish of this person who wasn't me to do what she did."

Lorelai knew it deep down, but now she finally has confirmation that Rory likes Jess as much as he likes her. To her credit, Lorelai tries to gently help Rory sort out her emotions, but Rory is in rant mode and uninterested in any self-reflection that isn't negative.

While Rory is stuck on a bus, next to the can spitter, Lorelai graduates from community college with an associate's degree in business. Emily and Richard show up, accompanied by Raul, the videographer, and for maybe the first time ever, are visibly proud of Lorelai. They both tear up a little bit as Lorelai steps to the end of the stage and moves her tassel to the left.

The moments before and after the graduation are honestly kind of throwaway, but they're worth it for this single moment. Lauren Graham, Kelly Bishop, and Edward Herrmann are all fantastic and this single scene is the clear episode standout. 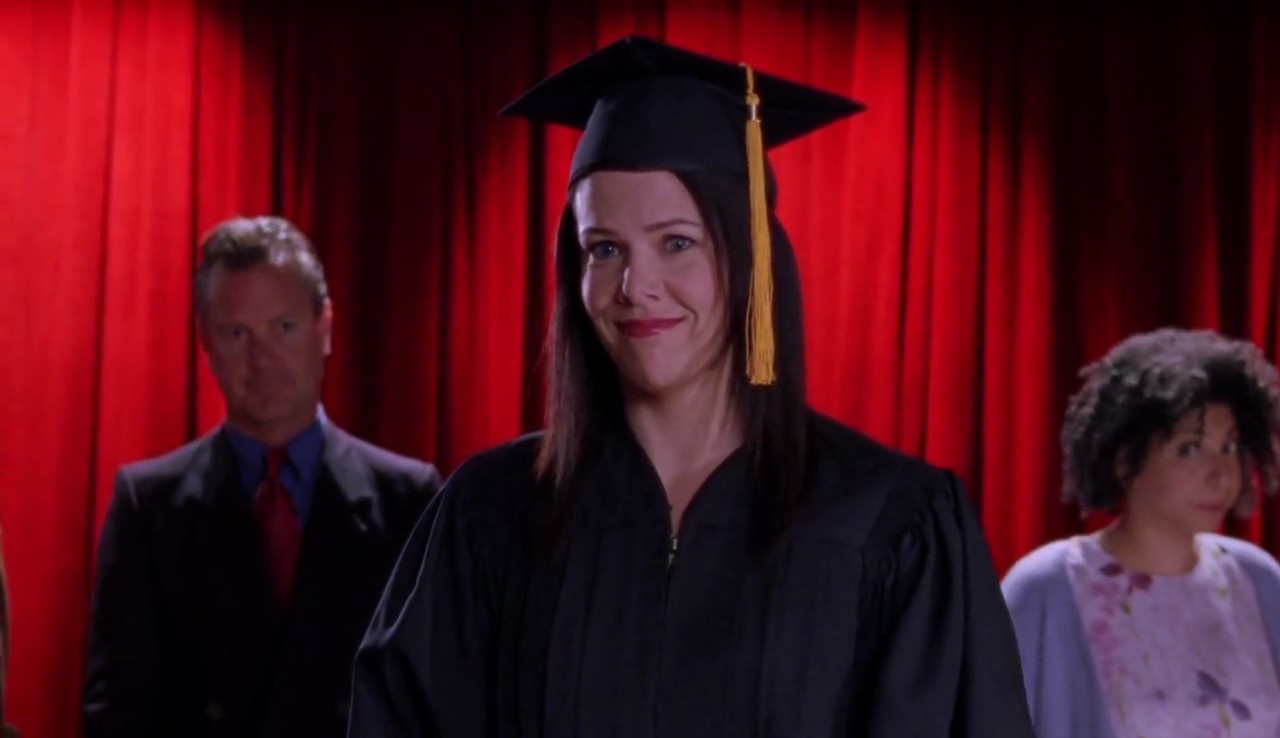 The people in the background look highly skeptical, though.