Directing and writing credits:
Written by Elaine Arata, directed by Bruce Seth Green. Both are new to me and have pretty underwhelming IMDB pages. Elaine Arata also wrote episode 1.20 of "GG," "P.S. I Lo...," along with a few episodes of "7th Heaven" and "The Secret Life of the American Teenager" (insert No1Curr meme).

The only notable project Bruce Seth Green has worked on is "Buffy the Vampire Slayer." The rest of his resume is weird dog movies and other shit I don't care about. I'm not judging, I just have nothing to say about either of these people.
​
Most batshit crazy outfit:
Lorelai's Americana tribute outfit in the opening scene would make Trump supporters everywhere proud. She's wearing a shirt that has a half red, half blue body and a dissected, glitter American flag graphic. The sleeves are lighter blue - for contrast, and to heighten the jigsaw puzzle nature of the overall "look," I suppose. The back of the shirt is solid blue, with a tiny blue star print and one, large, blue-and-white striped star graphic in the middle. If this sounds like a big mess and way too many competing elements all mashed into one top, then you are an astute observer/correct. The jeans are Levi's that are typical of the era. They might look good on a rail thin supermodel, but on anyone with even a semblance of an ass, they do no favors. And let us not forget Lorelai's red, glitter-adorned bandana!

Rory (who also has no room to talk when it comes to fashion) tells her mom she needs to "open up the top drawer and take out everything that you’d be embarrassed to be wearing during a car accident." If Lorelai actually had any idea about how to dress her body or modicum of taste, this exercise would result in the removal of all top drawer clothing items. Pity...

Most irritating Rory or Lorelai moment:
Lorelai's reaction when she hears about Luke's ex-girlfriend is pretty damn ridiculous. Get a clue, Lorelai. If you were in therapy, you'd be able to admit to yourself without problem that you have a crush on Luke. It's nbd.
​
Number of times Rory or Lorelai treat their bff like shit:
Fucking Lorelai makes Sookie give up their 9th row aisle seats for nosebleed heaven so Rory's dumbass Chilton friends can go to the concert. Sookie didn't seem to mind (she never does), but Lorelai didn't consult her on the decision to give up the tickets, which was a pretty dick move.

Best literary or pop culture references:
Rory: Jeez this stuff is like tribbles.

Oh, so Rory can randomly drop "tribbles," but Luke is the one they make fun of for being a Trekkie? Mmkay.
​
Stars Hollow weirdness:
The rummage sale plot provides for some pretty enjoyable townie moments.

Lane: Um, kittens in the toilet poster? [holds up poster]
Rory: Another one?
Lane: This one’s signed.

Miss Patty gives away the drums she danced on at the Copacabana in 1969. Luke buys refrigerator magnets shaped like sushi for a nickel. Someone donates "a big furry purple thing that could be either a hat, a toilet paper cover or some kind of dirty hand puppet." It's delightful.
​
Sharpest insult or one-liner:

I use this line at least once/week. Also, that's Cleo King! "Deadwood" fans should recognize her as Aunt Lou. She's also been in a ton of other shows over the years - "Six Feet Under," "Sons of Anarchy," "The West Wing," etc.
​
Books mentioned/books Rory is reading:
None. Rory does make a reference to "Macbeth" in casual convo with Lane, though:

Lane: All three of them huh?
Rory: Double, double toil and trouble.
Lane: Well, it should make for an interesting afternoon.
Rory: With the pricking of my thumb, something wicked this way comes.
Lane: You’re doing very well in the Shakespeare class aren’t you?
Rory: Not bad.

Meh. Any asshat who paid even a little bit of attention in 9th grade English should be able to get this reference. Unimpressed.
​
Best song of the episode:
"Hero Takes a Fall" by The Bangles. Despite Jess's sass in Season 2, The Bangles are fucking awesome. Even Paris can't help but dance to this catchy tune!

The Bangles broke up in the 80's, but got together for a reunion tour the same year that Season 1 of "GG" premiered (2000) and put out a new album in 2003. This episode would have aired during sweeps week in February, which makes The Bangles kind of an odd choice. I'm sure I didn't know who they were at the time, but I guess my mom probably did. Maybe The WB's "GG" advertising was more geared toward moms? I really don't remember.
​
Thoughts:
I love this episode because it gives us the first real glimpse of Paris and Rory's friendship. Up until this point, they've been nothing but enemies, competing over grades and (in Paris's mind) Tristan. But at The Bangles concert, Paris actually smiles and even tells Rory, "I think this is the best night I’ve ever had."

It's clear she doesn't have much of a connection with Madeline and Louise. When they're all at the Gilmore house studying, Paris tells them,

We have a debate to organize here and this conversation is quickly veering towards the subject of french kissing and glitter eye shadow - trashy or trendy? And I for one have no intention of being humiliated in front of the whole class because we were forced to study in the middle of a carnival and you two couldn’t keep your eye on the prize! I want to win and I’m going to win.

Paris has zero desire to sit around, talking about Dean's height and kissing style. Madeline and Louise seem like the typical kind of obligatory friends that pop up in elementary school and stick around much longer than they should due to shared history and the awkwardness that comes with actually ending a friendship. Paris probably keeps them around because they're loyal and nonthreatening. Madline and Louise are pretty, but they're not smart, so Paris doesn't have to worry about them making her feel insecure and encroaching on her territory; Rory, on the other hand, poses a direct threat.

I'll write more about Rory and Paris's friendship as it progresses and will certainly add to Mallory Ortberg's argument that their relationship is the one worth shipping (as much as I love Jess in the later years). For the record, I am also 100% aligned with her on lesbian Emily Gilmore:

“It’s called late-in-life lesbianism, Lorelai,” Emily would say sharply, “and I certainly would have thought you of all people had heard of it.”

Mallory Ortberg, I love you. I'm writing this blog post hungover on a Sunday afternoon and I wish you were my friend IRL so we could hang out and watch "GG" together. If you ever see this post and want to chill, please get in touch.

Aside from the Rory/Paris friendship development, this episode isn't terribly exciting. We find out about Luke's ex-girlfriend, Rachel, who is "Elle Macpherson pretty" as opposed to Catherine Zeta-Jones or Michelle Pfeiffer pretty. Lorelai is obviously jealous because she has a thing for Luke but for some reason, can't admit it to herself or to Sookie, even though it's completely obvious to everyone, even Emily Gilmore.

Interview with Sofia Due Rosenzweig 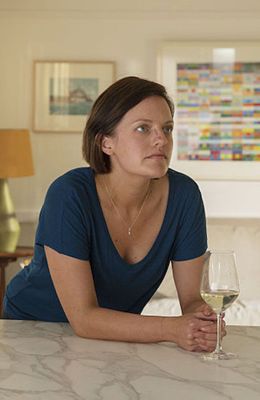