Very quickly, Midge's Logan Huntzberger-esque treatment of service people becomes intolerable. First, there's Antonio (Victor Verhaeghe), a doorman at the apartment building who is for some reason helping lug and unpack all of Midge's storage unit shit. I've never been fancy enough to live in an apartment with service staff, but these tasks seem way outside the job description. From the storage unit, Midge flits around to several small business people, using her charm to increase various lines of credit. She knows everyone's names and sells her proposition better than Don Draper at his peak. It would be admirable if it wasn't so disgusting. Broke bitches should learn how to budget and do without luxuries like milk delivery and professionally cleaned garments. Instead, Midge forges a path that could eventually land her in Anna Delvey con queen territory.

Another bad Midge decision is her new bedroom setup. In an attempt to avoid constant reminders of Joel's penis/their breakup, she angles all of the furniture away from the door, creating a lot of awkward maneuvering and prompting Imogene to ask, "Is this cubist or ...?" It reminds me of when Dean breaks up with Rory in S1 of "Gilmore Girls" and she rearranges the furniture in the living room so that the couch is no longer facing the TV.

I'm simultaneously annoyed by and impressed with Midge's fake it 'til you make it mentality. My anxiety would never allow me to willingly place myself on the precipice of financial ruin like this. The insane bedroom layout feels like an outlet for the doubts that Midge is trying to suppress. Deep down, she's afraid that she can't do it all on her own and that she needs someone like Joel to help her pick up the pieces. I understand that her old apartment is gorgeous and sentimental, but if she's trying to start over, she should bide her time in Queens, save some money, and find her own place. Midge is setting herself up for failure, but her ruin probably won't be too terrible considering this is a Palladino production.

To make matters worse, Midge invites Rose and Abe to move in with her. I don't imagine Moishe will throw them all out on the street when Midge inevitably fails to make the monthly payments, but he seems like the type of man with a hard cap on sympathy for women. On the other hand, he's probably not keen to have the Weissmans back with him in Queens, so maybe Midge really has masterminded the perfect situation that allows for maximum freeloading.

Rose is thrilled about the prospect of moving back in with Midge; Abe is less enthused. Despite his new bohemian career at the Village Voice (with Chris Eigeman AKA Digger), he is very much a fan of patriarchal traditions and can't stomach the idea of his daughter supporting him. Instead of being appreciative, he whines about having to use "the vomit bathroom" or the "overloaded Esther diaper poopy bathroom." I don't like it when Abe says/does shitty things to the women in his life. I'm incapable of disliking Tony Shaloub, so it conjures up complicated emotions. I don't want to hear him telling Midge that no man will want her now that she owns her own apartment. Give those lines to Kevin Pollak!

Of course, image conscious Rose is keen to move into the apartment, but not without crafting a cover story that makes her and Abe look less like schnorrers. In a move that Emily Gilmore would approve of, she takes public credit for buying back the apartment, turning Midge into the charity case. (Apparently, they also had a backstory for the move to Queens that involved a fictional seedy landlord named Mr. Crink.)

The stress that Midge has been trying to compartmentalize bubbles to the surface when she awakens to Abe maniacally typing a story in her bathtub while Rose rearranges the entire kitchen. Realizing that her morning milk hasn't been delivered, Midge tries to steal her neighbors' pint and gets caught. Everyone plays dumb when she conjures up some bullshit story, but a parting line about how nice it is that her parents bought back the apartment for her makes me think they are hip to the near theft. Drawing attention to Midge's alleged support from her parents is basically passive aggressive speak for "fuck you, loser."

After tearing the misogynistic milkman a new asshole and learning of Shy's engagement, Midge phones Susie mid-breakdown. Without Susie as Midge's foil, this show would quickly become grating. Midge is temperamental and spoiled in a way that is often unrelatable, especially for anyone more pragmatic. She's the type of person who keeps pushing to get what she wants to the detriment of anyone who stands in her path. She's self-centered and pushy in a way that is probably necessary for women who want to break into male-dominated businesses like comedy (at least in 1960). However, coupled with her silver spoon sense of entitlement, it doesn't always make her the most empathetic character. Susie brings the show's tone closer to reality.

One of my favorite parts of the episode is when Susie stalks Harry Drake (David Paymer) in Central Park so that she can pick his brain on her management troubles. Along with Midge's career and personal setbacks, Susie needs help figuring out what to do about Sophie Lennon (Jane Lynch), who checked herself into an inpatient mental health facility after the "Miss Julie" flop in S3. In typical Palladino fashion, mental health issues are laughed at in a way that borders on offensive. Lynch's antics mostly make up for shit like the woman with the completely bandaged face and all of the screaming.

When Susie visits Sophie at the facility and asks her to sign the contract absolving their partnership, this is what she writes:

During their conversation, Susie realizes that Harry actually tried to warn her about Sophie in his "own fucked-up kind of way." In turn, Harry admits that had things worked out with "Miss Julie," Susie would have gone down "a fucking legend." Considering their relationship started as a fierce rivalry that involved kidnapping and blackmail, Susie and Harry now have a surprising mentor/mentee dynamic. She feels comfortable sharing her problems with him and he isn't afraid to tell her things she doesn't want to hear, like that she should fire Midge as a client or at the very least, get her back out on stage so that she can move past the Shy debacle.

As a testament to her respect for Harry, Susie even takes his advice, trying (and failing) to get Midge a slot at the 5th Street Comedy Club. In lieu of booking the gig, both women drunkenly heckle the shitty comedians on the marquee.  At one point, they alternately yell "hack" at Noah Birnbaum (Noah Gardenswartz), a guy who tells stale Jewish jokes. They get thrown out of the club when Midge gets on stage instead of Billy Jones (Kevin Bartini), who Susie locked outside, and performs a shorter, funnier version of his "I hate my wife" set.

While arguing with the club's proprietor in the street, Midge starts warning men not to go inside and offering to show them a good time for a cheaper fee. The cops see this, think she's a prostitute, and back to jail she goes. I would be fucking pissed if I were minding my own business in the communal cell, waiting to post bail, when a loud woman desperate to be the center of attention started blathering on about her own myopic bullshit. Naturally, Midge takes a shine to a first timer named Gloria (Kayli Carter) and makes Susie bail them both out. Perhaps due to internalized homophobia, Susie seems disgusted by Gloria and convinced that she's a "hooker." I wonder if Susie's sexuality is ever going to come into play during the run of this series.

When they swing by Gloria's work so that she can grab money to pay back the bail, the big reveal is a bustling burlesque club that, shock upon shock, has a tired old white male comedian phoning it in with ba-dum-tss jokes between performances. Remember how Midge told Susie that she wanted to change the comedy business? Remember how Harry told Susie that money-making clubs make their money off alcohol? We all knew this was coming thanks to the first look trailers, but oy vey ... I'm slightly worried. Maybe the Palladinos will take inspiration from "The Life and Hard Times of Heidi Abramowitz" and/or this episode of "That Show with Joan Rivers":

Although Abe is a dick to Midge in the first half of the episode, he comes around by the end. His work at the Voice genuinely excites him, but the job only pays enough to buy one or maybe two eggs per week. Midge reminds him that he's doing something he loves and that money isn't everything. As they toast to art with arms linked, the camera cranes up and 10cc's "Art for Art's Sake" plays. It's a nice moment, but the Virgo in me is fixated on these lines of dialogue:

Midge: Okay, Papa, I know this is a shock, but look at it this way. You are doing something that you love.
Abe: Yeah. The both of us. Pursuing our art. Although one of us pursuing banking would've been smart.

After all, someone has to pay for the Zabar's and the afternoon jelly doughnuts. 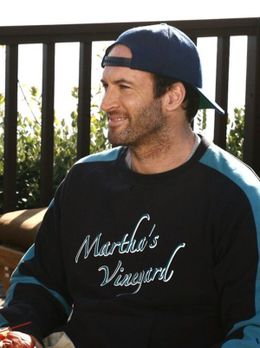 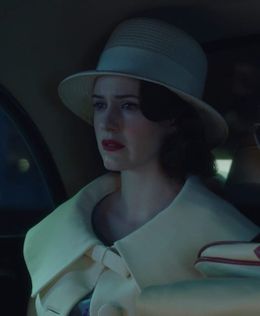