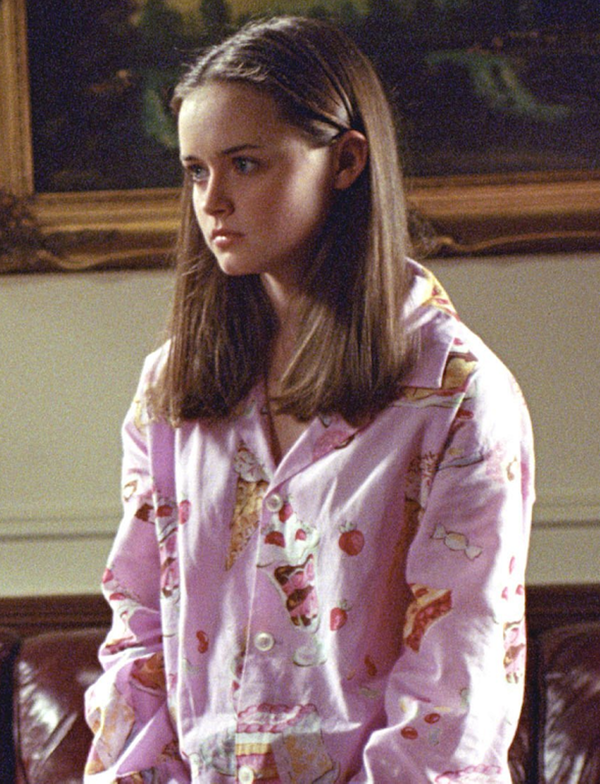 Directing and writing credits:
Directed by Dennis Erdman, written by Joan Binder Weiss. The most notable credit on Erdman's resume is for "Running with Scissors," the "Sex and the City" episode where Natasha finds out that Big and Carrie are lying/cheating assholes and Miranda is sexully attracted to a sandwich (Miranda 4 ever).

This is the last episode of "GG" written by Weiss, although she's credited as the executive story editor up through the end of Season 2. You may also remember her as the writer of the following episodes:

Most batshit crazy outfit:
I typically try not to post screenshots from Netflix because they're a grainy mess, but look at this fucking shirt that Lorelai wears to the Chilton booster club meeting: 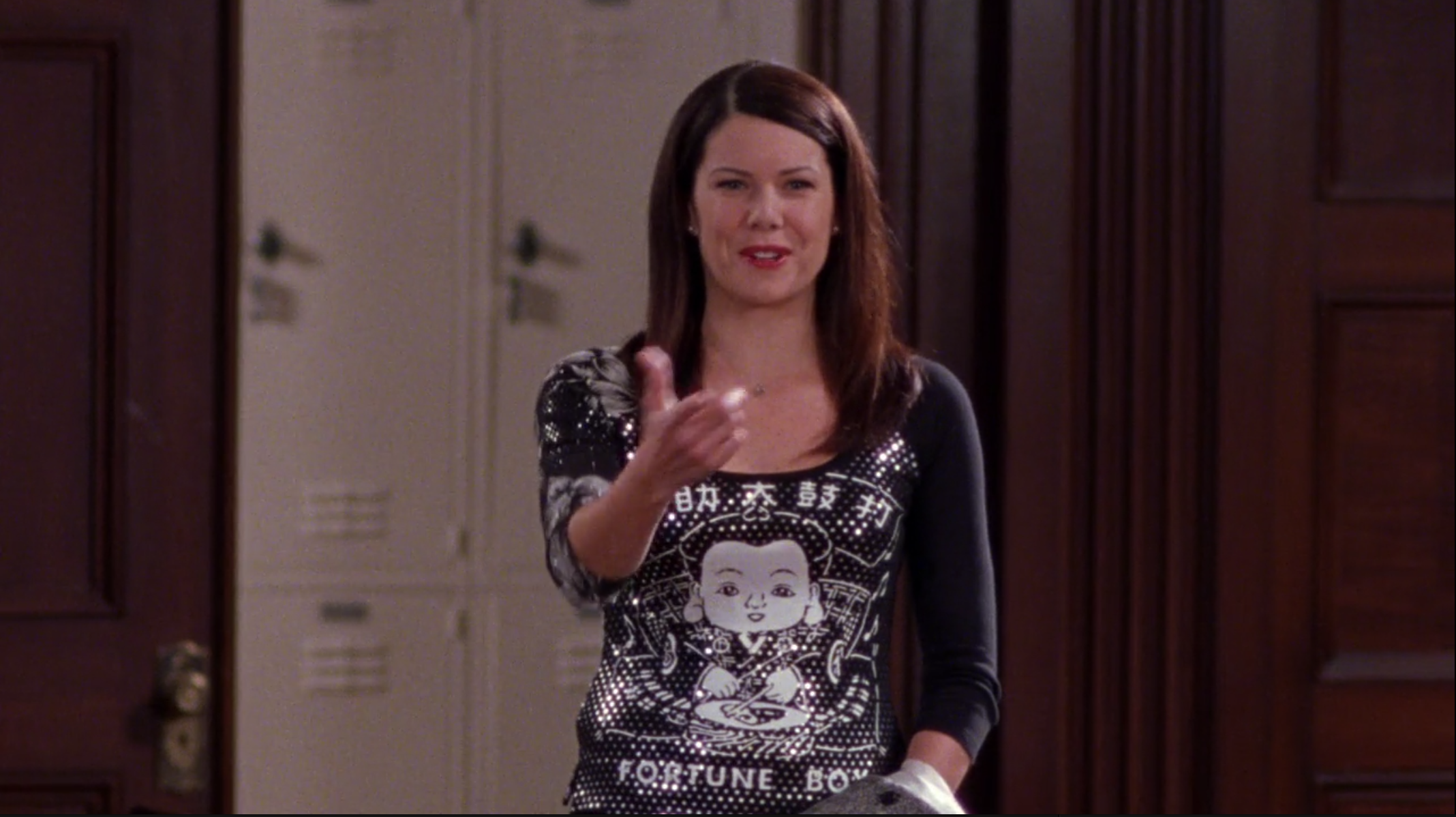 It's a mess of fake lace, sparkle, and racist wtf-ery. Someone needs to douse it in kerosene and give Lorelai a stern lecture on cultural appropriation. As the seasons progress, it only becomes worse. Remember the episode in Season 7 ("That's What You Get, Folks, for Makin' Whoopee") when Rory's Asia trip gets cancelled and Lorelai decides to make "crazy Asia" for her? Yeah. That could have been prevented if someone intervened at this crucial moment.

Most irritating Rory or Lorelai moment:
I HATE when Lorelai grills Luke about his conversation with Ava at the fashion show.

Lorelai: Yesterday I saw you talking to Ava, you know, she's in my booster club?
Luke: Yeah, I know who she is.
Lorelai: Oh, good. Well, good. So anyhow, I saw you guys talking alone and it seemed kind of private, and she mentioned earlier that you didn't make her, you know, gag, so I just figured you guys were making some sort of plans to hang out. And see, the thing is, I just think it would be a little weird if you started dating a Chilton mom. Look, I know I have no right to say anything to you, but it's just, um, if you did date her, well, I'm in the Booster Club with her, which means that I'll hear things, and I don't know, it's just, I'd like to keep that Chilton life separate from my Stars Hollow life, so if there's any way that you could not date her, that would be really great.

After Luke calls her out and explains that a) his personal life is none of her business and b) he was just giving Ava directions, Lorelai STILL doesn't apologize. She tells him his directions are bullshit and storms out of the diner. This behavior isn't cute and it's something LG really needs to discuss in therapy.

It's also hella disrespectful for Lorelai to call Michel, ask him for a favor, then continuously ask him to hold while she deals with Rory's bullshit.

Number of times Rory or Lorelai treat their bff like shit:
This is the second episode in a row with minimal Lane and Sookie interactions.

Best literary or pop culture references:
Francie: Well, no one has proof. It's just folklore.
Ivy: Like Snow White and Rose Red.
Francie: Or Mariah Carey's crack-up.
Lem: Have you heard her fan message recently? She's fine and is currently staring at a really beautiful rainbow.

I forgot all about Mariah Carey's "Glitter" breakdown and fell into a black hole of articles after Francie mentioned it. I think the tl;dr is that Tommy Mottola is pond scum and the entertainment business is a brutal place for women. I wholeheartedly agree with Mariah on this statement:

All I know is I just want one day off when I can go swimming and look at rainbows and like eat ice cream.

Stars Hollow weirdness:
Kirk is now a mechanic, and reveals "I carried a duffel bag and ate lunch by myself my entire school career, and I turned out just fine." In Season 6, we find out that Kirk has managed to save a quarter of a million dollars for a down payment on the Twickham house, so according to our capitalist society, he's not wrong.

Sharpest insult or one-liner:
Rory: You look like Nancy Reagan. 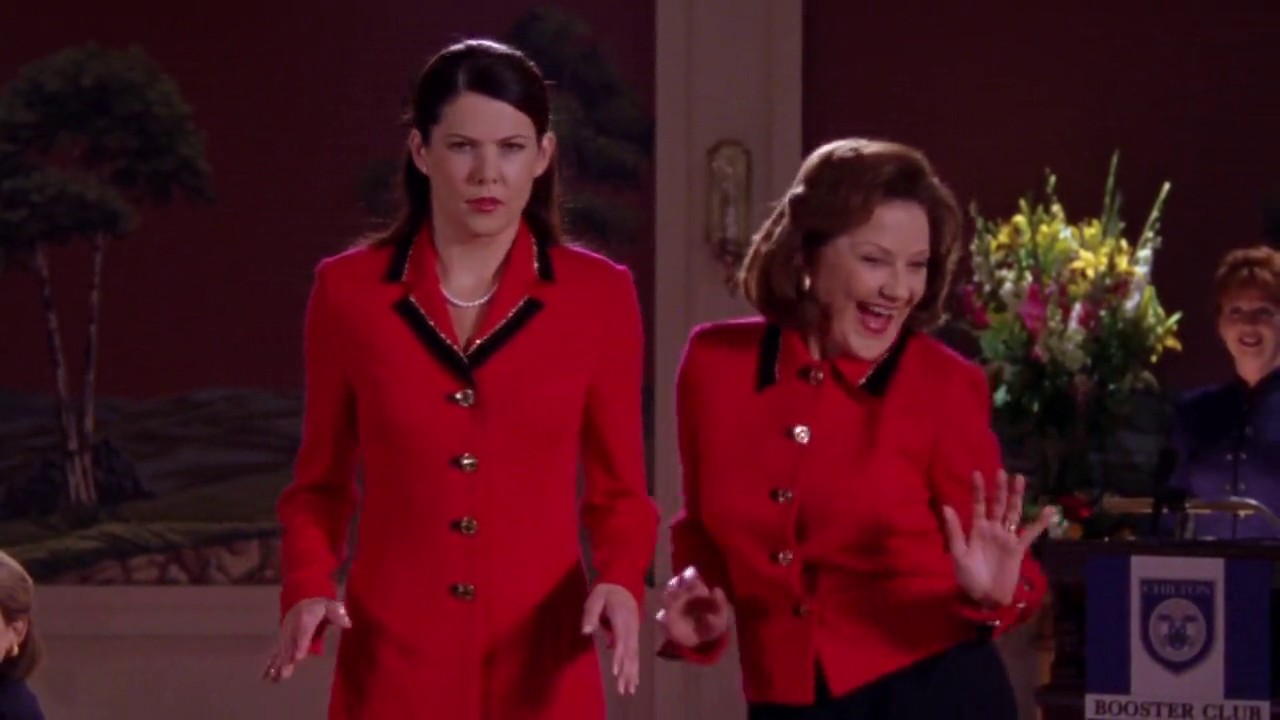 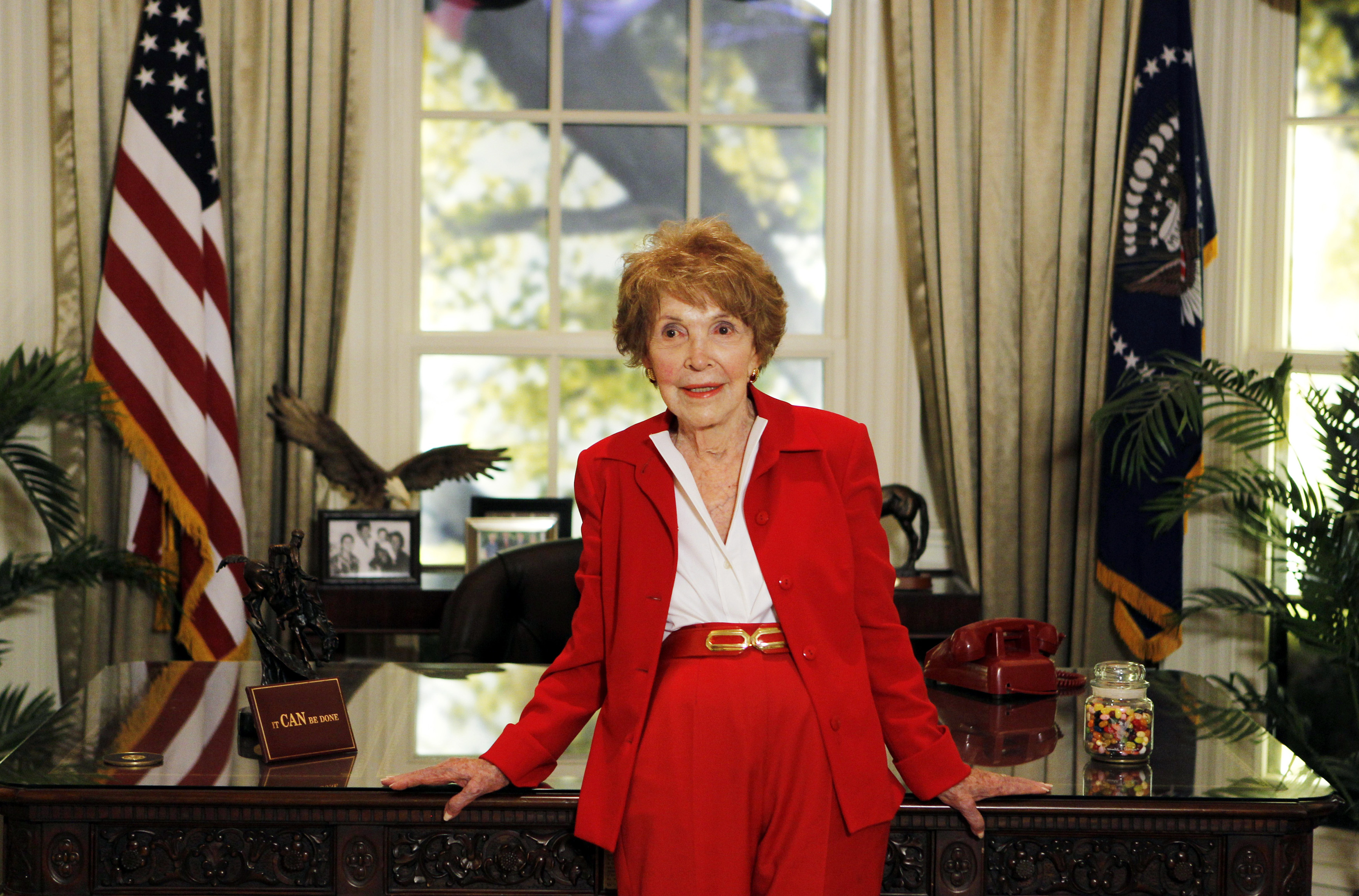 Nancy Reagan loved a sharp red suit and even wore one to her own funeral. First lady style is typically boring and conservative (minus Michelle Obama and I guess Jackie Kennedy), so I would consider a comparison to any of them an insult.

Books mentioned/books Rory is reading:
Rory finally reads some shit in this episode! Good job, Rory. These are the books that Rory tries desperately to shove into her backpack:

Rory reads "The Collected Stories of Eudora Welty" by Eudora Welty when she sits on the couch and waits for her "kidnappers" to arrive. When Headmaster Charleston busts her for bell ringing, she mentions "The Divine Secrets of the Ya-Ya Sisterhood" by Rebecca Wells.

Best song of the episode:
"Know Your Onion" by The Shins. Rory listens to this song on her Walkman when the guidance counselor (who is OMG BLACK!) startles her and requests a meeting. The Shins actually make a cameo appearance on "GG" in Season 4 ("Girls in Bikinis, Boys Doin' the Twist").

Thoughts:
If my (hypothetical) daughter's private school told me I wasn't participating enough in parent organizations, I would remind them how much I pay them and tell them to fuck off forever. I don't think any amount of shaming could guilt me into hanging out with the women from the booster club. Ava, aka Mary Alice Young from "Desperate Housewives," is the most tolerable of the bunch, but even she makes obnoxious, tone-deaf comments. She also fetishizes Luke in a way that makes me, and obviously Lorelai, uncomfortable.

Ava: Him.
Lorelai: Who?
Ava: There, man with tools, who is that?
Lorelai: Oh, that's Luke.
Ava: Luke, I like Luke.
Lorelai: What?
Ava: Oh, he's adorable. And he looks strong, is he strong?
Lorelai: Oh I don't know. I don't think he's gonna be in a sideshow anytime soon, but he can get the lid off a pickle jar.
Ava: Is he single?
Lorelai: Well, uh yeah, he is single.
Ava: What kind of women does he like?
Lorelai: I don't know, ones with heads. You know, I don't really know what Luke's taste in women is. 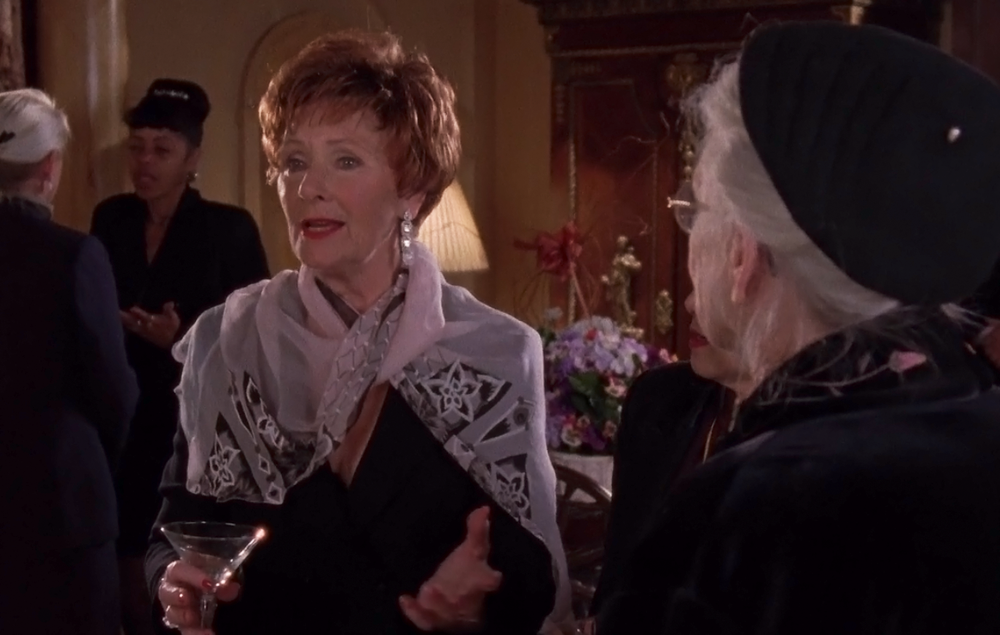 It's distasteful for Ava to openly salivate over Luke at a function for her daughter's school, but it's straight-up contemptible for Lorelai to then grill him over his interaction with Ava and tell him she'd prefer if he didn't date her. What the hell, Lorelai? I don't understand how she's so in denial over her crush on Luke and her jealousy over his potential date. If I were Luke, I would have found Ava's number and asked her out just to spite Lorelai.

While Lorelai deals with booster club bs, Rory discusses homecoming and other riveting topics with the Puffs, Chilton's secret sorority run by Francie, a character the "GG" writers whip out when they're completely devoid of ideas and need to waste time. As the show progresses and Rory moves on to Yale, The Life and Death Brigade replaces the Puffs (and other Chilton nonsense) as the new writers' room crutch. If I were watching this show as it aired, I probably would have tuned out after two boring episodes in a row ("Presenting Lorelai Gilmore" is another tedious episode). I refuse to believe any viewer is on the edge of her seat, wondering about whether or not Rory gets suspended for ringing a fucking bell.

The only good part of this episode is Emily and her adorable runway walk. Girls just wanna have fun, dammit. 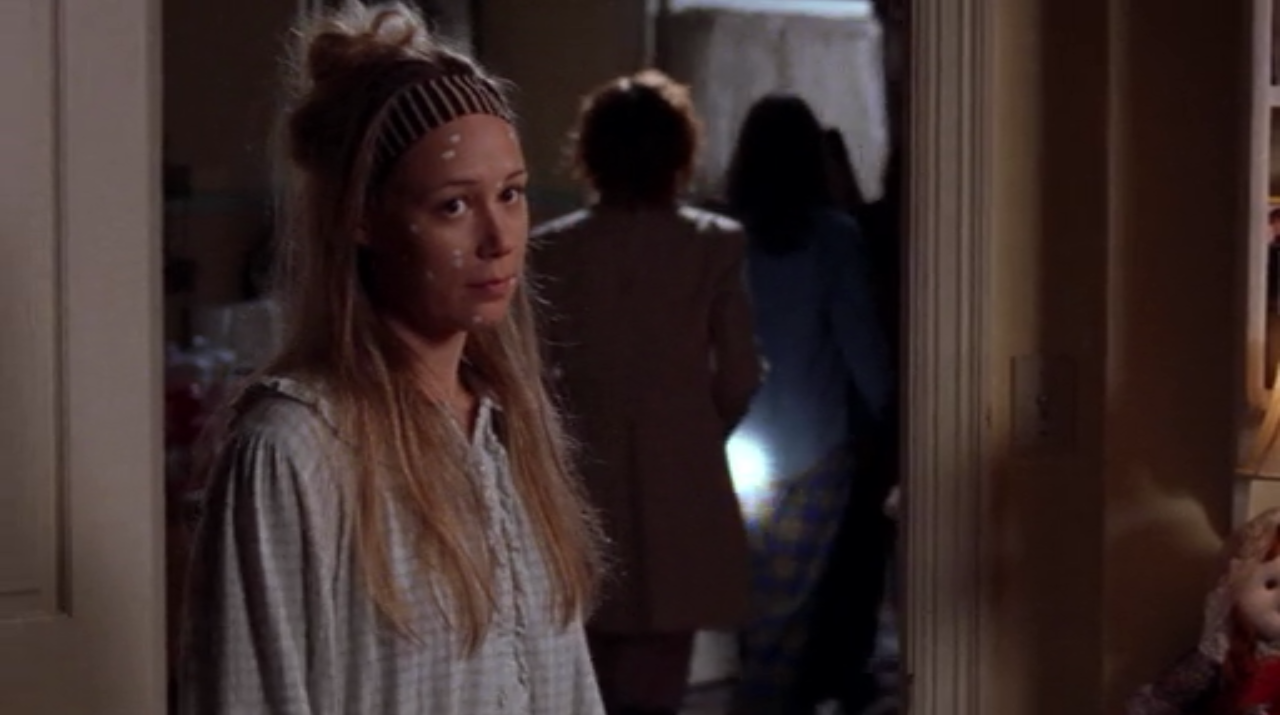