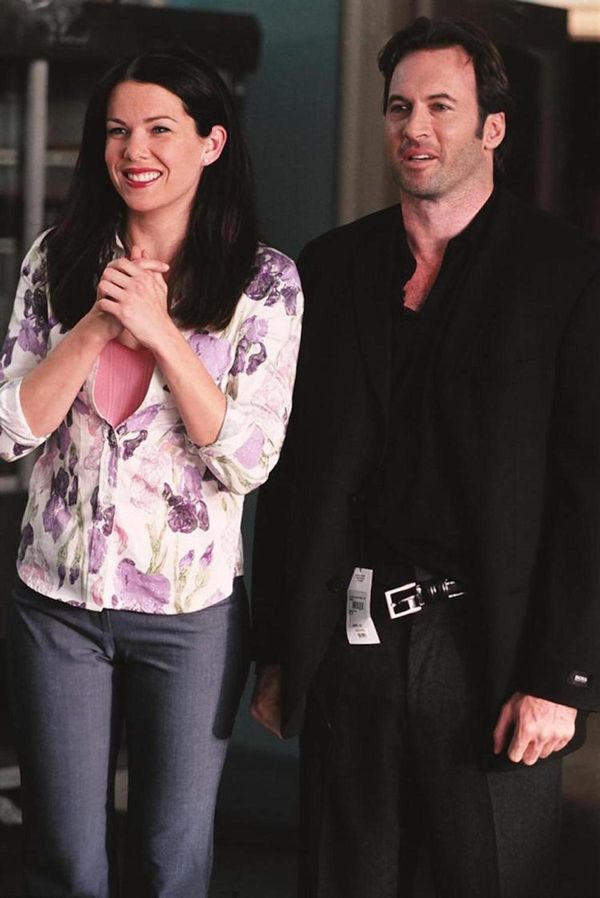 Directing and writing credits:
Written by Elaine Arata and Joan Binder Weiss, directed by Lev L. Spiro. You should remember them from previous episodes:

Most batshit crazy outfit:
Lorelai's floral button down looks like something you'd find in the old person section at Macy's. And I would know, because I used to work at Macy's. We didn't technically call it "the old person section," but that's how I referred to the little area with Alfred Dunner, Alfani, Karen Scott, etc. I don't want to sound like an ageist dick, but it's basically a fact that no one under the age of 65 shops these brands.

I bet Lorelai's shirt is by Karen Scott and was very popular with old, suburban ladies at the time this episode aired. To give it some sex appeal, Lorelai only buttons it about halfway up and layers it over a ribbed, pink cami. She then kicks it up another notch by pairing it with generic blue dress pants and her trusty leather blazer. And you know what? This isn't even one of Lorelai's worst outfits! In fact, it's probably the best of the worst. Someone needs to nominate this bish for "What Not to Wear."

Most irritating Rory or Lorelai moment:
Lorelai totally deserves Rory's wrath for neglecting to mention Max but overstepping boundaries and telling him all about her "difficult break up situation." If my mom ever did something shitty like that, I would for sure do the nastiest thing I could think of to get back at her... which is exactly what Rory does when she runs off to Richard and Emily's without telling Lorelai first.

Number of times Rory or Lorelai treat their bff like shit:
Rory is a mega bitch to Lane and it is completely undeserved. Sure, Lane should have told Rory that Dean is her study partner, but she only withheld that information because she thought it would hurt her friend. Also, she knows she fucked up and tries to make amends by meeting Rory's bus with coffee (which Rory later throws into the trash 😐) and an explanation. Thankfully, they hug it out at the end of the episode.

Best literary or pop culture references:
Lorelai: Okay, you've been in this mood for a week now and while I love the unexpected ups and downs of motherhood, I've got to say I'm tired of Goofus and I'd like my Gallant back.

Whenever I think of Goofus and Gallant, this Mallory Ortberg article immediately comes to mind. This part is golden:

At Goofus' core, there is a nest of lies and hornets and old 7-11 receipts. He literally does not have human lungs. Just hornet-infested receipts.

Stars Hollow weirdness:
Luke initially thinks it's a good idea to buy Rachel a pair of kitty potholders that meow. I refuse to believe Luke is this clueless and terrible at buying gifts. Also, how the hell does Le Chat Club stay in business? Is there really a rush on cat merchandise in Stars Hollow? I have three cats and even I don't really own many cat-themed possessions. It's puzzling.

Sharpest insult or one-liner:
This whole conversation between Richard and Emily is perfect:

"Dipsomaniac" sounds so much better than "alcoholic." I'm adding that one to my vernacular.

Books mentioned/books Rory is reading:
Rory is reading "Ulysses" by James Joyce whenever Lane pops out of Doose's with salt and vinegar chips, gum, soda, the New Yorker, and dental floss. Lane runs all of Rory's errands for her because she's too much of a chicken to go into the market and Rory repays her with bitchiness. It's upsetting.

Mr. Medina discusses "The Art of Fiction" in English class. Rory isn't paying attention, but that's okay because James Joyce is boring. I know I'm supposed to pretend to like him to seem cool, but holy fuck... if it hadn't been assigned reading in college, I would have never finished "Ulysses."

Karen Blixen's "Out of Africa" is also mentioned, as it's one of the potential gifts Lorelai picks out for Rachel. She's never read it, but feels pretty confident in her recommendation because Rory told her it's amazing.

Best song of the episode:
There's no outside music in this episode. And actually, I'm not even sure if there were "la-la's." They've become white noise for me at this point, so I can't say definitively.

Thoughts:
I find it kind of refreshing when Rory is an outright jerk instead of a repressed, passive aggressive mouse. When she's pissed at Lorelai over Max Medina, she simply says so (albeit, in the most biting way possible). Her confrontation with Lane is a little ridiculous, but the general sentiment is justified:

Maybe I'd get over it a little quicker if everyone weren't so busy running around trying to protect me from all the bad scary things in the world.

Someone could write a very strong Communication Arts thesis about how everyone's undying need to protect Rory is what causes her to grow up into a stunted, sad, clueless adult. If Rory had received more criticism and less praise during her teen years, maybe she wouldn't have stolen a fucking boat when Mitchum Huntzberger told her she doesn't have what it takes to be a journalist. Maybe she wouldn't have slept with her married ex-boyfriend to feel better about herself after one bad date (urine mints) and one rejection (cool laundry basket). If the people around her had forced her to toughen up a bit, she would have adapted out of necessity.

In this instance, Lorelai tried to save Rory hurt feelings by withholding her Max news until the Dean break up sadness has subsided. She and Rory have this exchange:

Lorelai: When I was in junior high, I had a boyfriend, Todd something or other. Not a soul mate, but I was crazy about him and he dumped me. I was completely crushed and I could do nothing except lie around and cry and listen to Air Supply, very low point in my life. Two days after the breakup my best friend Nevina Cutler got back together with her boyfriend, Randy something or other, who had dumped her days before Todd dumped me. And she was so happy and gloaty and couldn't stop talking about how great it was that she had her boyfriend back that it made me feel horrible.
Rory: The end. Let's go.
Lorelai: Look, I didn't want to be Nevina Cutler, okay? You were so miserable about Dean. What was I supposed to do? Walk in and say, "Sorry about you and Dean but I got Max back and aren't we happy." Would that have been good?

No, Lorelai, that wouldn't have been good. But you know what is also not good? Neglecting to tell your boyfriend, who you know is a sensitive, try-hard, chatterbox, that you haven't talked to your daughter about your romantic reconciliation. If you're going to keep a secret from someone, at least do the most basic legwork to prevent leaks. It's sad to me that a woman in her 30's doesn't seem to have a firm grasp on secret keeping 101. Maybe she should sign up for a course at the Learning Annex.

And Max! Why the fuck would he ever think it's appropriate to talk to Rory about her personal life at school? Her grades aren't suffering, she's not suicidal, and she hasn't approached him for advice, so he needs to mind his own business. How does Lorelai miss the thousands of red flags Max consistently throws up over the course of their messy relationship? He is clearly DESPERATE for a relationship/pseudo-father role and it makes me sad. Get a dog, Max. Train for a marathon. Maybe read a long, boring book you haven't had time for in the past. Do literally anything that helps you stop being such a stage five clinger. Where are his friends? They need to grab him by the collar, throw some cold water into his face, and tell him to stop embarrassing himself.

At the end of the episode, he makes Lorelai feel bad about not telling any of her friends that they're back together. It is uncharacteristic for Lorelai to not tell anyone about the relationship, but a normal person would probably take the hint and realize, "hey, she's just not that into me." A healthy person in Lorelai's position would (hopefully) be self-aware enough to think, "wow... I haven't told any of my friend I'm back with Max. Maybe it's because I don't really like him and don't see this lasting very long." But instead, Lorelai lies to Max and to herself. Max chooses to believe her because he's pathetic, but his antennae are up (which is why he proposes to her in the finale).

This episode makes me so angry that I don't even know if I have the stamina to discuss Luke and Lorelai. These two are in complete denial about their feelings for each other but pathetically transparent to everyone around them. I have close male friends but you know how many times I've gone clothes shopping for them? Zero. Because it's fucking weird! Especially if that male friend has a girlfriend. Rachel seems like a nice person and it's shitty of these two to continously lie to her about their feelings for each other. Her face when she walks into the diner and sees Lorelai dressing Luke crushes me. I've been there, gf. Take your beautiful hair and effortless coolness and get the heck out of Stars Hollow. You deserve better.