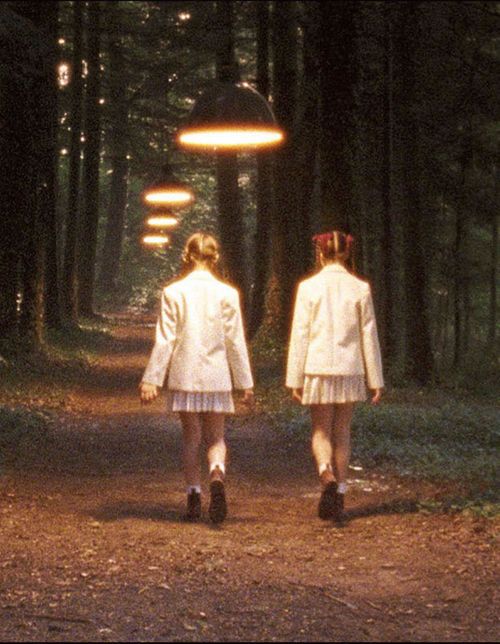 Vibe:
Equal parts Graham Greene's "The End of the Party" (1929), Ingmar Bergman's "Fanny and Alexander" (1983), Peter Weir's "Picnic at Hanging Rock" (1975), and Dario Argento's "Suspiria" (1977). "Innocence" is surreal, eerie, and beautiful, with a lingering threat of danger creeping in at every turn. It's not a horror movie, but the pacing makes it feel like one.

Best time to watch:
This would be a great movie to watch while stoned. The cinematography (by Benoit Debie) and styling is absolutely meticulous and it would be great to have laser focus on every detail while watching.

At a theater screening. I've searched high and low and haven't been able to find a good transfer anywhere online. I would love to see a 16mm screening, but (stupidly) no one ever talks about this film, so it seems unlikely to happen.

Ideally, this film would screen in the middle of a deserted forest on a projector screen. The trees would be strung with fairy lights and all moviegoers would have cozy blankets and mugs of mulled wine. This is the locale I'm picturing: 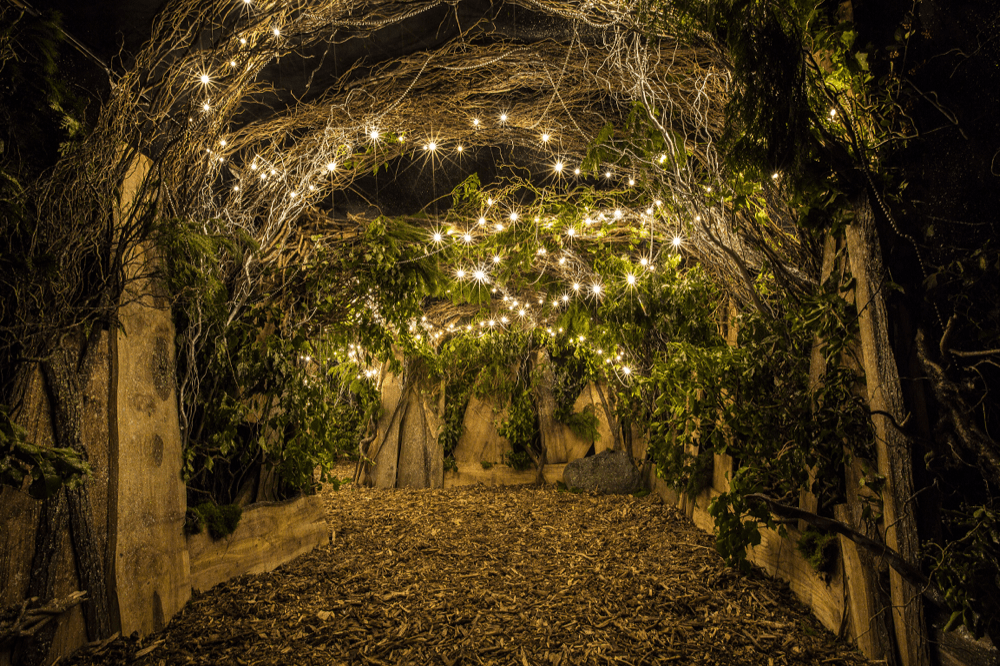 And actually, if you live in London, ^ is a real cinema you can visit. It's the Winter Night Garden at Backyard Cinema and it looks amazing. The screening list is basically just standard holiday movies and seems to be pretty family-oriented, but it's cool nonetheless. It would be even cooler if they would nab a 16mm print of "Innocence" and show it instead of "Love Actually."

Worst time to watch:
When you don't have much patience for slow pacing. If I made my mom watch this movie, she would probably say, "nothing ever happens." She said this exact thing when I made her watch "Magnolia," "Brick," and "Eternal Sunshine of the Spotless Mind" when I was in high school. If you're in this type of mood or watching with someone who is, abort.

When you're on mushrooms. Someone I know told me they watched this movie on mushrooms and it was a horrible experience. Duh. I don't recommend watching any movies on mushrooms. Go outside and watch some leaves blow in the air for 5 hours while someone supervises you, but don't go to a crowded cinema and try to sit there and enjoy and enjoy a movie because it just won't happen. You'll end up hating the movie, yourself, and everyone around you. You might even try to rush the stage and rip up the projector screen. Mushrooms are unpredictable, so tread lightly, friend.

Where to watch:
So here's the shitty thing: the full movie is actually available on YouTube, but the quality isn't great. I've searched high and low and haven't been able to find a good transfer of this movie... I actually don't think one is available. If that changes, I'll update this post.

Quick summary:
Based on a 1888 novella by Frank Wedekind, "Innocence" focuses on a group of girls at a mysterious boarding school that exists outside of time and place. Get ready for a bunch of Freudian symbology, because this film is chock-full.

Thoughts:
Most critics didn't like this film. They found it "pretentious" (Nick Schager at Slant), fetishistic (Manhola Dargis at The New York Times), and likened it to nothing more than "a very classy pop video" (Peter Bradshaw at The Guardian). I sort of understand where they're coming from on a few of those counts, although I largely disagree.

Remember my conflicted feelings about Catherine Breillat's "Fat Girl?" "Innocence" definitely fits into the category of "I loved it, but the director made some potentially questionable choices." And I say "potentially questionable" because I'm still unsure. In the case of "Fat Girl," there was sexualized nudity of minors (i.e., rape and sex scenes), which I felt definitely crossed a line. With "Innocence," we see shirtless little girls (probably somewhere around 6-years-old) swimming in their underwear. In the age of social media and oversharing, where mommy bloggers profit by pimping out their children, it's hard to find any of the images in Hadžihalilović's film shocking. (Whether or not they're boundary crossing is a whole other argument.)

Manhola Dargis raises an interesting point in her review:

In an interview with the British film critic Jonathan Romney, Ms. Hadzihalilovic rebuffed the suggestion that her film might be essential viewing for the raincoat brigade. "There is a certain fetishism in the film, but it's the fetishism of a girl who loves those clothes and hairdos," Ms. Hadzihalilovic said, "the fetishism is from the girls' point of view, and that's what worries people." I am not worried, though it is worth correcting the filmmaker on the critical issue of point of view: the images that some might find troubling -- the shots of the girls' legs, those peek-a-boo moments when the camera all but noses under their skirts -- are not motivated by any seen character. The point of view here is that of the filmmaker and, by extension, us.

I agree with Dargis that the point of view is (often) the filmmaker's/viewer's, but I also understand Hadžihalilović's comment about fetishism coming from the girls. When Iris (Zoé Auclair) watches and obsesses over Bianca (Bérangère Haubruge), the camera does the same. Many of the shots, especially in the first hour of the film, are dictated by Iris and meant to mimic her feelings (nervousness, trepidation, desire for acceptance) as different parts of her new world unfurl. The film's POV feels very insulary to me and I don't think it's quite fair to say that it's not motivated by any seen character. Sometimes it isn't, but sometimes it is.

But what makes Innocence especially unsettling is its iconography of girlhood. For many viewers, Hadzihalilovic's presentation - indeed, celebration - of her little girls will look like the stuff of paedophile fantasy. Yet the film's title is in no way ironic: this is quite literally a work about innocence. Indeed, it is the very absence of sexual connotation in the film - until its final stages, that is - that strikes us as unexpected, given that artists from Hans Bellmer through Balthus to Paula Rego have accustomed us to look for sinister, sometimes violent associations in the image of the schoolgirl. Hadzihalilovic, by contrast, uses school uniform in an entirely non-connotational light: these little girls, she is telling us, are just little girls - as they used to be in some barely imaginable and arguably mythical era before people thought of worrying about the sexualisation of such images.

If certain images from this film are interpreted in a sinister way, it's because the viewer and the filmmaker aren't innocent. As someone who was once a little girl and is now a woman, it's easy to look back at certain events and behavior from my past and recognize the sexual implications. At the time when they were happening, however, I didn't see them that way at all. Our knowledge is what makes this film so powerful. We understand that this schoolgirl illusion will shatter. These little girls will grow up and realize that they can no longer take off their clothes and swim in a lake without facing judgment or lasciviousness. They can't stay in a magical, forested place where men don't exist and women rule everything forever. The real world isn't like that and once they're older, they'll realize this very quickly.

As a viewer, I watched this film with bated breath, waiting for something unspeakably horrible to happen. Whenever Bianca and the other purple ribbons left at the end, I expected them to be sold into prostitution. At their last show, when the man in the audience throws Bianca a red rose, I thought, "well, that's it." As soon as men enter into the picture, everything changes. Nothing gold can stay. But then again, any astute viewer realized this from the very beginning. We know that an awakening is on the horizon, but we forget that often, it happens gradually. It's not as if a young girl wakes up on the day she gets her first period and thinks, "wow... sexuality makes sense to me now!" Knowledge builds over time and sexuality is constantly evolving, especially at a young age.

It's hard for me to denigrate this film for nudity and mildly suggestive imagery when it uses both to depict something so powerful, especially for female viewers. Innocence is fleeting and even when it appears to exist, it probably feels false or mythological in hindsight. Even at their most naive and sheltered, young girls often feel that creeping danger. They're not exactly aware of what it is, but they sense it all the same. Even Iris, who is dying to know where Bianca goes every night, suspects it might have something to do with boys. The more knowledge these girls accumulate, the more aware they become of the danger they're constantly facing.

"Innocence" is essentially Plato's Allegory of the Cave where the cave is the school, the men in the audience at the ballet are the shadows, and the boy in the fountain at the end is the outside world. We expect the boy in the fountain to be more menacing and obviously dangerous, but the world is often not like that. Sometimes the most dangerous situations look benign at first. For Bianca's sake, we hope for the best, but if we've learned anything, it's that one minute you might be splashing around innocently in a fountain and the next you might be touching a penis against your consent. 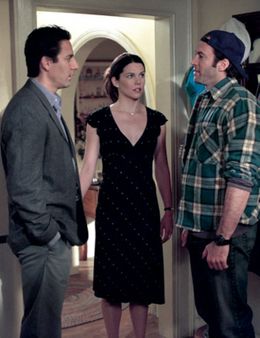 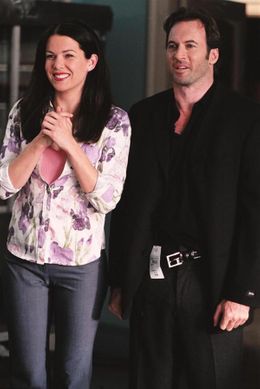