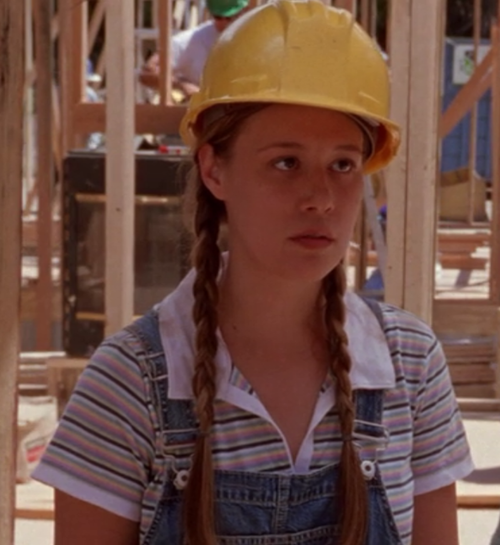 The next episode he directs is "Nick and Norah/Sid & Nancy," aka the one where Jess shows up and things in Stars Hollow start to get interesting.

With references ranging from Shusha, the disputed Azerbaijani city, to Bob Vila, the tv host for "This Old House," this episode was obviously penned by ASP.

Most batshit crazy outfit:
Rory's floral print shirt dress somehow makes her tits look both saggy and nonexistent at the same time. It's at least 2 sizes too big for her and I'm baffled that no one in the costume department pinned it in the back. She has a drab, gray cardigan over it, so the dress would have been easy to quickly alter on top. I'm not a fan of the two, stringy braids framing her face, either. The whole ensemble is way too "Sister Wives" for my taste.

I would also like to note that Dean's necklace (not the puks, but the other one) is now a permanent fixture: 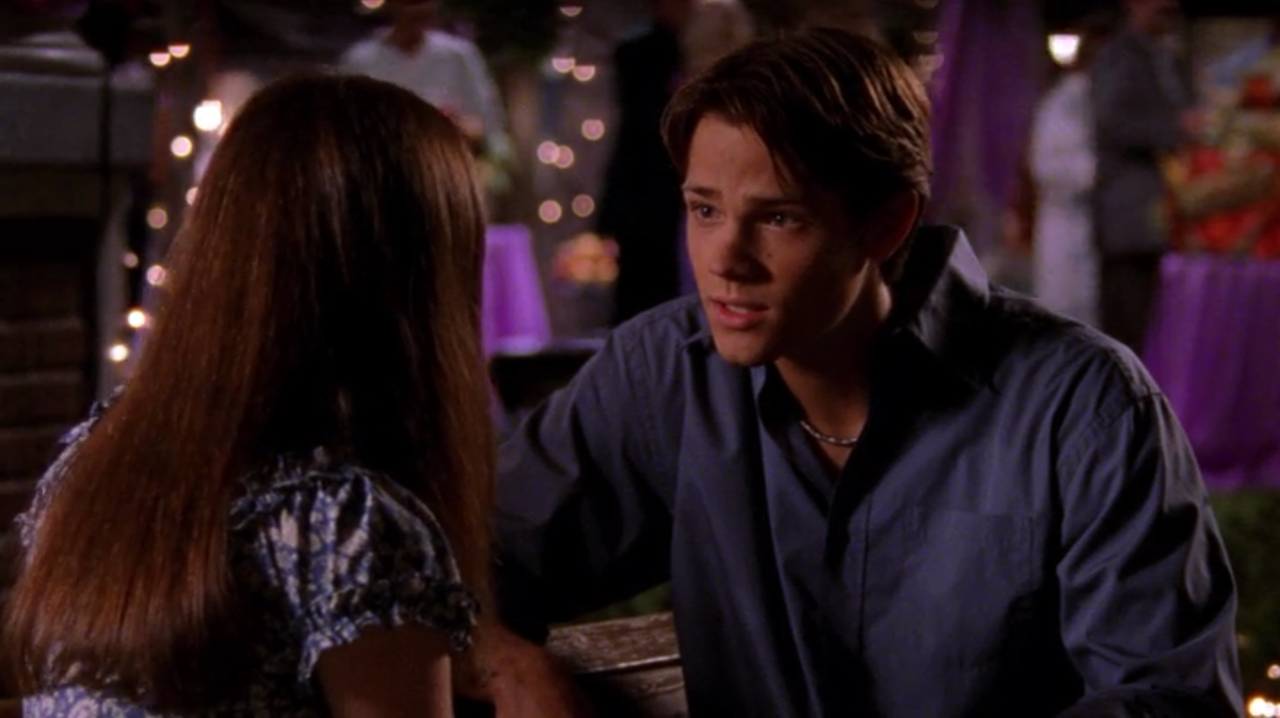 Most irritating Rory or Lorelai moment:
Rory and Lorelai both annoy me more than usual in this episode. First, Lorelai think it's a good/fun/cute idea to bedazzle a hammer and Rory goes along with it... because being useless at an important volunteer opportunity is hilarious 🙄. What a selfish cunt.

Later, Rory freaks out about her lack of volunteer opportunities and screams at Dean that she can't hang out because she needs to "find a retarded kid and teach him how to play softball." Rory is truly the most self-serving, narcissistic character on this show. She does nothing out of the goodness of her heart and prioritizes getting into Harvard over everything else. She would make a deal with the devil, Guy Woodhouse style, in exchange for a guaranteed acceptance letter.

(Even so, Dean is still a monumental dick for making her feel guilty about spending time beefing up her application instead of spending time with him.)

Number of times Rory or Lorelai treat their bff like shit:
None. I'm impressed with Lorelai for not making Sookie feel bad about inviting Emily and Richard to the wedding shower. Had it been me, I probably would have given Sookie a lecture about how I don't get along with my parents and they should never be automatically included in anything, no matter how important the life event.

Best literary or pop culture references:
Paris: I'm sorry if you thought we had some kind of deep Thelma and Louise thing going here, but we didn't.

"Thelma and Louise" is my favorite Ridley Scott movie. I could watch Susan Sarandon and Geena Davis vibe forever. 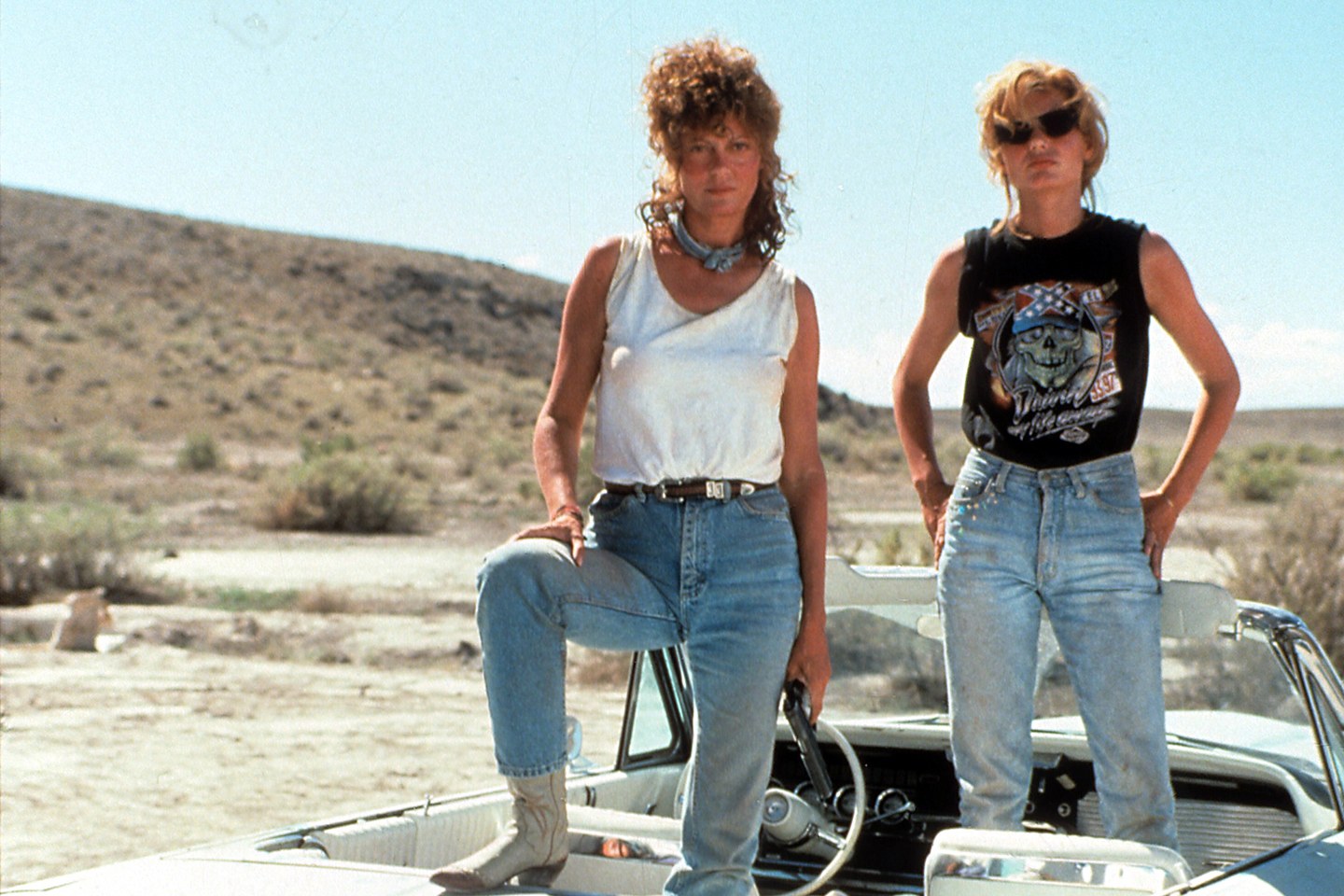 Stars Hollow weirdness:
The entire town shows up for Lorelai's wedding shower. There are even black people in attendance! It's truly shocking.

Sharpest insult or one-liner:
Luke's rant on weddings makes me smile:
Luke: Something that's supposed to start nice, two people making promises to each other. I'll love you forever, I wanna die when you die, my life meant nothing until you used my toothbrush. And then it starts.
Lorelai: Well, that's not exactly...
Luke: Who do you invite, who sits where, open bar, yes or no...
Lorelai: Luke?
Luke: Auntie Junie doesn't eat chicken, Uncle Momo's off his meds.
Lorelai: Junie and Momo?
Luke: Just an example.
Lorelai: Of a retired circus couple?
Luke: And then after all that planning, the reception will still be a disaster because no matter what you do or how carefully you plan, halfway through one of those nauseating Bette Midler ballads, someone's getting drunk, someone's sleeping with someone else's wife, and someone's chicken kiev is landing on the cake.

This ^ is exactly why I'm eloping in January instead of having a wedding. The thought of spending my "special day" accommodating assholes I don't care about makes me feel like vomiting.

Books mentioned/books Rory is reading:
Rory's too busy freaking out over nothing to sit down and read a book. She does mention that she's taking "obscure Russian poetry" next semester, though. Why that class exists is completely beyond me.

When Dean waits for Rory at the bus stop, he's reading a magazine...because of course he is. And it's probably not a cool magazine like "Film Comment" or "The New Yorker."

Best song of the episode:
"Love is Everywhere I Go" by Sam Phillips. The shot of Luke sitting on the bench with all the tiny brides/tap dancers is my favorite of the entire series. 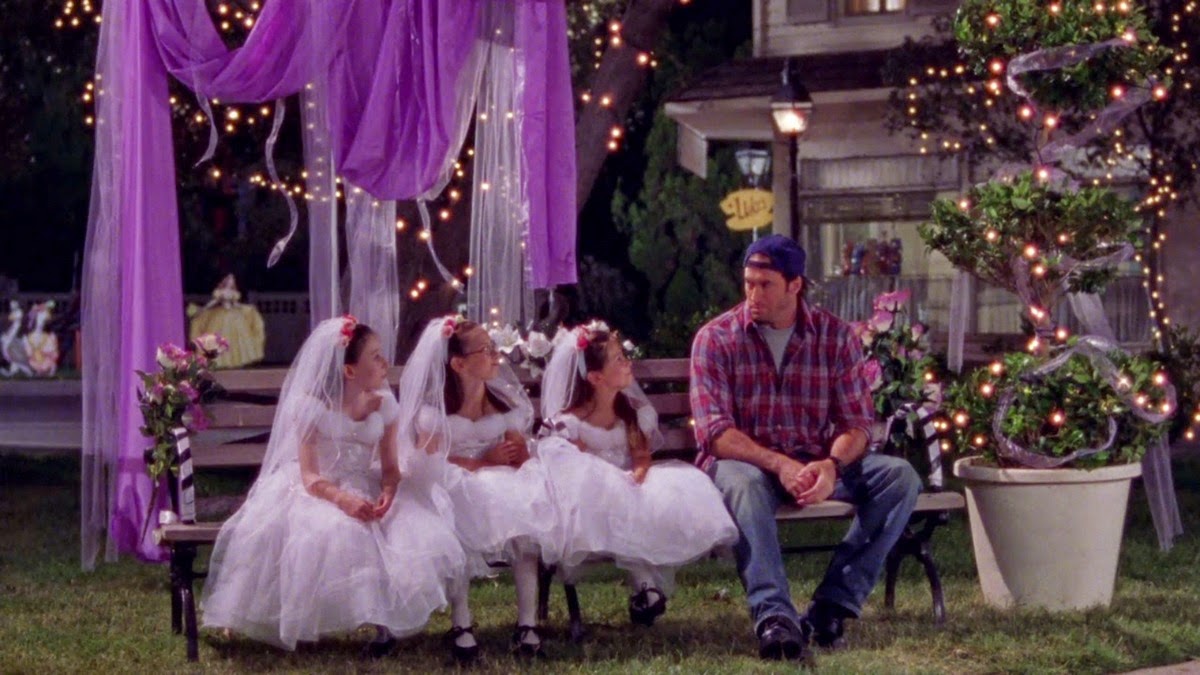 Thoughts:
In this episode, as in many episodes, Lorelai is hesitant to share news with her mother. If she tells Emily about Max, her reaction might not be great and since Lorelai already feels conflicted about her decision, it might be enough to sway her into backing out of the commitment. At least, I think that's partially why Lorelai has withheld information for this long. When she finally does tell Emily about the engagement, 3 months before the wedding, this is the exchange:

Lorelai: Well it's like this. Um... could you put down your fork for a second? Thank you. Okay, um, you know Max?
Emily: No, I don't.
Lorelai: Okay, I know you don't know him know him, but you know of him, right?
Emily: I've heard rumblings.
Lorelai: Okay, well, um, the... Max and I have been serious for quite awhile now, and he asked me to marry him, and I said yes. I'm getting married.
Emily: Well, I think that's very nice. I certainly hope we'll be in town for it, but if not I promise we'll send a nice gift. Now excuse me, I'm going to check on the roast.

Both fail to adequately express their hurt feelings. Had Emily decided to be honest instead of passive aggressively punishing Lorelai, she might have said something like this: "Actually, Lorelai, I've known about your engagement for awhile. Sookie called and invited me to the wedding shower and to be honest, I was upset that I heard the news from her instead of you." And in an alternate universe where Lorelai is more mature and level-headed, she might have stopped Emily from leaving the table and said the following: "Mom, I understand that you're upset and I'm sorry you heard about the news from Sookie. It's just that... I have a hard time sharing things with you because I'm always afraid your reaction is going to diminish my happiness."

Does anyone out there follow @everyoutfitonsatc on IG? They've started doing #WokeCharlotte posts where they reimagine Charlotte as "the fictitious voice of reason that "Sex and the City" desperately needed but never actually had." Here's an example: 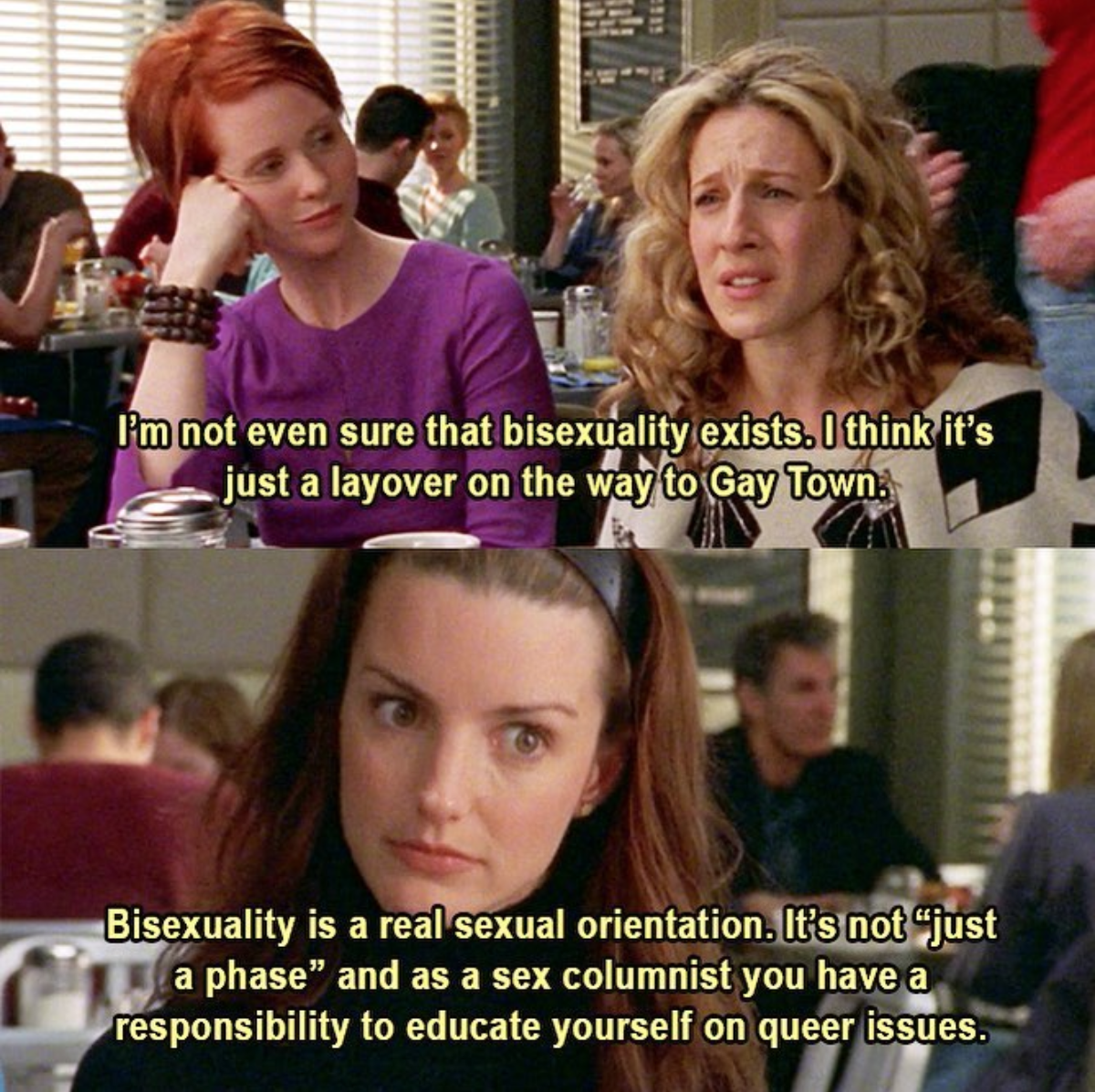 I'd like to start doing this with "Gilmore Girls," where I rewrite problematic conversations from the viewpoint of someone who has actually learned valuable communication strategies in therapy/is not an asshole. It wouldn't be as fun and sassy as #WokeCharlotte, but it would bring me joy.

Unfortunately, since the Gilmores like to bottle up their feelings and let them explode at the most inopportune times, Lorelai leaves Friday night dinner without vocalizing her disappointment. Later, when she's out with Max, her sadness/anger/disappointment come bubbling to the surface when he tells her how excited his parents are about the engagement. In a martini-fueled rage, Lorelai makes Max drive her to Emily and Richard's house without explaining to him where they're going or what they're doing.

As Max stands by idly, Lorelai screams at Emily and storms out of the house when confronted with her mother's side of the argument:

Lorelai: Do you know how it felt for me to tell you that I was getting married and to have you just brush it off like that? Do you know?
Emily: No, I don't, I don't know! Possibly very similar to finding out from a complete stranger that my only daughter was getting married and had told every other person in the world before she bothered to tell her own mother. Possibly it felt something like that. Now if you'll excuse me, it is late, and I am going to bed.

Yikes. I hate Max, but feel awful for him in this moment. Imagine meeting your future mother-in-law for the first time after an awkward, blowout fight that you're inextricably linked to and have no power to remedy. As if that isn't bad enough, you also have to attend a wedding shower where all the gifts are Hello Kitty home products intended solely for your fiancée. Sure, it's your wedding shower, too, but only in theory, definitely not in thought or execution. 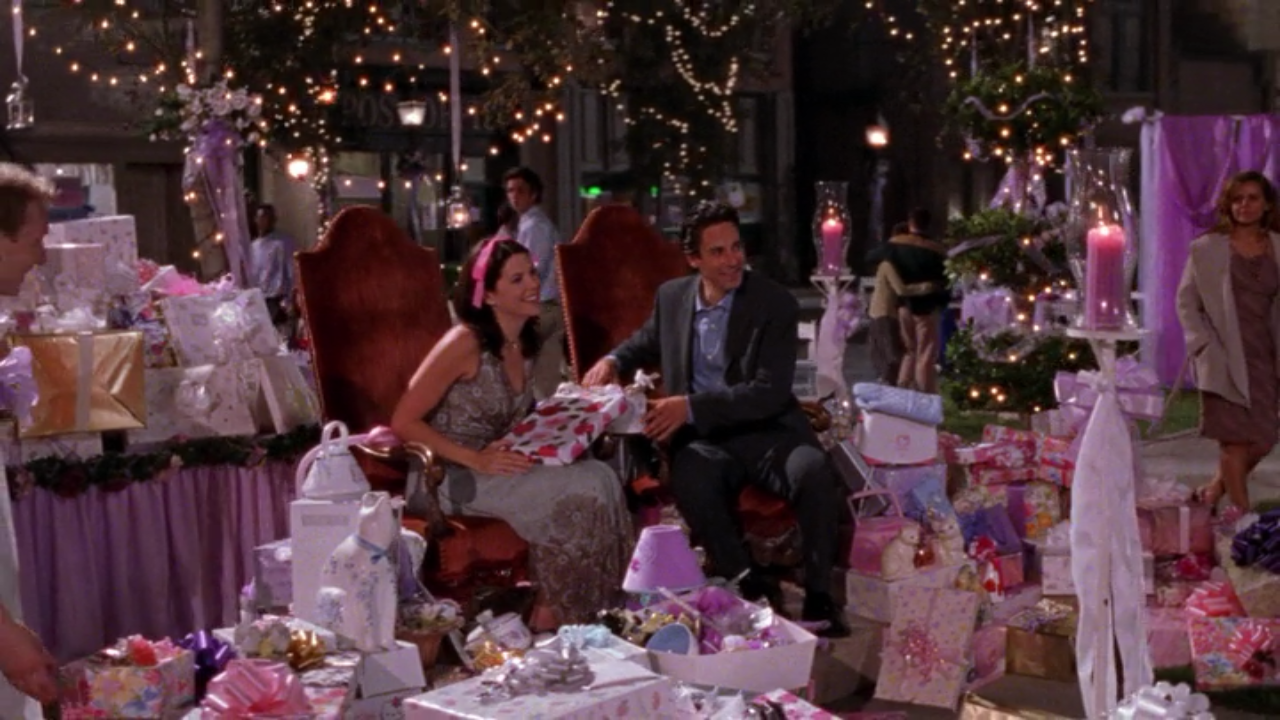 I also feel slightly bad for Dean in this episode. Yes, he sucks for getting mad when Rory prioritizes Harvard over him, but to his point, she doesn't do a great job of kindly communicating her needs to him. She's totally manic and blows him off like he means nothing to her. I would be irritated if someone canceled plans with me at the last minute and couldn't even be bothered to apologize or provide a sound explanation.

I can't believe I'm defending Max and Dean, but the Gilmore girls leave me with no choice. 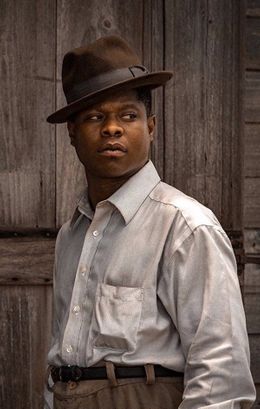 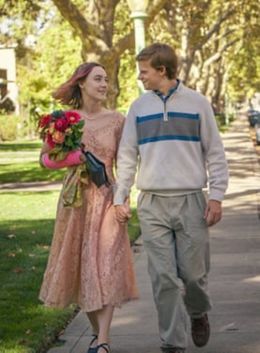