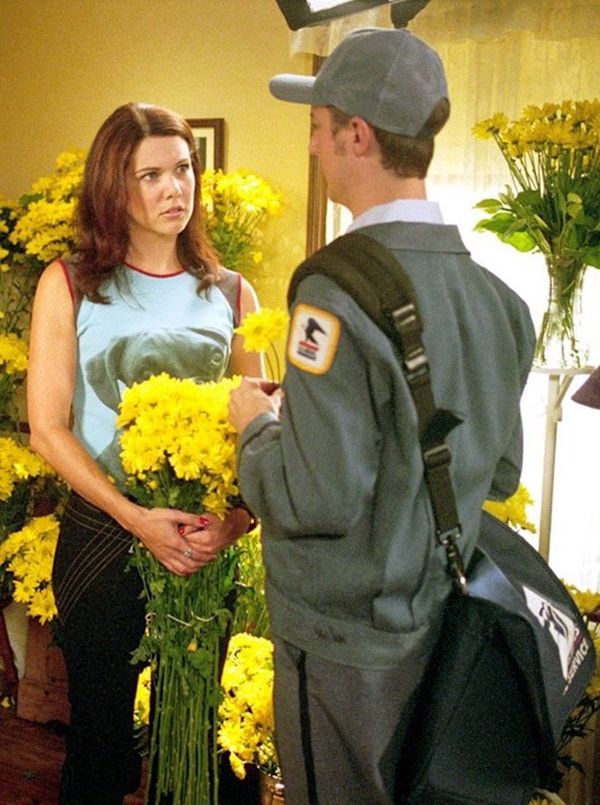 Directing and writing credits:
Written and directed by Amy Sherman-Palladino. From Seasons 2-6, ASP writes and directs every premiere episode. This one isn't my favorite (that award goes to Season 4's "Ballrooms and Biscotti"), but it sets a good tone for the rest of the season and the pop culture references are excellent. Case in point, Sookie pays homage to Babs:

There are so many Streisand references throughout the series that it's hard to keep count of them all. I think this is the third one, but I can't be 100% positive. In "Rory's Birthday Parties," Lorelai references her:

Rory: So, is this party Grandma's having going to be a big deal?
Lorelai: Not really. The government will close that day. Flags will fly at half-mast. Barbra Streisand will give her final concert...again.

In "Kiss and Tell," Dean admits that he's never seen "The Way We Were" and Lorelai and Rory are appropriately horrified:

Lorelai: Oh I've got one. At the end of "The Way We Were," you wanted Robert Redford to dump his wife and kid for Barbra Streisand.
Dean: I've never seen The Way We Were.
Lorelai: Oh!
Rory: Are you kidding?
Lorelai: What are you waiting for? Heartache, laughter --
Rory: Communism.
Lorelai: All in one neat package.

Amy episodes are always Broadway/musical heavy and it makes me happy.

Most batshit crazy outfit:
When I first saw Lorelai's boxer t-shirt (from the cover image) I thought it was ugly (obviously), but as soon as she turned around, omfg. Those jeans are maybe the most offensive article of clothing she's worn to date. Instead of pockets, they have criss-crossing seams that cover the entire ass and creep around to the front waistband. I don't even know how to describe them because as soon as they entered my field of vision, my brain shut down to protect me from having a stroke. From the front, this hideousness isn't noticeable because Lorelai's fugly nylon purse covers almost everything. Remember Mudd jeans? I'm pretty sure these are them.

Lorelai wears so many ridiculous things in this episode that it's honestly difficult for me not to rip apart every single one of them. Why does she insist on wearing button down shirts with nearly all of the buttons undone, exposing the ratty cami she has layered underneath?! She later wears a weird tie-dye long sleeve with some random symbol and old man glasses when she discusses engagement rings with Max. And when she shows up at her parents' house for Rory's special dinner, she wears a purple slip dress with appliqué flowers all over the tits. I don't want to slut-shame Lorelai, but c'mon... why would you wear this outfit to dinner at your parents' house?

Also, Dean wears not one, but TWO necklaces. Dean has a great body for clothes, but he wastes it completely by choosing frumpy, cheap-ass ensembles that are at least 2 sizes too big for him. And his haircut...

Most irritating Rory or Lorelai moment:
Lorelai's drawn out proposal acceptance is fucking ridiculous. If you have to think that much about marrying someone, you probably shouldn't marry them. What's the rush? The fact that Luke is able to rattle Lorelai by asking her some pretty basic (albeit rude) questions is telling.

Number of times Rory or Lorelai treat their bff like shit:
None! Good job, Gilmores.

Best literary or pop culture references:
Dean: So what's the movie for tonight?
Lorelai: Oh my god, a classic.
Rory: "The Joan and Melissa Rivers Story," starring...
Lorelai: Joan and Melissa Rivers. A mother and daughter torn apart by tragedy.
Rory: Suicide.
Lorelai: Not getting "The Tonight Show."
Rory: Mean boyfriends.
Lorelai: Identical noses.
Rory: You'll laugh, you'll cry.
Lorelai: Because you're laughing so hard.
Rory: It'll be an evening to remember.
Lorelai: And in the pivotal scene where a very distraught Joan gets locked out of High Holiday Services because she's late, I will be forced to rewind it and play it over and over about four thousand times.
Rory: You'll never be the same.

When David Hiltbrand from People reviewed this movie in 1994, he said,

It’s a small, embarrassingly personal boutique film. And it’s annoyingly told. Every few minutes Joan addresses the camera in a sort of stand-up soliloquy, like Seinfeld Sits Shiva. Amateurish acting seems to run in the family.

I agree, but I love Joan Rivers (RIP) and support all her endeavors, so fuck you, David Hiltbrand.

Stars Hollow weirdness:
The whole town is very invested in Luke's reaction to Lorelai's impending engagement. This isn't really weird, though. Luke and Lorelai are the weird ones! I don't understand how they're still so deeply in denial.

Sharpest insult or one-liner:
Rory: Oh! You should walk down the aisle to Frank Sinatra with a huge bouquet of something that smells really good.
Lorelai: Pot Roast.

Not really an insult, but damn... pot roast does smell delicious.

Books mentioned/books Rory is reading:
Richard gives Rory a first edition of "A Mencken Chrestomathy" by H.L. Mencken. I have never and probably will never read anything by Mencken, so I won't pretend to know anything about this book.

Best song of the episode:
"I'll Be Your Mirror" by The Velvet Underground. Lane listens to this song while she talks to Rory on the phone in her dope ass closet (with not one, but TWO lava lamps).

Thoughts:
If you categorized Richard Gilmore as a warm and fuzzy, kind, old, caring grandfather before this episode, I hope you've recognized your wrongness. He is an elitist dick who judges people solely on pedigree and paper accomplishments. He thinks he's some kind of genius because he went to Yale in the 1960s, when in reality, all this means is that his family had money. (Your parents are important/millionaires and donate a shit ton of money to the school? I'm not impressed that you went there.)

Don't get me wrong: Richard grows so much as a character throughout the series and definitely has likable moments, but he can be an asshole. I can't believe I'm going to defend Dean here, but even he doesn't deserve to be treated so poorly by someone who barely knows him. I do think Rory and Dean are a bad match, but not because he gets mediocre grades and doesn't care about going to college. They suck as a couple because they have nothing in common and Dean is obviously insecure throughout the entire relationship.

In Season 1, he freaks out when Rory doesn't say "I love you" immediately and jumps to conclusions whenever he sees her with Tristan. In Season 2, he has meltdowns about what will happen to their relationship when she goes to college and of course, (we're almost there, people!) Jess. At the beginning of Season 1, Dean sort of had a personality. He got Rory's "Rosemary's Baby" reference, remember? But then the writers forgot to continue developing it. Or they knew Jess was coming and had to make Dean less desirable in order to win fans for #TeamJess. Either way, I agree with Richard that they aren't a good match, but I disagree with both his reasoning and his delivery of the message.

Telling a teenage girl you don't like her boyfriend will almost 100% of the time make her like him more. It's basic science. If Richard really wanted to enact change and convince Rory of Dean's shortcomings, he could have done it easily. If he had mentioned his concerns in a calmn, private way, he would have likely made an impact. As the years progress, Richard and Emily prove to have quite a bit of sway over Rory's big life decisions. She goes to Yale instead of Harvard, breaks up with Dean (for the second time) at their male Yale party, moves into the poolhouse, and starts working at the DAR. If he had approached Rory in a calmer way, Richard could have saved us three more seasons of Dean.

And if Luke had found his self-help tape earlier, we could have avoided 3 more seasons of lackluster, unmemorable (sans Digger) dudes. But Luke is grumpy diner man to the core and has issues expressing his feelings. Here's the conversation they have when Lorelai tells him about the proposal:

Luke: You know, I think it's good you're doing this.
Lorelai: You do? Good, me too. I mean, not that I'm definitely doing it, but if I do, then it'll be good.
Luke: Where you gonna live?
Lorelai: What?
Luke: Here? Hartford?
Lorelai: Here. I don't know, we haven't talked about it actually.
Luke: Hartford's probably good, closer to Rory's school.
Lorelai: Oh, yeah, I guess.
Luke: Of course, it is a little far from the inn.
Lorelai: Uh, yeah.
Luke: But who knows how long you'll work after you're married.
Lorelai: Excuse me?
Luke: Oh, but you probably already talked about that, right?
Lorelai: Uh, no, but I do think he and my father have come to an agreement on how many goats I'm worth.
Luke: Hey, I'm just talking here. It's great, really. You gonna have more kids?
Lorelai: Hi, personal.
Luke: I mean, he wants kids right?
Lorelai: In the world? Yes, he wants kids.
Luke: You haven't talked about that either.
Lorelai: Okay, you know, what we have and have not discussed is none of your business.
Luke: Joint checking accounts?
Lorelai: Luke!
Luke: You do know his last name don't you?
Lorelai: I want my popsicle back.
Luke: Fine, it's your business.

These questions are sexist, offensive, and none of his business, but I think Luke knows this and purposely asks them to piss off Lorelai and make her doubt her relationship. As far as we know, she and Max haven't discussed kids or living arrangements, which is deeply problematic considering there's a marriage proposal on the table.

Luke's tactic actually works fairly well and had Max not jumped to conclusions when Lorelai called him for clarification, I don't think she would have said yes. It's important to note that we don't actually hear her say yes. We hear Max prompt her and we see her subsequent celebration with Rory, but the conversation is cut off before there's any finality:

We do, however, see her face. And it doesn't look happy. It looks confused and stressed, not "omfg, I'm getting married!" Her face tells us everything we need to know.