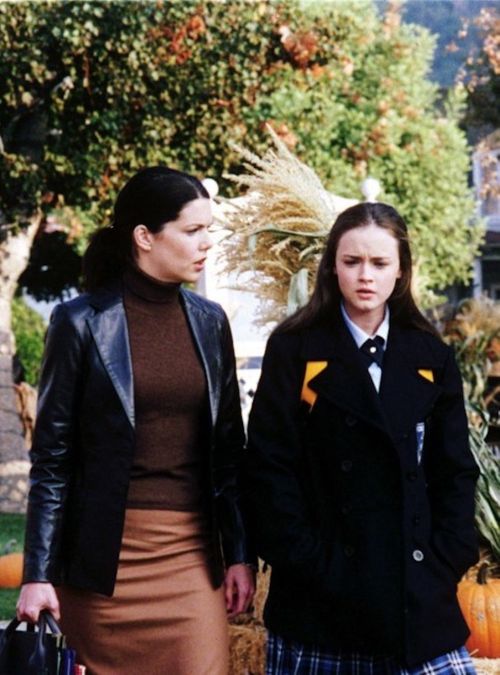 Directing and writing credits:
This episode was written by the one and only Jenji Kohan. You may have heard of a few little shows she’s created since then, “Weeds” and “Orange is the New Black.” She worked on "GG" for one season, but this is her only episode credit.

It’s reported that Kohan called working on the show “complicated,” because ASP never wanted a writer’s room, but was forced into it by the network. As a result, ASP would solicit ideas from the team, but often write episodes by herself.

Note: I couldn’t verify Kohan saying this from any additional sources, but it fits with things ASP has said about the process.

The episode was directed by Rodman Flender, his only "GG" credit.
​
Most batshit crazy outfit:
Surprise, surprise, the winner is: Lorelai! This time, she takes the crown in a crochet bandana, tie-dye shirt with rhinestones and a graphic print, jeans in a weird yellow-hued dirty-wash, and pink loafers.

Though I frequently pick on Lorelai’s fashion and style choices, I do want to give her props for missing the pencil thin eyebrow trend of the early 2000s. That wasn’t a good look for any of us.
​
Most irritating Rory or Lorelai moment:
For me, it was when Lorelai said: “Listen, the talking part, you just get used to. The hair twirl I can teach you. And the leaving him amazed part -- with your brain and killer blue eyes I'm not worried. You'll do fine. Just give yourself a little time to get there.”

Something about the way Lauren Graham delivers the line feels very fake and un-Lorelai. It’s like nails on a chalkboard and pulls me out of the scene every time I watch it.

Boyfriend, who is very into this "GG" watch project, had a different take.

While watching it, he declared Lorelai’s post-Dean-stalking rambling to Luke about how Rory should tell her everything her worst rant. After the episode, he revised his position to add, “The scene where she empties the fridge was annoying. I always find Lorelai irritating.”
​
Number of times Rory or Lorelai treat their bff like shit:
I say zero. There’s an argument to be made that Lorelai getting rid of Sookie is shitty, but I think Sookie being there in the first place is terribly weird, and my only complaint is that Lorelai didn’t actually get her out of there before she saw Dean.
​
Best literary or pop culture references:
“You’re like a crazy Elsa Klench.” – Rory to Lorelai, as she helps her pick out a date night outfit.

To her credit, I like the ensemble Lorelai puts together, but given her overall aesthetic, it’s delightfully absurd to compare her to an iconic fashion journalist.

(Author’s note: I have currently recruited Lindsay to What-Not-to-Wear me IRL, and really should not be trusted to say any of this.)
​
Stars Hollow weirdness:
While not necessarily weirdness, I absolutely adore the Luke vs. Taylor dynamic, which I feel really takes hold here.

Taylor: Every other store in town has fall decorations.
Luke: Hoorah for the mob mentality.
Taylor: We're talking a few streamers and a paper turkey. How's it gonna hurt to have a paper turkey?
Luke: No turkey, no squash, no pumpkins. Nothing colored orange.
Taylor: OK, you don't like orange. That's fine. Autumn has many varied hues to toy with.

I try to work “Autumn has many varied hues to toy with,” into my repertoire at least once each fall.

Sharpest insult or one-liner:
“Sorry, I guess my pod’s defective.” - Luke to Taylor on not decorating for Thanksgiving

I habitually appreciate Luke’s antiestablishment nature. While I love the weirdness that is Stars Hollow, their conformist attitudes definitely get a little creepy.
​
Books mentioned/books Rory is reading:
This is another bookless episode, making two in a row. I call shenanigans.
​
Best song of the episode:
While technically a musically lacking episode, there is some solid musical discussion. After her reconnaissance mission, Lane reports back that Dean likes Nick Drake, Liz Phair and the Sugarplastic.

This lead to the following conversation between me and boyfriend.

Boyfriend: Nick Drake reference!
Me: I see that you picked Nick Drake over Liz Phair.
Boyfriend: Yeah, cause Nick Drake’s good. I recorded a version of one of his songs.
Me: Which one?
Boyfriend: Pink Moon. Do you know it?
Me: Nope.
Boyfriend: You probably do. They used it in a Volkswagen commercial.

We laughed when it came up later when Dean was in Rory’s room.

Dean: Wow. Very clean. How much does it suck that they use 'Pink Moon' in a Volkswagen commercial?
Rory: Oh, I know.

It is important for me to note that boyfriend’s recording of “Pink Moon” is on the internet, but I have been forbidden to share it.
​
Thoughts:
Though I grow to loathe the broody and needy blahface Dean later becomes, he still makes me swoon in these episodes. Dean and Rory’s first kiss in the grocery store is everything I think a first kiss should be: anticipated, adorable, and a little bit awkward.

Lorelai is at her absolute worst this episode. She loses her damn mind that Rory didn’t tell her, despite the fact that she has not previously handled the kissing subject well and that two episodes ago, Lorelai had kept her date with Max a secret.

As a reminder, this is an abridged version of their conversation in that episode:

Lorelai: Are you mad?
Rory: Yes.
Lorelai: Right. Because I’m dating him?
Rory: Because you lied to me.
Lorelai: I kept information from you.
Rory: Information that I should’ve had…I just can’t believe that you didn’t tell me about this. Why wouldn’t you tell me?
Lorelai: Because I thought you were gonna take it bad, thank God I was wrong. Ok, ok, listen, I’m sorry. I won’t date him, I promise.

So hey, Lorelai? That whole, “We tell each other everything” thing you keep preaching? It’s not only obsessive and disturbing, it’s a lie.

When she finally decides to act like an adult and ask Rory about it instead of poking around with bizarre “General Hospital” references, she does a terrible job pretending to be fine.

Cut to Lorelai’s decision that she should invite Dean to movie night. I’d love to say that I cannot imagine a world in which a mother thinks it's okay to invite her daughter’s crush over to their house for a joint hang session, but, having met my own mother, I can. I respect that it comes from a place of good intention while also recognizizng that it represents some major boundary issues.

Lorelai has one accurate reaction to Rory’s horror: “I just found out that I’m my mother and have to go into intensive therapy right now.”

Intensive therapy would probably let Lorelai know why the sentence “I’m not trying to be a chaperone, I’m trying to be a girlfriend,” is NOT A VIABLE PARENTING STRATEGY. Especially when she won’t even stick to it! Girlfriends do not give dates—especially first dates—possessive and threatening 'we-are-watching-you' talks.

Lorelai’s constant vacillation between gal pal and mother is exhausting for both the characters on the show and the entire generation of women fucked up by weekly viewings with their own moms. That was some seriously unhealthy modeling packaged as an ultra progressive take on parenting.

Oh, and Dean? Well played with your own post-kiss “Thank you.” Let’s all go to our fridge, grab a beverage, and pour one out for cool, sexy, first-half of season one, Dean. We hardly knew ye. 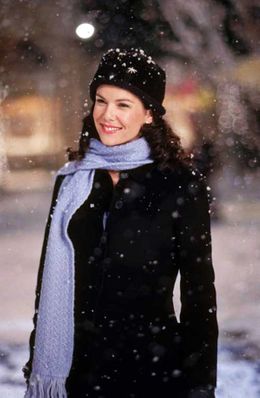 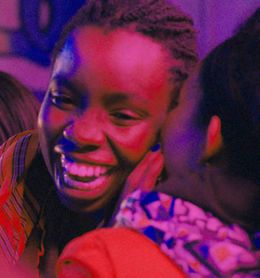