'The Marvelous Mrs. Maisel' Season 4, Episode 8: How Do You Get to Carnegie Hall?

At the start of this season, I fully expected to sit through eight hours of Midge's narcissistic bullshit, seething with rage as everyone continued to praise her comedic prowess while ignoring her more unattractive qualities. By this finale, I was pleasantly surprised to find that not only was there legitimate character growth, but a real acknowledgement of flaws from the Palladinos. One of my biggest criticisms of "Gilmore Girls" is the way the world of the show often fails to recognize how problematic its heroines are. Rory and Lorelai could go on a Stars Hollow murder spree and everyone would still be like, "We just love that beautiful single mother and her Ivy League daughter. They shit rainbows and fart sunshine." Like OK, townspeople ... maybe stop putting these emotionally stunted bitches on a pedestal. But I digress!

The episode's biggest events are Moishe's heart attack and the consummation of Midge's relationship with Lenny. At the hospital, everyone freaks out about having potentially killed Moishe. Joel is convinced his "my Chinese girlfriend is pregnant" news did it; Midge believes it's her fault for being so behind on the apartment payments; Archie blames it on himself for losing The Button Club's money; Imogene had nothing to do with it and takes on the role of patting people's arms. There are moments of levity, like when Abe is convinced he heard a death rattle that is actually just his keys, but overall, it's a relatively somber affair.

With Moishe unconscious and his fate uncertain, Shirley spends the night at the Weissman apartment. While Rose and Zelda grab some overnight supplies in Queens, Shirley and Abe have a frank discussion about death. Shirley is typically a character used for comedic relief, so it's unsettling to hear her talk seriously about burial plots and Moishe's desire to have his obituary in The New York Times. Of course, she also goes on a funny tangent about how "Casablanca" is an overrated movie, what with its lack of dwarves and tap-dancing. Despite Abe's insistence that he's going to die before Rose, Shirley reassures him that if things don't go as planned, she'll be around to help.

This conversation (and the later one between Rose and Abe) reminds me of the "GG" episode in S1 when Emily demands to "go first" after Richard collapses at Christmas dinner. Weirdly, it's just as touching to see it take place between ex-in-laws who vow to be there for each other if shit hits the fan with their spouses. Up until this point, it always seemed like the Maisels and the Weissmans merely tolerated each other but if you really think about it, they've actually managed to develop relationships that surpass their children. Abe may not have previously realized this, but Moishe's health scare lends a new perspective.

In a valiant attempt to carry out Moishe's wishes, Abe tries to cajole The New York Times into writing an obituary for him. Unfortunately, they aren't impressed by Moishe's testicle breathability garment innovations, so Abe decides to write it himself. As the snow falls softly outside the Village Voice office, Abe and Imogene slumber peacefully at their respective typewriters. They've stayed awake most of the night, cranking out the obituary at lightning speed. When Isobel, the secretary Imogene threatens to dismember, wakes up Abe and tells him that he needs to get to the hospital immediately, he assumes the worst has happened.

Rushing through the hospital room door, shaken and clutching the half-finished obituary, Abe is shocked to find Moishe awake and surrounded by loved ones, all of whom demand to know what he's holding. After much prompting, Abe ends up summarizing the obituary, which brings both him and Moishe (and me) to tears. There is nothing better than watching two men unabashedly express their platonic love for one another as everyone else uses the excuse of ice cream to afford them a private moment. I wish it wasn't so rare to see a scene like this on TV. Tony Shalhoub is absolutely deserving of his Emmy nomination, but Kevin Pollak should have gotten one as well. "Ted Lasso" doesn't need three supporting actor in a comedy series noms, dammit.

Once Moishe is discharged from the hospital and back in Queens, he and Joel clear the air around Mei. In a predictable turn of events, Moishe doesn't give a shit that Mei is Chinese but demands she convert to Judaism before Shirley is informed of their situation. Based on how Mei reacts when Midge tries to plan for the future with her in the hospital, I would be shocked if she kept the baby and/or decided to marry Joel. I doubt the Palladinos are ready to dig into the dark world of illegal abortion in the 1960s, but ... Mei is going to be a doctor and has more knowledge/resources than most other women at this time. This kind of storyline feels especially relevant on the heels of Dobbs v. Jackson and I hope it was at least considered for the final season.

In another great Shalhoub scene, Abe passionately kisses Rose at the Maisel house, gifts her a new stationery set, and reminds her that he's dying first. The fact that Abe, who often fails to take Rose's passions seriously, has added "Matchmaker" to the stationery moniker, feels like his way of lending unspoken support to her budding career. In a delightful montage, we see all of the other matchmakers receiving handwritten letters, telling them to fuck off a la Emily Post. I hope Benedetta puts a hit out on Rose in S5. Do we think she knows Frank and Nicky?

Which, speaking of, it was high time for someone to finally state the obvious: Frank and Nicky are not nice guys who help Susie around the office because they value her friendship. They have a vested interest in how her business performs and won't take kindly to repeated decisions that negatively impact revenue. When Lenny recommends Midge for a sweet Tony Bennett opening act gig at the Copa, she refuses to even consider it. Susie has given up on talking sense into her, but "Martini and Rossi" try their damndest to persuade her before excusing themselves to torture and/or kill the phone company guy. I'm curious to see if the threat of these two mobsters ever comes to fruition or is merely used to create sustained suspense.

As for Midge and Lenny, I'm already bracing myself for the crushing blow of their doomed romance. In light of Moishe's condition, Midge tries to blow off her gig at The Wolford, but gets sucked back in when Boise calls and begs for her return. Good "tampon sticks" and sparkling toilet bowls mean nothing to the lady patrons without Midge. Of all the sets we've seen her perform, this one at the Wolford might be my favorite. It's a little "white privileged woman has a basic realization about feminism," but it combines wry observations with a tenderness we don't often see from Midge on stage. When the act starts to become too sentimental, she pulls it back with her signature crassness. Even though it's very impromptu, Midge reads the crowd like a pro, demonstrating how much she's honed her performance skills over the years.

Backstage, Lenny lies in wait, armed with a sincere apology for his grouchy hangover antics and bearing good news regarding the Tony Bennett gig. Before Midge can hit him with her "no opening acts" bullshit, the club gets raided by the cops and everyone is forced to either skedaddle out into the snowstorm or hide under a pile of feather boas. Midge and Lenny escape the fuzz and end up at his swanky Carnegie Hall hotel room. I want to know how many people have masturbated to this masterclass in verbal foreplay. How the fuck is Luke Kirby so sexy as Lenny Bruce yet so disgustingly basic as a fedora-wearing dad in that horrible "Gossip Girl" reboot? Make it make sense.

My favorite Lenny line is when he tells Midge she's more important than God, proving that not only did he pay attention to her set, but committed it to memory. To me, there is nothing more attractive than being desired on an intellectual level. It's like the "Brooklyn Nine-Nine" episode where Holt explains the erotically charged energy of the Barrel Museum. For the right kind of person, conversational sparring can be even more titillating than sex.

Amy Sherman Palladino, the writer/director of this episode, lets the coziness linger until Midge gets up in the middle of the night to use the bathroom. When she finds Lenny's drugs by the sink, she looks perplexed. Midge isn't exactly hip to the world of illegal substances, but she's also not completely naive. Lenny catches her snooping, sweeps the seriousness under the rug, and all is temporarily forgotten. For the viewer, this scene cements the historicity of the character. In real life, we know that Bruce died at age forty of a drug overdose. For a while, it was unclear whether "Maisel" was going to follow that narrative or deviate into fictional territory. By showing undeniable evidence of his addiction, ASP lets the viewer know that this is a doomed love story, not one with a happy ending.

Lenny isn't going to miraculously get his shit together and embrace domesticity because of his fondness for Midge. That's not who he is and wishing for him to change will only lead to additional heartbreak. On some level, I think Midge is aware of this. Their relationship isn't one of comfort and stability, but of attraction, mutual respect, and career aspirations. What Lenny lacks in traditional boyfriend qualities, he makes up for in his ability to yank Midge's head out of the sand, hopefully preventing her from destroying her own shot at Carnegie Hall. I normally hate it when a man is the impetus for a woman to change her life, but it works for me in this episode.

From the beginning, Lenny has always been a Midge ally, giving her opportunities and assistance when no one else would. His advice at the end of the episode isn't like the unearned Jess Mariano speech in "GG" where he tells Yale-dropout Rory that he knows her better than anyone. Lenny doesn't claim to know Midge better than she knows herself, but he does have insider knowledge when it comes to the business of comedy. Lenny wants to help her, to use his connections to benefit her as much as possible, but it's impossible for him to do that when she can't see the forest for the trees. Midge can't cocoon herself in the womb of The Wolford forever, nor can she blame censorship for her lack of success. Midge is the only one preventing herself from achieving greatness. If her ultimate goal is to entertain, to make the masses laugh, then she needs to think strategically.

Susie tried to tell her this, but Midge refused to listen. Coming from Lenny, a comic who is currently where she dreams of being, it's much harder to ignore. S5 will either bring us a new and improved Midge or the same tired person who can't handle anything other than abject praise. Stay tuned. 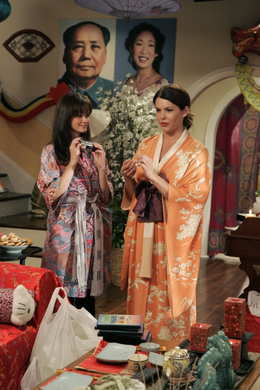 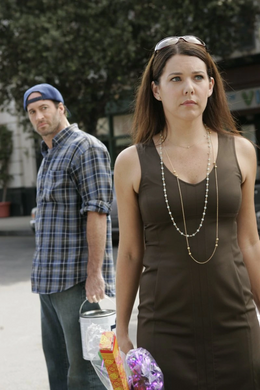