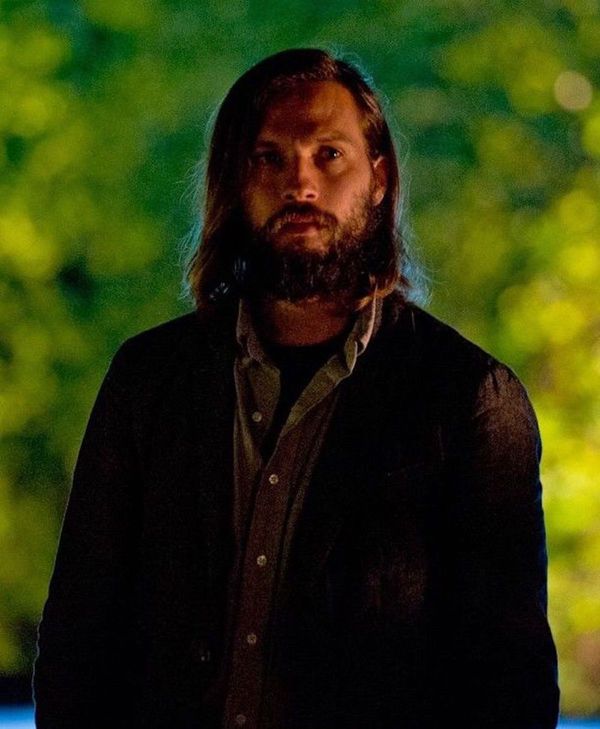 Vibe:
Chilling and uncomfortable. At the beginning of the film, Will (Logan Marshall-Green) and his girlfriend, Kira (Emayatzy Corinealdi), hit a coyote on the way to a dinner party at his ex-wife's house. With this first ominous note, the film unfolds and leaves viewers on edge up until the final twist. For the first 75 minutes, "The Invitation" feels like a thriller and actually reminded me a lot of James Ward Byrkit’s "Coherence" from 2014 (another film I didn't care for at all and can't believe people compare to "Primer"). The final 20 minutes are relatively straightforward jumpy slasher, followed by a climax that is designed to make you say, "omg wtf" but just made me go, "meh."

Obviously, I didn't care too much for this movie, but other critics largely disagree with me. Justin Chang (Variety) and David Sims (The Atlantic) both give it good reviews, so take my negativity with a grain of salt. The NYT's Manhola Dargis has thoughts more in line with my own:

“The Invitation” flirts with ideas that it doesn’t develop, including the nature of trauma and the allure of salvation, particularly when it comes to the kind of spiritual hokum that can send reasonable people around the bend and not just in Southern California. If the movie works as well as it does, it’s because Ms. Kusama can coax scares from shadows, silences and ricocheting looks.

The last sentence is generous, though, and I disagree with Dargis on Karyn Kusama's directorial approach here. More on that later, though.

Best time to watch:
When you're in the mood for something spooky/chilling and don't care too much about top-notch quality. This film has a great cast, but I felt like most of the actors weren't pulling their weight. The script, written by Phil Hay and Matt Manfredi, is clunky and I wish it had either been pared down completely or gone through a few more rounds of revisions. I don't mind low-budget films when style meets the content, but in this case, I couldn't stop thinking about how flat the whole thing looked. Some of the reaction shots could have been really powerful, but as my girl Manhola Dargis points out, "the movie has a digital look that makes faces putty colored and robs them of detail." Yep. Bummer. But if you're not going to obsess over these things and let them ruin the movie for you, you might enjoy it.

I would also recommend this one if you're watching with a large group of people, like at a Halloween party, and need to try to please everyone. Maybe everyone is sick of genre classics like "The Thing" and "Carrie" and has already seen "It Follows" and "The Babadook," so you offer up this film as a suggestion so as to avoid watching something even shittier like "Hush" or one of the "Saw" movies. Actually, no... fuck it. I'm done trying to be nice. I did not like this movie and I wouldn't recommend it to anyone. I would rather watch "Halloweentown" or "Hocus Pocus" for the 1,000th time than sit through "The Invitation" again.

Have additional suggestions? Leave them in the comments.

Where to watch:
"The Invitation" is currently streaming on Netflix.

Quick summary:
After a traumatic event broke up his marriage 2 years ago, Will (Logan Marshall-Green) has been out of touch with his ex-wife, Eden (Tammy Blanchard). That is, until Eden invites him to a dinner party at the house they used to share together with all of their old friend and her new husband, David (Michael Huisman). As soon as Will walks through the door, he's convinced something isn't quite right. Is he paranoid or is something sinister afoot?

Thoughts:
I remember being intrigued by the trailer when this movie came out a few years ago, but I only got around to watching last week. I went into it having read zero reviews and with little familiarity of Karyn Kusama. I saw "Her Only Living Son," the short she directed for "XX" earlier this year, but none of her other films. "XX" was a very hyped, supremely disappointing horror anthology, and Kusama's film was the only one that didn't feel sloppy and underdeveloped. I had heard good things about "Girlfight" and "Jennifer's Body," so I was stoked to watch "The Invitation" and finally dig into Kusama's body of work. After actually watching "The Invitation" my excitement has waned.

I'm usually pretty good at suspending my disbelief and overlooking minor issues in order to enjoy the experience (especially when watching horror), but I found myself unable to do it from the moment Will and Kira entered Eden and David's house. As they walk through the hallway, the camera tracks from behind, cuts to Will's face in profile, then cuts to a shot through a doorframe of a little boy playing with dinosaurs. As the camera cuts back to Will's face, we hear the distant sound of his voice, coupled with eerie string music, saying, "Come on, Ty. Dinner's ready." Being back in this house is clearly triggering Will to think of the past. At this point, it's not clear what happened to Ty, but we can see sadness creeping into Will's eyes as he continues to walk past the door.

Later, about 15 minutes into the film, there's a scene in the kitchen where Will has another flashback, this time of Eden struggling against him with a knife, desperately trying to slash her own wrists. Back in the present day, the real Eden saunters up to Will and starts spouting off New Age garbage about how "pain is optional" and blah blah blah. The movie wants to create tension by calling Will's mental state into question, but it quickly tells any discerning viewer that Eden is the one who's fucked up. We have no reason to distrust Will and every reason to distrust Eden. If the movie wanted to keep us guessing, this scene in the kitchen should have been less obvious.

At a little more than 1/8th of the way through the film, here's what we know about Eden:

Although Will is certainly going through some shit, he doesn't seem nearly as damaged as Eden. His pain is apparent, but hers has clearly been shoved deep down and masked with pseudo-spiritual platitudes and compartmentalization. The film wants us to believe that Will is potentially unstable and paranoid, but fails to put together a compelling case. For example, this shittily written exchange happens after Eden slaps Ben and walks out of the kitchen:

Will: Has she been acting like this the whole time?
Ben: You mean, with all of the Topanga Canyon new-agey bullshit? Yup. David too.
Will: Man... she's like a different person.
Ben: Look, I'm all for whatever you gotta do to get by, especially you two, what you went through. But... but at least you didn't lose your mind.
Will: I didn't?
Ben: Not like that.

Or did he?! Dun dun dun. But seriously, some suggestive dialogue and Will's desire to occasionally escape the fucking weird energy in the house is supposed to be enough to convince us that he's paranoid? It doesn't work for me. I need more.

It also doesn't help that Eden and David show their hand very quickly by making the entire group watch a creepy cult indoctrination video, where a healthy-looking woman dies on screen, early in the evening. Everyone, especially Will, is rightfully upset and confused about why David and Eden would think this is an appropriate thing to show at a dinner party. Throughout the night, the dinner party guests become increasingly uncomfortable, which also helps bolster Will's credibility. If he's the paranoid one, why are those around him echoing his sentiments?

I love the concept of this movie and general structure (thriller, slasher, horror), but none of the elements worked well and I believe it suffered most because of the terrible script and weird casting. It's hard for me to assess how much of its failure is due to Kusama's direction, but her involvement in this project and general critical praise make me think she's probably just not my cup of tea. 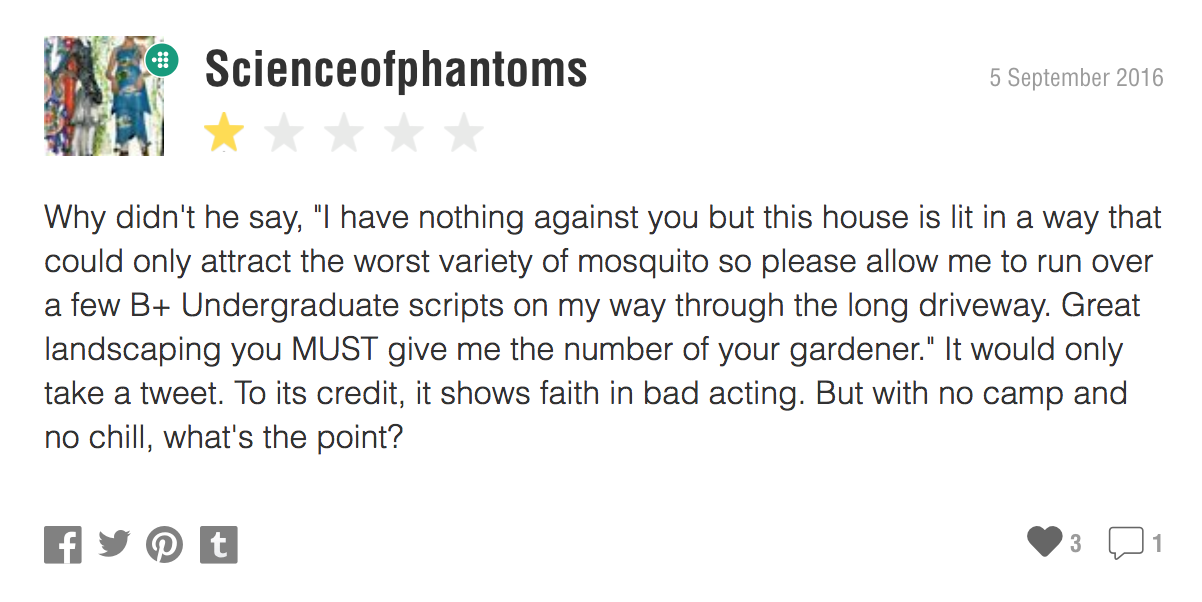 Agreed 100%. A++. Toward the end of the movie, my boyfriend turned to me and said, "Kira is going to be the final girl but since she's black, she'll serve a life sentence in prison for all of these murders." After watching "Get Out," it's hard not to think that most horror films could be improved with a touch of real life fright.