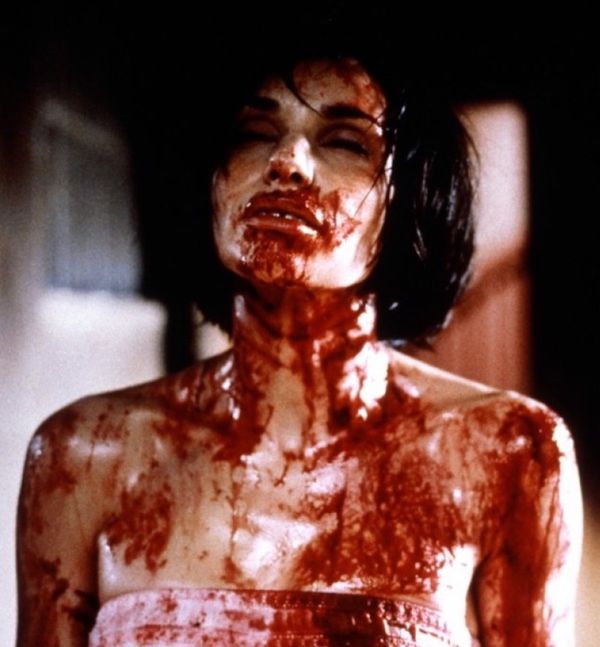 Vibe:
Beautifully fucked up, but also kind of depressing depending on your read. There's been extensive debate about whether this film is horror, or auteurism parading as horror. (And to the scholars debating that point, I serve you up with 5,000 eye rolls but still read all your academic articles because I also have no life and am likewise curious/pedantic).

In my mind, "Trouble Every Day" is a horror film that works outside the typical genre conventions while constantly referencing films from the canon. If you're squeamish, there are two gory scenes you probably won't want to watch, but it's otherwise relatively tame.

Best time to watch:
At the cinema on a big screen. I first saw this movie at BAM on Halloween in 2013 on 35mm. The man sitting next to me accidentally ate my Junior Mints, but it was my fault because I put them in his cupholder (his logic, not mine).

On a cold spring night when you're snuggled up in bed with your cats and don't feel like reading a book. My favorite way to watch movies (outside of a theater) is in bed on my laptop with a pair of headphones. To me, it's the most immersive experience and I feel like I notice things that I probably wouldn't if I were watching on a tv. (My college film professor would scream if he heard this).

When you want to be shocked by something and you're sick of the piss poor horror films of the past 10 years. Claire Denis and Agnes Godard might not be everyone's cup of tea, but they're certainly not amateurs; these ladies know how to craft a beautiful, expertly executed film.

Worst time to watch:
When you don't want to watch people (literally) tear each other to shreds and/or you've had enough of Vincent Gallo's bullshit. On re-watch, Gallo almost ruined this movie for me. He's inarguably a talented actor, but I think he's completely wrong for this role based solely on physical appearance. The close ups of his pimply, uneven, hairy skin were more disgusting to me than any of the bloody scenes. I would have preferred a prettier, more delicate male actor in the role of Shane (someone more on par with Tricia Vessey).

Quick summary:
Two people, vaguely connected by work they did together at a lab, are suffering from an illness that's given them an appetite for human blood.

Thoughts:
Critics hated this film when it first premiered, and I totally understand why. Although I personally love it (along with everything Claire Denis makes), I will admit that it feels less like a proper film and more like a tone poem or installation piece. I could see it playing on loop at The Whitney or ICA and achieving the same results. The world/mood/vibe are far more important than the plot and characterization. Without Agnes Godard's cinematographic expertise, this film wouldn't work at all.

Salon described the viewing experience in the absolute perfect way:

Watching “Trouble Every Day,” at least if you don’t know what’s coming, is like biting into what looks like a juicy, delicious plum on a hot summer day and coming away with your mouth full of rotten pulp and living worms.

The fact that I find this description enticing instead of horrifying probably says a lot about the kind of person I am.

If I have one major criticism, it's that the film is minimalist, but doesn't take that minimalism far enough. Part of me wishes that Denis had just said, "fuck it" and made "Trouble Every Day" either completely silent or with very sparse dialogue and plot. It doesn't matter why Shane (Vincent Gallo) and Coré (Beatrice Dalle) have a desire to consume their sexual partners. I don't need a lame backstory that loosely ties them together and alludes to scientific studies gone awry. Those details aren't important and add nothing additional to the overall meaning of the film.

Philippe Met sums up my issues far more eloquently in an essay for Kinoeye:

Despite occasional excesses of the flesh and accompanying flourishes of violence, Trouble Every Day is a superbly refined—or shall we say "lean"?—sample of cinematic art where such typical minuses as a flimsy plot, quasi-nonexistent characterisation, sparse dialogue and minimal regard for genre conventions all become assets rather than flaws. It could be argued, however, that therein precisely lies a relative snag, as too little is, so to speak, still too much.

What's interesting to me is the debate about whether or not "Trouble Every Day" should be classified as horror due to its disregard for genre conventions.

This conversation between Jason Bellamy and Ed Howard is a great read and provides some solid points for both arguments. I side almost completely with Ed Howard, who argues that the horror genre can actually be quite deep and more than just a gory, jumpy, fright fest.

Much like the romantic comedy genre, horror has been on the decline over the past 15 years. It's saturated with awful garbage like the "Saw" franchise and "A Serbian Film." This doesn't mean that the genre as a whole is devoid of potential, though. Howard aptly notes,

I think a genre should be a fairly neutral container: it can express whatever a filmmaker wants to express. In that sense, Trouble Every Day deserves to be considered a great horror film, an exemplar of what the genre can and should be.

I agree wholeheartedly and hope that talented future filmmakers don't shy away from the horror genre because they view it as too lowbrow. Take a note out of Claire Denis' book and use the genre as a jumping off point and then rail against it until nearly surpassing it entirely.