Vibe:
As creepily cold and controlled as Patrick Bateman. This film is not one I enjoyed watching and probably will never watch again unless I need to write about it. I definitely recommend watching it, but if your taste in film is similar to mine, once is probably enough for a lifetime.

If you read the book, hated it, and thought, "fuck no, I don't want to see the movie version," just know that it's much better than what you're likely imagining. Bret Easton Ellis is one of my most hated authors and I had to force myself to finish "American Psycho." Whenever I read about or see violence, especially if it's of a sexual nature and involving women, I ask myself if it's gratuitous or necessary to prove a point. Is it just for shock value or aesthetics or is it crucial to the overarching theme of the film or book?

I have zero interest in gratuitous violence and the book is filled to the brim with it. The movie, written and directed by women, strips all of that out and makes a much stronger, clearer statement as a result.
​
Best time to watch:
Now. Unsurprisingly, Patrick Bateman is obsessed with Donald Trump. This is more of a focal point in the book, but one mention is included in the movie. As Patrick and Courtney are on their way to "Dorsia," Patrick wonders, "Is that Donald Trump's car?" As far as we know, Donald Trump hasn't murdered anyone, but I think one could certainly make the case (which I will do later) that he and Patrick are essentially the same person. They have the same values, privilege, and respect for women (lol lol). The only difference as far as I can see is that Patrick Bateman actually has good taste when it comes to his fashion purchases.

I, too, rock the Oliver Peoples O'Malley frames.
​
Worst time to watch:
When you're already depressed about the state of the world/treatment of women and really don't need to see something that will set you over the edge. This movie will probably stick with you for days, so choose when you watch it wisely.

When you're in the mood for something beautiful and experimental. As previously mentioned, this movie is as tightly controlled as Patrick Bateman. It's also set in 80s Wall Street, when even "good" fashion sense is horrible, so it's kind of an eyesore.

I would also not recommend watching this while high. I think it would scare the shit out of me and I would have to sleep with the lights on. It's billed as a black comedy, but I found none of it funny. It hits far too close to home to elicit any laughter.
​
Where to watch:
If you have a Cinemax subscription, it's free there. You can also find it for $1.99 on Amazon and iTunes.
​
Quick summary:
Patrick Bateman is a young, Wall Street professional in NYC in the late 1980s. His coworkers think he's just a standard, awful young douchebag but what they don't know is that he's actually a psychopath who murders people (mainly sex workers) in his spare time. Or does he? Idk. It's up for debate.
​
Thoughts:
Until a few nights ago, I had never seen this movie the whole way through. I tried watching it once in grad school, but stopped during the scene with the two prostitutes. I watch a lot of horror films, but have a real problem with sexual violence on screen. I've been in countless fights with people who try to argue that violence against women can be negated when "there's violence against men, too!" Whenever I run into this faulty logic, I pull out Noah Berlatsky's excellent article in The Guardian and force my opponent to read it.

Tl;dr - violence against women is typically sexual, which makes it "exciting, important - and motivating." This is the line I usually find myself coming back to:

*Women are sexual objects; violence against them creates conflict between men, because men have an interest in controlling women's sexuality. That's a good thumbnail definition of patriarchy.
*
In the case of "American Psycho," the violence against women is always sexualized while the violence against men never is. BUT... in Mary Harron's movie, this choice is deliberate and made to prove a point. If we give Bret Easton Ellis the benefit of the doubt, it's probably also a deliberate choice on his part, too. The only difference is that his own, deeply ingrained misogynistic tendencies made it hard for him to know when to stop. Let us not forget these Tweets: 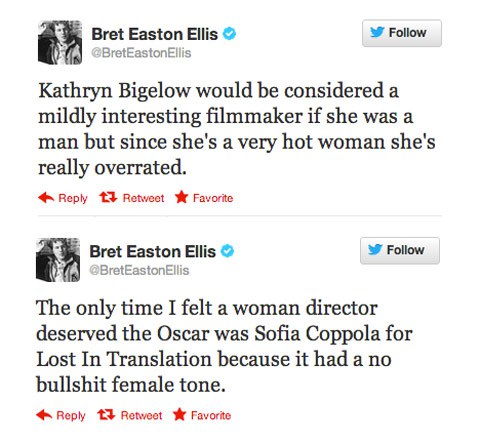 He also once said this:

There’s something about the medium of film itself that I think requires the male gaze. We’re watching, and we’re aroused by looking, whereas I don’t think women respond that way to films, just because of how they’re built.

Hey dipshit, how does it feel to know that an overwhelming majority prefer the film, written and directed by women, to your book? 💃🏻

But anyway, I read this movie as a 104 minute overview of white male privilege in America. If you have money and power, it's okay to act totally unhinged in public because people will just give you the benefit of the doubt. Or... your peers will be likewise self-absorbed and unable to listen to or comprehend anything you say or do, so there are zero consequences. In fact, they might not even know who the fuck you are because you're exactly like everyone else. You think you have distinguishing features? You don't. You think you're Patrick Bateman, but what does that even mean? You're just as much Hamilton, Davis, and Marcus Halberstram.

It angers you that no one knows who you are because you're great, dammit. Even when you start killing people and becoming increasingly sloppy about covering up the crimes, no one has any idea what you're doing and no one is going to stop you. Go ahead - keep a woman's head in your refrigerator! Shoot a cat in the face! Kill a bunch of cops! Life is meaningless because you're able to do whatever you want with zero consequences. It's like you don't even exist. Even committing atrocious, criminal acts won't garner you the attention that you crave.

There is an idea of a Patrick Bateman, some kind of abstraction, but there is no real me, only an entity, something illusory, and though I can hide my cold gaze and you can shake my hand and feel flesh gripping you and maybe you can even sense our lifestyles are probably comparable: I simply am not there.

He looks like a human, feels like a human, but is a soulless robot with no real thoughts, opinions, or feelings. He sexually abuses women and gets away with it. He says or claims to believe in anything as long as it serves his purpose at the time (remember his diatribe on apartheid and world hunger?). He's achieved a level of success and social status that makes him practically invincible. Does this description remind you of someone else? Maybe our President?

And why exactly do Donald Trump and Patrick Bateman have so much power? American capitalism! Here's a nice explanation from Karl Marx:

Money’s properties are my – the possessor’s – properties and essential powers. Thus, what I am and am capable of is by no means determined by my individuality. I am ugly, but I can buy for myself the most beautiful of women. Therefore I am not ugly, for the effect of ugliness – its deterrent power – is nullified by money. I, according to my individual characteristics, am lame, but money furnishes me with twenty-four feet. Therefore I am not lame. I am bad, dishonest, unscrupulous, stupid; but money is honored, and hence its possessor. Money is the supreme good, therefore its possessor is good.

White men like Trump and Bateman have power because they have money. It's nearly impossible for women and minorities to get enough money to gain Trump-like power in the United States because society has oppressed them since the beginning of time. Taking a look at the 2016 Forbes 400 list, only 12.5% are women. I'm not sure how many are minorities, because that figure isn't quickly available, but I would guess it's a very small percentage. After all, there are only 12 black billionaires in the entire world, so...

"American Psycho" might seem grossly exaggerated (it is satire), but it has to be in order to prove its point. Men sexually abuse women every day and face zero consequences (see Brock Turner and Harvey Weinstein). Money affords people the ability to say whatever fucked up shit they want sans repercussions or stripping away of power (see Donald Trump and Steve Bannon). If these truths weren't presented in a heightened fashion, they'd simply be par for the course and no one would blink an eye. This movie has to be fucked up, toneless, and weird in order to make an impression. If you think it goes too far, maybe take a look at the world around you. If reality were a little less horrifying, "American Psycho" could afford to tone down the insanity. 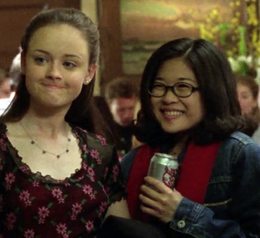 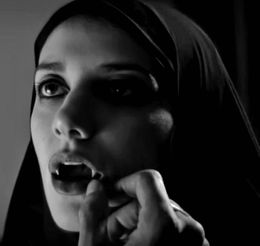