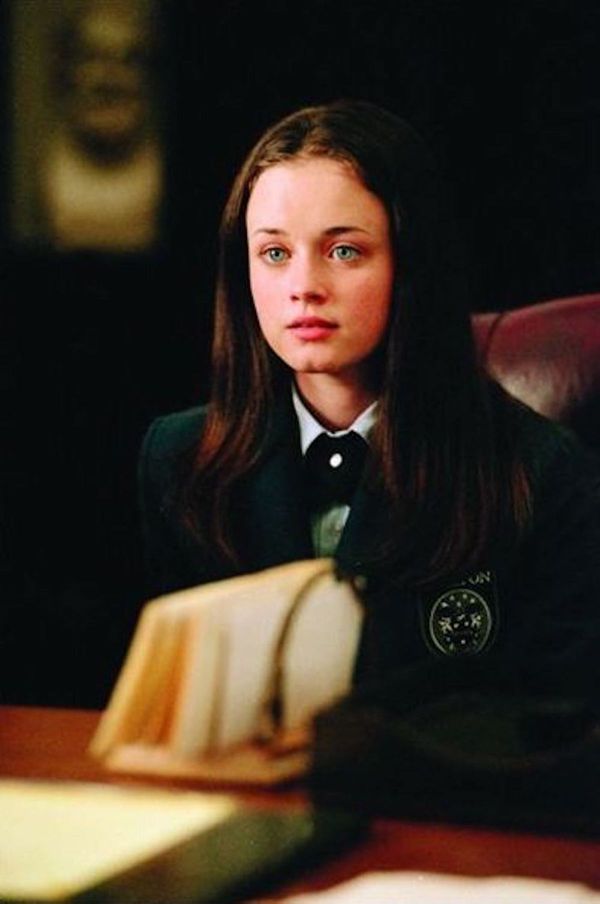 Directing and writing credits:
Written by ASP, directed by Arlene Sanford. Arlene is another veteran who has directed a shit ton of tv ("Pretty Little Liars," "Grace and Frankie," "Ally McBeal"). I'm always immensely impressed by directors like Arlene who are able to jump into any show and completely nail the tone and cadence. It can't be easy, but she makes it look like it is. "The Lorelais' First Day at Chilton" is her only "GG" credit.

Most batshit crazy outfit:
It would be remiss if I didn't give this award to Lorelai for her completely inappropriate, 'dropping my kid off on her first day of private school,' look. Her Paul Frank monkey pajama top would have been less cringeworthy than this monstrosity. Why does she even own light-wash jorts with a side slit? Did she make those herself? Like most of her shirts, this tiny, pink & white babydoll tee is far too small for her and looks like something that shrunk in the dryer but didn't get thrown out because of laziness or some weird affection for ugly clothing items.

She pairs this horror show with mid-calf, brown leather boots, a belted, dark wool coat, a stone pendant necklace, one of those ponytail holders with balls on either side, and ugly turd-colored lipstick. Why, Lorelai?! Why do you own any of these items. You 100% deserve Emily Gilmore's mockery.

Also, Lane wears a light pink, zip-up hoodie that says, "FOXY" during this episode. You know Lorelai's outfit is bad when it outshines this paragon of bad, early aughts fashion.

Most irritating Rory or Lorelai moment:
Neither of them did anything too egregious this episode. Lorelai's inability to properly adult is embarrassing, but we've all been there.

Number of times Rory or Lorelai treat their bff like shit:
Surprisingly, none! Rory even gives Lane her pizza crust. Mrs. Kim found a place to buy tofu in bulk, so Lane needs this small kindness more than ever.

Best literary or pop culture references:
"Now, walk smooth. That's the new Harry Potter on your heads. If they should drop, Harry will die, and there won't be anymore books." - Mrs. Patty, standing at the doorway of her studio while her dance class walks around with books on their heads.

"And I was in the German Club for a while, but there were only three of us, and then two left for the French Club after seeing Schindler's List, so.." - Rory, discussing her extra-curricular activities with Headmaster Charleston.

"Well, we like our Internet slow, okay? We can turn it on, walk around, do a little dance, make a sandwich. With DSL, there's no dancing, no walking, and we'd starve. It'd be all work and no play. Have you not seen The Shining, Mom?" - Lorelai, explaining to Emily why they don't need a DSL line installed. If I were Lorelai, I would take all of Emily's handouts without question. Gimme that free DSL and those Manolo Blahniks, Emily! I'll put up with your disdain in exchange for luxury goods.

Stars Hollow weirdness:
This episode was light on the Stars Hollow gang. I guess Babette, Morey, and their hatred for gnome violence take the cake. I never quite understood Morey's vibe. Are they going for chilled out, stoner, jazz guy? I think I would probably need to be stoned all the time to put up with Babette's antics.

Sharpest insult or one-liner:
"See? That's what happens when you go to bed with your makeup on." - Lorelai to Rory, after seeing Headmaster Charleston's secretary. If I had a nickel for every time my own mom uttered the same warning...

Apparently, Rory's English class is heavy on Tolstoy & Dickens this semester. I'm not sure who the teacher is, though. Where the f is Max Medina?

Best song of the episode:
"I'm the Man Who Murdered Love" by XTC. I will be forever indebted to Sam Phillips and ASP for introducing me to this band. Without "Gilmore Girls," I don't think I would have ever discovered them. If you haven't already, do yourself a favor and listen to "Wasp Star: Apple Venus Volume II" in its entirety. I would immediately abandon pretty much any task to go dance around like an asshole to this album.

Thoughts:
This episode is pretty boring, tbh. It's not as packed with quippy one-liners and pop culture references as the pilot and it largely focuses on Chilton, my least favorite part of the "GG" universe. Headmaster Charleston and his stupid facial hair can get bent. And Tristan Dugray deserves a swift kick to the dick. He's one of the worst, most intolerable characters on the show. I find it impossible to believe that Paris Geller would ever be interested in him/wouldn't see through his skeezy bullshit immediately.

And speaking of the amazing Miss Geller, let's discuss her for a minute. It takes the writers a long time to figure out how to correctly utilize Liza Weil's talents, but when they finally do, it's magic. Unfortunately, it really doesn't happen until Season 3 when Paris gets rejected from Harvard and has her epic C-SPAN meltdown. In these early episodes, Paris is just a typical, mean girl try-hard who surrounds herself with dumb people so she's always the smartest one in the room. I can't wait until the later episodes when her friendship with Rory really blossoms. If you haven't already, do yourself a favor and read Mallory Ortberg's ode to Paris and Rory on The Toast. Mallory Ortberg, if you ever stumble upon this blog, please know that I love you.

Aside from the big first day at Chilton, nothing major really happens. Lorelai has several flirty interactions with men of varying ages: the dad at Rory's school, the valet at the Inn, and Luke, of course. It's probably worth pointing out that thus far, all men encountered at Chilton kind of suck. Headmaster Charleston interrogates Rory about her future in a way that stresses me out even though I'm an adult and already have a career. If I encountered that kind of pressure as a kid in high school, it probably would have driven me over the edge. He's a total jerk about Rory's Christiane Amanpour ambitions and harshly reminds her that her grandparent connections won't get her any special treatment (even though they kind of do).

Tristan, who we've already discussed, is also terrible and actively worsens with time. Ian Jack, the dad who hits on Lorelai at Chilton, also gives me the heebie-jeebies. Just give her directions and stop eye-fucking her in front of her daughter. I know she's wearing jorts at 8AM, but that doesn't mean she's DTF. And I get it...Lorelai flirts back. But Lorelai flirts with everyone! And when he shows up at the Independence Inn that same day, she does seem a little taken aback. That level of thirst is just unbecoming, even if you are desperately attractive (which this guy is not).

One thing I must commend the writers on is the Luke and Lorelai slow burn that happens over the course of 4 entire seasons. Ever since the first episode, they've had great chemistry and witty repartee. It was always pretty clear to me that Luke was going to be Lorelai's HEA, but the tension leading up to their first kiss builds in an immensely satisfying way. In this episode, Lorelai is already asking Rory if she thinks Luke is cute! The writers laid the groundwork for this one from the very beginning and even on my millionth rewatch, I'm impressed that it was done so well.

Those are all valid points, Rory.