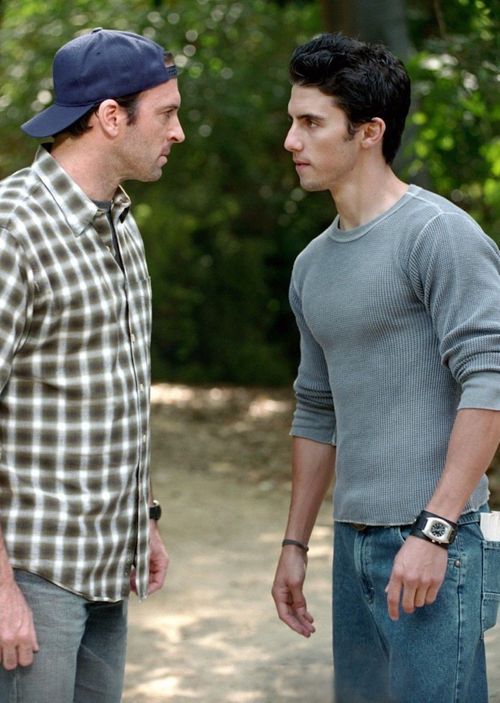 Fun fact about ASP: she cast Milo Ventimiglia before she even had a part for him. According to The Huffington Post,

She thought he was “cute” and decided to sign him before someone else did, before ever thinking up the role of Jess.

I would have made the same decision. If ASP hadn't locked him down, it's likely that another teen show, like "The O.C." or "One Tree Hill," would have pounced.

Most batshit crazy outfit:
Jess's debut outfit is A+ teenage dirtbag attire: baggy, dark wash jeans paired with a green camo sweatshirt, blue puffer vest, and hideous black (KEEN?) hiking boots. While this ensemble is fairly awful on its own, the accessories are what really take it to the next level. Jess complements the look with a paperback book in his back pocket (sacrilege), two leather bracelets (one cuff with metal hardware and one thin, gray band), and a pack of cigarettes. Even teenage Lindsay knew this wasn't a good look. Jess's tight, blue thermal, on the other hand... 🔥🔥🔥 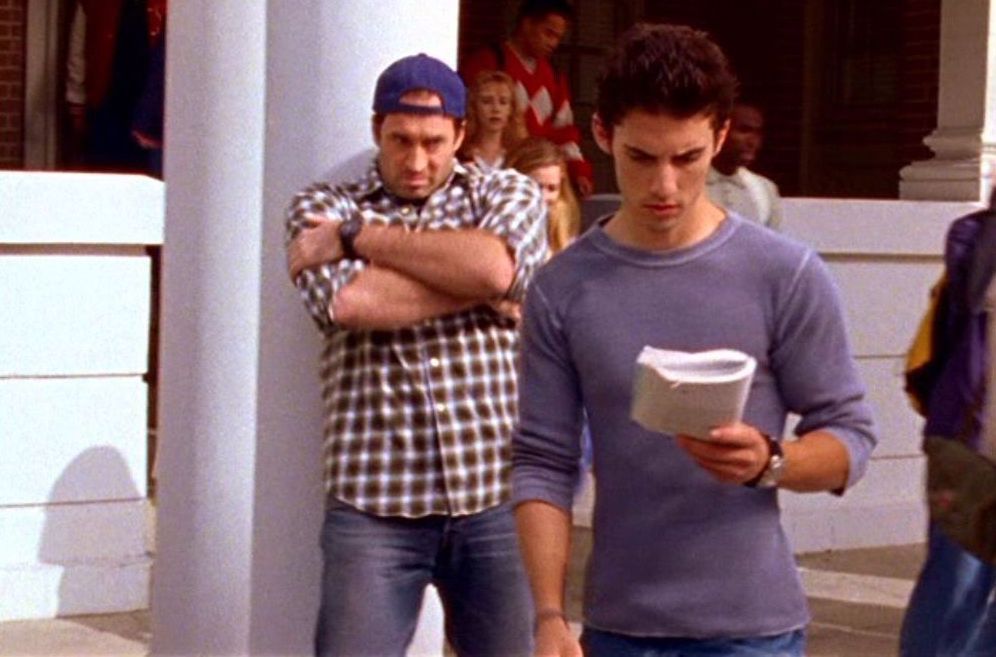 Most irritating Rory or Lorelai moment:
I hate when Lorelai tries to give Jess advice after she catches him out on the porch with one of her beers:

Lorelai: Ugh, Jess, let me give you a little advice. The whole 'my parents don't get me' thing, I've been there.
Jess: You have, huh?
Lorelai: Yes, I have. I've also done the 'chip on my shoulder' bit. Ooh, and the surly, sarcastic, 'the world can bite my ass' bit, and let me tell you, I mastered them all, in heels, yet. And everything you're feeling might be totally justified, maybe you are getting screwed. But ... Luke is a great guy. He's very special, and he really wants to take care of you and make things right for you. You're incredibly lucky to have him. If you give this situation half a chance, you might be surprised at how good it can be, how much you like living here, and how comfortable it feels to have someone like Luke you can really depend on.

It's like Lorelai has completely forgotten she's a) not Oprah and b) talking to a seventeen-year-old dude. Of course, Jess reacts to her Luke sermon like a complete asshole ("What, are you sleeping with him or something?"), but that's to be expected.

Number of times Rory or Lorelai treat their bff like shit:
Lorelai takes Sookie's dope cooking for granted for the millionth time, but other than that, nada.

Best literary or pop culture references:
Lorelai: Why don't you and Jess come over for dinner?
Luke: Dinner?
Lorelai: Sookie will cook, Rory will be there. It'll be a little 'Hey, welcome to Stars Hollow and see, everyone here's not straight out of a Fellini film' kind of an evening.

If the goal of the dinner was to make everyone seem normal and chill, it was a major fail. If I were Jess, Jackson and Sookie would have scared the shit out of me.

Oh God, I hope nothing's happened to him. You get so attached to their little faces, sometimes you can hear them talk to you at night.

Damn, Babette. If that's true, you might need a psych consult.

Sharpest insult or one-liner:
Not an insult or a one-liner, but omfg ... I love when Luke pushes Jess into the lake. Jess is such a monosyllabic little fucker in this episode. He constantly makes lame little digs that aren't funny or clever and is generally just pissy for the sake of being pissy. It's understandable he feels like shit after his mom dumps him off on an uncle he doesn't even know, but that doesn't give him a free pass for unfettered dickishness. 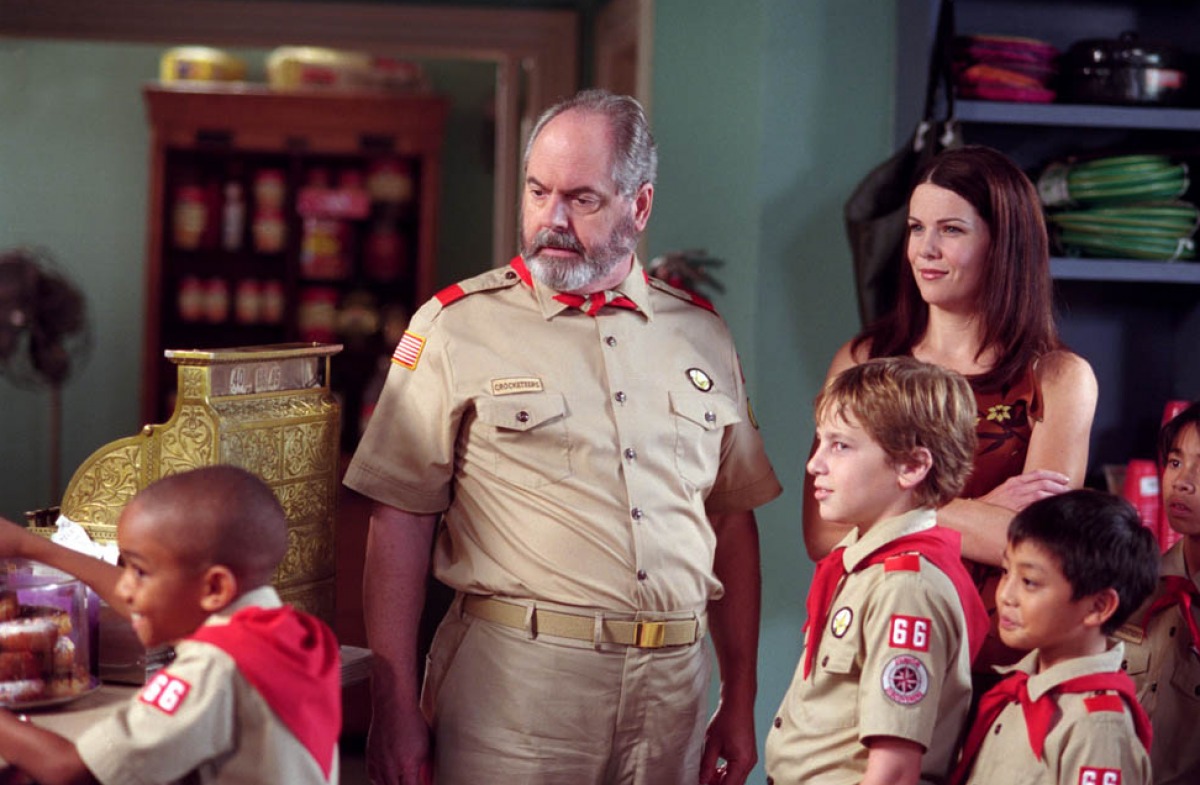 As soon as Jess arrives, the literary references increase exponentially.

Best song of the episode:
"Girl from Mars" by Ash. Tim Wheeler was 16-years-old when he wrote this song and it's probably his absolute best.

Thoughts:
Jess is inarguably awful when he first arrives in Stars Hollow. He's dismissive of Luke and unfriendly to everyone he encounters, aside from Rory. His behavior is inexusable, but it's also understandable. He was apparently so "out of control" that his mom couldn't handle him and decided to dump him off on an uncle he barely knows, in a place he's never been, during his junior year of high school.

Question: Who the fuck does that?
Answer: The kind of person who later marries TJ.

Jess isn't used to people who try to help or connect with him. Back in New York, Liz probably left him to his own devices while she spent her unemployment checks on various street psychics and replica arrowheads. (The show never goes into details about old Liz, so I have invented a back story for her in lieu of legitimate information.) Maybe Jess reads all the time and doesn't interact with other people very much because he has social anxiety. Maybe people have disappointed and hurt him in the past, so he avoids growing close to anyone. Or maybe he's just a complete asshole and think he's too cool for Stars Hollow and its occupants. I think the last hypothesis is unlikely. Yes, Jess makes a bad first impressions, but he deserves a chance to turn around his shitty attitude.

Even Jess haters can't disagree that it's nice to see him connect with Rory over something they both love. In high school (and even college), relationships are typically built on common interests. You listen to Wilco and read Kurt Vonnegut? We must be soulmates! My boyfriend and I started dating after a long, hungover conversation about David Foster Wallace (and some other authors I don't remember because like I said, I was hungover and concentrating hard on not puking). As an adult, books, movies, and music are still the way to my heart, they just aren't the basis for entire relationships anymore.

As a high school student, I thought Jess was the perfect guy. I didn't have the "GG" DVDs, so I couldn't rewatch the Jess episodes at my leisure, but I made sure to catch them on every ABC Family replay. I swooned so hard whenever he returned Rory's annotated copy of "Howl." In hindsight, this is vandalism and I would be hella pissed if someone marked up one of my favorite books with their dumbass musings. At the time, though, it seemed incredibly romantic.

As an adult, Luke's commitment to his family is more of a turn-on than Jess's Sal Mineo impression. Without ever meeting him or hearing what his issues are, Luke agrees to let Jess move to Stars Hollow and try his hand at parenting. In seasons 1-5, Luke is the fucking best. He might go off on tangents about "jam hands" and claim his sister is a "nutjob," but Luke can't hide the fact that he'll do whatever it takes to help someone who needs it. And it's not as if he only does the bare minimum. Remember the Frosted Flakes? Luke may act like he gives zero fucks, but he actually gives all the fucks.

After Lorelai's speech, it seems crazy to me that she doesn't realize how hard she's crushing on Luke. If he disappeared from her life, she would go off the deep end. She takes Luke's reliability completely for granted and it's nice to see her begin to realize how much he does for her when Nicole enters the picture in Season 3 and takes up more of his time. 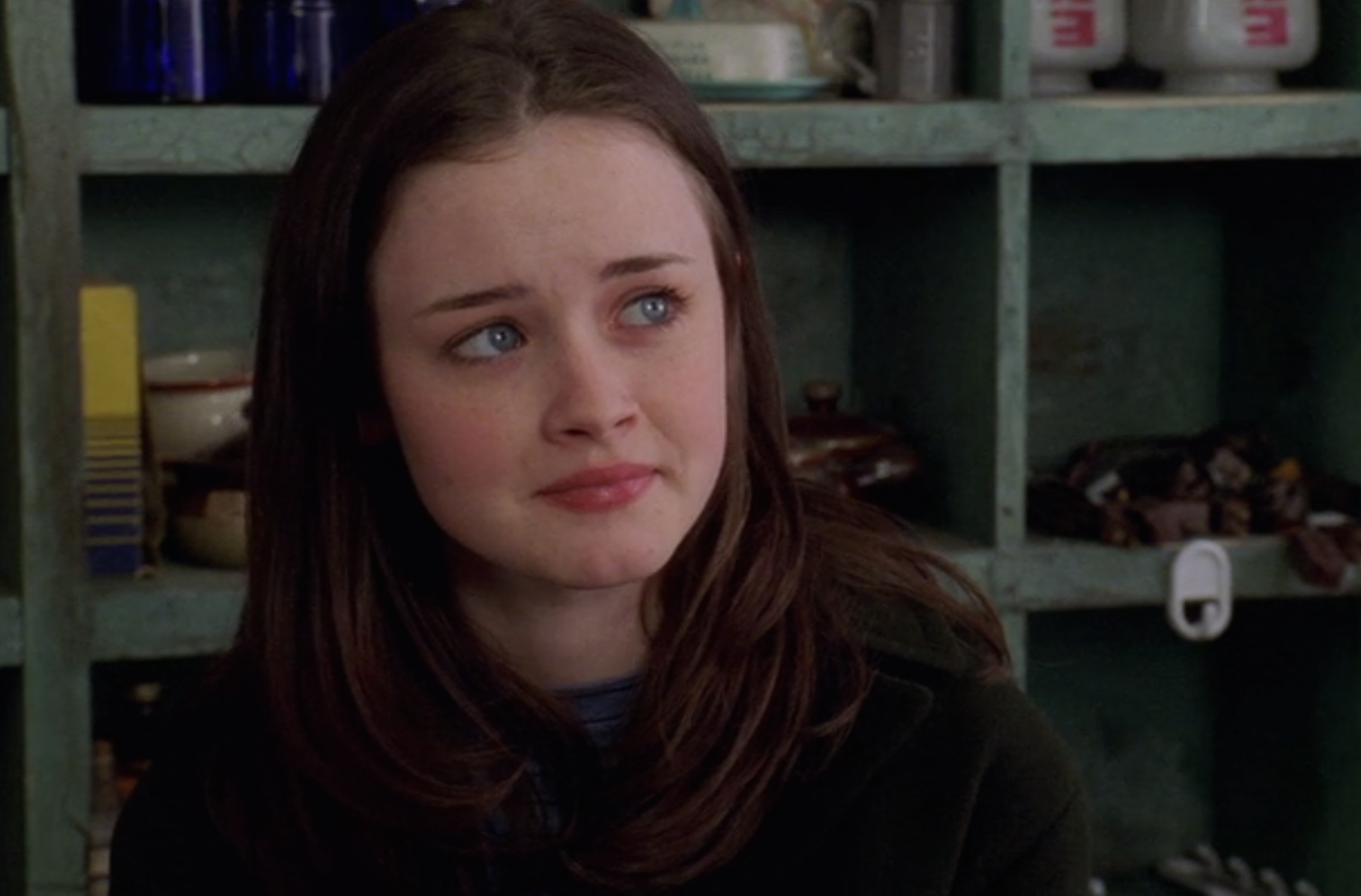 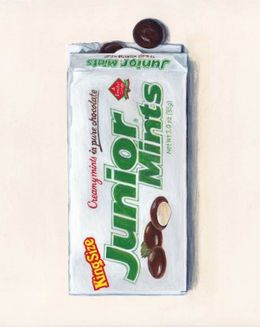 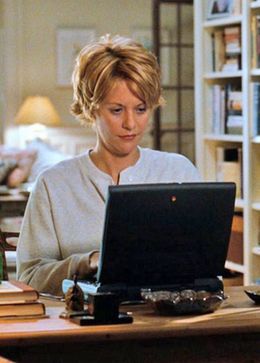