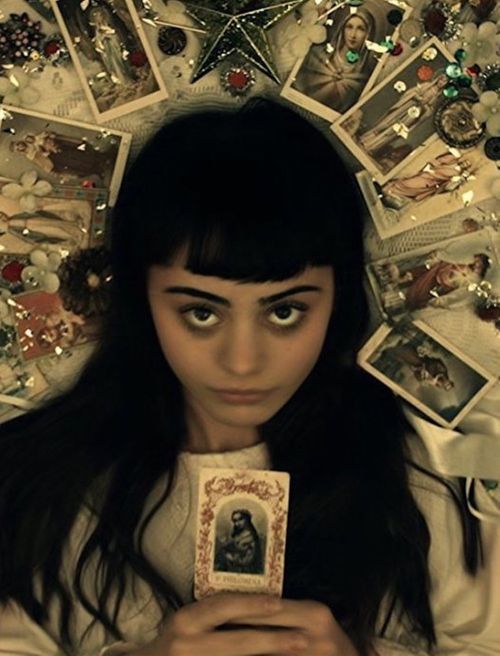 Vibe:
"The Book of Birdie" is a weird, glittery, feminine fever dream. It's creepy, but not scary, bloody, but not disgusting. Most scenes take place in a church or a convent and contain multiple shots of religious iconography, but the visuals never feel rote or boring. I tend to role my eyes whenever I see yet another horror movie set in a Catholic church, but this one manages to avoid all the typical cliches. Even the lingering, close-up shots of the crucifix in Birdie's (Ilirida Memedovski) room feel new and strange.

This movie made me think of Julia Ducournau's "Raw" and Lucile Hadžihalilović's "Innocence." If either of those are your jam, I think you'll enjoy "The Book of Birdie."

And omg ... I somehow forgot to mention the best part until now: there are no men in this movie. NONE. ZIP. ZILCH. The entire cast is female 🙌🏻. There's even a queer love story (although it kind of gets abandoned at the end, but we'll talk about that later).

Best time to watch:
With your daughter right before she gets her first period. Is that too specific? If I ever have a daughter (which I probably won't because I don't want children), I have a running list of coming-of-age movies that are mandatory viewing before puberty and first sexual experiences. Along with the aforementioned, we would watch "Heavenly Creatures," "Mustang," "Water Lilies," and "The Virgin Suicides." 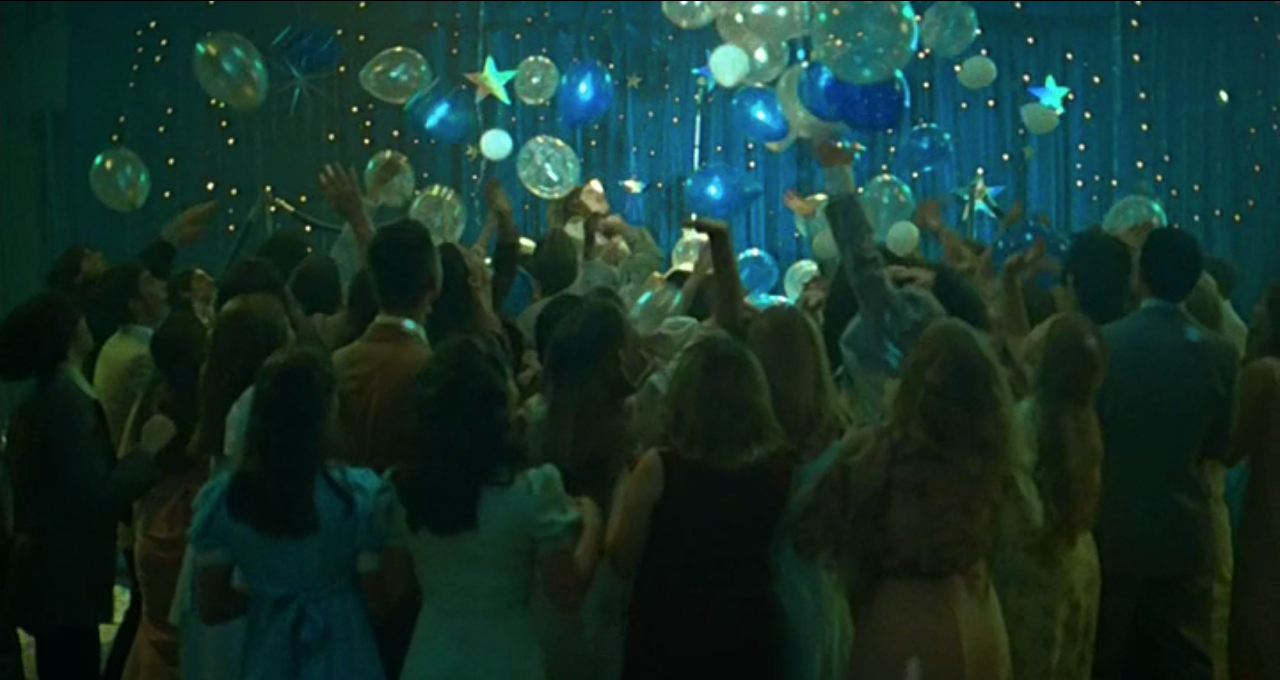 I hate when people say mean things about Sofia Coppola.

The ideal time to watch is right before Halloween, when the weather has turned and all the fiery leaves are soaked with cold rain. I'd light one million candles (which would give my husband heart palpitations), grab a bunch of blankets, and watch this movie with my cats (and a box of Cracker Jacks). Maybe I'd even pull out my Monsters of Modern Literature card set, aka my version of patron saint prayer cards. Blessed be Joan Didion 🙏🏼.

Worst time to watch:
Don't watch if you're with someone who doesn't appreciate macabre shit. If you're in the company of someone who owns one of those, "live, laugh, love" signs, do not watch this movie with them because they will not enjoy it and their inane commentary will ruin it for you. FYI, if you're past the age of twenty-two and still friends with this person, you might want to reconsider your life decisions.

Where to watch:
Unfortunately, I don't think it's available for streaming anywhere right now but I will update this section with info whenever I know more about distribution. I was able to watch it thanks to the Final Girls Berlin Film Festival. In the meantime, you can check out the trailer:

Quick summary:
Birdie is a young girl with strong Lydia Deetz vibes. She's beautiful and quiet, but as far from boring as you could possibly imagine. After her grandmother ships her off to live at a dying convent, she starts to hallucinate, collect jars of her own blood, and fixate on Saint Philomena. I am 98% sure Birdie is an INFJ.

Thoughts:
Whenever I was younger, my parents had a book with glossy, biblical drawings, and I remember pulling it out and staring at the crucifixion scenes in fascination. The whole thing felt like a wild fairy tale, but it was far superior because it involved a graphic murder and the illustrations featured blood. My parents shooed me out of the room when they watched "Silence of the Lambs," but I could look at this book whenever I wanted.

I never really got into religion, but I can totally see the appeal. Yes, the whole, "save your soul from eternal damnation" is a big part of it, but I'm talking more about the violence, ritual, and sheer pageantry of it all. Especially for a young girl who sometimes does abnormal things, the concept of praying to atone for sins is better than wallowing in guilt and self-doubt. When crazy things happen in life, it's comforting to cling to rituals, to maintain a sense of normalcy.

If something bad happens and you don't feel comfortable talking to another person about it, you can pray and talk to Jesus (or Saint Philomena). Religion allows you to be secretive but still feel as if you've shared a part of yourself with someone. I'm simplying this tremendously, but that's only because I'm trying to approach it with the mindset of a teenage girl who has secrets to hide, no one to turn to, and a wild imagination. 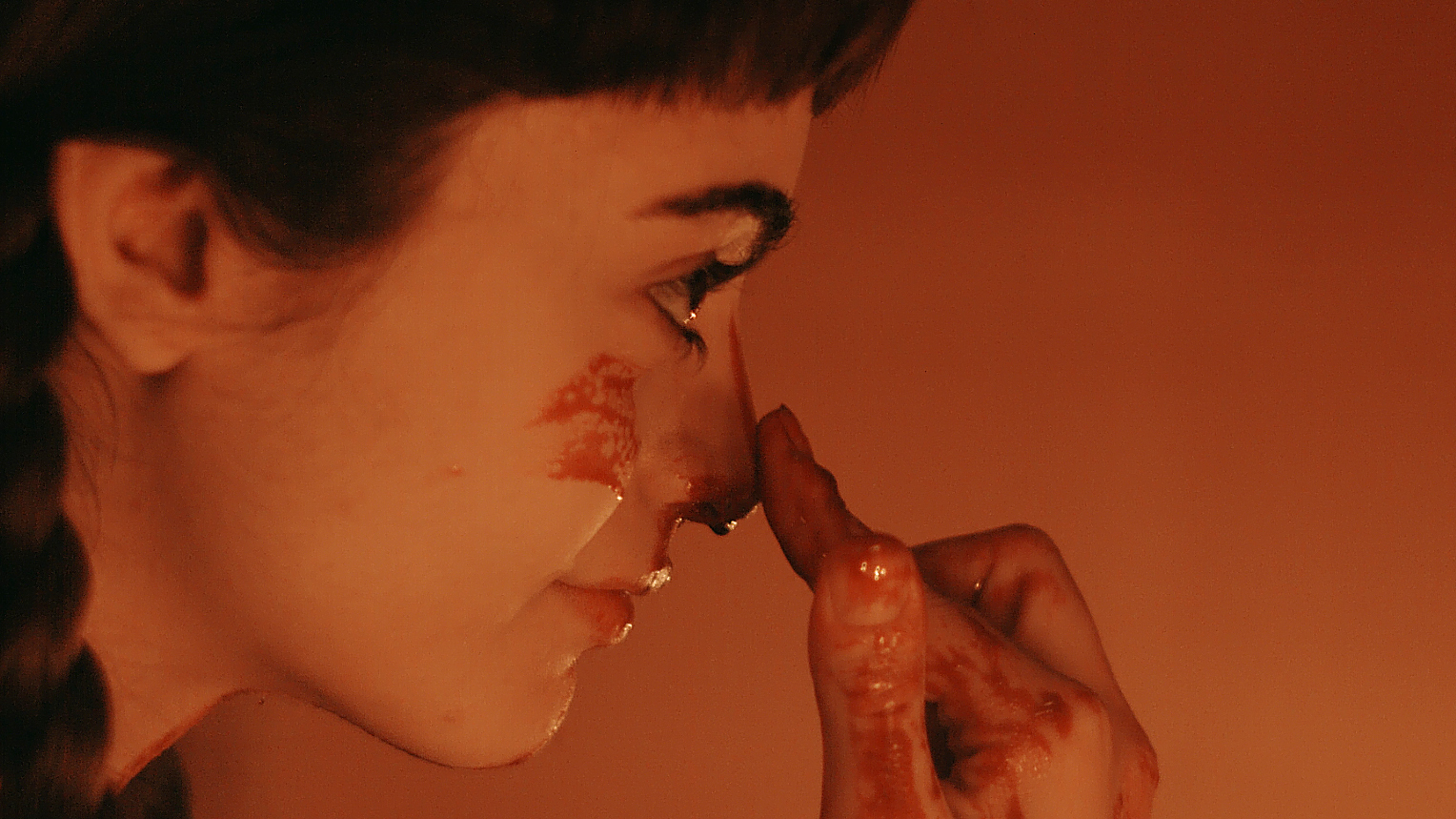 At the beginning of the film, Birdie covers her face with blood while looking in the mirror at her smiling reflection. In the next scene, her grandmother drops her off at a convent, successfully shrugging off her guardian duties without much of an explanation. Why does she want Birdie to live in this cold, repressive place? Later, after Birdie miscarries what looks like a fetus, it all makes sense.

Based on what she tells the dead nun at the bottom of the steps, it sounds like she was raped. The nun suggests that "he" has touched her, marked her, and that Birdie let him enter her. Birdie replies, "I didn't. I didn't let him. He was bigger and stronger." Of course, "he" could refer generally to Satan, but as the miscarriage scene seems like reality and not a hallucination, I believe Birdie is speaking in specifics. This scene is crucial because it affects my interpretation of the entire film.

Birdie is raped and since her grandmother sees it as a sin, she ships her off to a convent without fully explanining the situation to anyone. Birdie miscarries in secret and begins to take comfort in religion as she has no other confidante. At the same time, she's struggling with a whole host of issues - probably some combination of PTSD, anxiety, and depression. She makes unorthodox choices (like pickling her fetus in a jar of vinegar and collecting her own blood in glass jars and drinking it) and experiences vivid hallucinations.

Glitter, superheroes, and weddings. What more could you want?

While she struggles to figure out what the fuck is going on, people around her choose to ignore signs that she needs help. Instead of finding a sink full of blood and telling someone about it, a parishioner at the church blesses herself and chooses to believe that Birdie has the stigmata. In this bizarre world, the stigmata makes more sense than a girl who is self-harming because she's dealing with mental illness.

When Birdie prays, it's usually to Saint Philomena, patron saint of infants, babies, and youth. Not much is known about her, but Catholic.org says,

"When Philomena was 13-years-old, she took a vow of consecrated virginity. After her father took his family to Rome to make peace, Emperor Diocletian fell in love with Philomena. When she refused to marry him, she was subjected to torture."

Birdie seems to identify deeply with Philomena, or at the very least, find comfort in her presence. Philomena's symbols - anchors, arrows, a palm symbol, and a flower - are seen throughout the film, typically during Birdie's hallucinations and the paper puppet sequences. Like Philomena, no one seems to respect or understand her. She internalizes all of her thoughts and feelings and never even reveals much to Julia. At the end of the film, her grandmother remarks that she looks sick, and the final shot shows her dressed in white, surrounded by some of Philomena's symbols, bleeding in the snow. 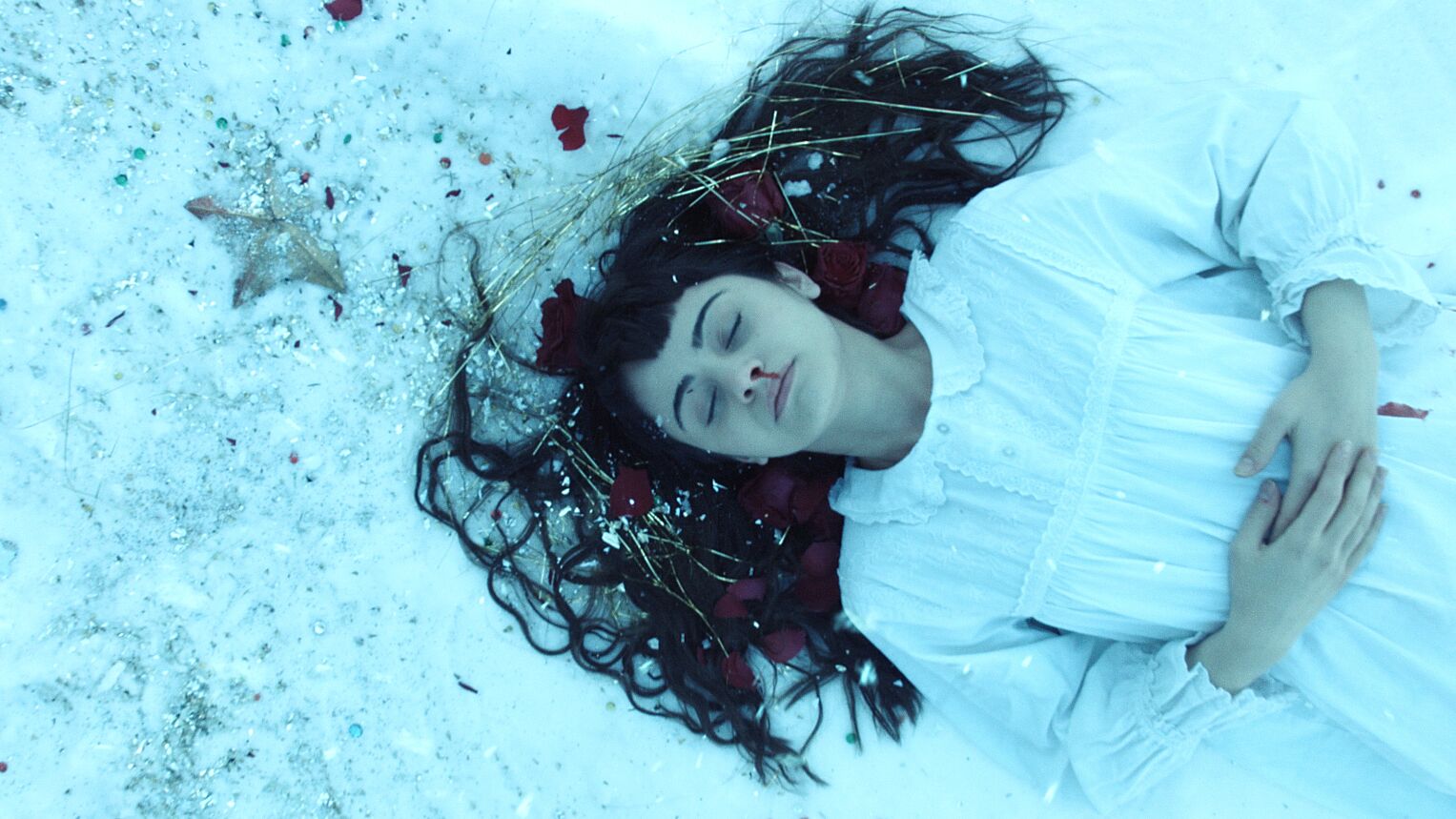 Being a young girl is tough; being a young girl with horrible trauma and no one to help is impossible. "The Book of Birdie" explores what it's like to suffer in silence. It's a beautiful, modern day horror film, perfect for a world that let Donald Trump become President and awarded Kobe Bryant and Gary Oldman Oscars. 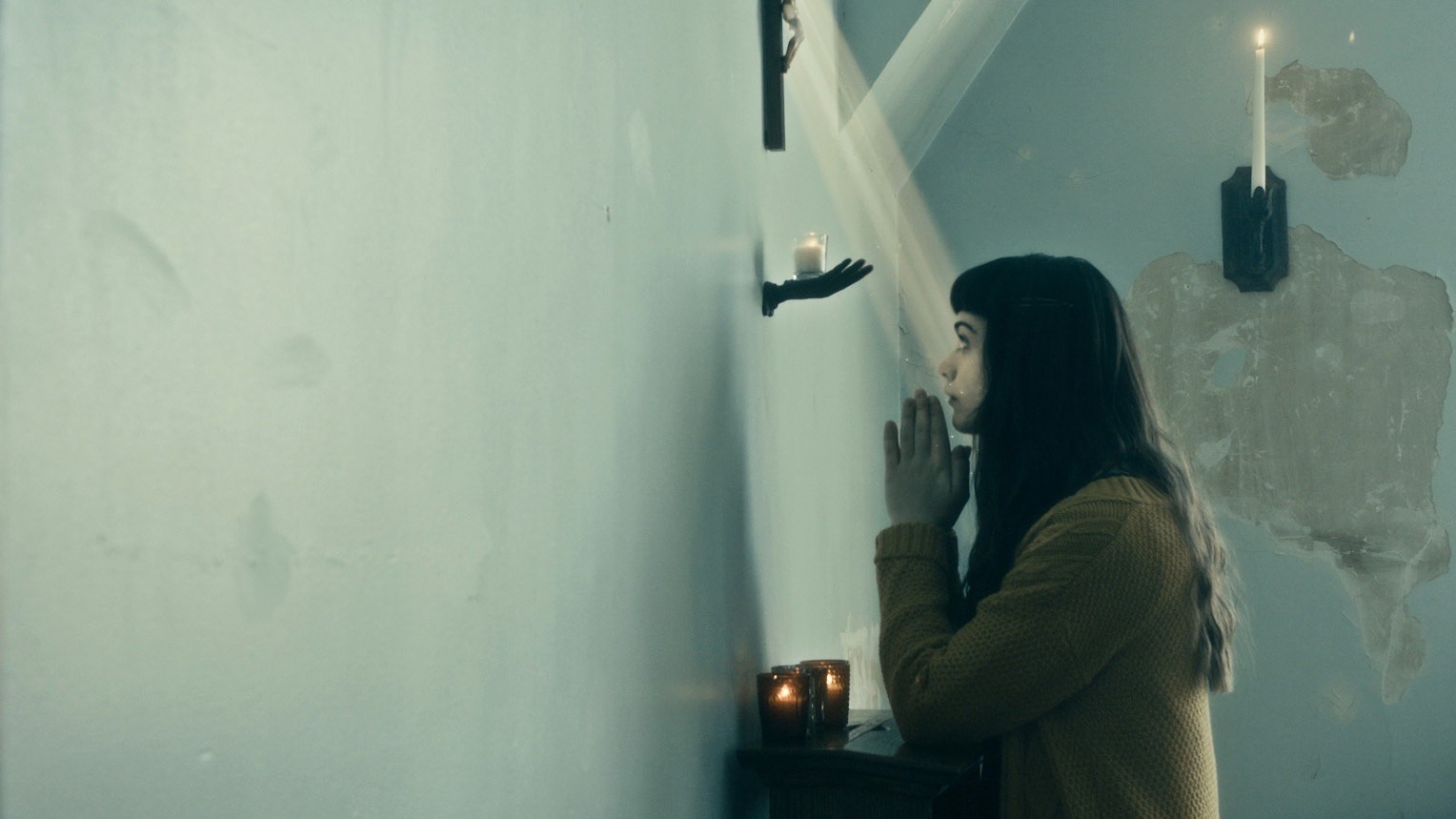 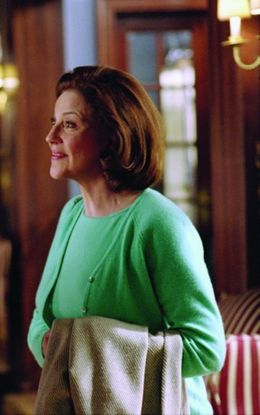 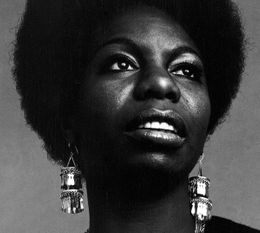