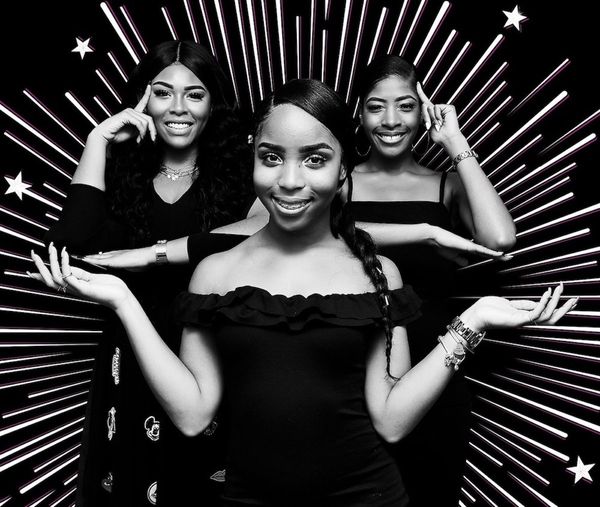 Vibe:
If "Step" doesn't make you happy cry, I think you're probably a robot. I attended a screening with the director at the Crosby Street Hotel on August 1 and I teared up on multiple occasions. I didn't take any notes, so I'm probably going to horribly misquote Amanda Lipitz, but she said something like this before the film started:

These girls show nothing is impossible when you surround yourself with a group of powerful women.

This film should be mandatory viewing in classrooms/for all young women. If you're a teacher and interested in showing it to your class or someone who has $$$ and wants to sponsor a classroom so they can see it, shoot an email to info@stepgroupsales.com and they will hook you up.

Best time to watch:
Next time you need a reminder about the power of a good female support system. In part, this movie reminded me why I started WiR in the first place. It's hard for young female filmmakers to get funding for projects and good press from predominantly male critics who either a) misunderstand their POV or b) don't give their films the time of day. I wanted to create a space that would highlight the work that is so often ignored. I'm beyond excited every time a young filmmaker reaches out and asks me to watch their movie or meet up to talk.

"Step" is a reminder that there are good people in the world who want to help. In fact, there are incredible people like Coach G and Paula Dofat who dedicate their lives to helping girls succeed. If you're someone like me, who thinks most people suck/are assholes, this this movie might push you to stop making that assumption and to give people more of a chance.

If you are in a position where you can help other women - by listening to problems, offering up advice, or making introductions - do it. If you're someone who needs help, ask for it. When women help other women, wonderful things can happen.

One thing I will say is that this type of documentary isn't something I typically gravitate toward. It doesn't play with the form in an interesting or challenging way (like "Waltz for Bashir" or "Our Daily Bread") and it doesn't have a strong political message/isn't a social critique (like "13th" or "This Is Not a Film"). Its purpose is to uplift, inspire, and shed some light on the Baltimore Leadership School For Young Women.

If your film preferences are similar to mine, I still recommend "Step" but urge you to go into it with the correct expectations. If you've seen the trailer, you might think that it's going to focus more deeply on inner-city Baltimore, Black Lives Matter, the murder of Freddie Gray, etc. The film does touch on those topics, but only tangentially. The focus is very narrow - on a small group of girls and their lives - so don't expect it to dive deeply into any of the aforementioned topics.

Where to watch:
"Step" is currently playing in select theaters.

Quick summary:
"Step" chronicles the senior year of 3 girls on the step dance team at the Baltimore Leadership School For Young Women. BLSYW is an all-girls, college preparatory public charter school with the goal of sending every student to college. The film focuses on step, family dynamics, and the difficulties of senior year/preparing for college.

Thoughts:
I'm going to be real with you: I was kind of worried going into this film. I wasn't sure how a white woman was qualified to tell the story of a black, all-girls step team. I haven't seen anyone else talk about this, so maybe I'm an asshole for thinking it, but I want to be transparent. Whenever I found out that Amanda Lipitz's mother founded BLSYW and that she had known the girls in the film since they were 12-years-old, I felt much better. The school and its students are obviously close to Lipitz's heart and her relationship with them provides a level of ease and comfort that a more outsider filmmaker might not have been able to achieve.

This A.V. Club article does something that I find really annoying and see all the time, especially in reference to Sofia Coppola. Here's the excerpt I found most grating (the last line in particular):

The Baltimore Leadership School For Young Women itself is painted in the best light, but of course it would be; Lipitz’s mother founded it, a fact that Step doesn’t feel the need to acknowledge. Nor does it bother to mention the fact that the filmmaker’s father has an entire center named after him at Johns Hopkins, where he was formerly on the board of trustees. It might not teach you to be a documentarian, but money sure can buy some uplifting endings.

Wait, so let me get this straight. In a documentary that doesn't feature the filmmaker in any way because the movie isn't about her, she is supposed to somehow disclose her family ties to the school? Why? If you want to know more about the filmmaker after watching, you can go to her website or quickly Google her and find out that her mother is the founder. She's not trying to hide it! Her website actually links out to promotional materials that she's created for the school in the past and she was very open about her connections to BLSYW during the Q&A after the screening I attended.

And like I said... knowing this background information helped me understand why she felt qualified to tell this story. I didn't find it problematic in any way. Like... oh, how dare you use your family connections to tell a beautiful story about a strong group of girls while at the same time shining a spotlight on the school they attend and its wonderful mission of sending every kid to college. The audacity!

I'm also beyond tired of critics writing off certain female filmmakers because of money/connections. Why does any of that matter? I personally couldn't give two shits if the filmmaker's father is the Sultan of Brunei and bankrolling all of her projects. If she's putting out good, meaningful work and using her privilege to tell important stories that the world needs to hear, then great! Having privilege doesn't make it any less of a risk to put your work out into the world for other people to watch and criticize.

What I very much liked about "Step" is that it focuses deeply on three girls and their journey leading up to graduation. It doesn't use talking heads or voiceovers and the only alternate characters are ones who are part of the girls' support system - namely, guidance counselors and family members. There's a bit of framing around the city of Baltimore and the climate there in 2016, but the city isn't really a character like it is in some documentary films; it's more of a backdrop.

I can definitely see how some people might want more from this film. More about Baltimore, Freddie Gray, the girls' families, the step choreography process, and BLSYW. It's all interesting and an hour and twenty-three minutes isn't enough to cover it all. I think it was wise of Amanda Lipitz to include pieces of information to flesh out the world of the film, but to restrain herself from including too much.

I do agree that the film is a bit like a long promotional video for BLSYW, but that doesn't bother me. I'm happy to see that school and these girls in the spotlight. I know what it's like to be a young girl in America, growing up in the suburbs with middle-class parents. It can be lonely, isolating, and tough. It's easy to feel like the world doesn't give a shit about you or your problems. It's hard to find people who are willing to support your dreams and offer you some guidance.

I don't know and can't even imagine what it's like to be a young black girl in America, growing up in inner-city Baltimore and worrying about how your parents are going to put food on the table. Thinking about your future when the present is so uncertain must feel impossible. I'm happy to see that at BLSYW, people are making sure that these girls don't fall through the cracks. Guidance counselors and teachers are thinking about each of them individually and figuring out how to help them succeed. These girls are not just statistics; they're people. I applaud this film for highlighting them and telling their stories because they are important and deserve to be heard.