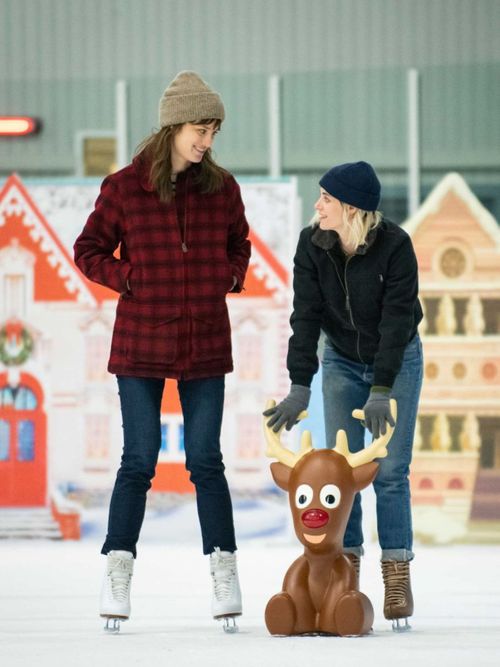 Vibe:
“Happiest Season” (2020) is like all of my favorite holiday treats: Mostly sweet, sometimes stomach churning, and made without a cookie cutter.

Best time to watch:
When you’re looking to turn off your brain but not too much, in the mood for a rom-com sans the normal amount of patriarchal bullshit that goes with it, or looking to believe love can conquer all—even your deep-seated lies and crazy family—this will do the trick.

Worst time to watch:
Stay away if you’re looking for something to hate, have recently had your heart broken or broken someone’s heart yourself, are feeling lonely this holiday season or are going through it with your family. Also, if your parents recently died and you’re not ready for orphan jokes, I’d steer clear.

Where to watch:
"Happiest Season" is available on Hulu.

Quick summary:
Abby (Kristen Stewart) goes home for Christmas with her girlfriend, Harper (Mackenzie Davis), and an engagement ring stowed away to pop the question. Before they arrive, Harper confesses she’s not out to her family and asks Abby to pretend to be her straight friend for the next few days. Abby reluctantly agrees after Harper promises to tell them after the holidays, without time to fully grasp how hard that will be or knowing how badly Harper will behave.

Since mid-March, I have been nearly incapable of watching movies. I read a few books most weeks and have written multiple essays clocking in at 1,500+ words, but something about watching a TV screen inevitably ends with me doomscrolling, rewinding when I realized I stopped paying attention, repeating that 3-5 times and giving up.

But from the very first sparkly scene, I was all in for this movie. Harper is on a mission to get Abby to love Christmas as much as she does, and in the middle of a twinkle-lit, adrenaline-fueled makeout sesh in the opening scene, invites her to come spend the holidays with her family.

Without going into too much summary, things quickly go downhill from there: Harper tells Abby on the way that she’s not out to her family, Abby is accused of shoplifting and does a brief stint in mall jail, Harper’s exes—male and female—keep showing up, and Harper can’t decide what the hell she actually wants, aside from remaining the love of Abby’s life and the apple of her parents’ eyes, two outcomes seemingly at odds.

Midway through, Harper’s ex-girlfriend, Riley (Aubrey Plaza), befriends Abby and fills her in on the details of their relationship and breakup which Harper glossed over. Namely, Harper outed and abandoned Riley in high school. Despite that bombshell, while Riley and Abby sat at The Oxwood Inn taking in a drag show and drinks, I found myself silently whispering: Please, please don’t let them get drunk and hook up. When I tuned into Twitter later, I learned the rest of y’all were screaming for them to get together. And it makes sense. They were the stable, successful, attractive pair. They seemed well matched intellectually and emotionally, not to mention a cute-as-fuck couple.

But, apparently, I identify as a Harper. While I am neither gay nor from a wealthy family, I have brought my fair share of family baggage and unresolved mental health issues to relationships, and wanted to see Harper be better rather than watching Abby find better.

These days, I’ve established some healthy boundaries, done a lot of work in therapy and made great strides with Zoloft. But it wasn’t always like that, and my now-husband put up with the final dregs of my hot mess nonsense when I was his barely-girlfriend, and I am so grateful he stuck around while I got it together. We all deserve to have someone who is well-adjusted, dealt with their toxic family and addressed their problems in therapy. We also all deserve to have someone who loves us despite our maladjustments, toxic family and ongoing work in therapy.

My read on Harper is that she’s a woman trying and failing and trying again. It often doesn’t look like it. Who the fuck ditches their girlfriend, who they’ve already shoved back in the closet, for drinks with an ex-boyfriend? Who doesn’t defend their partner when their family thinks she’s a kleptomaniac? A person dealing with a lot of unresolved childhood issues and internalized patriarchal, heteronormative, conservative bullshit, that’s who. The person is not a hero. But they’re also not a villain. They’re someone with a lot of growing and unlearning to do, ideally with the help of a mental health professional.

After Harper’s bratty sister (Alison Brie) outs her to the family and Harper denies being a lesbian, Abby storms out of the house with her best friend John (Dan Levy) on her heels, leading to my favorite scene of the movie:

“Harper not coming out to her parents has nothing to do with you,” John tells her. He reminds Abby that her parents loved and supported her when she came out and continues,

“That’s amazing. My dad kicked me out of the house and didn’t talk to me for 13 years after I told him. Everybody’s story is different. There’s your version and my version and everything in between. But the one thing that all of those stories have in common is that moment, right before you say those words, when your heart is racing and you don’t know what’s coming next. That moment’s really terrifying. And then once you say those words, you can’t unsay them. A chapter has ended and new one’s begun and you have to be ready for that. You can’t do it for anyone else. Just because Harper isn’t ready doesn’t mean she never will be, and it doesn’t mean she doesn’t love you.”

Abby responds, “I want to be with someone who is ready.”

And yet, I’m glad when Harper does come out and goes running after Abby. It might not have worked. It would have been perfectly okay for Abby to say she was sticking with her decision. But I was glad she didn’t. They—and more specifically, Harper—have a lot of work to do. (And as Nora Long pointed out, there were ways that work could have easily fit into the movie.) But I was sold on the fact that they truly loved each other and were ready to do it.

In the end, “Happiest Season” was a romantic comedy that not only features a queer love story, but also portrays characters as human—deeply flawed, desperate to be loved and doing their best to give love in return. And that, my friends, is a holiday treat I can get behind. 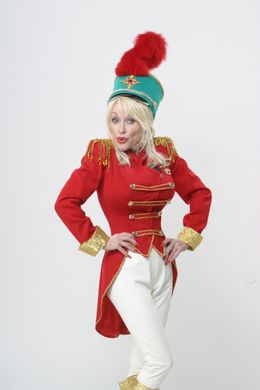