Crystal Correa is the creator, writer, director, and titular protagonist of "Crystal the WebSeries." I talked to her on the phone forever ago and am just now getting around to compiling this interview. Whenever we spoke, I was in a pretty bad mood.

I was in NYC for work and had just walked back to my hotel room after an 11 hour day in the middle of a snow/rain storm. The only pair of shoes I brought with me (a pair of Nike Flyknits) were soaked and smelled like garbage. I wanted to punch something. But then I talked to Crystal and she instantly put me in a good mood. She's a warm, open person - super easy to talk to and willing to answer any random question I threw at her.

To give you more context about what to expect when watching, here's a brief rundown of "Crystal the WebSeries":

Vibe:
Goofy, sweet, and funny. "Crystal the WebSeries" reminds me of "Mad TV" or something you might have seen on Nickelodeon in the 90s.

Best time to watch:
Check out this web series whenever you're strapped for time but want to watch something that will quickly boost your mood. All six episodes are under five minutes each and the perfect thing to keep you occupied on your subway commute or during a break at work.

Worst time to watch:
Don't watch when you're looking for something new to eat up all of your time and give you a reason to live. "Crystal the WebSeries" isn't "The West Wing." It has six episodes so far and you can easily binge all of them in under twenty minutes.

Where to watch:
You can stream Episodes 1-6 on Vimeo for free. Why the heck wouldn't you watch? 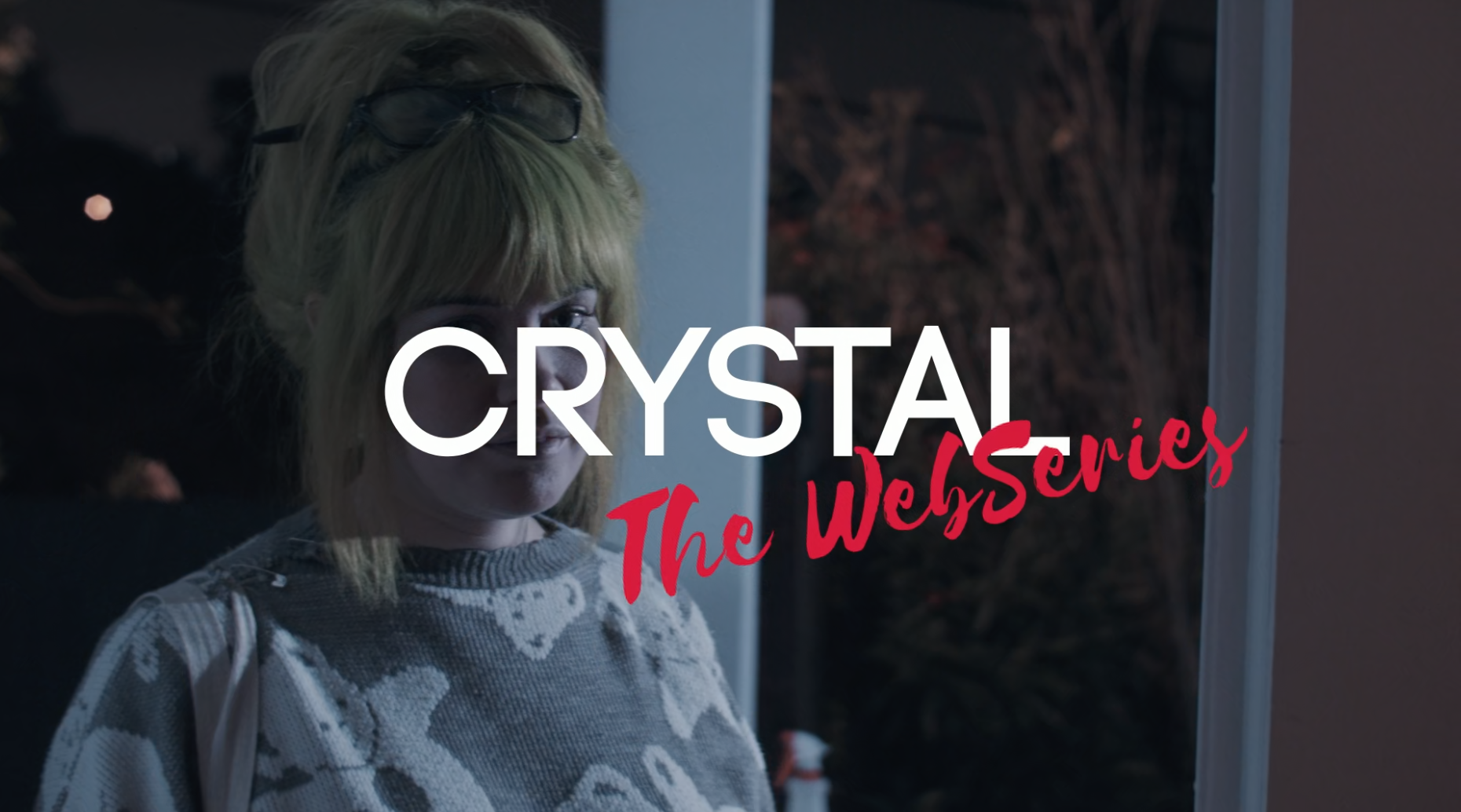 The opening credit fonts are awesome, as is Crystal's sweater.

Quick summary:
"Crystal the WebSeries" is about an introspective young woman named Crystal who is fresh off a break up and trying to figure out what to do with her life. Her roommate, Nikki, is her polar opposite and sometimes makes their living situation pretty awkward.

WiR: What inspired you to start "Crystal" and how long did it take you to finalize the first episode?

Crystal Correa: A year after I moved to LA, I realized I wasn’t going to get the roles or the outcome I wanted if i didn’t start breaking down walls and expressing myself more. So I started writing. Creative writing has always been hard because I could never slow down my ideas but storytelling is fun to me. When I started screenwriting, it just flowed.

The original “Crystal” idea was more of an “ask Crystal," where I give advice and help people. I decided to split that story and keep “Crystal” simple for two reasons:

It’s taken me two years to finally lock down my top six episodes and start saving money to produce the project. Once we shot it and submitted to festivals it took another two years to finally be able to release it. But I've been writing other characters and stories during that time - so it’s not all about “Crystal," it’s all about timing!

Each episode feels very personal. Do you take a lot of details from real life?

It was hard for me to share my opinions about different topics that really bugged me with everyone. I never want to hurt anyone's feelings, because I think you can get a point across without being mean. And because “Crystal” is based off of me, I wanted to showcase how I really do handle things.

I love comedy so in each episode, the two ladies addresss an issue, but they “let it go” afterwards with a clearer understanding of who they both are and what is important to them. 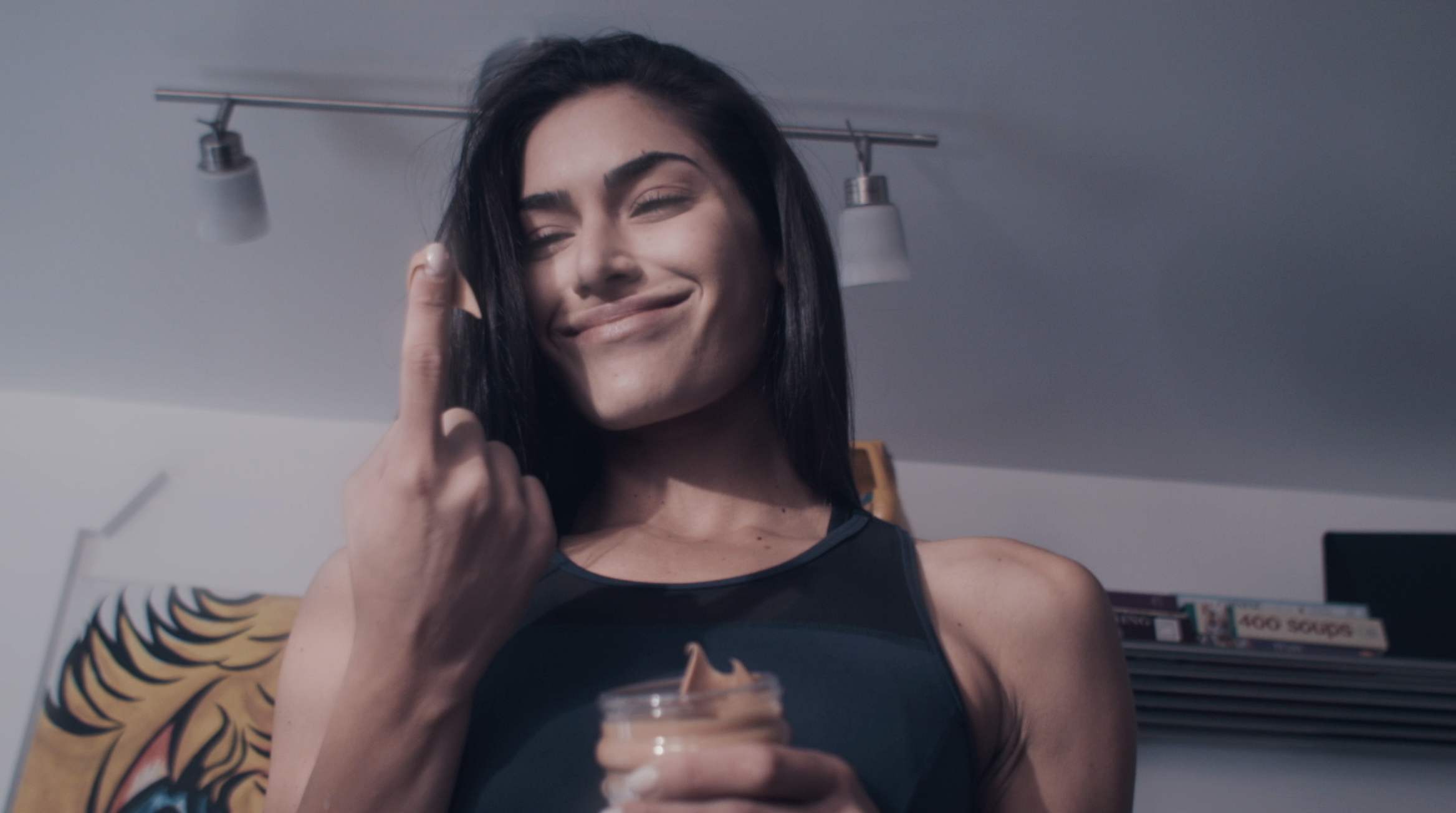 I know you've said in previous interviews that you keep receiving feedback to show Crystal alone more. Do you have plans to do that in subsequent episodes?

I do. I have written more web series episodes and a pilot version of “Crystal” which both show more of Crystal “on her way." It’s hard for me to have a show without others in it because I have so many “characters” in my life and I think I have to keep it true to my life in some way. But I did want to show Crystal independently more.

What challenges have you faced while promoting the web series?

I was worried about how to market the show so that people would know it was “funny." I spent a couple of months figuring out what fonts worked best and clips. Screenshots. Tbh, it’s a matter of finding the time and energy to keep up with all the social media outlets that gets hard.

But now that all the episodes are out I can go back and make new posters for each episode with funny taglines to keep reaching new people.

It’s been fun overall coming up with new ways to see the story. I am hoping to do a “sit-down” with me so I can talk about each episode from my view a bit more. Again, finding the time is hard!

Did you go to school for film production? If not, how did you get into it?

I didn’t, but I do have a degree in computer science and I have always been able to pick up and learn things quickly.

I have been an artist all my life - my parents always encouraged me to express myself. So I wanted to take it up some levels and get into film. 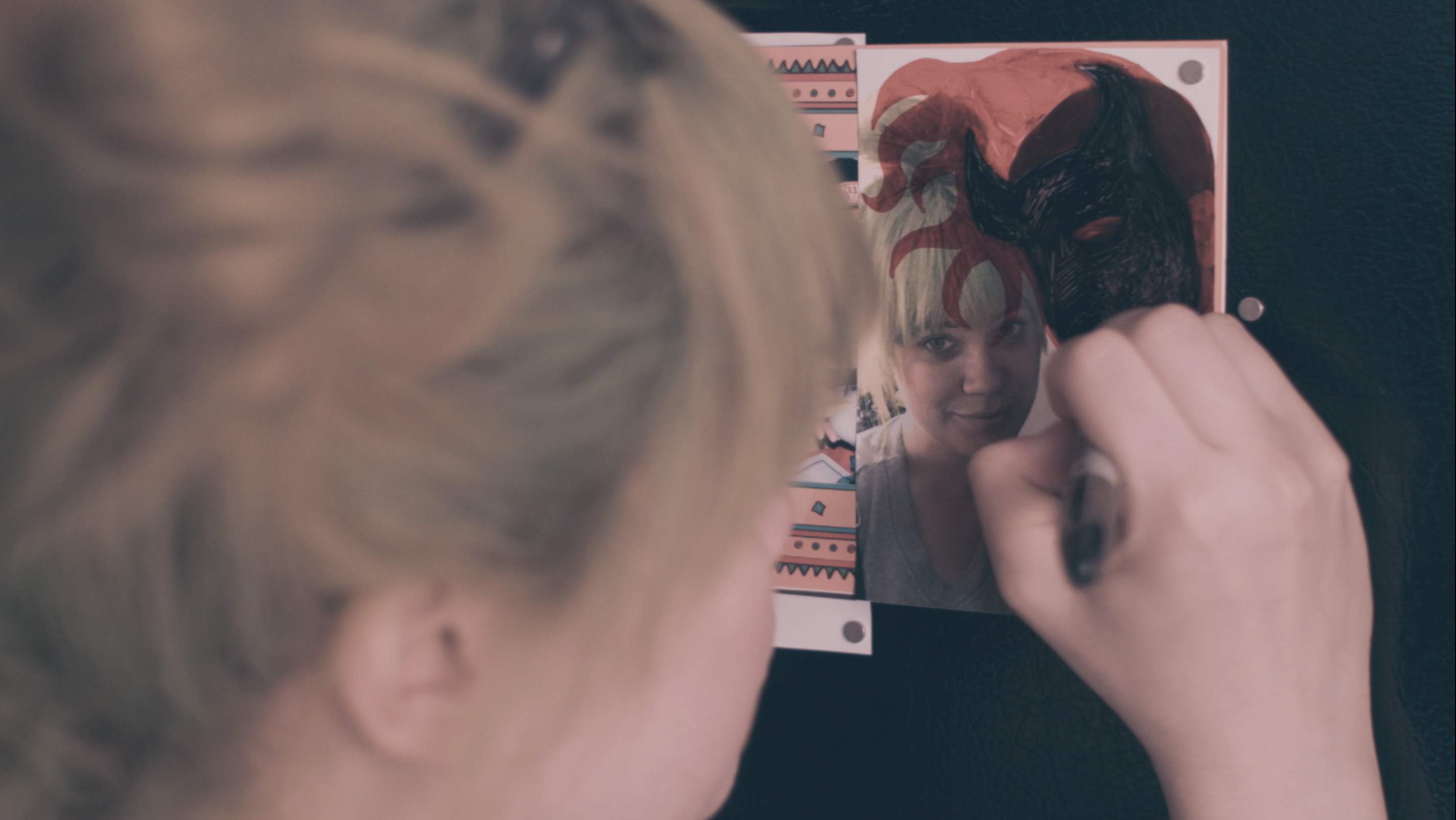 Crystal "fixes" a picture of her and her ex-boyfriend.

What are the best and worst things about living in LA? Are there any spots in particular that you would recommend to a visitor?

LA can be very fast-paced. Everything you need is here to create your projects but at the same time some things you have to grow into and wait on. It’s not the worst thing but having patience can be hard. I still have to learn to relax during Mercury Retrograde, which is the worst time to do business or anything new and it’s very obvious something is up in LA during that time!

But LA is always inspiring. I love Echo Park, the area where I work. My day job is as a stylist at Neighborhood Salon. I rent a chair by a local Echo Park chick and she’s awesome. It’s nice to just spend the day in that area and walk up and down all the shops, eateries and the Echo Park Lake!

Here are some of my favorite spots in that area:

I also love LACMA and The Getty Center, which I was able to see from my first studio apartment in East Hollywood.

Little Tokyo is adorable, too. I always have the best time at Kura Revolving Sushi Bar.

Close to Little Tokyo is Chinatown where my FAVORITE place to eat, Howlin Ray's, is located. Get the Fried Chicken Sandwich.

This city has the best food and pop-up shops going on so you can get inspired so easily.

If you had a weekend to do nothing but chill on the couch and binge one tv show, which one would you choose?

Cooking shows are my weakness and when you add bitterness to the mix ... I LOVE. I can't get enough of “Cutthroat Kitchen." And of course there's "RHOA" and "RHOBH" on Bravo. Those women have the funniest comebacks.

What's the story behind Crystal's green hair? It's very Enid Coleslaw in the best possible way. 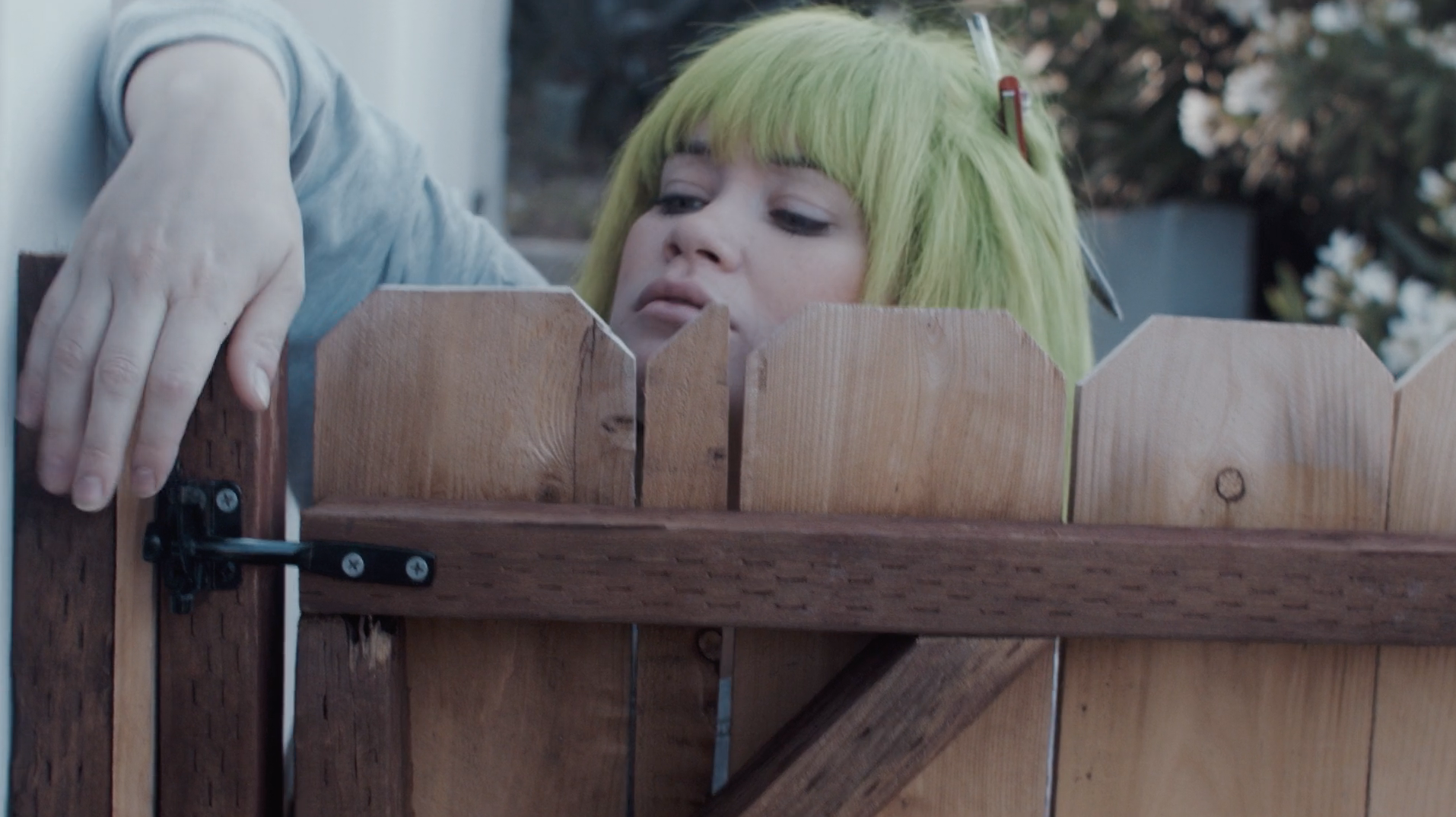 Oh, thank you. The green hair was inspired by the time I accidentally turned my blonde hair neon green. I wanted a baby yellow color - like sunshine - and ended up in the weeds, literally.

The funny part was how I tried to play it like it was on purpose by putting flowers in my hair and saying it was my “garden." It was a good thing my boss had a sense of humor and I got to keep it for a while until I went back to dark.

Because “Crystal” is based off my 20s I want to pay tribute to that moment. It was the first time I started to feel like an artist for a long time and in “Crystal," she is trying to figure out her next move - on her own terms.

What's next for "Crystal"? Do you have plans to put together a longer pilot episode?

I finished writing the pilot and now I am going to keep trying to reach out to get people to check out the first season of “Crystal” before we decide on the next step. I love the character - it’s all about “self-love” right? Ha. But mostly because I plan on bringing more people into the mix and making the stories crazier. I can’t help but put people in funny situations because that’s life.

Thanks for chatting, Crystal! I'm stoked to see what you do next 🌈. 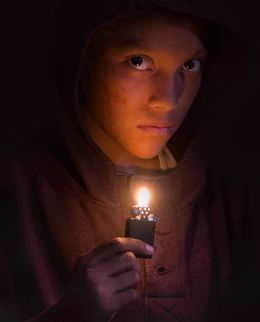 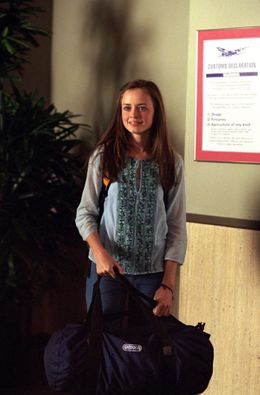