I was in 7th grade English class with Mrs. Blackburn on 9/11. After another teacher came into the room and whispered in her ear, she turned on the TV and frankly explained to us what was happening. Mrs. Blackburn was a no-nonsense bitch, which I always appreciated. I don't remember exactly how I felt in the moment, but I know that it was disorienting to see so many adults clearly afraid. There was talk of parents coming to pick up students and take them home for the day. I don't remember if my mom took this route; all I remember is uneasy confusion.

You might recall that when George W. Bush received news of the attacks, he was also sitting in a classroom. The school was Emma E. Booker Elementary in Sarasota, Florida, and Bush was there to promote No Child Left Behind. Kay Daniels' second grade students had tremendously improved their FCAT test scores and Bush was there to celebrate with them over Siegfried "Zig" Engelmann's "The Pet Goat" (1995). Bush didn't jump up and rush out of the room upon hearing the news; he remained seated with the book in his hands, staring blankly and holding clear tension in his mouth. He later said, "I didn't want to rattle the kids. I wanted to project a sense of calm."

If you've ever wondered about those second grade kids – how they interpreted the events of the day and what they're doing now – Elizabeth St. Philip's documentary, "9/11 Kids" (2020), streaming online now as part of Doc NYC, is something you should watch. Philip, a senior producer at CTV National News, is a lovely, warm person who clearly has a knack for finding untold stories that deserve to be heard. Read on for our discussion about childhood trauma, introverts in documentary, and the power of good teachers.‌

Woman in Revolt: I love how you took 9/11, an event that has been frequently dissected over the years, and found a new angle on it ... something that had been largely ignored until you brought it to light.

Elizabeth St. Philip: I have to say that the concept for the film came from my co-producer, Steve Gamester. He works for Saloon Media and is the one who asked me to direct and co-produce this. It's an interesting concept. 9/11 was such a tragic day. I remember where I was when it happened and seeing President Bush with those kids. To think that it's almost 20 years later when we're checking in with them is surreal.‌

The DJ, Uncle Ronnie, was a nice through-line in the film. How did you find him?‌

Uncle Ronnie came to us through a young man, Stevenson, who we initially thought was going to be in the film. He is the son of the late principal, Gwendolyn Tose-Rigell. We were talking to him about his experiences of 9/11 and he mentioned that he was trying to get into radio and that this guy, Uncle Ronnie, was helping him out. We went to film with him and met Uncle Ronnie (which is what he wants people to call him). He was just such a character. He's so alive on air and had a lot of insights on America and what happened to the country since 9/11. He was interested in the kids and what their stories represent. When we met him, talked, and saw him on camera, we knew we had to have him in the film.

But also, it was important for us that the kids told their own stories. We didn't want an outside narrator talking over them, so it made sense to have Uncle Ronnie provide that voice and through-line, especially since he's part of the community. He helped tie together all the different stories.‌

He always had smart things to say and I found myself looking forward to his next pop-up.

Uncle Ronnie would be thrilled to hear you say that.

One thing I always think about while watching documentaries like this is how hard it must be for a filmmaker to get subjects to exhibit vulnerability. In your case, the people in this film were in the media briefly as kids, but not as adults. How did you get them to trust you?

It just took time [for them to open up]. Our first meeting with everyone went well, but each time we went back, we got more and more. Allowing them to talk freely, asking questions without judgment, and showing interest in their perspective helped. The fact that no one had ever asked them to tell their stories ... there had been some news coverage here and there around the time of the anniversary, but no one had ever sat with them and asked about who they were as people, what their lives are like now, and what they think about America. I think they appreciated the opportunity.

Did the students talk to you about how much teacher Kay Daniels meant to them? I don't recall many specific statements in the film, but it's very clear that she is important to everyone.

Many of them referred to Kay Daniels as a mother figure. Some remember her singing a song on that day. They were so young and this was the first time that most of them were hearing about things like death and terrorists. She comforted them on that day and instilled this message that no matter what happens, you can get through it if you're strong. She referred to all of the kids as "her babies" and she actually kept in touch with them over the years. She was definitely the heart and soul of the film because she was the adult in the room when it happened. She was the one to take us through the events, to explain what happened with the president and how the kids reacted. [The responsibility] was on her shoulders to make sure that the kids were okay.

She's quite an extraordinary woman. Meeting her was a highlight of my career, and I'm not exaggerating!

Kay Daniels was such a calming force on that day, especially when things escalated. I didn't realize that George W. Bush gave his press conference at the school with all of the kids present. I can imagine how disorienting that would be for them.

They're just little kids and hearing about this devastating attack at school. All of the adults in their lives are scared. It's extraordinary.

I know that kids are resilient, but it made me think about whether this caused lasting trauma for anyone.

It's interesting ... in some ways, I think they were saved by the fact that they were so young. Before tragedy struck, it was a good day for them. They had vivid memories of how exciting it was. They felt like stars, like the paparazzi were coming for them. Even though they knew that something bad happened, I don't think it traumatized them. And again, I think that Kay Daniels protected them by comforting them and making everything feel okay. They know that they'll be tied together for the rest of their lives to that day, but I don't get the sense that they're haunted by it.

‌That is the perfect example of why teachers are so important and should be valued more.

Steve and I found that every time we talked with students, no matter what their circumstances – they could be dealing with making ends meet or facing incarceration – each one of them were incredibly optimistic, which sounds surprising. They really believed in themselves and their futures. I attribute all of that to Kay Daniels because that is the message she instilled on that day and throughout their lives. No matter how hard life gets, she taught them to hold on for a better day and keep believing that there's a brighter future out there. They  internalized that message and I think it comes out at the end of the film.

I know that you recently rolled out a scholarship for students who attended Emma E. Booker Elementary, Booker Middle School and Booker High School. Can you tell me more about that?

Steve Gamester and I wanted to find some way to give back to the school and contribute to the idea that education is so important. Gwendolyn Tose-Rigell was the one who brought President Bush to the school. It seemed like something totally unachievable that she somehow made happen. She wanted to do that to celebrate the excellence of the best readers in the county. We wanted to keep that going. We won an award at another film festival, Hot Docs, and we're putting that money toward starting the scholarship. I feel honored to be able to give back like that. We hope that other people also contribute and help support this wonderful school.

Another thing this film made me think about is how annoying it is to hear people say that millennials are idiots who don't know how to function as adults. Millennials are survivors! From 9/11 on, it has been bad for us. Maintaining a positive mentality through all of that is very important.

Millennials, especially these kids, are incredibly strong people, no matter what they're facing. They have an incredible work ethic, also. Even Dinasty, who is probably one of the most successful figures in the film, was hustling and making six figures by using her smarts and the Internet to build a business (and helping other people do the same thing). All of them, even the ones who aren't as financially successful, are fierce. Millennials get a bad rap when if anything, it's the older generations that need to make changes.

‌I was reading an interview with you in Women and Hollywood where you mentioned a professor in college who told you that you were "too shy and sensitive," which is annoying criticism. Do you identify as an introvert? If yes, I'm curious about how those tendencies have affected you -- positively or negatively -- in your career?

I am definitely an introvert and a very shy person. I have to push myself hard to be a director and producer because it requires me to get out of my shell. My shyness is something of a gift because I feel like it helps me connect with people who are vulnerable. I can see that they're vulnerable and I think my sensitivity helps me connect and makes them feel safer and more willing to share.

I'm an introvert, too, and feel annoyed that society often dismisses us. We are incredibly observant and emotionally intuitive, which are skills that translate well to documentary filmmaking. I'm sure that people feel comfortable with you because they can tell that you're actually listening to them when they talk.

If you're interested in donating to the Emma E. Booker Scholarship fund, you can do that here via the scholarship partner, Take Stock in Children, a Sarasota County, Florida-based non-profit organization.

Canadians can watch "9/11 Kids" on CBC Gem and people in the US can catch it through November 19 at Doc NYC. For updates on the film, check out the Saloon Media website. 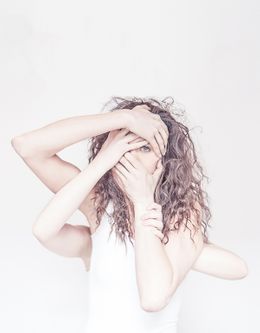