'Gilmore Girls' Season 4, Episode 11: In the Clamor and the Clangor 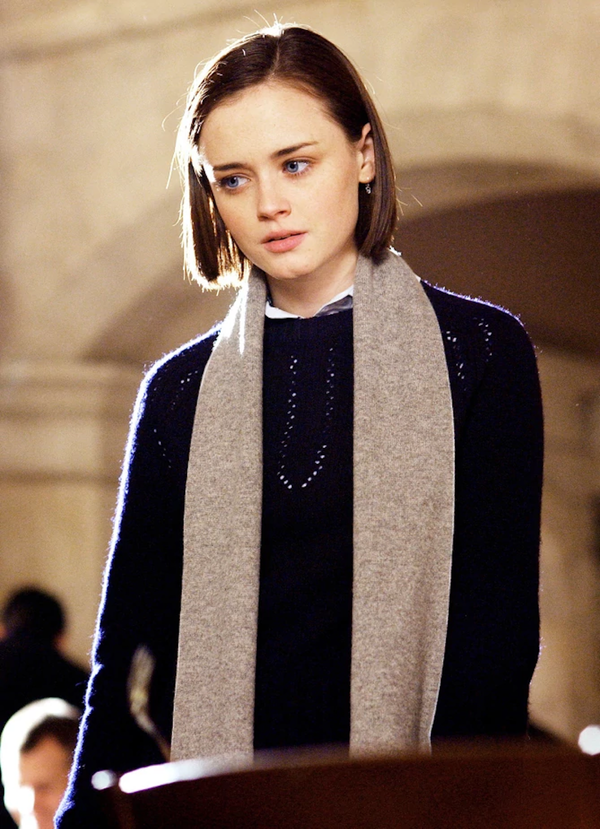 Directing and writing credits:
"In the Clamor and the Clangor" is directed by Michael Grossman, written by Sheila R. Lawrence and Janet Leahy. I'm surprised that Grossman didn't direct more episodes of "GG" - this is his only one - because it totally fits with his resume of teen shows that I used to watch and love ("Buffy the Vampire Slayer," "Pretty Little Liars," "Gossip Girl").

Lawrence has worked with the Palladinos for a long time and written several previous episodes:

Presenting Lorelai Gilmore - Everyone attends a cotillion and I'm once again reminded that no matter how lovely Stars Hollow seems, it is indeed in fucking Connecticut.
There's the Rub - Two words: vicious trollop.
Let the Games Begin - Jess almost sets the town of Stars Hollow ablaze with his gas pump cigarette.
That'll Do Pig - Jess and Dean whip out their dicks and fight with them at the Stars Hollow High carnival.

This is Leahy's third writing credit:
Lorelai Out of Water - Gf graces us with the most hideously overcooked fishing outfit I've ever seen.
Say Goodnight, Gracie - Jess' dad shows up in Stars Hollow, Dave reads the Bible cover-to-cover in one night, and Dean gets engaged to Lindsay.

Most batshit crazy outfit:
Just when I thought it couldn't get worse than Lorelai's funeral beret ...

Most irritating Rory or Lorelai moment:
It's definitely weird for Luke to move to Litchfield without ever mentioning it to Lorelai but her reaction to the news is out of control. Just tell Luke you want to have sex with him and let's get past this high school nonsense. Lorelai's angry that Luke has changed zip codes but still hasn't even mentioned that she's dating Jason. Lorelai tells Luke nothing about her romantic life yet expects him to share every damn detail.

Number of times Rory or Lorelai treat their bff like shit:
Zero. Lorelai whines to Sookie about her Luke issues in a way that is mostly tolerable. Lane deals with a bunch of family drama and Rory is a legitimately supportive friend. She does call Lorelai when Lane shows up at her dorm room unexpectedly at 4AM but I can't really fault her for this. Rory knows Mrs. Kim and understands how worried she's going to be when she figures out Lane's missing. I probably wouldn't know what to do in that situation, either.

Best literary or pop culture references:
Gil's Von Dutch shirt completely transports me to the early 2000s. I remember wanting one of those dumb trucker hats so badly (my mom firmly denied me).

Stars Hollow weirdness:
After observing that Stars Hollow deaths usually come in fives, Lorelai, Rory, and Sookie realize that there have only been four this year: Pinochle Downs, Mr. Angelotopolous, Mrs. Krenz, and Stan. They wonder about who the fifth person might be and each person they name has a minor incident within seconds. Hank Krutzman falls and Kirk screams, "Going dark, going dark" as he runs into a flower display. Lorelai muses that they're "the Witches of Eastwick." If this is true, I wonder why they don't use their powers to immediately kill Taylor.

Another interesting tidbit is that everyone hates the newly restored church bells (thanks, Stan!) and Kirk develops a case of tinnitus, an affliction he apparently shares with William Shatner.

Sharpest insult or one-liner:
In the midst of Lane's Adventist college meeting (featuring Rami Malek!), Rory shows up and asks to borrow a "book" (really a CD). As soon as they're upstairs in Lane's room, they discuss the students:

Rory: So, it's quite a lively bunch you got down there.
Lane: Oh yeah, I'm kind of worried, all of those breakables.

Books mentioned/books Rory is reading:
Rory mentions "The Bell Jar" but doesn't read shit. Is this bitch still studying journalism at Yale or ...?

Best song of the episode:
I actually enjoy Hep Alien's cover of "Crazy Beat" but Zack's not-so-subtle digs at Gil are rage-inducing. Zack is clearly pissed at Lane for letting Gil into the band but doesn't want to look weak, so he's misdirecting his irritation. He tells her, "Hey, we all let him in, we're a democracy." Sure, Jan.

Thoughts:
I refuse to believe that some random named Stan was so popular around town that our core cast of characters are moved to tears at his funeral. Lorelai and Rory didn't even cry at Fran's funeral, for fuck's sake! All we know about Stan is that he was Jewish, hated mushrooms, and made the first lunch reservation at the Dragonfly Inn (which admittedly, is very sweet).

I also like that Stan decided to bequeath the funds to restore the Stars Hollow church bells upon his demise. In theory, this is a nice gift that benefits the entire community. Of course, the bells end up driving everyone, even little Davey, bananas, but how could Stan have possibly predicted this? Maybe Stan did predict this. Perhaps he's a diabolical genius, fucking with the entire town from the grave, and deserving of every tear.

Rory and Lorelai both have relatively self-involved storylines this episode (what else is new). Remember William, the Smiths laundry basket dude who turned Rory down when she asked him out on a date? Apparently, he's been going around campus telling stories about a girl (his "adoring fan") who won't stop asking him out and follows him everywhere. Rory, who just ran into him at the International Relations Association, is convinced that he's talking about her.

Honestly, I don't blame her for thinking this. College kids, especially dudes, can be immature assholes who blow up minor situations in order to make themselves sound more interesting. After a few tense interactions, Rory finally confronts him and finds out that he was actually talking about someone else.

She obviously feels dumb, but at least she had a relatively healthy conflict with someone for once in her life. The fact that it took an especially cringey debate over the Israeli-Palestinian conflict to expedite it brought me back to my college days. Although it may not always seem like it, life is much better as an adult. Do I miss sleeping in until 10A, running every day with my friends, and having every meal prepared for me? Yes. Do I miss being the type of idiot who argues that "the whole Israeli-Palestinian problem [is] a case of sibling rivalry?" Not even a little bit.

While Rory deals with her college drama, Lorelai is busy directing her most passive-aggressive energy toward Luke after he casually mentions his new apartment. Even though this happened three weeks ago and absolutely nothing has changed, Lorelai is still flummoxed. How dare Luke make a decision about his life without first consulting her 🙄

After pissing him off, Lorelai's peace offering is a suggestion that they break the bells together. Luke is no stranger to bell destruction (he's the one who put them out of commission the first time), so he's game. When they step into his apartment to grab some tools, Lorelai notices that it still looks very much occupied - dishes are in the sink, the bed is unmade, etc. Later, after they've broken into the church, Lorelai confronts him about this and there is a tense moment between them where and it feels like the conversation is on the precipice of some truth.

Luke: Nothing's changed! I still see you every day, I still cook your food, I still serve your coffee. What do you care?
Lorelai: I care.
Luke: Why?
Lorelai: Because I don't want you to move.
Luke: Why? Why don't you want me to move?

Reverend Skinner comes in, diffuses the tension, and the moment slips away. If his appearance had been delayed even 30 seconds, Lorelai might have finally admitted that she has the hots for Luke.

Other important developments this episode involve Lane and Mrs. Kim. After Gil procures the band a gig at CBGB on Tuesday night at 1AM, Lane starts brainstorming potential excuses she can use with her mom. Rory gives her a few suggestions (sleeping over at Yale, attending an astronomy class) but shit is very limited in the Mrs. Kim universe (Yale is co-ed, astronomy class implies that the universe is old). When Lane fails to think of a good excuse, she sneaks out of her house. The gig ends up getting cancelled because the venue is empty and Lane, in a straight panic, heads to Rory's dorm for lack of other options.

Rory calls Lorelai, who then calls Mrs. Kim and informs her of Lane's absence. Of course, Mrs. Kim already knows (her house is full of people praying with candles). The most heartbreaking moment is when Mrs. Kim, on her way to Yale, realizes that Lane shared her plans for the night with everyone but her. Lorelai knows, Luke knows, but Mrs. Kim? Totally in the dark. After speaking to Luke, Mrs. Kim turns around instead of completing the drive to Yale. After Lane takes the bus back to Stars Hollow the next day, she and her mom finally have a confrontation amongst all of her hidden contraband (Mrs. Kim searched her room).

Lane: I don't want to go to Seventh Day Adventist College anymore. I want to be able to play with my band. I want to be a drummer. I will happily go to community college, and I will happily live at home and adhere to your curfew, except on the nights when the band plays or practices. This way, I can get what I want, and I won't be lying to you or sneaking around. This way we can both be happy.
Mrs. Kim: Children do not make the rules. You may ... move out and live like that somewhere else.

I very badly want to go on a diatribe about how religion is evil and ruins everything but I'm trying to be a more tolerant person. Instead, I will simply say that the situation sucks.