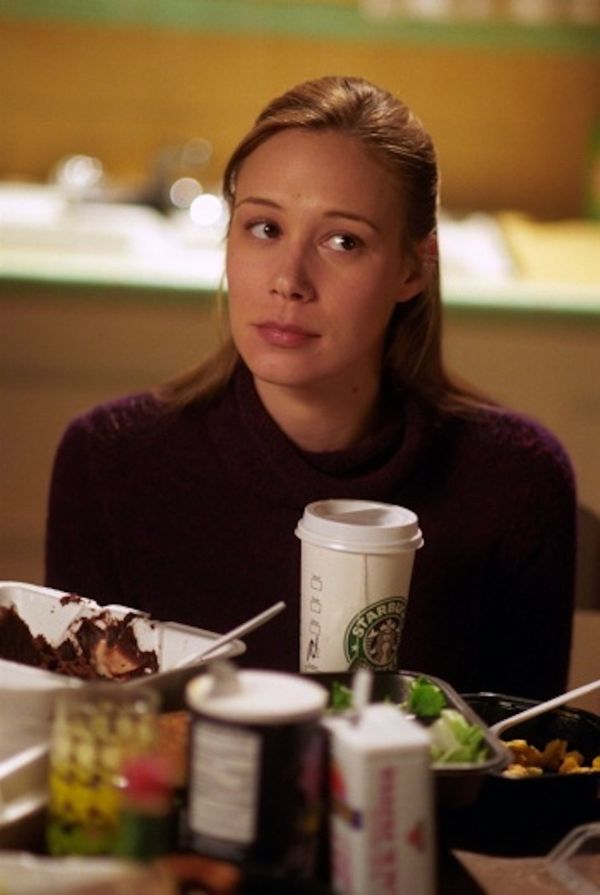 Directing and writing credits:
Directed by Amy Sherman-Palladino, written by Sheila R. Lawrence. ASP has actually only directed fifteen episodes of the original "Gilmore Girls," which kind of surprises me. In a 2013 Collider interview about "Bunheads," ASP was asked how she decides which episodes to direct. This was her response:

"I always direct the first and last episodes. That’s what I did on Gilmore Girls, and that’s what I do on Bunheads. It’s important that I set the tone for whatever it is, and I always want to wrap it up, at the end. Because we only did eight episodes in this block, I only directed two. When we did the season of Gilmore Girls where we were going to have the 100th episode, I was like, “I’m directing that!” So, it’s good to be queen. It’s nice to be able to sit there and go, “That’s a story I feel very strongly about.”

Throughout the course of the series, there are a few anomalies. "There's the Rub," "Here Comes the Son," "The Prodigal Daughter Returns," and "I Get a Sidekick Out of You" are all outlier episodes. I'll talk about why I think ASP chose to direct them in each subsequent review.

Sheila R. Lawrence also wrote "Presenting Lorelai Gilmore" and will go on to write four other episodes. She works as a producer on the show through the end of Season 4 and is a frequent Sherman-Palladino collaborator.

Most batshit crazy outfit:
Shockingly, there aren't really any brutally offensive outfits in this episode. Lorelai's "Yoga Kills" shirt is ugly, but also kind of funny, and she doesn't wear it outside of the house, so I think it's unfair to judge. 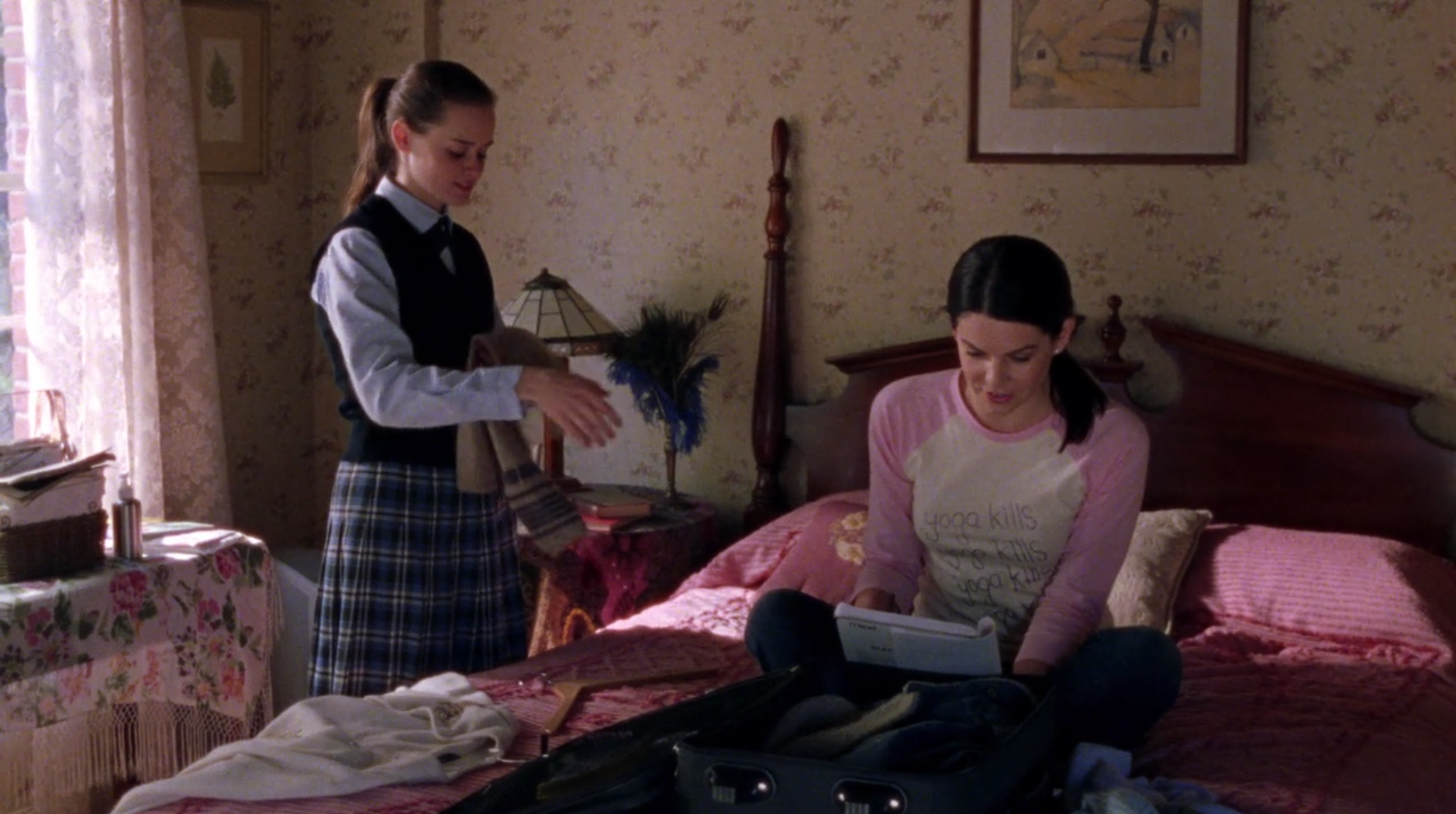 Rory wears a Mr. Peanut pajama set for her big night of laundry and Indian food, but again ... house clothes should be off-limits. If someone judged me on what I wore to bed or even to work from home, I would be ashamed. Almost all of my sweatpants have holes and my graphic t-shirt collection is extensive.

Most irritating Rory or Lorelai moment:
Both of our gals are pretty fucking annoying in this episode. Lorelai is a total dick to Emily at the spa and Rory's whole, "tee-hee, Jess does not like me" schtick is starting to wear on me.

Number of times Rory or Lorelai treat their bff like shit:
Seriously, where are Lane and Sookie?

Best literary or pop culture references:
Rory: I almost never get the house all to myself and I thought with my mom gone, I can finally do my laundry exactly the way I like it. You know, not just separated into whites and colors, but the colors separated into darks, mediums, and lights, with a separate pile for white t-shirts and t-shirts with some kind of writing on them, like, you know, "Rock Star," "Evil," or "Kafka was here."

I would never wear a "Rock Star" t-shirt, but I could definitely get down with the other two.

Stars Hollow weirdness:
Tom is busy renovating Luke's upstairs apartment, to the detriment of the diner below. 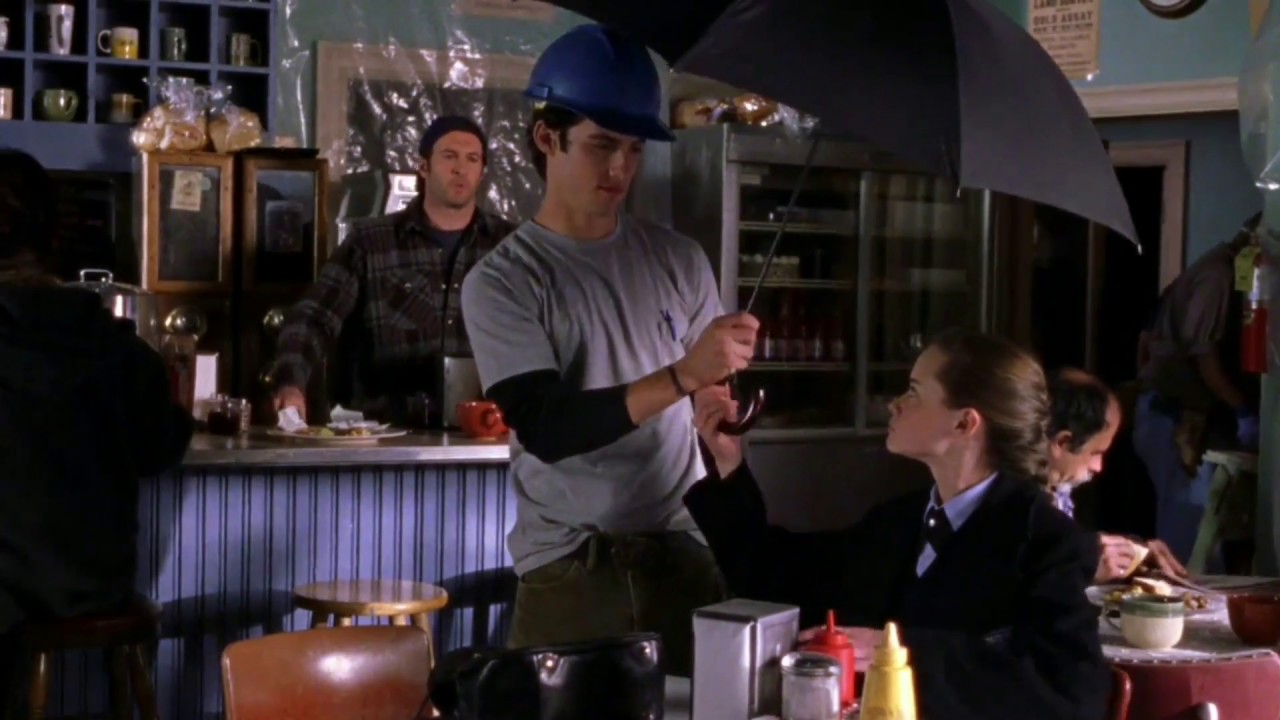 Books mentioned/books Rory is reading:
No specific books mentioned, but several authors were name-dropped: J.D. Salinger, Jack Kerouac, Charles Bukowski, and Jane Austen. The entire conversation between Paris and Jess is magic and I would 100% watch a spin-off show of those two ribbing each other and discussing books. 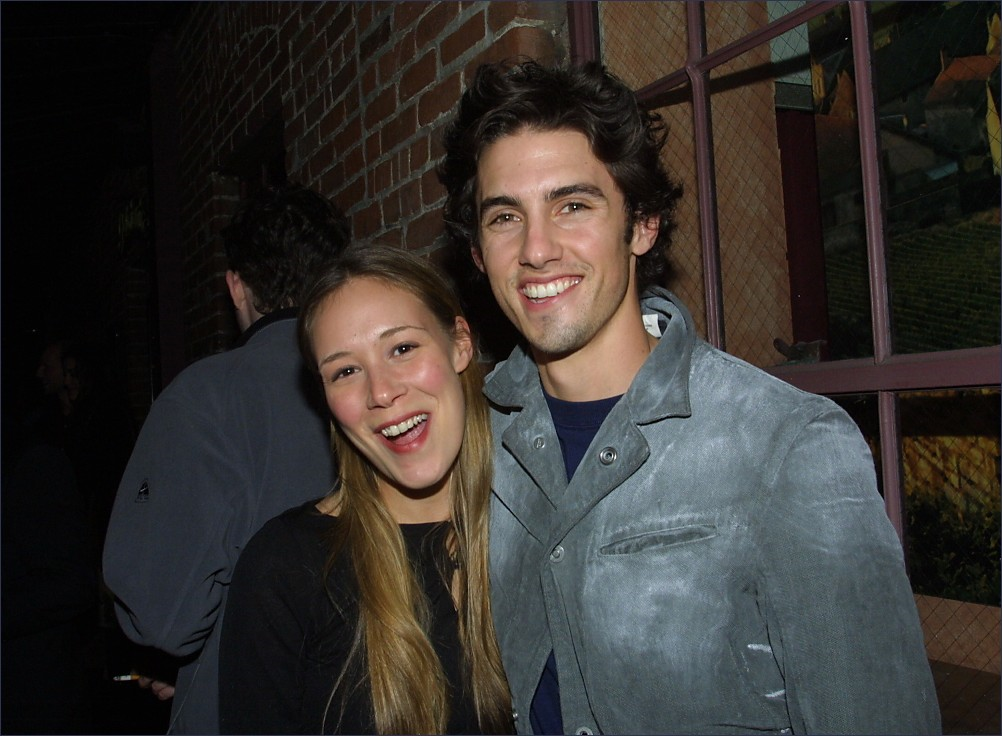 These two make a better couple than Rory and Jess, imo.

Oh, and the Internet says "Ulysses" is the book Jess reads at the end of the episode, but he's completely obscured by Luke in the shot and I honestly can't tell.

Best song of the episode:
The only songs we hear are at the sixty-forty bar where Lorelai and Emily have dinner. My favorite of the bunch is "Fly Me to the Moon," performed by Marty and Elayne, a famous lounge act in LA. They also make an appearance in Doug Liman's "Swingers."

Thoughts:
I die at David Sims's description of "Lost and Found" and "There's the Rub":

Jess has graduated from pleasant nuisance to full on sex hurricane and Dean is digging in for dear life, whining and grunting and glowering as best he can in the face of actual charisma.

I typically don't have any sympathy for Dean, but damn ... Rory has the house all to herself and she wants to do laundry instead of hanging out with him. HARSH. What she's really saying is that Dean no longer gives her lady boners and she only wants to spend time with him when it's 100% convenient for her. Instead of clearly stating any of this, because she's obviously in denial, she cloaks these feelings with lame excuses, so I can see why Dean tries to rationalize away her actions. Realistically, he knows she's pulling away, but she's not doing it in directly enough, so Dean continues to think there's a chance he can hold onto her. 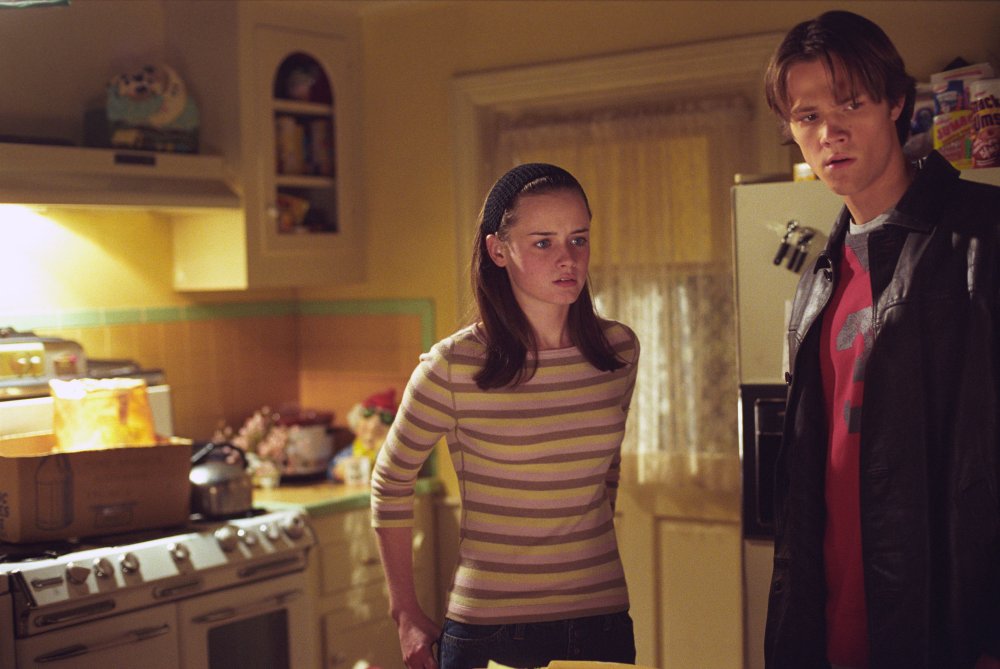 Poor, sad, ice cream-touting Dean. Paris does not like Jess, you fool.

Young Lindsay has been there and she understands Dean's pathetic desperation. When I was a senior in college, I was driving home from a Dr. Dog concert when a deer ran into the passenger side of my car. I slammed on the brakes, fishtailed off the road, and hit a telphone pole. My car was totalled and I was stranded in the middle of nowhere on a creepy road somewhere between Slippery Rock and Meadville, PA. While I was waited for the police to arrive, I called the dude I was sleeping with at the time (not my boyfriend, but a sort of... old boyfriend who lapsed into a string of idiotic mistakes) and told him what happened, explaining that I might need him to come pick me up because I wasn't sure how I was going to get home.

After dealing with the dead deer (RIP) and my sad, mangled car, I called him back to see if he could give me a ride home, but he didn't answer. I called at least ten times, but no dice. He claims he fell asleep and didn't hear the phone rang, but I knew in my heart what was really happening: he gave zero fucks about me. But did I keep sleeping with him? Yes. Did I let him gradually treat me worse and worse until the relationship nearly became abusive? Yes. So we've all been there, Dean. When you're young and in love, you will probably do some really stupid shit.

I love when Paris covers for Rory and pretends to like Jess so that Dean will stop rage-spiraling. Paris doesn't even ask what the situation is, she simply reads the room and decides to help her friend. Paris is the absolute best and I consider this a turning-point for her. Going forward, Paris remains awesome (aside from that idiotic student government "treachery" plotline in Season 3) and continues to grow into a great friend and one of the best characters on the show.

While Rory, Dean, Paris, and Jess are dealing some some routine high school drama, Emily and Lorelai are at the spa. Watching this episode as a teenager, I'm pretty sure I felt that Lorelai was in the right. "Ugh, Emily is so annoying and Lorelai's grumpiness is justified" is probably what I thought. Watching it now, I agree with Emily: Lorelai is acting like "a petulant four-year-old." Not only is this spa trip free, it's a goddamn spa trip. Shut the fuck up, turn off your brain, and enjoy the robe and all of the expensive treatments you didn't have to pay for. After Emily decides to come with her, Lorelai's gratitude melts away and she never once says thank you for anything. 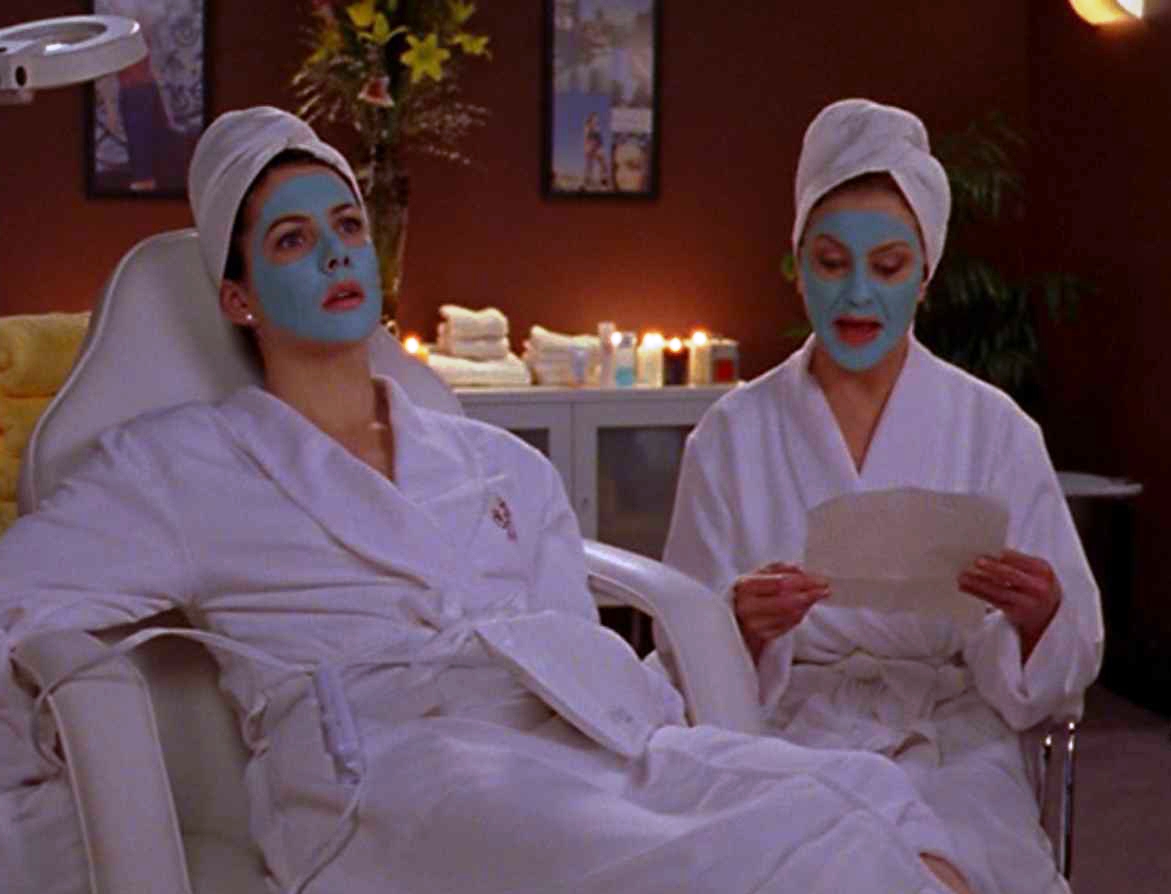 I would put up with some insane bullshit for a day at the spa.

Emily overreacts after the Chad incident at the bar, but up until that point, it's so nice to FINALLY see her and Lorelai have fun and enjoy each other's company. Those two make a nice team and even though the trip comes to a rocky end, we get to see a few cute moments and a delightful scene of mother-daughter thievery. And of course, we're introduced to the best lipstick name of all time: 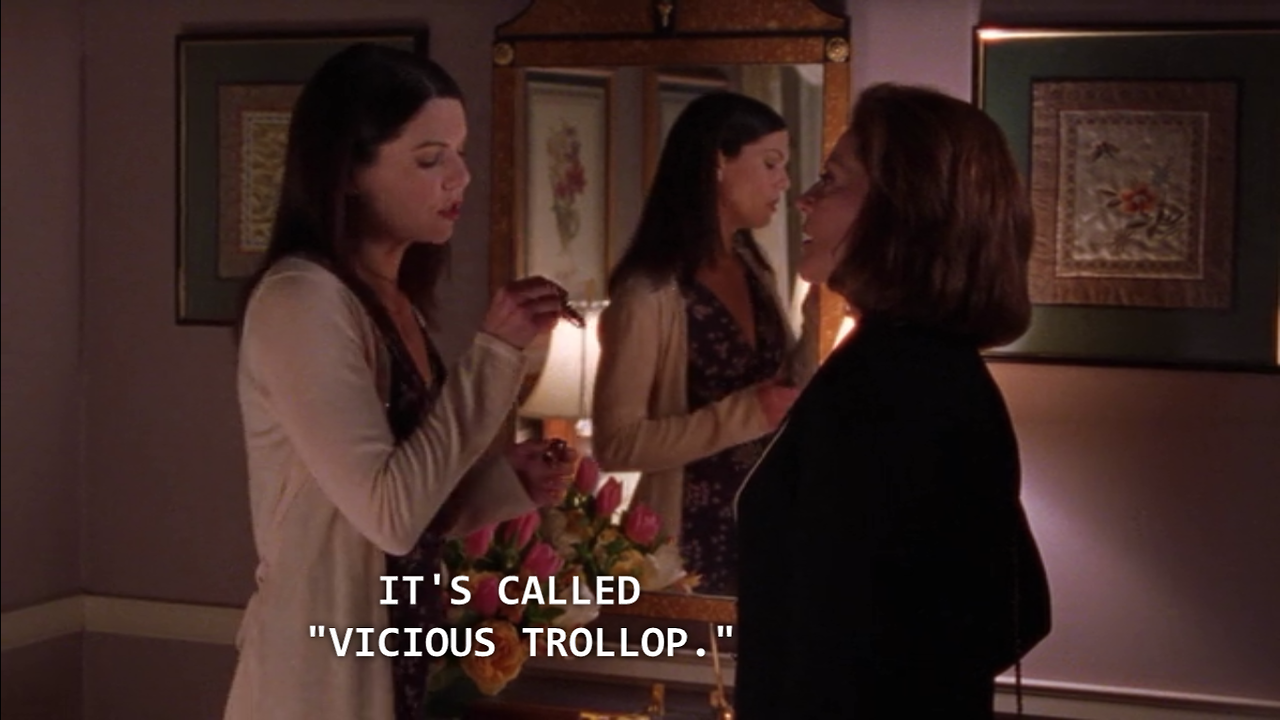 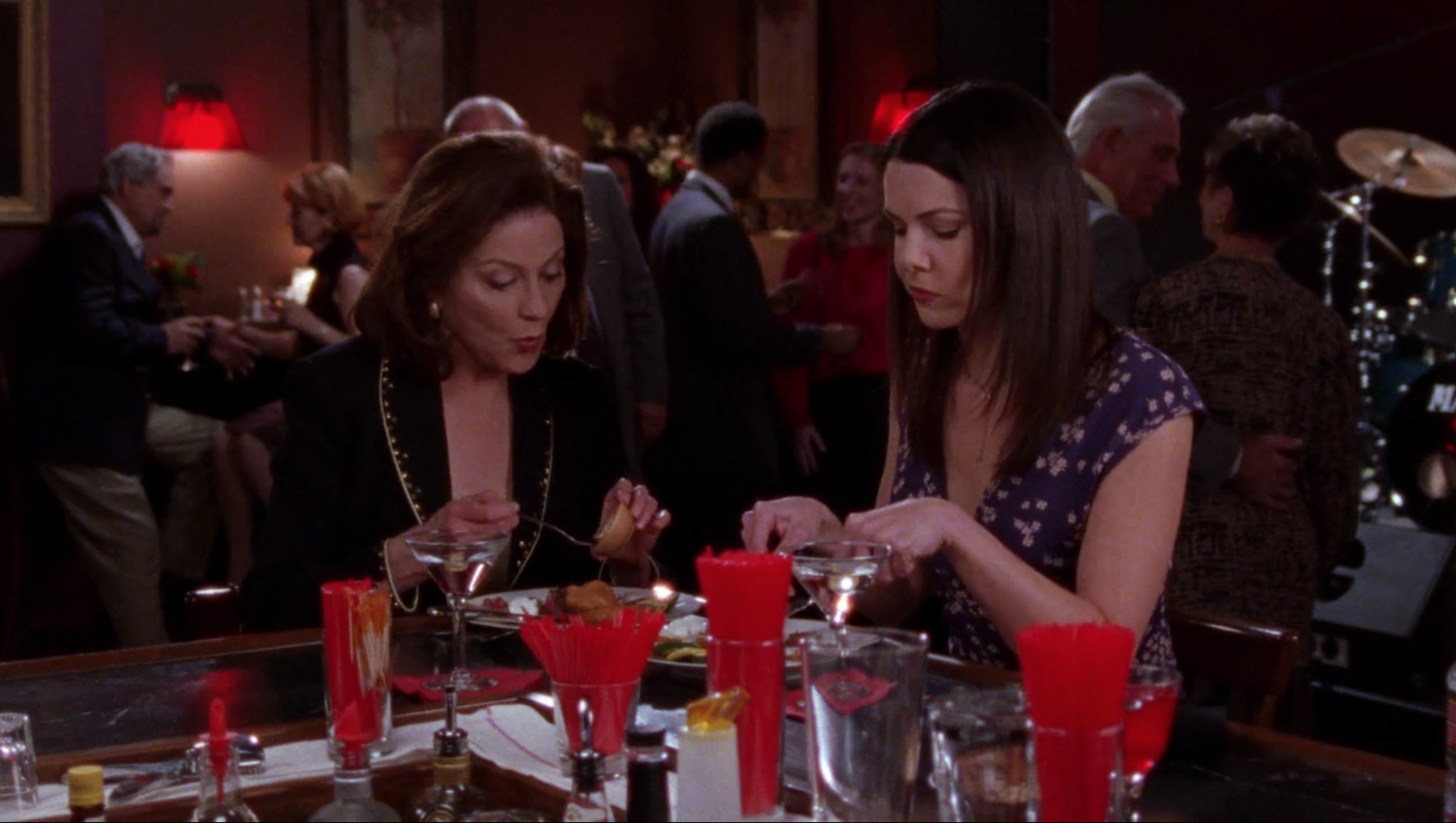