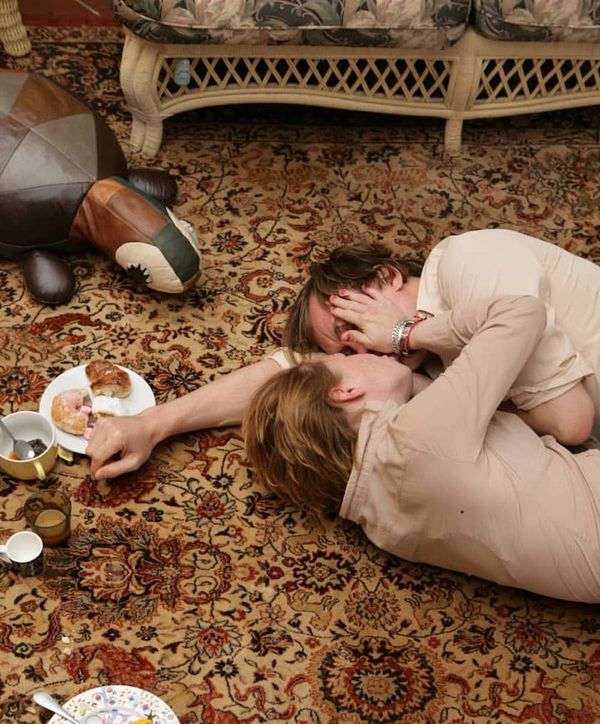 Vibe:
Unlike The Forest for the Trees, Everyone Else is visually beautiful. Shot on lush 35mm on location in Sardinia, this movie feels more expensive than Ade's debut, even though I'm sure the budgets were comparable.

If someone told me I could live in the world of this film, I would be pretty into the idea, but not if I had to hang out with Gitti (Birgit Minichmayr) and Chris (Lars Eidinger). I'm fascinated by Maren Ade because she manages to create complex, interesting characters that I absolutely loathe.

Best time to watch:
On a first date. The way your companion reacts to this movie will tell you everything you need to know about whether or not they're worthy of a second hang.

I used to love watching weird/uncomfortable movies on first dates. I once invited a dude to my dorm room sophomore year of college and made him watch Dogville. When he asked if he could kiss me as the whole town raped Grace (Nicole Kidman), I knew I would spend the rest of the year awkwardly avoiding him in our 8-person seminar class. (In his defense, I don't really think he was paying attention to the movie, which makes the whole thing less creepy, but just as unforgivable.)

Ideally, I would recommend watching this film in a group setting, with several couples who have vastly different relationship dynamics. I would love to get a queer take on Chris' masculinity issues and a new couple's perspective on the attic scene with Hans (Hans-Jochen Wagner) and Sana (Nicole Marischka).

Worst time to watch:
When you don't feel like reliving your awkward/terrible previous relationships. Everyone Else reminds me of a guy I met on Tinder and dated a few years ago.

I was super into him at first. He was smart, quirky, and adorably self-deprecating... a philosophy student at NYU who liked to run and grew up in the city. My friend Korey, who is a good judge of character, was immediately like, "he's attractive, but there's something deeply fucked up about him."

And she was right! He was totally a drug addict who routinely spent all night at EDM shows, slept through the entire day, and had actually finished his degree forever ago and was just unemployed and living off his trust fund. He was also a total dick. It took 3-4 hangs in the presence of other people before I realized that a) we were terrible together and b) he was a garbage human.

He also wore a lot of tank tops, which really should have made the character flaws obvious to me from the very beginning.

Where to watch:
Fandor or iTunes.

Quick summary:
A new couple go on vacation together and start to realize that they might be incompatible whenever they start spending time with another, more established couple.

Thoughts:
Have you ever been in a relationship that's going amazingly well until you introduce it to other people? Other people ruin/complicate everything. Hell is other people. But unfortunately, other people are impossible to avoid in modern society, and no relationship can or should exist in a vacuum.

In private, Chris and Gitti get along quite well. Of the two, she's the more traditionally "masculine" partner. She's confident and direct in her language (think about the way she treats Chris' niece at the beginning of the film), has short hair, and doesn't care to wear dresses. Chris, on the other hand, has more "feminine" qualities. He's passive, moody, and doesn't mind when Gitti puts blush and eyeliner on him (until he has to leave the villa and risk being seen by other beachgoers). Whenever they're alone, this dynamic works and they seem to have fun together.

When they leave the villa to go grocery shopping, these unconventional dynamics that they've grown so comfortable with no longer seem to feel right. Chris is a man, so he's supposed to be the confident one, dammit! He can't let his friend (frenemy?), Hans, see him as a nancy boy. As soon as Chris runs into Hans, a man he claims to not like/want to avoid, his whole attitude changes and his only concern becomes reinforcing his masculinity - both to Gitti and to his friends.

Whenever Gitti defends his work at dinner, Chris is embarrassed. He doesn't need his girlfriend to fight his battles for him, so he treats her like shit in front of everyone to put her in her place. Once Chris becomes cognizant of his previous, more feminine behavior, he never stops trying to correct it.

Even when they're hiking alone, Chris is needlessly mean and short with Gitti. He makes fun of her backpack, isn't grateful that she's been thoughtful enough to pack a picnic, won't admit that he's lost, and continues to walk ahead of her even after she's stated that she's tired and can't keep up with him.

As Chris continues to act like a textbook 1950's douchebag, Gitti's behavior also shifts. She's no longer so confident in herself or her relationship and starts to desperately cling to Chris. She tells him she wants to change to be better for him and that she's afraid of losing him. She keeps the dress he likes and wears it to the dinner party she hosts for Hans and Sana. Everyone commends her on her cooking and her dress; she is quiet and demure. It's all very fucking sad.

I should note that none of these dynamics were immediately obvious to me after a first watch. I definitely picked up on some of the gender issues, but the film is very subtle and difficult to define. In my mind, Chris and Gitti's relationship is a microcosm of society as a whole and Ade is primarily commenting on the way that other people change and shape our identities.

If I were a film professor, I would find a way to work Everyone Else into my curriculum. I would love to hear 18-year-old uninformed opinions about life and love. Ideally, I would teach a class called "Fucked Up Relationships in Film" where we watch and talk about the following:

All of these films are as much about life as they are about romantic relationships. Everyone Else stands out to me as the one most relevant in 2017. In a world where we constantly compare ourselves, not only to real, flesh and blood people, but images of them online, how do we come to terms with identity? This, I think, is the most interesting question that Ade poses and a great starting point for any philosophical conversation (especially in a film class).

If you're interested in reading more about this film, I highly recommend this Cinema Guild essay by Mark Peranson. His analysis of this film is the best I've read thus far.