Vibe:
Uncomfortable. "A Colony" brought me right back to high school and viscerally reminded me of how much I hated it. It's impossible not to connect with Mylia (Emilie Bierre) as she walks into a party and sees her classmates effortlessly socializing and having fun. Why isn't it like that for her? To offset some of those cringey scenes, Dulude-De Celles breaks the tension with Camille (Irlande Côté), Mylia's firecracker younger sister.

I place this movie in the same category as "Pariah" (2011). It's coming-of-age but skews more serious than films like "Lady Bird" (2017) or "The Edge of Seventeen" (2016). I laughed a handful of times (all because of Camille) but the comedic relief was brief.

Best time to watch:
I watched it yesterday after work at the beautiful Michigan Theater as part of the Nevertheless Film Festival. If you're in Ann Arbor, come hang out and screen excellent movies this weekend. Since "A Colony" is only showing at festivals and doesn't have a US distributor (afaik), you should seize any opportunity to see it.

Worst time to watch:
If you're a high school student struggling to fit in, this film might be triggering. Otherwise, no time is a bad time to watch.

Where to watch:
If you're in Canada, "A Colony" will be available to stream on iTunes starting Monday, July 15. A theatrical release is also slated for Sweden and the film will continue to show at international festivals throughout 2019. I wish I had better resources to direct you to, but the Internet isn't helping me out much. Let's hope for a US distribution deal.

Quick summary:
Mylia is a quiet girl who seems to feel ill at ease in most situations. Her new high school is full of loud, aggressive kids who make fun of each other and brag about sexual conquests (typical). After striking up a friendship with Jimmy, an indigenous boy who is also an outsider, her world slowly begins to change.

The next day, the friend confirmed that the slurping I heard was indeed some amateur dick sucking. I felt incredibly weird about the entire thing. Why wouldn't she ask me to leave first? Why wasn't I interested in sucking dicks yet? Was something wrong with me?

Like Mylia, I was one of those kids who never felt a strong sense of belonging. This isn't to say that I never did stupid shit for the sake of acceptance, but I was too self- aware to delude myself into thinking that I was "normal." When I made out with my 10th grade boyfriend on his bed and he tried to finger me, I remember thinking "yuck" and then saying "please, no." Friends encouraged me to let it happen but I knew it wasn't something that I actually wanted. As much as I may mourn my youth (RIP eating pizza for every meal and never gaining weight), I don't miss those awkward years as a member of the adolescent hive mind.

What I liked most about "A Colony" is that Dulude-De Celles doesn't spoonfeed us information; instead, she lets facial expressions and small gestures do most of the talking. This is a quiet movie that is light on plot but not insubstantial. Mylia and her family live in Pierreville, a town in the Quebec countryside that is near a First Nations Reserve. It's clear from the jump that her parents are going through some issues and might be headed for divorce.

Her dad (Robin Aubert) is absent after her first day of school and later, we see him sleeping on the couch. Her mom (Noémie Godin-Vigneau) seems downtrodden and maybe a little bored. There's mention of her previous life as a contemporary dancer, but we're told she has since retired to take care of her kids. Camille, Mylia's younger sister, is outgoing and bright, totally free of social inhibitions.

Aside from small details revealed in passing, we don't know much else about these characters. There is one scene that suggests Mylia was bullied at her old school and ostracized after her mother complained, but the specifics aren't discussed. Mylia's face and body language tell us more about her inner life than any other characters or dialogue.

On the first day of high school, she runs into the bathroom, locks the door, and breathes heavily. She doesn't know how to talk to other people at a party so she drinks too much punch, dances like a slight maniac, and weaves her way through the deserted streets before passing out in a public park. She's uncomfortable in social situations and she often tries to mitigate that feeling with destructive behavior. As someone with the same tendencies, I'm worried about what's going to happen to her when she goes to college.

Although it's realistic, I hate that a dude is the one to pull her out of her shell and make her realize that it's okay to be different. It would have been more satisfying to me if that discovery came from within. Jimmy (Jacob Whiteduck-Lavoie) is sweet and caring, but certainly not without issues. On the positive side, he spends time with Camille, likes animals (and Cesar Millan), and saves Mylia from the dangers of late night public intoxication. He understands what it's like to be an outsider and is coping with his own shit (dead mom, disdain from classmates) the best way he knows how – by "coloring over the lines."

Despite all of this, he's still a teenage moron. At one point, he uses a homophobic slur and lightly slut shames the girls in his class who use Halloween as an opportunity to wear scandalous outfits. As an adult, it's hard to see him as a viable romantic option for Mylia. I'm not even sure she deserves it, but I still want better for her.

At the end of the film, we're left with the impression that thanks to Jimmy, Mylia is in a good place and better equipped to deal with the hardships of high school and family drama. It might have taken a dude's attention and advice to get her there, but who cares? Mylia has plenty of time for self-discovery and autonomy.

Interview with Claire Edmondson on 'EXIT' 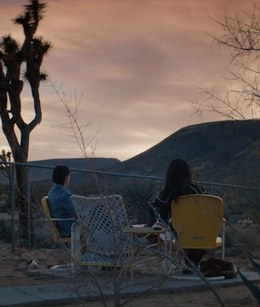