Vibe:
This quote sums up the vibe quite nicely:

My entire generation is a bunch of mouth breathers. They literally have a seizure if you take their phone away for a second, they can't communicate without emojis, and they actually think that the world wants to know that they are "eating a taco, exclamation point, smiley face, smiley face", like we give a fuck.

"The Edge of Seventeen" is a sharp, funny, bittersweet teen dramedy that dives headfirst into all the most cringe-inducing aspects of high school. It's like a John Hughes film without the racism, sexism, and sub-par screenplay. Nadine (Hailee Steinfeld) is an awkward, sarcastic killjoy who reminds me of myself in high school (and also now, tbh, although I think I'm a little more self-aware and less of an outright dick as an adult). At times, I had so much secondhand embarrassment that I had to pause the movie and pet my therapy cat for emotional support.

Remember in high school when something "bad" happened and you thought it was the end of the world? Like when your boyfriend broke up with you because you kept changing your mind about your favorite Red Hot Chili Peppers song and he wanted to be with someone who knew for sure? Or when your parents wouldn't let you take out $80,000 in undergraduate loans so you could go to Carnegie Mellon? Those were the days...

Worst time to watch:
When you're not in the mood for some teenager's bullshit problems. As much as it might suck to be young and stupid, it sucks even more to be old and have firsthand knowledge of all the different ways life can spit in your face and fuck up your plans.

Granted, Nadine's problems are a little more serious than most high schoolers. Dealing with the death of a parent would be rough at any age, but particularly difficult to cope with during adolescence. And the situation is certainly worsened by the fact that Nadine's remaining parent (her mom, played by Kyra Sedgwick) is barely capable of taking care of herself, let alone her children. So even though Nadine is kind of a deluded asshole most of the time, I tend to give her a free pass because her dramatics are likely rooted in trauma more serious than, "the guy I like didn't ask me to prom."

Quick summary:
Nadine is a lovable, frustrating jerk who totally loses her shit whenever her best (and only) friend Krista (Haley Lu Richardson) starts dating her brother Darian (Blake Jenner). The plot is pretty rudimentary with a few typical teen movie exceptions that prevent it from feeling totally rote and cliche. There's no grand romantic gesture at the end and Krista and Darian are genuinely nice people who actually care about Nadine's feelings.

Thoughts:
I wish this movie existed whenever I was a TA for an undergraduate "Adolescence in Cinema" class at The New School. Surprisingly, several great movies about being a teenager have come out since I taught that class. Here are a few that immediately come to mind:

I would trade "Clueless" and "The Breakfast Club" in for one of the above any day. I mean... "Clueless" is a fun movie, but do I really seem like the type of person who cares if Cher Horowitz lives or dies? Also, now that I know what a dumpster fire Stacey Dash is, all nostalgia for that movie has melted away.

My point here is that in recent years, teen movies have taken a turn for the better. They're not as formulaic, characters have depth, and the acting is often top-notch. In the case of "The Edge of Seventeen," the caliber of the cast and screenplay are what impressed me most. Hailee Steinfeld is immensely talented and I hope she stops trying to be a popstar and starts focusing on acting. I loved her in True Grit and was sad to see her follow up that performance with several "whatever" roles in a string of shitty movies. Who the fuck represents her? She deserves better than "Pitch Perfect 2."

Nadine is a complex character and I am sure she was a joy for Steinfeld to portray. After all, she gets most of the best lines (the other good ones are reserved for keeping Woody Harrelson's teacher/mentor character from slipping into boring cliche). At the beginning of the film, Nadine tells us,

There are two types of people in the world. The people who radiate confidence and naturally excel at life, and the people who hope all those people die in a big explosion.

Nadine obviously fits into the latter group. She's supremely awkward and cranky, but she knows it and is unwilling to change to fit in with her peers. What she craves isn't really acceptance from others, anyway; it's self acceptance. She tells Darian,

You know, ever since we were little, I would get this feeling like... Like I'm floating outside of my body, looking down at myself... And I hate what I see... How I'm acting, the way I sound. And I don't know how to change it. And I'm so scared... That the feeling is never gonna go away.

Nadine should be in therapy because she desperately needs someone to help her figure out how she can become happy with herself. She needs to identify areas of improvement (self-absorption, her flair for dramatics, general dickishness) and start working on them in earnest. I should probably stop comparing "Gilmore Girls" to literally everything, but it's hard not to see Nadine as a young Paris Geller, sans confidence and pre-Terrence. As Paris once told Rory,

I want to live my life so that I'll be able to read an in-depth biography about myself in later years and not puke.

I want the same for Nadine. If she starts giving people a chance (Darian, Krista, Mr. Bruner, Erwin) and genuinely listening to what they have to say, I think she'll get there.

"The Edge of Seventeen" made it into my top films of 2016 because it's an updated, more realistic take on what it's like to be an outsider in high school. Eventually, I'd like to see this film replace others (namely those dog turd John Hughes films) in the American teen cinema canon. 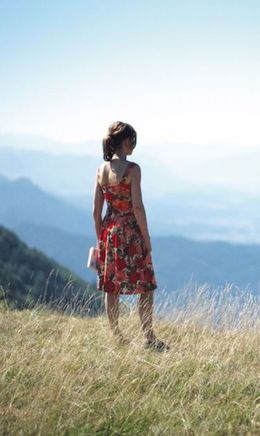