Vibe:
Ethereal, weird, and mysterious. The cinematography is gorgeous and Royalty Hightower is a badass. The first 10-15 minutes gave me major "Carrie" vibes, but the film ultimately takes a different tonal direction. I should admit I was a little bit disappointed this wasn't a horror film. I love a good, feminist horror film and there really haven't been any since "It Follows." I knew nothing about "The Fits" before watching and I found myself continually willing it to go in a darker direction.

Side note: Please send me your horror film recommendations; I haven't seen a good one in so damn long. I watched "Hush" on Netflix a few months ago and fucking hated it/couldn't believe that it got so much praise/hype. I'm looking for films along the lines of "The Descent," "The Guest," "It Follows," "A Girl Walks Home Alone at Night," "The Babadook," etc.

Best time to watch:
When you're high. Like "Upstream Color," "Weekend," and "The Science of Sleep," this is one of those films where I would 100% recommend altering your mind before you watch. It makes the ending (and this song) even more mind-blowingly beautiful.

Why you should watch:
"The Fits" had a budget of €150,000 and is proof that it doesn't take a ton of money to make a beautiful, interesting film. This is Anna Rose Holmer's first feature and she's definitely a director to watch. The cinematographer, Paul Yee, is also someone I hope to see more from. "The Fits" is his first feature film and you can read more about how he approached the process in this Indie Wire article.

Where to watch:
Amazon (free with a Prime subscription)

Quick summary:
"The Fits" follows a young girl named Toni who spends her days sparring with her brother in a boxing ring at a Cincinnati community center. When she catches sight of The Lionesses, a drill dance team, practicing in the gym down the hall, her interests begin to change. After Toni joins the team and attends a few practices, something bizarre begins to happen to the girls on the team: they're overcome by wild, scary "fits" that land a few of them in the hospital.

Thoughts:
I'm not going to bullshit you and say that this is the best film I've ever seen, because it isn't. It wouldn't even make my top 25 list for 2016. With about 15 minutes remaining, my boyfriend turned to me and said, "If I have to watch this goddamn dance one more time, I'm going to scream." While I personally didn't experience that level of annoyance, I understand his sentiments. "The Fits" is pretty repetitive. Here's a breakdown of the film:

What I outlined above is essentially the entire movie, but describing it as such totally discounts the viewing experience. On its face, "The Fits" sounds stupidly simplistic and not that interesting, but it works, especially if you go into it expecting a tone poem instead of a conventional movie. The vibe this film creates is much more compelling than the plot.

The other aspects that drew me in are the budget and time constraints that Anna Rose Holmer had to contend with and use to her advantage. Even for an indie film, €150,000 is a tiny-ass budget. As someone who spends the work week dreaming about quitting her job and making movies, successful small budget films like this one are inspiring. The principle shoot was only twenty days and took place in a Cincinnati, Ohio all-purpose room with nasty, overhead fluorescent lights. When I was in school, many of my best films were created with self-imposed (or universe-imposed) constraints. Whenever a filmmaker has ample time, money, and actors, the end results are not necessarily better; as a matter of fact, they're often worse (e.g., all of those shitty Marvel movies).

"The Fits" deals with its constraints in a pretty masterful way. One aspect that immediately stuck out to me is the script: it barely has any dialogue. When dealing with young, inexperienced actors and a short shooting schedule, cutting out dialogue is an excellent way to make sure the film wraps on time. In an interview with Jezebel, Holmer says,

You know, we really see The Fits as a dance film, from frame one to the closing credits. So many of our choices were about movement as communication, and how we use our bodies as markers in different ways to consciously and subconscious [sic] tell the world about ourselves.

Holmer lets dance tell the story and takes the onus off the dialogue.

Paul Yee, the cinematographer, talks about some of the limitations he faced while shooting the film (see the IndieWire article linked above):

The community center was a challenge because there were so many vertical and horizontal lines built into the architecture. Certain rooms and hallways looked crooked unless the camera was perfectly level at a zero degree tilt, so that became another self imposed limitation - we avoided shooting anything high or low angle unless it was absolutely necessary.

With these self-imposed shooting constraints, the film develops a distinct, cohesive look that actually serves the narrative much better than more variety would have.

"The Fits" is full of lessons on how to make the most of limitations. Although I wouldn't call it one of my favorite films of 2016, I would definitely categorize it as one of the most useful and important, especially for aspiring filmmakers.

I haven't talked much about the plot or the messaging here, because I feel it's pretty straightforward. To sum it up in one line from the dope song at the end, "Must we choose to be slaves to gravity?" If we don't make a conscious effort, it's easy for our own lives and identities to be taken over by the forces of the universe. If we believe what we're told, question nothing, and simply let things happen to us, we might end up in a situation where, oh, I don't know...a fascist dictator is running our country and with each passing day, more of our fundamental rights are stripped away.

In "The Fits," Toni's image of herself is shaped by societal implications and the people around her. When the younger girls start to experience the fits, we see Toni begin to think about identity and causation for the first time. What does/not determine whether or not she'll also experience "The Fits?" Does she have any control over the situation? Should she try to control the situation? Toni might not have a firm grasp on what it is that she wants (and the viewer also isn't privy to that information), but we can see the wheels start to turn, and that's what is important. 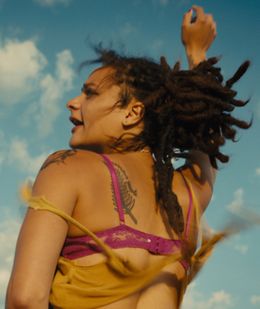 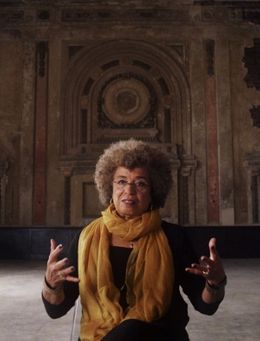