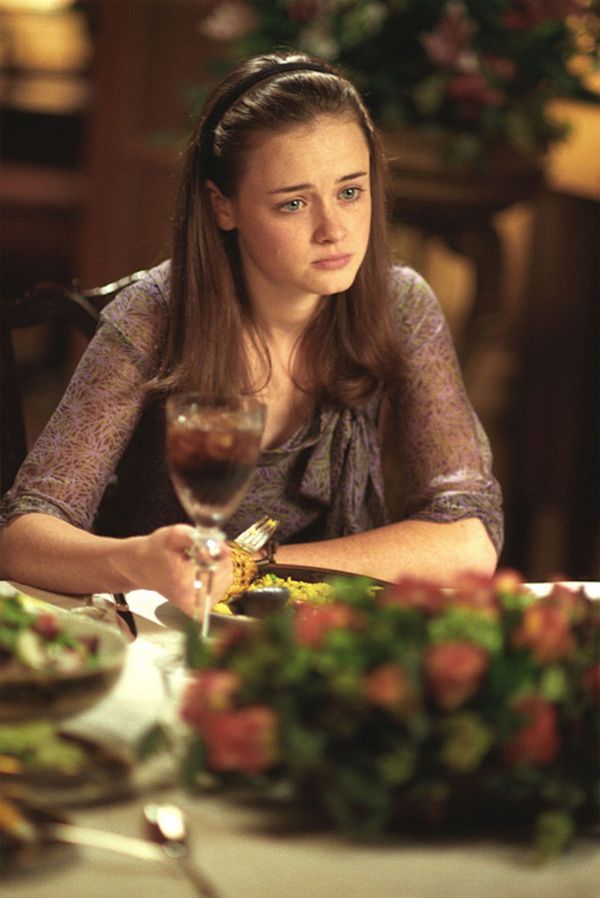 Directing and writing credits:
Directed by Michael Katelman, written by Daniel Palladino. I don't talk that much about the "Gilmore Girls" direction because honestly, it's pretty damn formulaic. Are you a competent director who is well-versed in early 2000s teen shows? Great, you're hired! Occasionally, there will be some character or action inconsistencies, but those usually come more from the writing (particularly from Daniel Palladino... which I'll discuss later).

Most batshit crazy outfit:
Fran wears a cardigan sweater with a squirrel motif, but these two fashion victims still find a way to one up her: 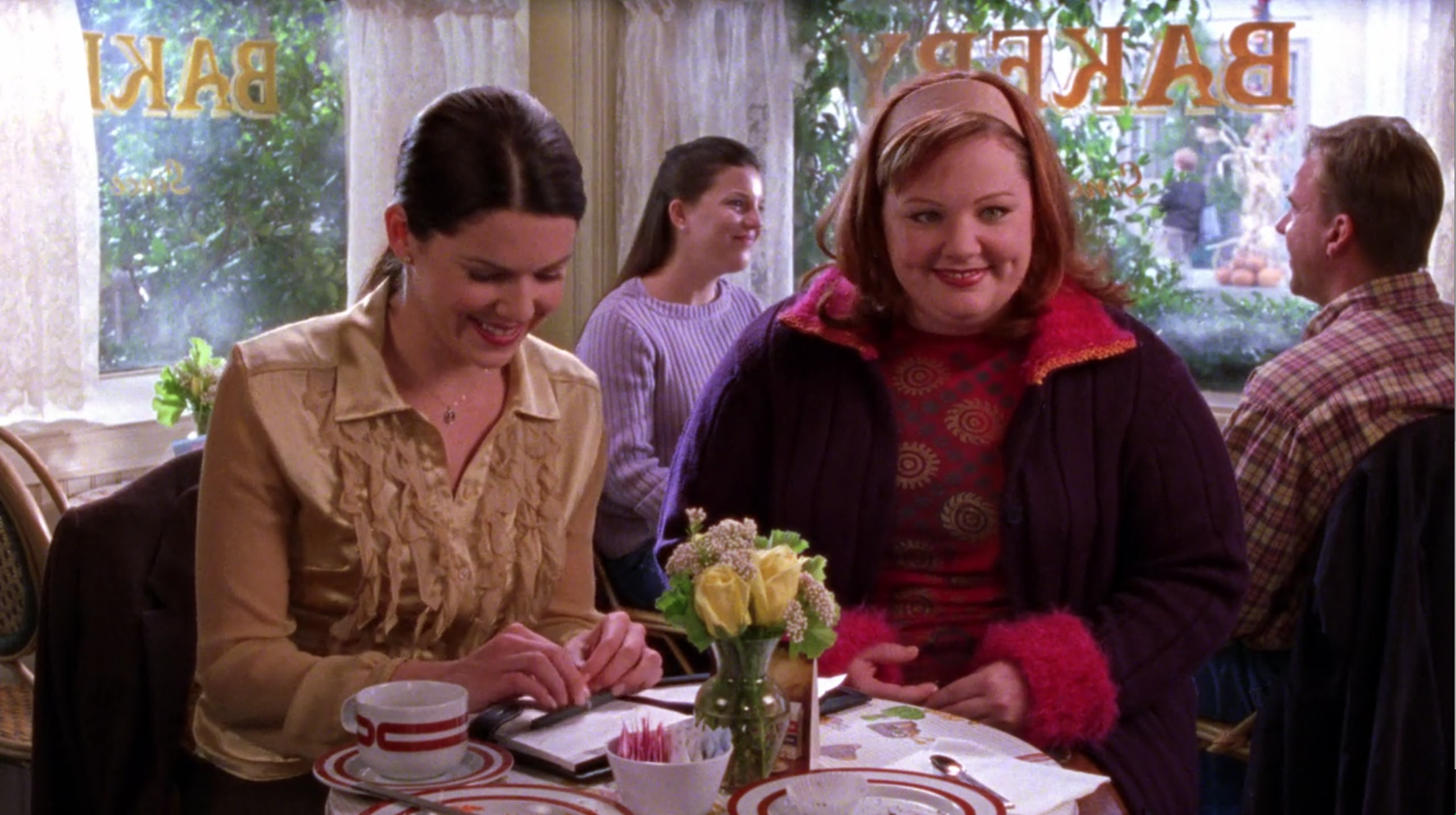 Lorelai tends to gravitate toward ruffles and fabric that is highly flammable. She later wears a t-shirt that says "cuties," but I still think this gold monstrosity is worse. At least Lorelai gave her signature turd brown lipstick a break.

And omfg, Sookie ... it's like she saw "Clueless" for the first time and said, "I could DIY the shit out of those feather sleeves," but only had a Tickle Me Elmo at her disposable. 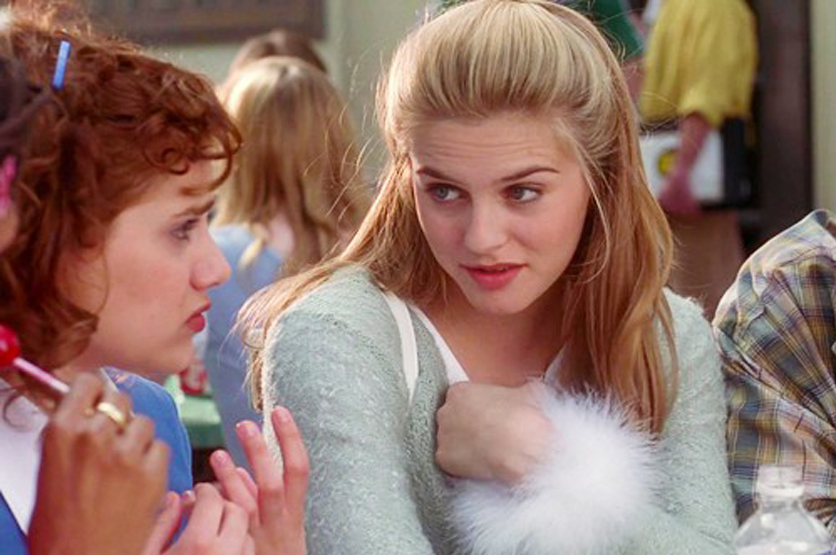 As if, Sookie. Cher wore it way better.

Most irritating Rory or Lorelai moment:
There are many in this episode. I hate the way Lorelai treats Emily at the unveiling of Rory's portrait.

Emily: You've got to admit, it turned out better than you thought it would.
Lorelai: Yeah.
Emily: Well, come on, say a little more than that.
Lorelai: It's great Mom, it's fabulous. It's just a notch below Rembrandt.
Emily: Well, you don't have to take that attitude.
Lorelai: What do you want from me? I'd light some sparklers and jump up and down yelling "Yay for the painting," but I'm fresh out of sparklers and my feet hurt too much to jump. But I promise next week when I have more energy, I'll write a love song for the chandelier.

For once, Emily took Lorelai's advice on something and all she wants is a little praise and positive reinforcement. Instead of throwing her a bone, Lorelai is mean and petty in a way that isn't even funny. You'll write a love song to the chandelier? Okkkkkkay. If you're going to treat someone like shit, at least make sure your insults are witty.

This is a small thing, but I hate the way that Rory says, "of course" when Jess asks if Dean is her boyfriend. Why of course? Because any dude you're hanging out with 1-on-1 must be your boyfriend? Because you and Dean have undeniable chemistry so it's clear that you're an item? Bitch, please.

Number of times Rory or Lorelai treat their bff like shit:
Lorelai is a monumental CUNT to Sookie and 100% deserves to get punched in the face. If you can't even tell your best friend that you've known for years how upset you are that the place where you raised your daughter may no longer exist, then you have some emotional homework to do. Lorelai doesn't strike me as the type of person who does much self-reflection, so maybe she's just not aware of why she feels so upset. Even if this is the case, it doesn't make her actions excusable.

She denigrates Sookie, pretends to be smarter than she is (Lorelai knows fuck all about the economy), and isn't honest about her true concerns. She's incredibly condescending and doesn't deserve any of the kind, patient people in her life, especially Sookie.

Lorelai: Well, I know you would like things to be simple and straightforward but unfortunately things are more complicated.
Sookie: Okay, that's why we'd be partners. If something gets too heavy for the one person, the other one's there to pick up the slack.
Lorelai: Yes, well that's great in theory, but I gotta tell you, my back is aching from all the extra slack I'm taking up!

If my best friend treated me this way, she would no longer be my best friend. Get out of this toxic relationship, Sookie! It's no wonder she's moved on to bigger and better things in "AYitL." I know the Palladinos say Sookie isn't around because of Melissa McCarthy's scheduling conflicts, but I choose to believe it's because she found a good therapist and realized that Lorelai is a malignant narcissist, unworthy of her time and attention.

Best literary or pop culture references:
Sookie calls Donald Trump a bastard, which is pretty satisfying. I also enjoy the thought of Lorelai driving some painter to the brink of insanity with her Billy Idol scowl.

Rory: Why did they quit?
Emily: She wouldn't stop scowling.
Lorelai: I was going for a Billy Idol thing.
Emily: The one from Italy had some sort of breakdown.
Rory: Oh my God.
Lorelai: Hey, it didn't hurt Van Gogh, the guy should thank me.
Emily: A year later, I swear I saw him rummaging through our recyclables. 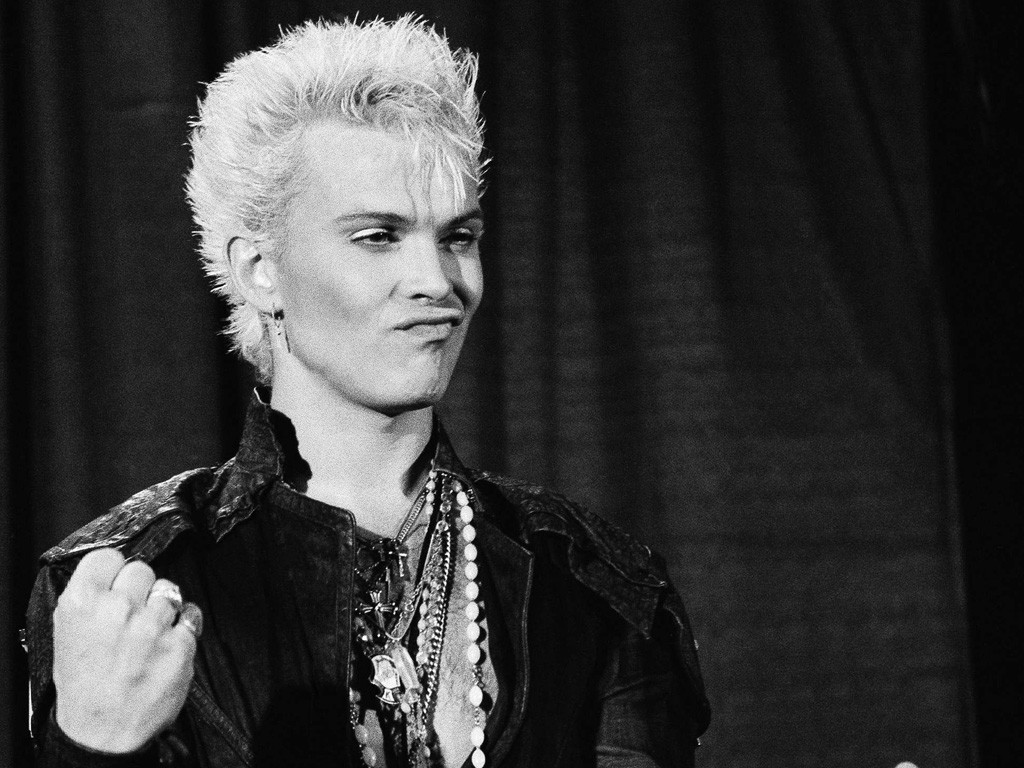 Stars Hollow weirdness:
Jess convinces Taylor a murder happened outside of his market simply by drawing a chalk outline of a body on the sidewalk and slapping up some police tape. Taylor throws a hissy fit, then holds a town meeting, without inviting Luke, to discuss "the Jess situation." This scene has one of my all-time favorite lines from Lorelai.

Taylor: This goes well beyond a head of lettuce, young man. The charges against your nephew are numerous. He stole the 'save the bridge' money ...
Luke: He gave that back.
Taylor: He stole a gnome from Babette's garden.
Luke: Pierpont was also returned.
Miss Patty: He hooted one of my dance classes.
Fran: He took a garden hose from my yard.
Random Man: My son said he set off the fire alarms at school last week.
Lorelai: I heard he controls the weather and wrote the screenplay to Glitter.

Sharpest insult or one-liner:
Whenever someone asks me how I am at work, I tend to go with some variation of Jess's response.

Jess: Coffee?
Lorelai: Oh, yeah, thanks. How are you Jess?
Jess: I'm not bleeding or anything.
Lorelai: Well, then it's gonna be a good day, huh?

I know Jess is a surly asshole, but come on ... at least he lives his truth. He doesn't change his disposition just to make other people feel comfortable, which I admire.

Books mentioned/books Rory is reading:
Jess compares the town meeting to "To Kill a Mockingbird" and Rory accuses him of trying to be Holden Caulfield ("Catcher in the Rye"). These two were meant for each other ... until Jess ruins everything.

Best song of the episode:
The town troubadour plays two songs during this episode, but neither of them stood out to me.

Thoughts:
In this episode, we meet Mia, someone who is incredibly important to both Gilmore Girls but rarely mentioned throughout the series. This woman gave Lorelai her first job as a maid and acted as her surrogate mother after she left Richard and Emily's, so it's strange to me that her introduction is so brief. Lorelai is emotionally distraught when she finds out Mia wants to sell the Independence Inn, but up until this point, we aren't given much background about why she would care so deeply.

It certainly doesn't help that Mia is kind of an asshole and I don't find her interesting or endearing. Emily can be cold and out of touch with reality at times, but at least she's funny and feels like a round character. I definitely didn't love her right away, but she grew on me with each episode and by the end of Season 2, became one of my favorite characters. Mia doesn't get the benefit of multiple episodes, so the writers only have this short chance (and again in Season 7) to make us like her. Unfortunately, they fail, and Lorelai's heightened emotions around losing her "memory home" don't ring true to me. It's one of the rare cases in the "Gilmore Girls" universe where I can't just blindly believe what I'm told.

And the way Lorelai treats Sookie is so awful! It's unclear to me when Sookie and Lorelai met and started working together. Does Sookie know Mia? They don't interact in this episode, so my guess is that Sookie started her job later, after Lorelai took over the managerial tasks and Mia moved to Santa Barbara. When Lorelai finally does apologize to Sookie after her freak out, the conversation feels stilted and not true to either character.

Lorelai: I'm sorry about what happened. I said stupid things, and I said them for reasons that have nothing to do with you and I hate myself for doing it and I know you do too, and I am sorry.
Sookie: It's okay.
Lorelai: No it isn't. You are a brilliant chef and to think that you should do things differently from how you do them now is ridiculous. You don't tell a great violinist to hold his bow differently. You don't tell a great cymbal player to crash his cymbals differently. You just let them play.
Sookie: There are great cymbal players?
Lorelai: Theoretically.
Sookie: Okay, well, it's okay.
Lorelai: I wanna go ahead with our plans. Forget my freak out. Pretend it didn't happen. Let's move forward.
Sookie: Well ...
Lorelai: You don't want to move forward?
Sookie: No, I do. But I need your promise you're not gonna lose it on me again.
Lorelai: I promise.
Sookie: 'Cause I couldn't take losing a business partner and my best friend in one fail swoop. It'd be too much.

These two are supposed to be bffs, so it's weird to me that Sookie doesn't ask Lorelai what exactly happened. It's not Sookie's job to act as Lorelai's therapist, but I would think she'd want to know what triggered the mean behavior. If a friend I was going into business with treated me like shit and then gave a sort of half-assed apology with zero explanation, I would be far less forgiving than Sookie.

Daniel Palladino writes quirky, fun dialogue, but I think he frequently fucks up more serious interactions and chances at character development. I don't think he understands who the characters are quite like Amy does. I'll try to point out other character inconsistencies/issues with DP's writing as we move through the series.

Aside from lightly flirting with Jess and convincing him to treat Luke better, Rory doesn't get much to do. It's obvious that she likes Jess because she finds his very unfunny fake murder prank amusing even though it's stupid as fuck. 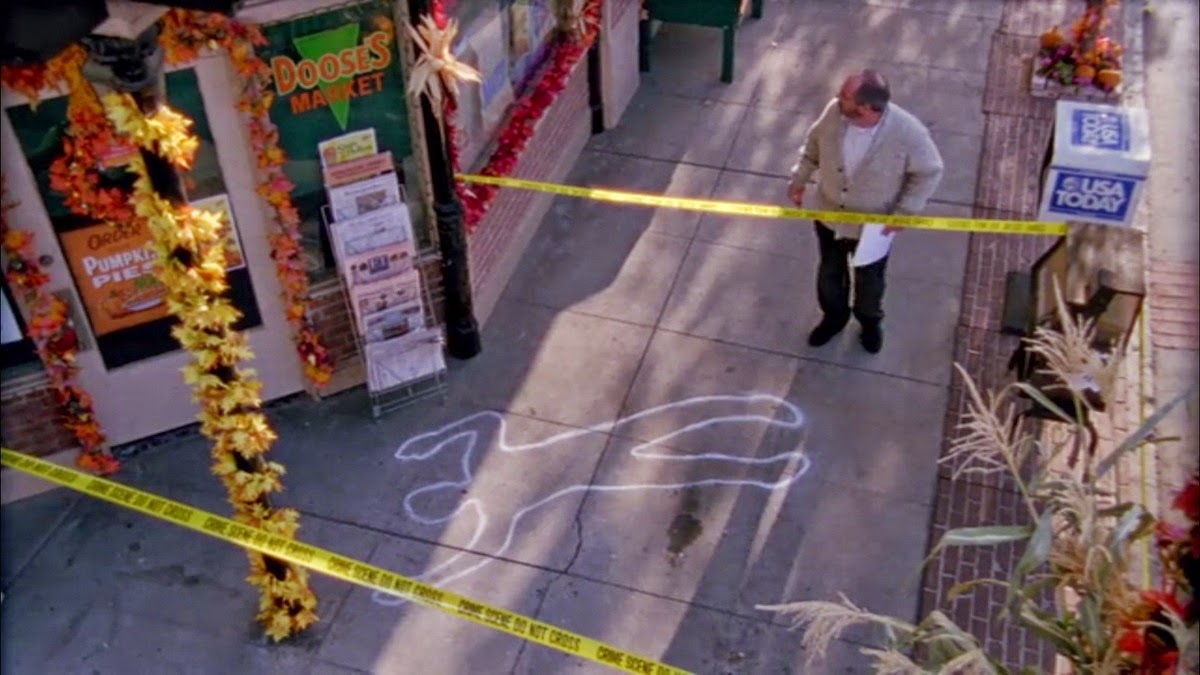 Even the hooligan/punk stuff Jess does is super tame. It's not like he snorted a bunch of coke and lit Doose's Market on fire in the middle of the day, killing Taylor and eight other townspeople. The citizens of Stars Hollow need to calm down and put things into perspective. 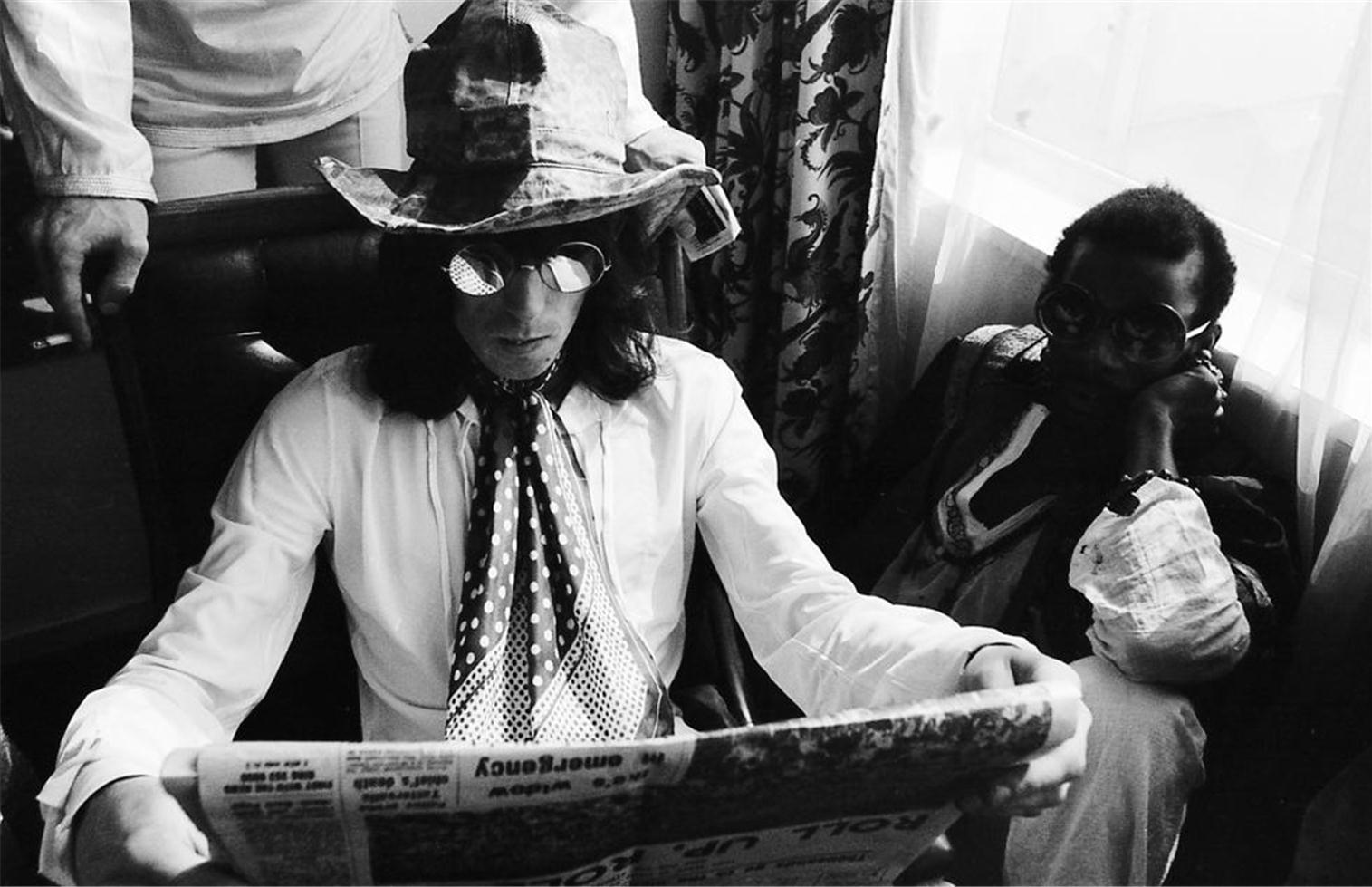 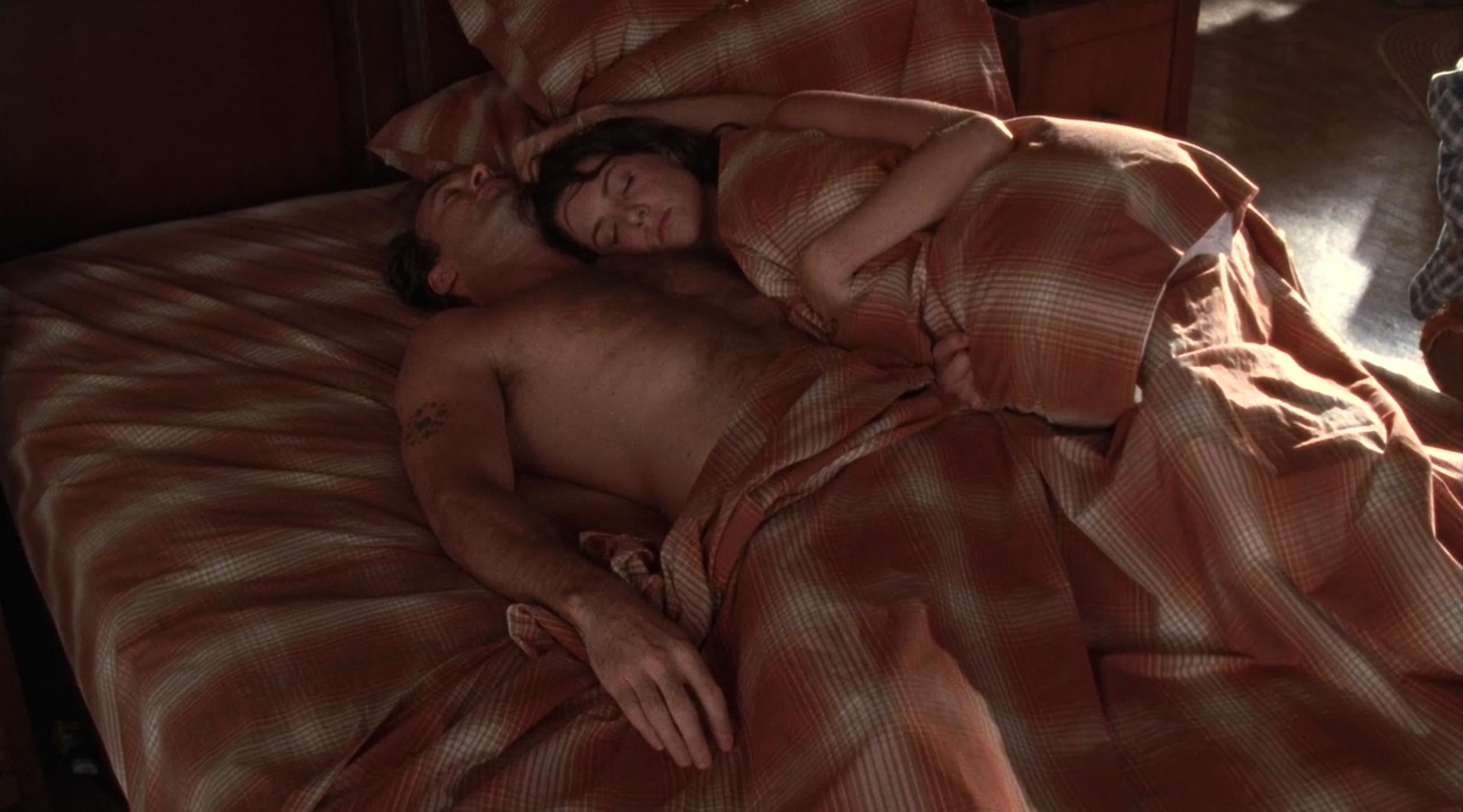 The Internet is sadly devoid of shirtless Luke Danes pics, so this is a screenshot.