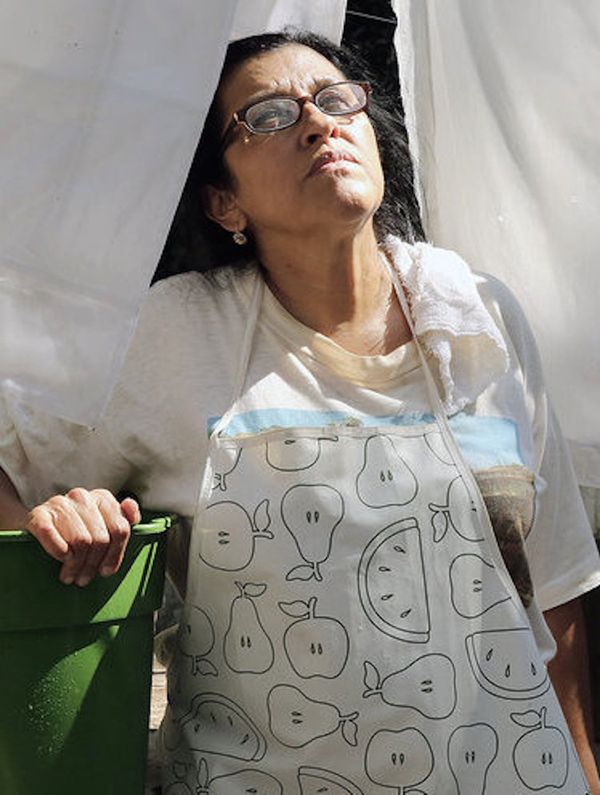 Vibe:
Charming, joyful, and engaging. If this film ended after the scene of Val (Regina Casé) finally splashing around in the pool, I would sing its praises completely; however, it takes a weird detour that doesn't seem to fit with the rest of the film's tone or narrative style. The ending ties up every loose string and provides unnecessary narrative closure that feels forced.

I don't want it to sound like I'm shitting on this movie, because I very much enjoyed it. I only wish that the last 15 minutes had been cut completely because "The Second Mother" would have been a much better film without them.

Best time to watch:
When you want something that's easy to watch but still worthwhile. Maybe you've been binging the new "Twin Peaks" and are longing for something straightforward that doesn't involve a talking arm/tree/spirit. If that's the case, "The Second Mother" is probably exactly what you need.

Even though my mom abhors movies with subtitles, I think she would like this one if I could convince her to watch it. The themes are classic and straightforward, but masterfully layered in a way that makes them seem fresh. Also, Regina Casé is wonderful and impossible to dislike. I find her pronunciation of Jéssica so soothing that I could probably use it as guided meditation for sleep.

Worst time to watch:
When you're looking for something mind-blowing. "The Second Mother" is a solid film and I'm not mad that I watched it, but it didn't knock my socks off. I wasn't up all night reading articles, reviews, and interviews or thinking about it obsessively. It's a heartfelt film with a fantastic cast, but it didn't cut deep to my core.

Where to watch:
You can watch it for free on Amazon Prime or rent it for $2.99 on iTunes.

Quick summary:
Val is a live-in maid for a wealthy family in São Paulo, Brazil. She cooks, cleans, and takes care of the family's son, Fabinho (Michel Joelsas). Val and Fabinho have a close, loving relationship. She's been around since he was small and he sees her as a surrogate mother, especially since his own mother, Bárbara (Karine Teles), isn't around very much.

Val also has a daughter of her own named Jéssica (Camila Márdila), but they haven't seen each other for the past 10 years. When Jéssica comes to São Paulo to stay with Val while she studies for the FAU entrance exam, tensions (class, generational, familial) arise.

Thoughts:
I watched this movie with my friend Gina on Sunday night and on Monday, we watched "Krisha" by Trey Edward Shults. I wish I had saved "Krisha" for later because I loved it so much and it made "The Second Mother" feel even more flawed.

Both films feature raw, female performances but "Krisha" goes for the gut punch and doesn't give a fuck about making you feel warm and fuzzy. "The Second Mother" wants to make sure nothing is left ambiguous, that you know for certain the circle of life will continue and Val will become a second mother for Jéssica's baby. It's all a little trite and doesn't feel earned.

While I hated the last 15 minutes, I did find the rest of the film interesting and worthwhile. It made me think about my own mom and how our relationship has evolved over the years. I imagine it's hard to have a daughter with wildly different values, interests, and goals.

My mom (Joni) was a stay-at-home mom who took care of me and my brother when we were in K-12. I loved that she was always there to help me with art projects, cook dinner, and pick me up from cross country practice. Whenever I went to college, I started to resent her for her career choice. If someone asked what my mom did, it felt pathetic to say she was a stay-at-home mom.

If she had worked, I'm sure I would have felt equally discontented. I took her presence for granted, but I know I would have immediately missed her the first time she wasn't around to watch "Gilmore Girls" with me. I didn't need a second mother because my first mother was always present and putting in the work to ensure that I didn't grow up to be an asshole.

As a mother, I think it must be tremendously hard to find a good balance of caring for your kids financially and emotionally while also maintaining a semblance of your own passions and interests. We tend to judge women no matter what they choose to do - work, stay at home, or some combination of both. If a woman works all the time, she's neglecting her children; if she stays at home with her children, she's throwing away her career.

Val makes the choice to go to work and support her child financially. As a result, she struggles to emotionally support Jéssica. At the beginning of the film, we hear Val talking to Jéssica on the phone while a tiny Fabinho plays in the pool. At first, she seems to be pleading with someone to convince Jéssica to come talk to her mother:

Convince her, say her mommy misses her terribly.

Then a few second later,

Oh my love, oh mommy's treasure, are you being good? Obeying Sandra? Done. Don't talk to me like that, I'm your mother! Talk to me properly, I called just to hear your voice. Ok. I love you. Bye.

Even as a child, Jéssica is angry about her mother's absence. After hearing this conversation at the beginning of the film, it's not surprising to learn that over the subsequent years, Val's relationship with her daughter has deteriorated to the point where they no longer even speak on the phone.

Val's rocky relationship with Jéssica is especially upsetting since we know she's a warm, caring person. We see her stroking Fabinho's head and comforting him, making sure no one else eats his special ice cream. Val wants that type of intimacy with Jéssica, but it's something that she hasn't earned. She wasn't around to build a strong bond with Jéssica and as a result, her physical affection is unrequited.

Essentially, Val has raised two very different kinds of kids who will probably both need therapy. Fabinho has been comforted and emotionally supported his entire life, and has grown up to be sweet, but kind of immature and lazy. Jéssica has been raised with a hands-off approach from her mother. A phone call is not the same as an in-person visit and being told that you're loved is not the same as feeling loved. Jéssica is a colder person than Fabinho, but also incredibly independent, hardworking, and self-assured.

Which situation is better? Both have downsides. Fabinho will be in therapy to talk about his trouble finding a woman who comforts and supports him like Val; Jéssica will discuss her issues with intimacy. All mothers, even the best ones, fuck up their kids in some way; it's unavoidable. Muylaert is aware of this, "damned if you do, damned if you don't" paradox of motherhood and brings it to life in a beautifully simplistic, realistic way.