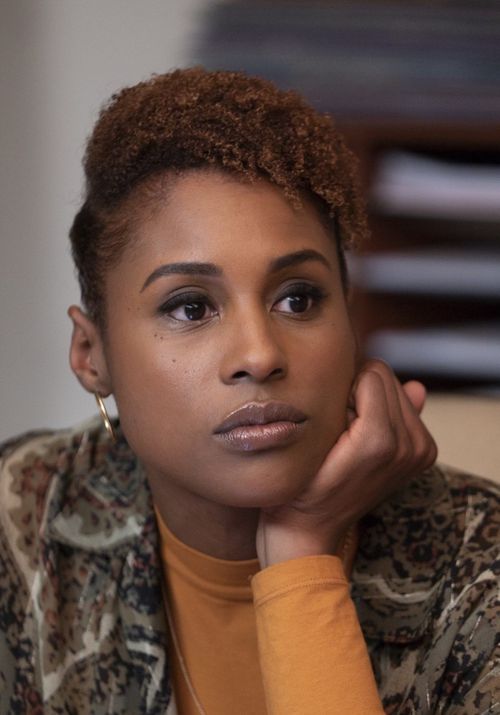 "Familiar-Like" is directed by Pete Chatmon, written by Amy Aniobi. You might remember Chatmon as the director of "Due North," the series-within-a-series from Season 2 of "Insecure." Chatmon also directed two feature films, "Premium" (2006), a romantic dramedy, and "761st" (2007), a documentary about the 761st Tank Battalion in WWII. As always, there are some beautiful shots in this episode, mostly in the club scene, that made it fun to watch.

I streamed "Familiar-Like" on HBO GO and before it started, there was a really nice promo clip (part of the "Because of Her" campaign) that featured Aniobi writing a scene while Issa and Molly acted it out in real time.

Aniobi has been a writer on "Insecure" since Season 1 and has worked on shows like "2 Dope Queens" and "Silicon Valley." I'm not 100% sure about this, but I think she got her start as a writer on "Awkward Black Girl," Issa's web series that ran from 2011-2013. If you want to know more about her, this interview is worth reading.

I know in my last recap I said that Issa needed to take a break from dudes, but this episode reminded me of how good things are when she and Daniel actually connect. I still don't want her to rush into a relationship with Daniel, but give me more episodes like this one and I probably won't be mad if they eventually end up together after Issa spends some time alone. I don't dislike Daniel (although I'm not sure I'll ever forgive him for his unannounced cum-shot last season) and I'm happy to see him vibe with Issa, but I don't want her to start sleeping in his bed any time soon.

When the episode opens, it's obvious that Daniel's been avoiding her. Since her apartment options still look bleak af, Issa texts him to see if he's good. He responds back with yet another iciliy formatted message: "Yeah, I'm straight. Thanks." In other words, "You haven't seen me in a few days because I'm purposely making myself scarce." In response, Issa considers sending him one of the "dead to me" Bitmojis, but I personally think she should have gone with this one: 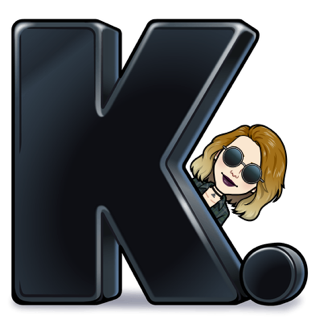 Nothing says "fuck you" quite like the "k" Bitmoji.

After getting turned down for yet another apartment, Issa meets will Kelli in an attempt to get her life back on track. Since Kelli is a good friend, she gives Issa straight advice and tells her that she isn't financially ready to move out on her own yet. I love when Kelli says Issa can get a cosigner and then quickly adds "not me." I've read some Internet criticism about Kelli and I don't agree with any of it. Kelli is the fucking best and a good example of a person who has her shit together but isn't a total square. "Don't look a gift horse in the dick" is both funny and practical. Kelli 4 ever.

After using a paper towel ply inquiry as an excuse to call Daniel, Issa asks if she can stay at his place for a "couple weeks longer." Daniel tells her that Vanessa isn't exactly cool with Issa crashing and says he can give her another week. As she starts to thank him, he hangs up on her mid-sentence. I'm not 100% sure who Vanessa is, but we do see Daniel hanging out at some awful woman's house (the part is listed as uncredited on IMDB, played by Mariah Dyson) earlier in the episode. How do I know she's awful? Because she says shit like, "I love light skin love" and describes Fais Do-Do as "thuggish." When Daniel says "Vanessa" isn't cool with Issa crashing, he really means that he isn't cool with it. If this chick we see is supposed to be Vanessa, it's clear she doesn't give two fucks about what Daniel does.

Since Issa knows she's on thin ice, not only does she bring home the paper towels, she also cleans the kitchen with them. When I lived in Brooklyn, people squatted at my apartment for weeks on end and never once cleaned the weed out of my toaster. Issa's a little pathetic and desperate right now, but at least she knows how to be a decent guest, capable of exhibiting gratitude. When Daniel comes home, he's irritated because the friend who was supposed to introduce him to Spyder (Roshon Fegan), the rapper he's trying to work with, has bailed on their plans. Issa offers to go to the club with him and from this point on, the tension between them starts to melt. 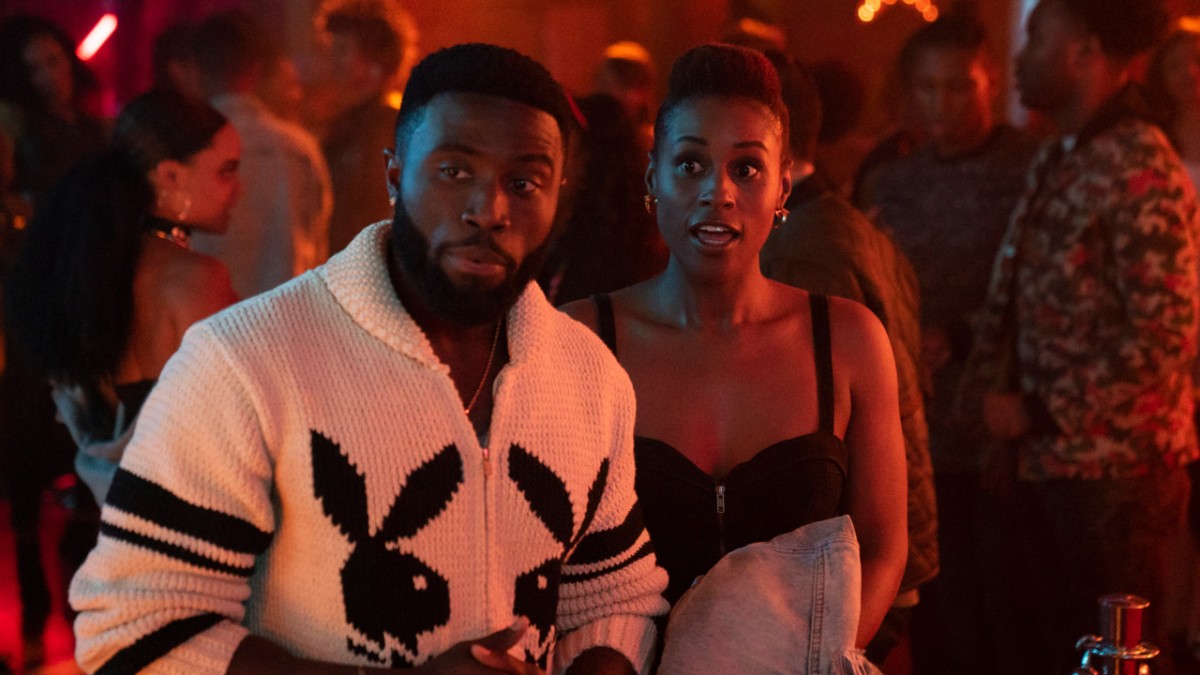 When they get to the club and find out they aren't on the list, Daniel is ready to give up and leave. Thankfully, Issa sees Khalil (Aaron Jennings) one of their old friends who is a successful producer in the same industry as Daniel. Khalil is able to wave them through the door, much to Daniel's chagrin. When asked about the themes for this season in an interview with The Hollywood Reporter, Rae said,

I wouldn't say Daniel is exhibiting toxic male black masculinity in this scene, but we do start to see how uncomfortable it makes him to rely on other people for things. He hates that his name isn't on the list and that it takes Issa's friendliness and Khalil's generosity to get them through the door. I could see the writers taking these feelings further and using his character to dive into that theme over the course of the season.

I totally relate to Daniel's awkwardness and inability to approach Spyder and introduce himself once he and Issa actually get into the club. I wonder if Daniel is an INFJ? 🤔 He's confident in his skills around Issa and when he's in the studio, but that attitude slips away whenever it's time for him to sell himself to someone important. Issa shares some of the same character traits. She's a great friend and hypewoman, usually giving solid advice to her friends and helping them make good decisions, but has a hard time approaching her own life with the same mindset. She's confident when she's mirror bitch or daydreaming in the middle of a meeting, but less so IRL.

When they're at the club, Issa is a real asset to Daniel. She pushes him to move outside of his comfort zone (talk to Spyder and potentially embarrass himself, ask Khalil for help) and reminds him that he's good at what he does. This episode shows us why Issa is good for Daniel, but is Daniel good for her? Issa needs someone to hype her up and make her feel good about herself ... someone who will give her confidence, but provide tough love when necessary. Basically, Issa needs the male version of Molly, but a little less type A. Daniel could be that person, but we haven't see evidence of it yet.

After a shooting at the club, everyone evacuates and Issa and Daniel get burgers at Brolly Hut. Issa tries to stay positive ("at least you and Spyder have a connection now"), but Daniel's feeling bleak.

Daniel: I'm too old for this shit. If I'd got shot, what would the news story say? Unknown SoundCloud producer dead.
Issa: It's better than mine. Lights out on debt-ridden Lyft driver with 3.6 rating, today at 2.
Daniel: Shit just sucks. It's like ... I've been working on my shit for a long time. I taught Khalil and I feel like ... like, I just ain't getting nowhere.

Oh, Daniel. Let's have a drink and commiserate because I feel you 100%. I haven't rewatched Seasons 1 & 2 in awhile, so I might be forgetting details, but I feel like this is the first time we really see Daniel act vulnerable. He spills his guts to Issa, lays his insecurities bare, and I'd be shocked by anyone who doesn't find that extremely sexy (Issa clearly does). What's even better is that Daniel listens to Issa and follows her advice. When they get back to his house, he calls Khalil! Issa is helping Daniel make real strides and it's so nice to see. He shows his appreciation by telling her she can stay as long as she needs and offers to let her sleep in his bed since the couch has been fucking up her back. We don't see Issa take him up on the bed offer yet, but the E3 preview let's us know that it's only a matter of time before she does. 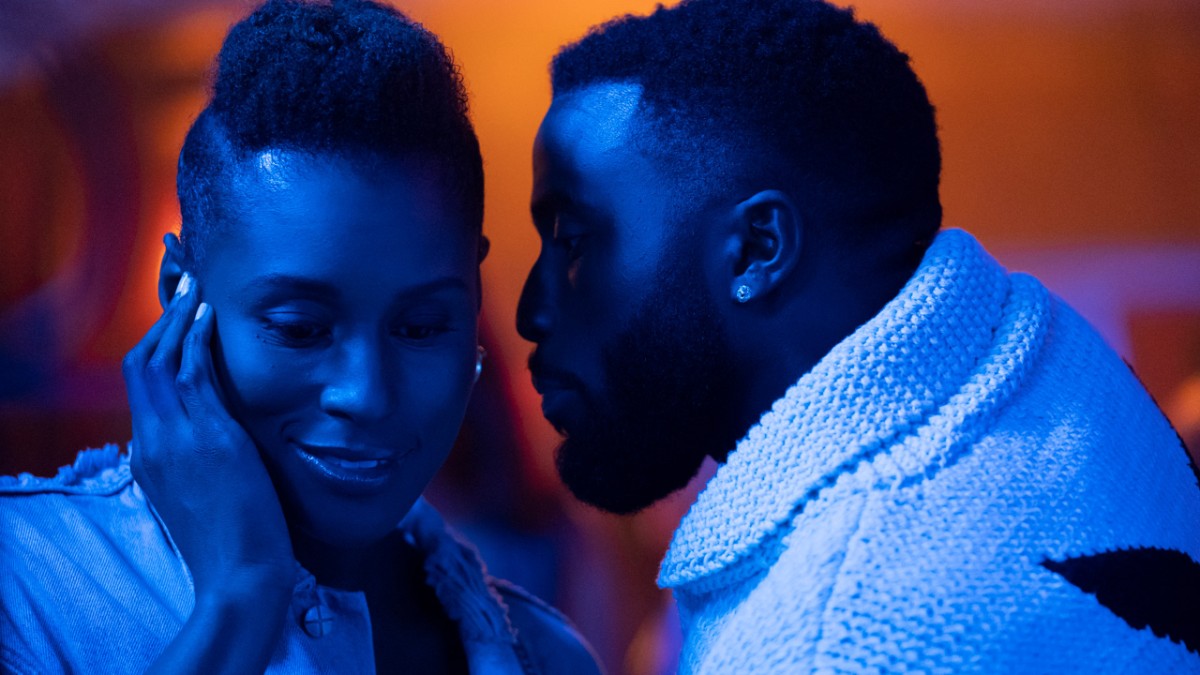 I love that Issa is genuinely interested in, and supportive of, Daniel's work.

While the focus is mainly on Issa and Daniel, there are some new developments at We Got Ya'll. Joanne holds a meeting to talk about the organization's racist-ass logo and the consensus from everyone is ... that it's a racist-ass logo. Joanne is totally defensive and refuses to take any of the team's critiques into consideration ("It wasn't racist when I made it"). I love the way this scene is constructed because while the critiques are all valid, they're infused with a heavy-dose of liberal nonsense. Instead of focusing on big picture shit, the We Got Ya'll group is nitpicking on little details like the name's grammatical incorrectness, the ratio of boys to girls, the absence of a rainbow in a post-"Moonlight" world, etc.

Issa sits at the table silently until Patricia (Kathreen Khavari) is like, "Honestly, whatever Issa thinks is probably right." Daydream Issa responds to this with a heavy-dose of realness:

"Oh, so now ya'll wanna be woke when a bitch been an alarm clock since day one? Well beep, beep, motherfuckers! BEEP, BEEP."

"Um ... I think you guys made some really good points and I agree with everything you've said ... and I thank you for saying it."

Ugh, Issa. I understand why she responds this way, but it's still frustrating. As she says the next day at lunch with the We Got Ya'll team (sans Joanne), it's awkward for her to have to speak up on every issue. She doesn't want people to perceive her as "black and angry," nor does she want to be "the voice of all black people." If Issa's going to stay at this organization and actually wants it to change for the better, she needs to speak up, though. Why stick around if you're unwilling to do everything you can to make improvements? I personally think We Got Ya'll is kinda doomed and pointless, but hey ... if Issa plays the game a little bit, maybe she can convince them to hire more team members who aren't white or take other steps in the right direction. I'm curious to see how this pans out over the course of the season. 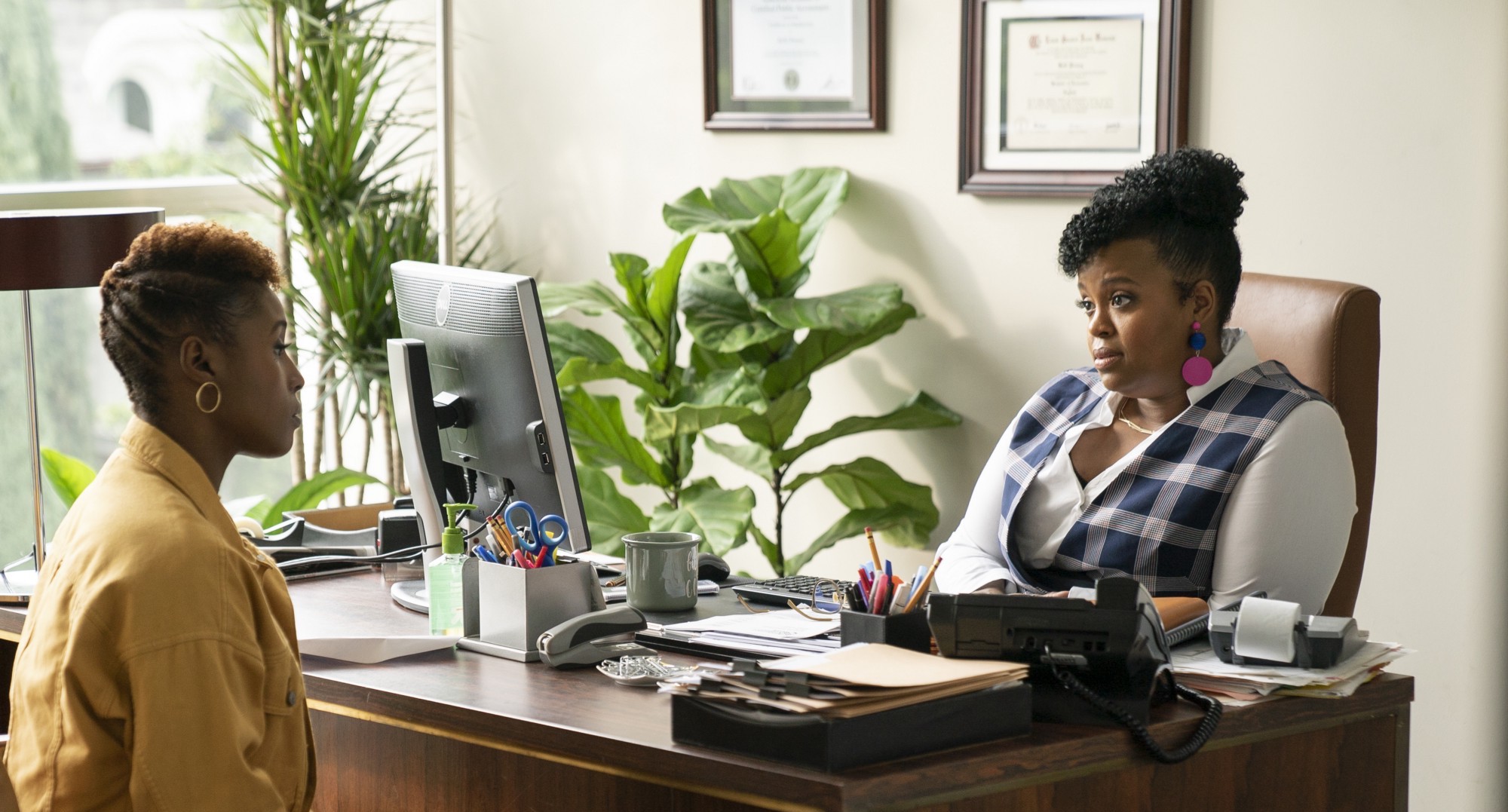 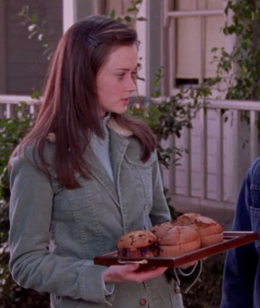 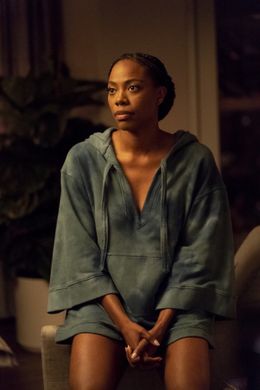