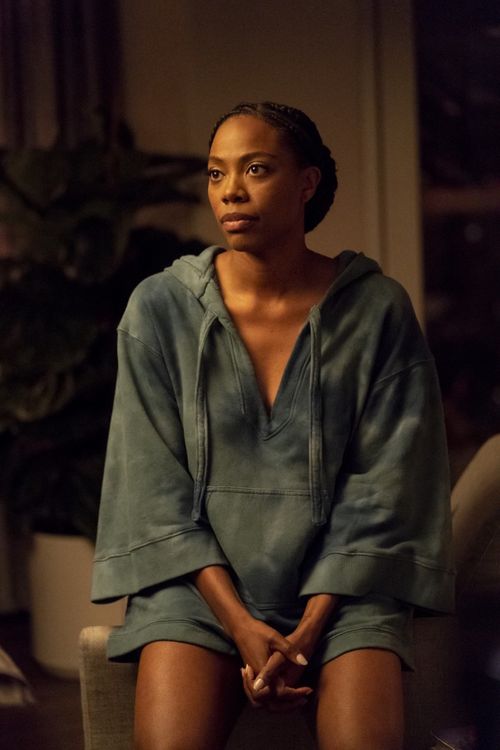 "Better-Like" is directed by Prentice Penny, written by Issa Rae. This is only the second episode that Penny directed; the first one was "Hella LA" from Season 2. I know him mainly as a writer/producer from shows like "Happy Endings," "Brooklyn Nine-Nine," and of course, as the showrunner of 'Insecure." I'm happy to see him as the director on this episode, but I honestly don't understand how he does it all.

In an interview with Variety, he talked about "Better-Like" and said that his goal was to create "distance and separation between Issa and the rest of the world." He did a great job of this throughout the entire episode, but especially in the first 30 seconds.

The episode opens with sweeping overhead shots of different scenes in Los Angeles. As Ravyn Lenae’s “Sticky" plays, we see the Popeyes drive-thru, Crenshaw High School football field, and people doing random shit, like walking a dog and buying ice cream from a pushcart vendor. Finally, we see two closer overhead shots: one of a welcome mat, followed by one of two people fucking. The ass facing the camera is unmistakably Daniel's (Y’lan Noel), but ... is the woman he's with Issa? After a few varied shots that make me thank the God I don't believe in that this show was picked up on HBO and not ABC, we see that no, Daniel is not with Issa. While he and his new girl make a valiant attempt at breaking the bed, Issa is awake on the couch with a disgusted expression on her face. YOU DID THIS TO YOURSELF, ISSA.

I guess she couldn't stay with Molly because of some old broken vase drama, but what about Kelli (Natasha Rothwell)? I bet Kelli is a great hostess and probably even has a guest room. Or hell, even Tiffany (Amanda Seales) ... or some random bitch from her sorority. There's no way Daniel was Issa's only option; she stayed with him for a reason, not out of necessity.

This outfit makes me jealous I can't pull off a cropped, Reebok turtleneck.

And make no mistake, Daniel knows exactly what he's doing. Remember when he came on Issa's face to even the score last season? He's pulling the same nonsense here by allowing her to stay at his house and fucking other women right in front of her. Everyone on this show is completely in their feelings, but 100% incapable of clearly expressing those feelings to the people that matter. Instead of just telling Issa how hurt he was that she made him her side piece and lied to him, Daniel lashes out at her in an attempt to hurt her as badly as she hurt him. It's wrong, but understandable.

Later, when Issa walks in on Daniel playing guitar and dancing around, they have a flirty exchange and he tries to kiss her. She's taken aback and tells him, "I don't think we should do this. I just think we ... know better." He tells her he's confused and doesn't understand why she chose to stay with him. After some back-and-forth, she says she's there because "I needed a place to stay and you're close to work." Ouch. And also, I don't buy it. I think she's there because she wants to make amends with Daniel and get their relationship back to a good place. In order to do this, they both need to find a way to kill the resentment and hurt feelings that are clearly bubbling just beneath the surface.

When Issa first showed up on his doorstep, she probably thought old wrongs would be a lot easier to mend, but after this episode, it's clear that Daniel isn't ready to put the past behind him anytime soon. Even though he does abide by Issa's wishes and lets her know that he's bringing a lady home, he does it in the most passive aggressive way possible. He texts her, "Heads up." In other words, "I'm doing exactly what you asked me to do and nothing more. I don't care about including additional words in this message to create the illusion that we are on good terms because we are not." Daniel throws shade better than the nastiest middle school girls, and I'd be lying if I said I didn't kind of respect it.

Toward the end of the episode, Issa and Daniel finally have what feels like an honest confrontation. She tells him she still has feelings for him, but it's not like she wants to be with him. After he prompts her to be real, they have this exchange:

Issa: I came here because I knew you'd be here for me ... and I really need someone like that in my life right now. You know, it's not easy for me to admit things when it comes to us sometimes, because you make it hard.
Daniel: Oh, so I told you to move in with me, right?
Issa: No. But Daniel, don't act all innocent like you don't know what you're doing. You're fucking other girls right in front of me like we don't have history.

After more than a few beats of silence and some unvoiced contemplation, Daniel walks out of the room and says, "Alright." By freezing Issa out a little bit, Daniel manages to force her to be vulnerable and then offers nothing up in return, even though it's clear he has something he wants to say. Prediction: Daniel will continue to give Issa the cold shoulder until she starts dating Nathan (Kendrick Sampson), aka the hot $50 Lyft tipper (or someone else). Dudes are so fucking predictable: they always want what they can't have. 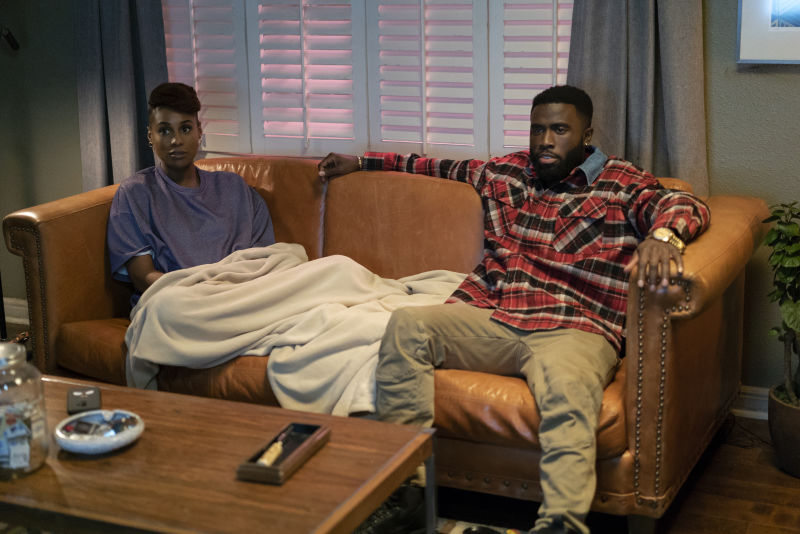 Keep the party Lyft going until you can get the fuck off Daniel's couch.

Issa's professional life is likewise shaky. She's on thin ice at We Got Ya'll after being taken out of the field last season for basically running a segregated after school program and neglecting to mention issues with the principal in her reports. Issa dealt with the situation poorly, but I empathize with her because the organization is clearly fucked and Joanne (Catherine Curtin), aka NO-anne, clearly has zero interest in hearing opinions that challenge her own preconceptions. If I was one of the few minorities working at a non-profit that served minorities, I think I would feel on edge all the time and unsure of how much of my true feelings I should share. Issa is in a precarious position and I'm really not sure how she's managed to work at We Got Ya'll for this long without screaming in someone's face.

As if her main job weren't stressful enough, Issa is also driving Lyft on the side to save up money for her own apartment. Her first rider immediately barfs in the backseat and I worry that this is a bad omen for the season. I don't think I can watch Issa get barfed on (literally and metaphorically) for seven more episodes. Gf can be selfish and annoying, but she really deserves a goddamn break. I want her to keep hustling, build up a fuck-off fund, and stay away from Lawrence (Jay Ellis), whose absence this season has been confirmed, and Daniel. Issa needs to focus on herself and take a break from dick until she figures out what she wants.

While Issa wades through her own personal shit storm, Molly (Yvonne Orji) starts to get her own affairs in order. At the beginning of the episode, she's sitting on a beautiful beach, enjoying a relaxing vacation (complete with temporary bae from Cleveland) before starting a new job. When she gets back to LA, Issa picks her up at the airport and the two have brunch together at Pann's. Issa and Molly's friendship is the absolute best part of "Insecure." These two vibe like no one else and are always honest with each other, even if what they have to say is rough.

Over food I can't identify (eggs and fruit?), Molly tells Issa, "I'm on some know better, do better shit." In other words, Molly is ready to be assertive and get what she wants and deserves. She's done sitting back and making the same mistake multiple times. And we do see a change in that way Molly acts, especially with Dro (Sarunas J. Jackson). After their night of Henny and oral, Molly demands that they set boundaries instead of folding when Dro offers to make pancakes. She gets out of bed and says,

"Listen, um, we need to decide whether we're friends who don't have sex, or acquaintances who just have sex. Because anything otherwise ... it's a little muddy. And I need boundaries."

Good for you, Molly! I mean, this is a totally unrealistic request, but it's a step in the right direction. Everyone knows that if you're going to have a fuck buddy, you don't choose someone you have history with; you choose a random and allow them to remain a random. While Molly's progress is minor, she does ask for her key back at the end of the episode and when Dro reacts negatively, she doesn't waver. Eventually, I think she'll come to the conclusion that the relationship isn't what she wants or needs and will cut ties.

I am slightly worried that something awful is going to happen, though. What if Molly gets pregnant? I honestly don't understand how a couple in an open relationship would deal with something like that. I hope things don't go in this direction because I want the best for Molly, but ... it would potentially make for compelling TV. Even if Molly doesn't get knocked up, I feel like a confrontation with Dro's wife is right around the corner. We do get confirmation that Candice (Gabrielle Dennis) knows Dro is sleeping with Molly, which is something I had wondered about for awhile.

With so many storylines up in the air this season, I'm excited to see how it all unfolds. Here's to hoping that "know better, do better shit" carries through all 8 episodes and helps Issa and Molly break old, bad habits. 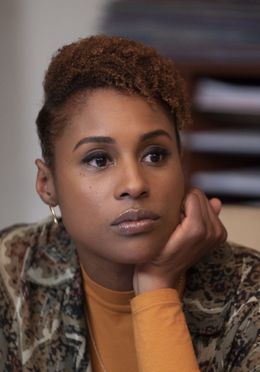 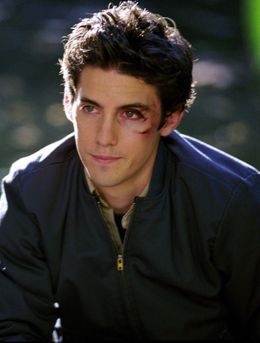