Directing and writing credits:
Directed by Gail Mancuso, written by Daniel Palladino. Mancuso has directed two prior episodes of "GG":

"Red Light on the Wedding Night" - Lorelai has a few Long Island iced teas and decides that maybe she's not ready to commit to the same dick (literally and figuratively) for the rest of her life.
"Lost and Found" - Jess is a surly little pissant, but he wears a Punk Planet shirt for most of the episode which makes it difficult for me to hate him. Dean still sucks.

This is my favorite episode written by Daniel Palladino because it is wild. Seriously. Who are the Springsteens? They're cannibals or robots, right? I love him for bringing them into the "GG" universe.

Most batshit crazy outfit:
Lorelai wears a few ugly peasant blouses, debuts a long red purse that looks like a sausage, and sports a pair of pants with vertical stripes, but nothing is offensive enough to deserve the "batshit crazy title." This time, I must award it to Lane for her "Trust God" t-shirt. Even though she didn't wear it of her own accord, I can't forgive it. It's like a more in-your-face version of the Jesus fish decal that horrible drivers decide to put on their cars. 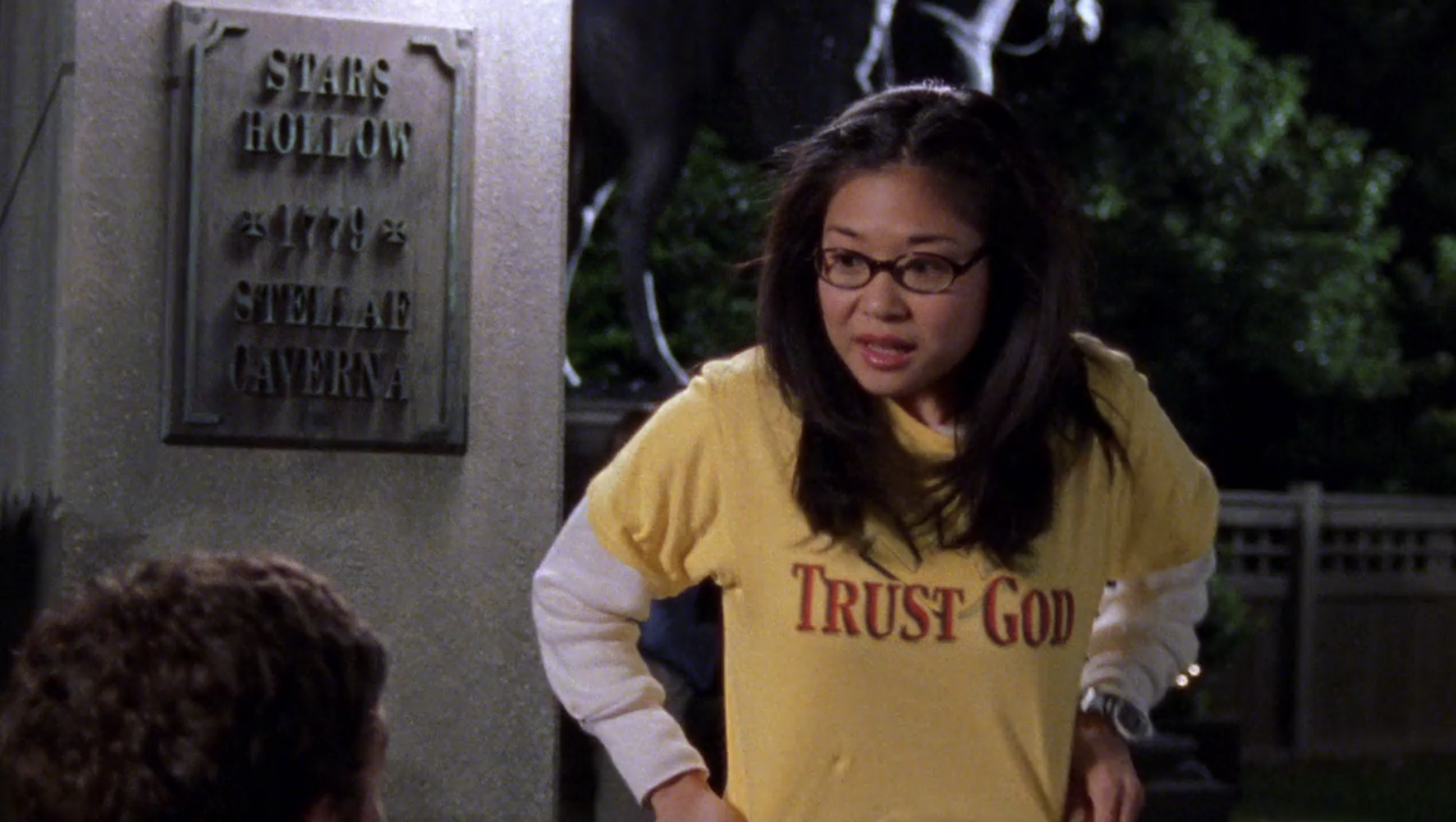 Tell Mrs. Kim this is the last straw; you're ready to file for child emancipation.

Most irritating Rory or Lorelai moment:
Compared to the Springsteen family, Rory and Lorelai are chill and pleasant. There is one annoying exchange between them where Lorelai beats an unfunny joke into the ground, but it's kind of worth it to hear Rory's clever retort:

Lorelai: And nickname, if any.
Rory: That would be Rory.
Lorelai: Or Droopy Drawers.
Rory: That was never my nickname.
Lorelai: Wrong, I called you that as a baby.
Rory: What?
Lorelai: That’s right. You had these little OshKosh cords and they were way too big and once at the mall, they fell right down to your knees and I said, "Whoa, there, Droopy Drawers!" – and I’m just afraid if we don’t answer everything accurately, the Harvard police will come and hit you with an atlas and say something mean in Latin.
Rory: How would they know that you called me Droopy Drawers?
Lorelai: Well, we could be at a Harvard event and I could slip up and say, "Pass me a lobster puff, Droopy Drawers," and they could hear me, and that’ll be that.
Rory: How ‘bout you don’t drink at any of these Harvard events?

The amount of dialogue in this show doesn't typically bother me, but I want to scream and cover my ears whenever Lorelai blathers on idiotically about something no one else cares about.

Number of times Rory or Lorelai treat their bff like shit:
None. Rory and Lorelai let Lane use their house as HQ for her drummer-seeks-rock-band ad and they even field calls for her when she's not available.

Best literary or pop culture references:
I guess it's plausible that Taylor watched Stacy Peralta's "Dogtown and Z-Boys" and found it especially shocking.

Luke: What are these?
Taylor: Surveillance photos of town goings-on, the dark side of Stars Hollow, Luke – not a pretty picture.
Luke: These are kids on skateboards.
Taylor: Slaloming around pop bottles right down the middle of the street. I’m telling you, Luke, if we don’t quick furnish these skateboarding z-boys with a moral distraction, they’re gonna turn Stars Hollow into Dogtown.

Luke is a poor, tortured soul in this town. 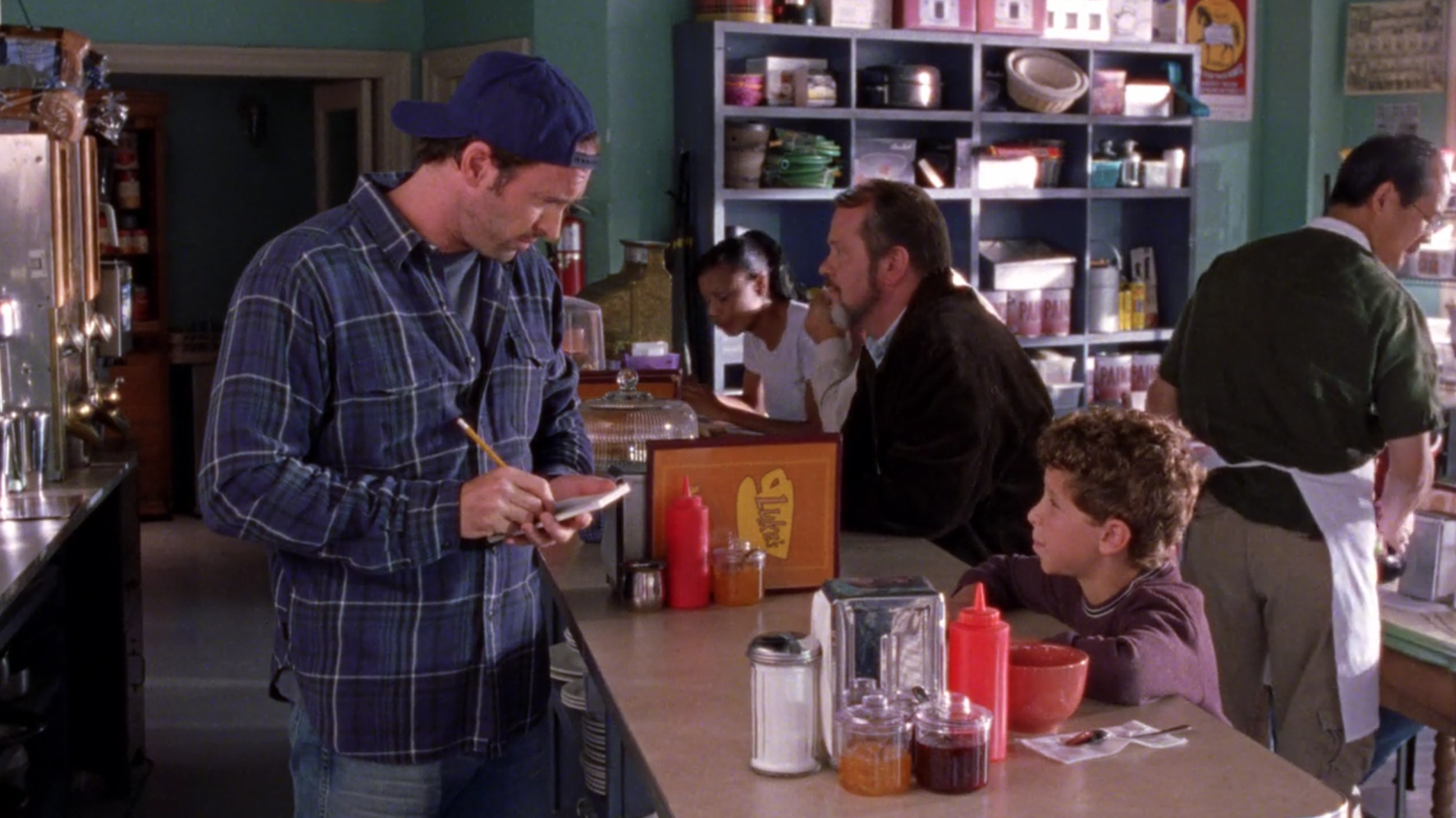 "As long as the ice cream’s made the old fashioned way – on the premises."

Stars Hollow weirdness:
In order to convince Luke that Stars Hollow needs a soda shop, Taylor sends a barrage of tiny ghost children (and Kirk) into the diner to ask for specific treats, like black cows and egg creams. Ultimately, Lorelai's stamp of approval at the town meeting is enough to convince Luke to cave to Taylor's desires.

Oh, and of course Kirk is first in line to apply to Luke's hypothetical skateboard and pop bottle shop.

Sharpest insult or one-liner:
Lorelai's critique of Jack and Jennifer's relationship is funny, but I think it's more likely that they left to clean up a dead body.

Lorelai: Did they just leave to take a shower together?
Rory: Oh, gross!
Lorelai: What? They bounced in together, they bounced out together.
Rory: New topic.
Lorelai: Can’t take gritty reality?
Rory: Or slanderous postulating.
Lorelai: And how is it they just came off the tennis court and they’re not even sweating?
Rory: I don’t know. Maybe when you’re that white, you don’t sweat.

You're one to talk, Rory. You live in the whitest town in America and are the picture of white privilege. But okkkkkkay.

Books mentioned/books Rory is reading:
Rory is watching "The Brady Bunch Variety Hour" when her Harvard application arrives, but tells the Springsteens she was reading "Dead Souls." I don't understand why anyone would lie about such a boring thing, but I guess her pretentious ass found it necessary.

The Springsteens mention a bunch of Shakespeare during their weird lunch quiz: "Macbeth," "Henry IV, Parts I & II," and "The Merry Wives of Windsor." I took two classes on Shakespeare in college but couldn't answer any of the trivia questions if my life depended on it. Rory also mentions "The Manticore" at the same dumb lunch. 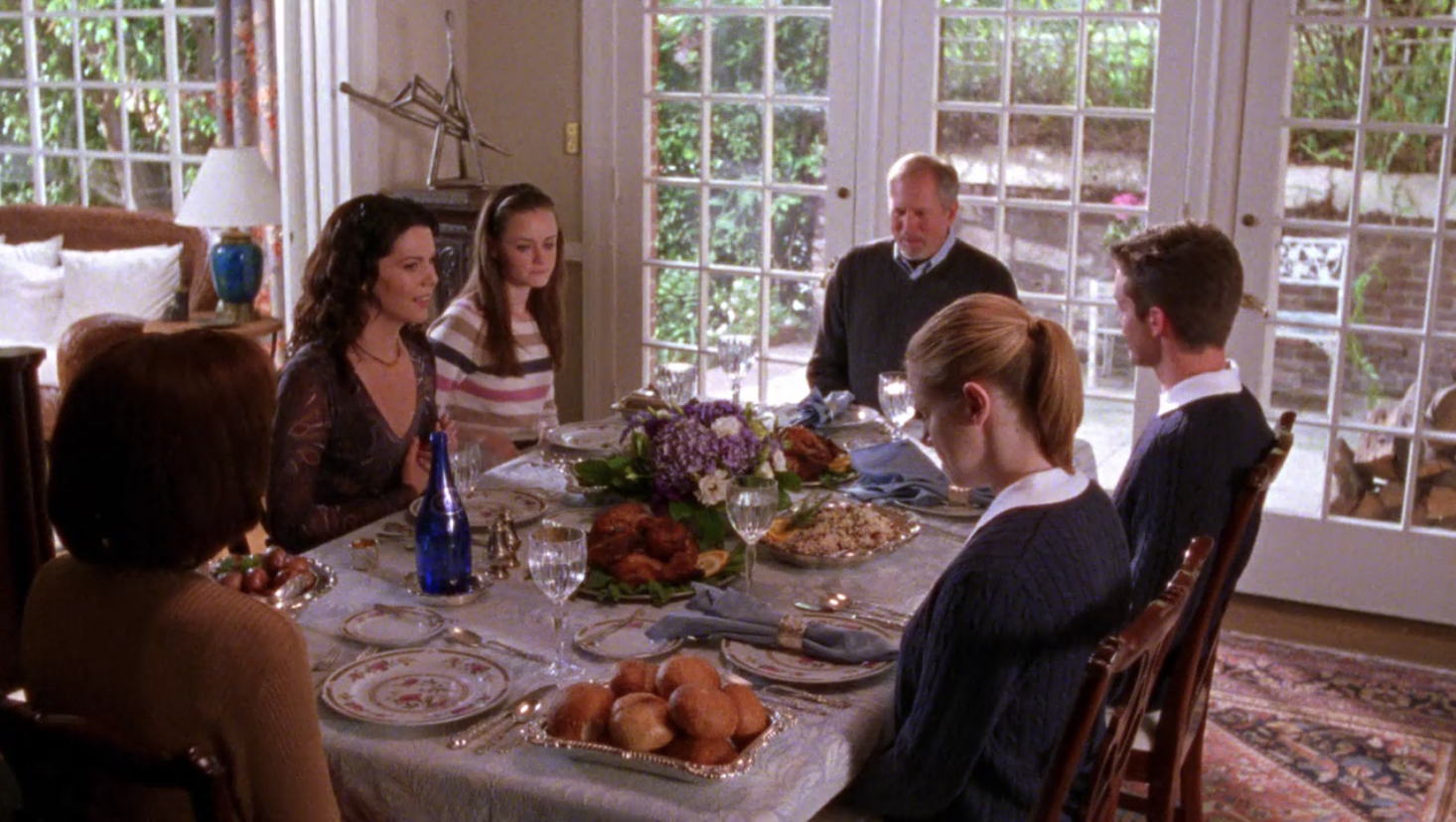 These people are a nightmare come to life, but that lunch looks dope.

Best song of the episode:
All of the music references make me extraordinarily happy. Thanks to Lane Kim, I discovered some of my favorite bands at the exact right age. I love the usage of both Modest Mouse's "Tiny Cities Made of Ashes" and Tom Waits's "Big in Japan." I tried to catch all of the musical references throughout the episode, but I'm probably missing some:

Thoughts:
There are so many things to say about this episode that I don't even know where to begin. Rory's Harvard application finally arrives and she and Lorelai treat it like it's the fucking US Consitution. Lorelai babbles on idiotically about hypothetical answers to extraordinarily simple questions and Rory somehow refrains from punching her in the face.

At Luke's Diner, Rory tells Dean that she's totally not freaked out about the application because she already knows she's going to write her essay on Hillary Clinton. I think Dean realizes deep down that this is bullshit. Rory freaks out over everything school related; nothing is ever simple with this over-achiever. The way she kisses him whenever she leaves for school is a clear indication that their relationship is done. It's the saddest, most passionless kiss I've ever seen, but Dean is desperate for any little crumb of affection Rory throws his way, so he doesn't notice.

Everything is fine until the college admissions panel, when Rory finds out that her basic bitch answers might not fly with the snobs at Harvard. Granted, the panel is full of assholes who clearly hate their jobs and want to ruin the lives of every student in the audience.

Mr. Romaine: Well, small thing, but if your printing is bad, that says something we don’t like. If your extracurriculars and volunteer activities are too by-the-book, that says something we don’t like.
Ms. Samuels: Yes, those activities should have a personality behind them – a focus, a direction. I’ve seen applications where the student has circled every activity listed. Again, you’re trying too hard there. One can’t be interested in everything.

If I were advising Rory, I'd tell her to curate the right impression on her college application with a combination of fact and truth. Don't worry about whether you have the right qualities, just invent them when necessary! Now that the Internet is so prevalent, kids probably can't get away with blatant lies, but then again ... words have no meaning in 2018, so maybe I'm wrong. 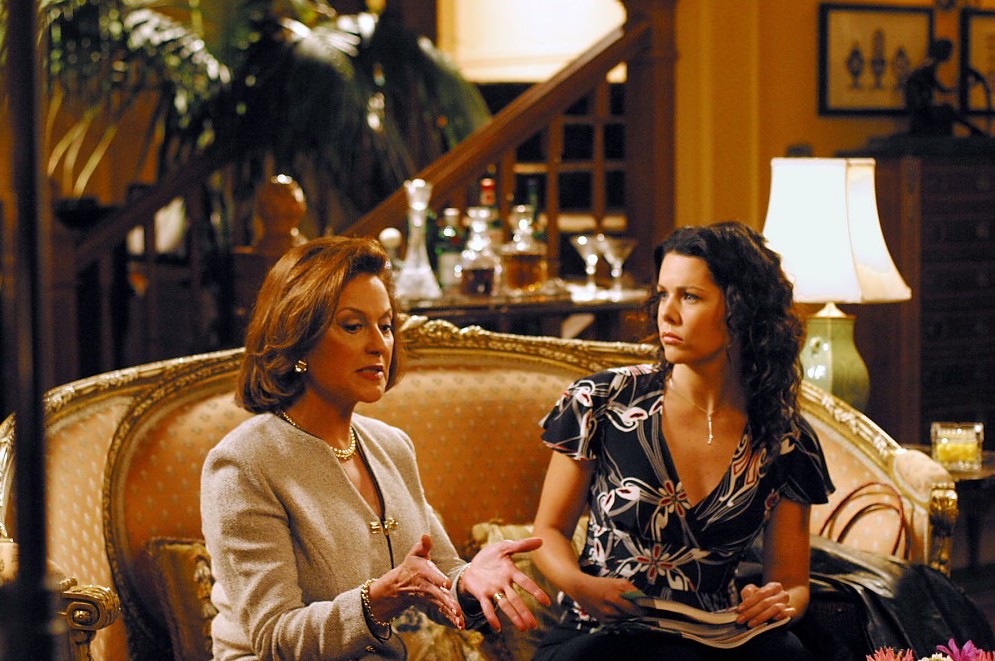 Emily: And now it’s the in thing for young Hollywood celebrities to go to universities. What do they call themselves, the Brat Pack?
Lorelai: About a hundred years ago.
Emily: They get into wherever they want based on name recognition. I was watching TV and that insipid Kate Hudson was talking about going to a university. If she decides to go to Harvard, she’ll get right in over Rory, who we know is more qualified.

What do these people have against Kate Hudson? She seems fine to me 🤷🏻‍♀️.

Since Rory and Lorelai are now collectively freaking out about the application, they decide to consult Headmaster Charleston, who suggests a lunch with a Harvard alumnus who will answer all of their questions. The man they meet with is Darren Springsteen, class of '74. He is, without a doubt, a serial killer, a cult leader, or maybe both?

Here's what we know about Darren: 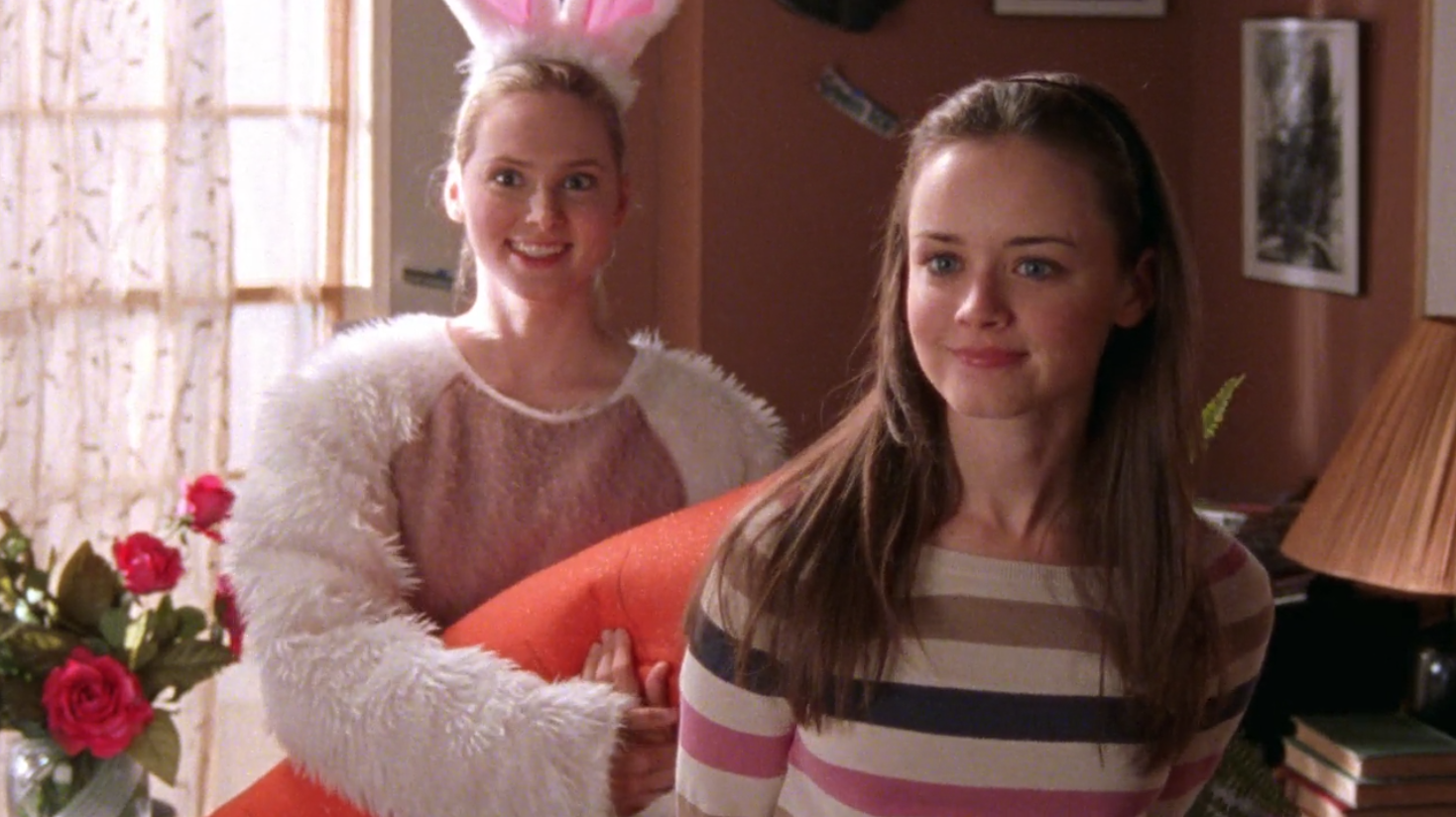 This might be the creepiest smile I've ever seen.

And don't even get me started on Carol. Does this chick think she's going to be a birthday bunny forever? She should make her rich parents pay for her to go to art school. There's an easel in her bedroom, so she must at least dabble in painting. If she really wants to tell her parents to go fuck themselves, she should do it by making them overpay for a fine arts education and then supplement her income while she works as a minimum wage gallery assistant in an expensive city. You really want to stick it to the man, Carol? Bleed your parents dry while you spend 4 years doing lots of cocaine and having sex with anyone attractive. That will give them early heart attacks, for sure.

I know this exchange with Carol is supposed to make us realize how grateful Rory is that Lorelai supports her dream and doesn't try to force her to follow a particular path, but it just makes me angry. And also, I don't believe for one second that Lorelai would be totally chill if Rory decided to forgo Harvard and drive a forklift at Wal*Mart. The whole thing is fucking stupid and sloppy, typical of Daniel Palladino at his worst.

The best thing about this episode is the appearance of Dave Rygalski, who is by far the best boyfriend in the history of this show. Sure, he and Lane have a very typical high school romance where they like each other because of common musical interests, but he's also sweet and willing to do some pretty crazy shit for her (like read the entire Bible in one night).

Don't be sorry Seth Cohen/Dave Rygalski. You're perfect just the way you are 💘. 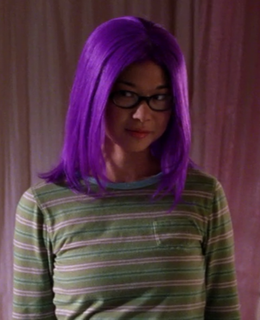 Interview with William E. Badgley on His New Documentary, 'Here to Be Heard: The Story of the Slits' 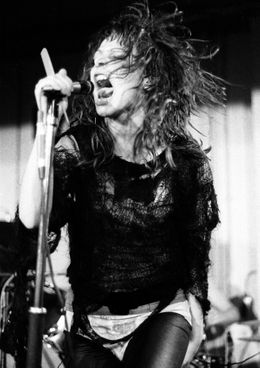