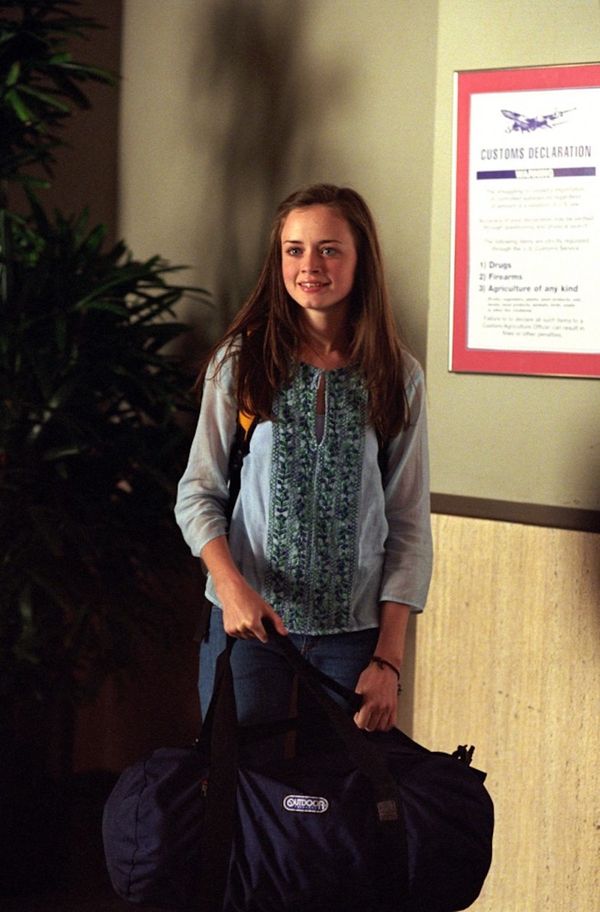 Directing and writing credits:
This season opener was written and directed by Amy Sherman-Palladino. It features cameos from Barbara Boxer and Doug Ose, of all people.

I actually met Barbara Boxer in 2007 when I was in Washington, D.C. for Presidential Classroom, something similar to Chilton's Junior Leadership program. I forget what I talked to her about, but I do remember that she kind of blew me off just like she did with Paris. I don't blame her because I'm sure talking to high school students all day was the opposite of fun.

Most batshit crazy outfit:
There are a bunch of worthy candidates in this episode, but this is the one that makes me rage hardest: 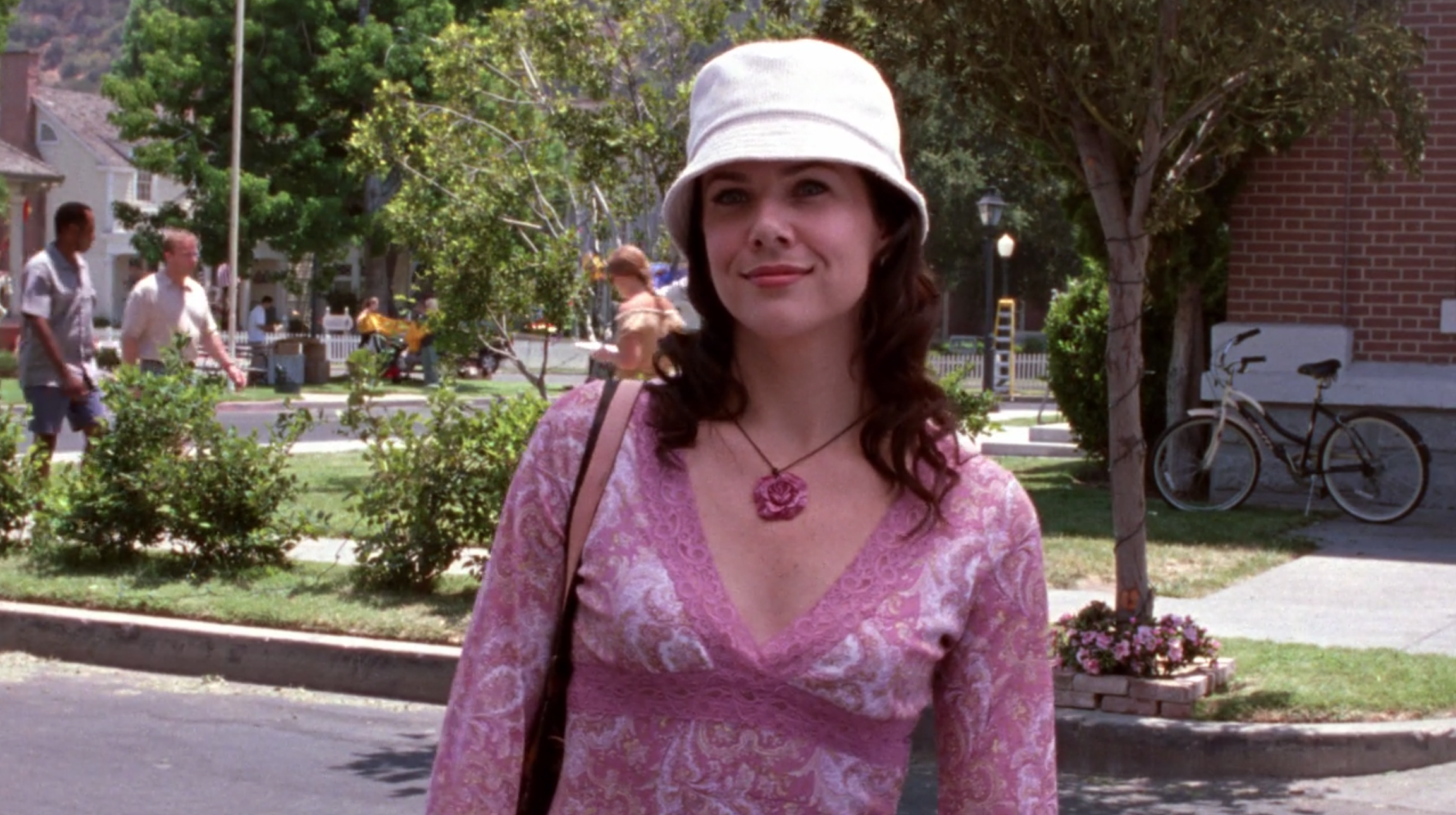 Lorelai is wearing a white, terrycloth bucket hat, a polyester caftan that definitely is not suitable for summer heat, an enamel rose necklace, a pair of gold kitten heels with a bow, and a black (maybe brown?) leather bag. She looks like Amber Mariens on meth and I do not approve.

In the dream sequence before the credits, Lorelai wears a nightgown that she later describes as "fabulous" but it is actually a travesty. It makes her tits look AWFUL (similar to the aforementioned outfit) and has so many fucking ruffles.

Later, she wears a pair of low-rise jeans that are one bend away from ass crack exposure. I could seriously spend this entire recap talking solely about how horrendous all of the outfits are. (Dean's striped polo shirt, deep tan, and signature necklace!)

Most irritating Rory or Lorelai moment:
Lorelai probably spent $150 on stupid Hartford airport gifts for Rory. She buys her the following: a sweatshirt, notebook, pencil set, shot glass, beer mug, baguette, bear, and sunglasses. WHY? Lorelai should have saved that money for Rory's college fund or something that isn't completely idiotic and wasteful.

Number of times Rory or Lorelai treat their bff like shit:
None. Sookie is annoyingly obsessed with redecorating her house to make it look more "manly" for Jackson and Loreali tries several times to talk her out of it. She even offers Mrs. Kim $10 to stop Sookie from buying an "antique stuffed and mounted trout." Of course, Mrs. Kim counters and demands $20 (good for her).

Sigh. If only. Lorelai is awful, so idk why I want her to reproduce with Luke so badly. I guess this show has managed to manipualte me after 5,000+ viewings.

Stars Hollow weirdness:
Kirk has a new venture (because of course he does) called "Hay There." It's "a complete line of creams, balms, toning lotions, and cleansing liquids" that he later has to recall because "with continual use, the cream develops some weird reactions to light ... and air ... and movement."

And of course, there's the first annual Stars Hollow End of Summer Madness Festival, complete with a big city band that sings "Those Lazy-Hazy-Crazy Days of Summer" ad nauseam.

Sharpest insult or one-liner:
I was going to say this exchange made me lol, but that would be a lie; to say it amused me is more accurate.

What do you think is the most adventurous drink order Emily and Richard could fulfill? My money's on a gin fizz.

Books mentioned/books Rory is reading:
When Lorelai comes home from Luke's diner at the end of the episode, Rory is holding a copy of "A Bolt from the Blue and Other Essays" by Mary McCarthy. After Christopher's phone call, Lorelai references "Divine Secrets of the Ya-Ya Sisterhood" by Rebecca Wells.

Best song of the episode:
The only song in this episode is "Those Lazy, Hazy, Crazy Days of Summer" and I refuse to say it's the best. Does anyone actually like this song? Listen to it once and it will follow you around for WEEKS. The only way to get rid of it is to replace it with another, equally awful earworm. Lorelai recommends ""It's a Small World (After All)," but I'd personally go with "Que Sera, Sera (Whatever Will Be, Will Be)." This song plays in "Secrets and Loans" and ruins my life every time.

Thoughts:
My husband watches so much "Gilmore Girls" and I don't even feel 1% bad about it. Actually, I kind of do. His job is far more stressful than mine and I should probably just let him come home from work and veg out to random sailboat videos on YouTube, but I can't do that. His commentary brings me too much joy and I must force him to finish the show with me.

At the beginning of this episode, he was like, "What?! Luke and Lorelai are together? How many episodes did I miss?!" As was their intention, the Palladinos successfully bamboozled him with the opening dream sequence. 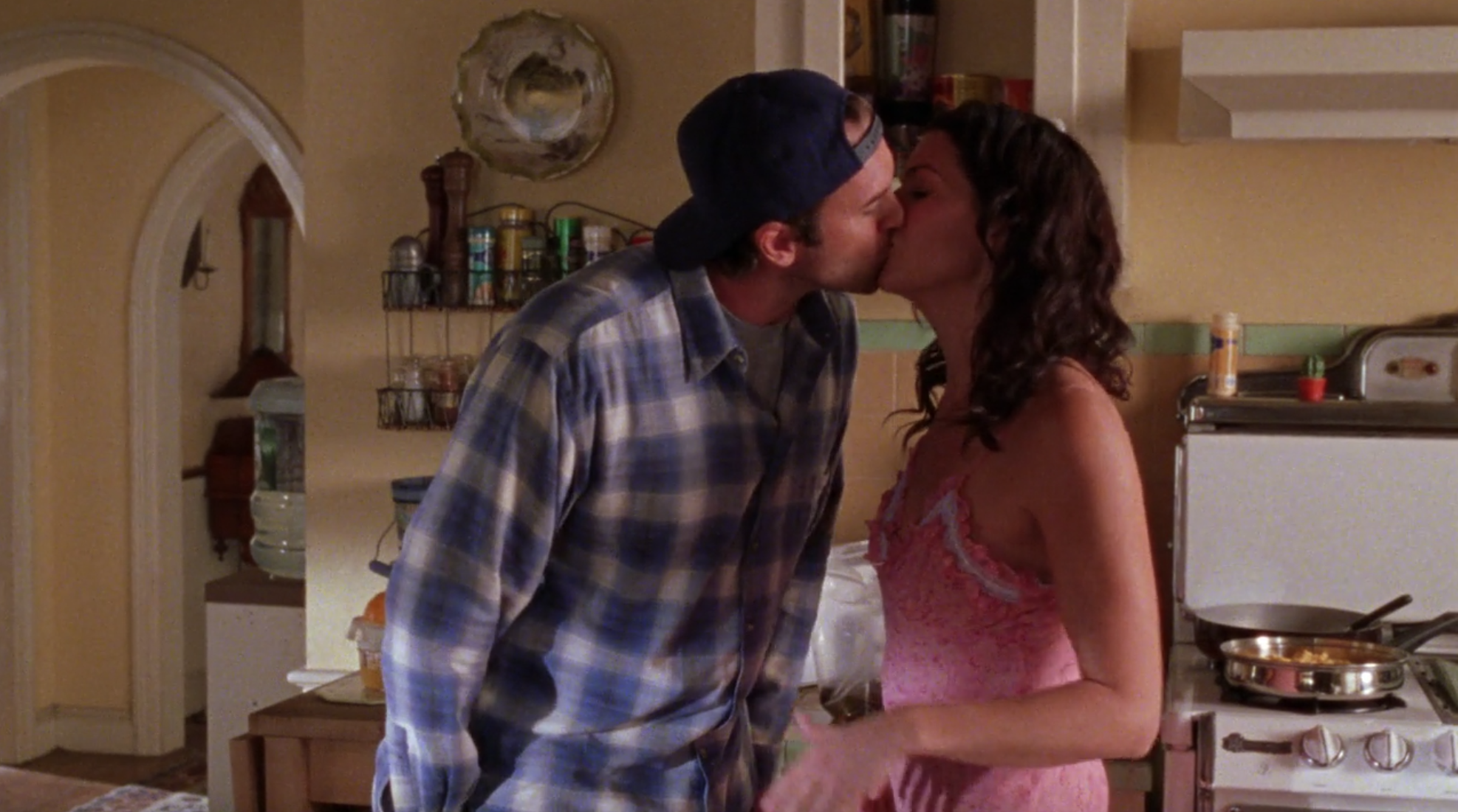 Luke and Lorelai have so much chemistry and their dynamic is immediately believable, from the jokes about decaf coffee to the three goodbye kisses. I've mentioned it before, but I think the writers do a good job of slow-rolling their inevitable romantic relationship. Even though we'll have to wait another FORTY-TWO episodes until they get together, at least they've thrown us a bone and given us a glimpse of what things will eventually (sort of) look like in the future.

It also makes sense that Lorelai would have a dream about babies and Luke. Sherry's pregnancy and an entire summer sans Luke's cheeseburgers are probably top of mind for Lorelai, along with Rory's absence. This summer has probably been a lonely one for her and all things considered, she seems to be doing relatively okay ... until the end of the episode, at least.

Lorelai has always regretted (or felt badly about) Christopher's absence in Rory's life. As much as I disagree with her decision to freeze him out and encourage him to jump back into his relationship with Sherry, I understand it. Christopher has the chance to be a good, involved father instead of a deadbeat and Lorelai doesn't want to see another woman and child struggle the way she and Rory did. She's not happy about it, but she does love Christopher and wants him to do the right thing ... to have learned his lesson after seventeen years of idiocy and selfishness.

This conversation between Emily and Richard causes Lorelai to wordlessly walk out of the house, go to Luke's diner, and lay her soul bare:

Richard: Christopher is living up to his responsibilities as he tried to do many years ago with Lorelai, then she turned him down and turned him away.
Lorelai: I was sixteen.
Richard: If Christopher has found someone who will actually allow him to be a father to his own child, then of course, that’s what he’s going to do.
Emily: So you support this?
Richard: I understand this.
Emily: I am appalled by your attitude.
Richard: And I am shocked by your naïveté. Did you really expect this to work out? Did you really have pictures of Norman Rockwell family Christmases dancing in your head? Lorelai had her chance for a family, she walked away from it. That was her choice. He has a chance to be a father. I applaud him.

Wow. So since she refused to marry Christopher, it was okay for him to disappear and act like Jack Kerouac while Lorelai raised their child alone? Last episode, I said that in the "GG" universe, situations are constantly painted in black and white with zero grey area. This conversation between Emily and Richard is a perfect example of this type of no middleground faulty reasoning.

The scene at the end between "Mimi" and Luke feels deserved and not at all manipulative, although I think it could have easily come off that way. Whenever Lorelai walks into the diner, she's looking for comfort from a friend and Luke sees almost right away that she is truly distressed and not just fucking with him.

While Lorelai deals with her legitimately tough situation, Rory manufactures one of her own. At this point, she knows how she feels about Jess (she kissed him at Sookie's wedding FFS). It's totally obvious whenever she tells Paris how she'll know a guy is right for her. She says he'll be "Someone who likes what you like, someone who reads the same books or listens to the same music or likes to trash the same movies. Someone compatible." You mean ... someone not like Dean? 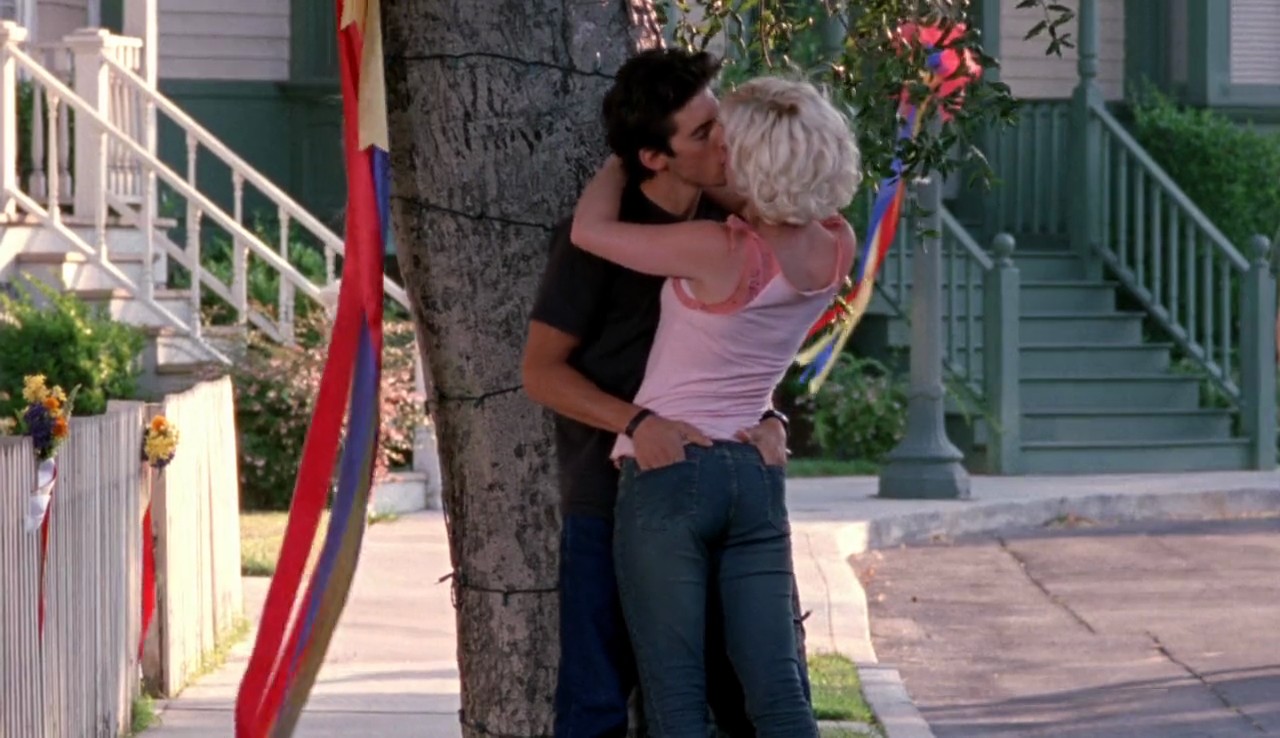 Jess is 🔥🔥🔥. I would spend a summer making out with him, no strings attached.

Whenever she returns to Stars Hollow and sees Jess kissing Shane at the festival, she's upset and Lorelai rightfully calls her out on her bullshit (but then backtracks a bit at the end of the episode, which is annoying). Lorelai says,

"Look, kid, you have gotta make up your mind. Jess, Dean, Jess, Dean – it’s enough already. If you want Jess, that’s fine – go get him, there he is. If you think that’s the great love of your life, then great ... grab a liver treat and a squeaky toy and run to him. Don’t worry about that girl because I’m sure he will have moved onto somebody else in about an hour. But do something. Dean has been sweet and supportive and incredibly patient, and now you are officially treating him like dirt, and I’m sorry, but not only is that not you, he doesn’t deserve that."