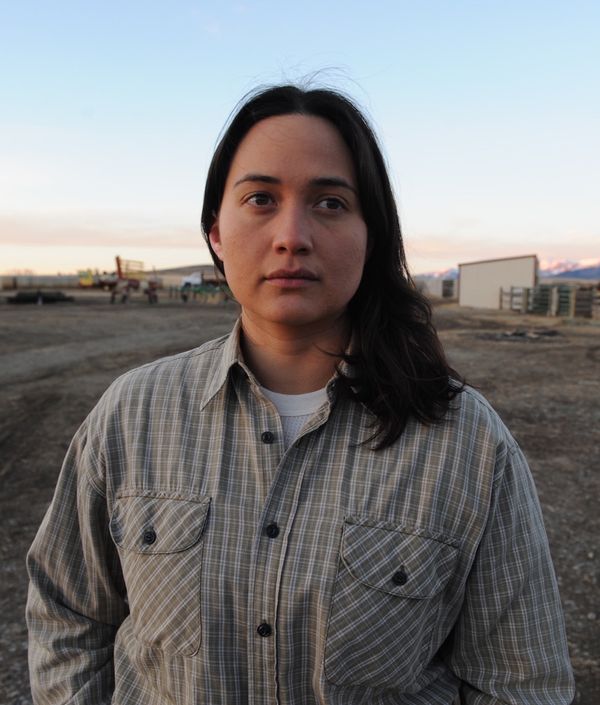 Vibe:
Lonely, desolate, and repressed. The three women in this film sure as shit aren't sharing their internal dialogue with us via voiceover. They're used to being misunderstood and are done trying to make anyone understand: not us, the viewers, and certainly not their male counterparts.

Best time to watch:
Whenever you'd like to be in the company of women. Not perfect women, but ones with flaws... ones who understand what it's like to live in a world where their stories and thoughts are consistently marginalized and men are always more important. Maybe you should watch when you're angry about Paul Ryan's agenda to defund Planned Parenthood or when that dude at work steals your opinion and is praised for passing it off as his own. This film won't make you feel better about any of that, but it will make you think - about why the fuck this keeps happening and if there's anything you can do. That's what it did for me, at least.

Why you should watch:
For some inexplicable reason, no one pays attention to Kelly Reichardt, but she's made 6 thought-provoking feature length films and has been around for quite awhile. She's also one of those filmmakers who somehow has the talent and stamina to write, edit, and direct (she holds all of those credits on "Certain Women," along with 4 other films). Anyone who has worked on their own film projects knows that this is no small feat. This is also her third film with Michelle Williams, one of the best, hardest working actresses in the industry. Kristen Stewart, Lily Gladstone, and Laura Dern also slay. I really hope to see Lily Gladstone in more films in 2017, because she has a beautiful, emotive face and is impossible to stop watching. I love Kristen Stewart, but Gladstone dominated every one of their scenes together.

Where to watch:
As of right now, you can't watch this film online anywhere, but I think it should be released to DVD sometime next month. I'll update this whenever I know for sure.

Quick summary:
Based on three stories by Maile Meloy, this film gives us a glimpse at the lives of four women: Laura (Laura Dern), Gina (Michelle Williams), Jamie (Lily Gladstone), and Beth (Kristen Stewart). All women live in Montana and have a hard time finding happiness and expressing feelings. Although this really isn't a Western in the traditional sense, the setting and overall vibe make it feel like one at times.

Thoughts:
There are many people who dislike "Certain Women" and have written it off as disconnected bullshit and/or a movie about nothing. I understand this opinion, but I disagree with it. Mainstream movies like "Love Actually," "Pulp Fiction," and "Cloud Atlas" (along with that racist shitstorm, "Crash") have conditioned us to expect that any disparate cinematic stories will coalesce in some unexpected, mind-blowing way. I will save you the trouble and let you know that "Certain Women" doesn't do that; it's not that kind of film. The characters and their stories are linked, but only tangentially. If this were a more traditional film, there would probably be a climactic confrontation between Laura and Gina and we would find out at the end that Laura is actually Beth's mom. But none of that happens, so please set those expectations aside.

Laura, Gina, Jamie, and Beth are connected by the wild, sprawling Montana mountains and their markedly female experiences. Laura, a lawyer at a small firm in Livingston, is forced to deal with an annoying client named Fuller (Jared Harris) on what feels like a daily basis. Fuller is a victim of some sort of work-related accident that resulted in a permanent neurological disability. Laura has explained the futility of taking legal action against his former employers, but he won't listen to her. Eventually, she sets up a meeting with another (male) lawyer who reiterates everything that she has already told Fuller. Instead of arguing with him, Fuller simply listens and says, "okay." When she's in her car after the meeting, Laura reflects on this exchange in a phone conversation with Ryan (James LeGros):

It'd be so lovely to think that if I were a man, I could explain things and people would listen and say, "okay." It would be so restful.

If I had a dime for every time I voiced the same opinion, I would have a Scrooge McDuck-sized pile of dimes.

Although she's obviously annoyed with him, Laura doesn't tell Fuller to fuck off when he hops into her car (uninvited) and asks for a ride. Nor does she make him leave when he says this crazy shit:

No one understands one fucking thing. The only thing left to do is get a machine gun and kill everyone.

When Fuller takes a security guard hostage at his former workplace, Laura is the one who enters the building and reasons with him, not the cops. She stays calm and de-escalates the situation, even though it seems far outside her responsibility as his lawyer. Despite Fuller's annoying, misogynistic, stalker-ish behavior, she still empathizes with him. The shot of Laura's face as she watches him in the cop car is devastating - a mixture of sadness and pity. Regardless of how shitty a person is, it's hard not to feel sorry them when they're so desperate and helpless.

After 30 minutes of Laura's story, we move on to Gina's. Of the three stories, I felt this one the hardest, even though it lacked the detail of the other two. At the start, we find out that Laura's husband is Ryan, the man who Laura was having sex with in the previous story. They have a daughter named Guthrie (Sara Rodier), a stereotypical surly teenager who is probably rebelling against her parents because they gave her a massively stupid name.

When we first see her, Gina is wearing running clothes and smoking on a dirt path in the woods. The thorough way she stubs out and covers her cigarette suggests to me that she doesn't want anyone to know what she's been doing. When she gets back to the tent where her husband and daughter and staying, the vibe is not warm. She tries to make casual conversation with them about the coyotes that she heard the previous night, but irritation is bubbling directly under the surface of her small talk. Things seem especially strained with her husband. Their dynamic isn't playful or romantic and she obviously thinks his crab pose is idiotic (and I agree with her). She doesn't seem even remotely happy with her situation.

The one thing that does seem to interest her is going to see Albert (Rene Auberjonois), an elderly man with a bunch of old sandstone on his property. We learn that Gina and Ryan are building a house; Gina wants it to be "authentic," so they're trying to find old/scrap materials to repurpose for the new place. It's very clear from the start that this is Gina's project and Ryan is simply along for the ride, doing what he's told because he feels guilty about having an affair. When they talk to Albert about the possibility of buying the sandstone, it's like Gina isn't even in the room. Albert only cares about what Ryan has to say, and Ryan isn't doing a very good job of acting as his wife's mouthpiece. Ryan continuously reiterates that it's okay if he doesn't want to sell the sandstone even after Albert has already said that he's fine with selling it to them.

Albert reminds me of my racist, misogynistic paternal grandfather. I stopped speaking to him 8 years ago after he told me that "giving women the right to vote is the worst thing that's ever happened to this country." He sits alone all day, listening to Fox News and wondering why no one wants to come spend time with him. Do you know why no one wants to spend time with him? Because he's an asshole. It's not confusing. He gives me money for Christmas and my birthday every year and I willingly accept it. I write him the perfunctory thank you note, but I don't feel indebted to him. I won't visit him and I won't go to his funeral when he dies (unless my dad asks me to).

I think Gina feels the same way about the sandstone. She asked if she could have it and he said yes. She offered to pay him for it and he ignored her offer. She owes him nothing further. When he watches her loading up the sandstone at the end of the story, the look in his eyes suggests that he regrets the offer and had expected something more. I would guess that because he gave her the sandstone, he expected her to care about him, to check up on him occasionally to make sure that he hasn't fallen again. Women are often stereotyped as maternal caregivers. We're seen as empathetic creatures, as Laura figures who can't turn off our need to help other people, even when they treat us poorly or don't respect us at a base level. Not all of us are like that, though. Some of us have been scorned or suppressed so many times (by our husbands or other men in our lives) that we're done giving a fuck, apologizing, or asking multiple times for permission we've already been granted. No one should judge us for this, but they do.

The third and final story centers on a Native American farmhand named Jamie. Her days are repetitive and solitary - care for animals, watch television, brush teeth, sleep. The only thing we really know about her is that she must be monumentally lonely. One evening, she goes into town and wanders into a class about education law, taught by Beth, a young lawyer who drives 4 hours from Livingston to get there.

Beth and Jamie form a casual friendship, stopping at a diner after class before Beth's long drive home. Jamie never eats anything, just sits and listens to Beth talk - mainly about her job as a lawyer and her fear of failure. It's clear to me that Jamie is desperately searching for human connection. She's always alone and these conversations with Beth are the only ones we see her have all week. Beth is so self-absorbed that she really doesn't force Jamie to talk or make her feel awkward about never eating anything at the diner. Beth is the kind of awkward, intellectual introvert who worries about pauses in a conversation; Jamie is the type who is happy to listen and only offer up commentary when it's meaningful.

After Jamie brings her horse to school and gives Beth a ride home from the diner, there's a moment where she obviously wants to say or do something. When Jamie grabs her scarf, Beth seems to suddenly realize her intentions and abruptly leaves. When she doesn't come back to class the following week, Jamie drives the whole way to Livingston in an attempt to locate her. When she finally does, with the help of the secretary at Laura's law firm, she's unable to say anything meaningful. Jamie's actions make her feelings clear, but her inability to speak the words gives Beth an easy exit. Beth clearly doesn't want to hurt her feelings by saying the wrong thing, but she probably hurts Jamie more by saying nothing.

The interesting question is whether this interaction with Beth will a) turn Jamie into a jaded human being who is done trying to open up to people or b) encourage her to improve her communication skills and ensure that her feelings are heard, even if they're not reciprocated. I hope it's b. Unlike Laura and Gina, Jamie isn't surrounded by misogynistic dudes who are trying to fuck with her mind and dampen her spirit, so maybe there's hope.