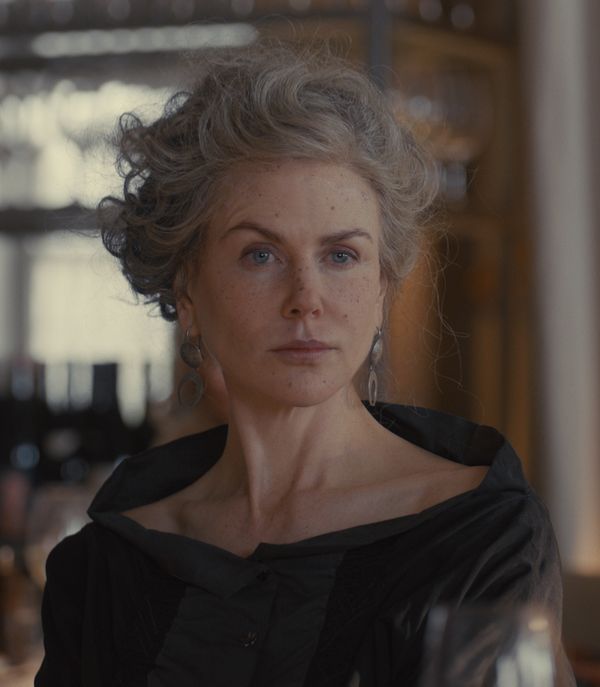 Today I saw a review on The Atlantic with this subheading: "Elizabeth Moss, Nicole Kidman, and Gwendoline Christie star in a returning series gone very wrong." Admittedly, I haven't finished the season yet, but after an episode like this one, I'm pretty shocked there's so much bad press about "Top of the Lake: China Girl." Episode 3 is the strongest of the season so far and maybe even the best of the entire series. As Mary unwrapped her present from Robin to reveal a new Breville sandwich toaster, it felt like a fucking mic drop. I pictured Jane Campion lowering her signature sunglasses and whispering, "checkmate," before slinking off into a dark shadow.

This episode was directed by Ariel Kleiman and once again, I'm impressed. I understand the critics that miss the wonderful, sweeping shots of New Zealand wilderness, but they need to get over it. This show isn't married to that setting and I think it works just as well in Sydney. The magical realism isn't as prevalent, but the strangeness has been dialed up to an 11 in exchange. I'm already sick of reading about the comparisons to David Lynch, but they're pretty valid. The plastic, shrinking tiny baby certainly would have made him smile.

When asked what film makers are most important to her, Campion enthusiastically mentioned David Lynch, Jim Jarmusch and Bernardo Bertolucci as most influential. “I am very openhearted when it comes to filmmakers. From the moment I started watching films I felt like it was the greatest thing ever.” The thing that resonated most for Campion was that these filmmakers were “telling stories that were really interesting about simply being human.”

To me, "Top of the Lake" does exactly this: tells a story about being human... and more specifically, about being a woman.

As soon as the episode began, I knew there were going to be a ton of ignorant, hastily written pieces of criticism about it. The Guardian asks,

Why didn’t Robin leave the room? Were we supposed to think that her fear of Al Parker had left her paralysed? Why would he strangle her in a police station - surely he, of all people, would know that the rooms have cameras in?

Excuse me while I go bang my head on the table. I love that Rebecca Nicholson, the author of this piece, asks these questions but doesn't bother to think about them at all. I wish she had paused to consider that maybe Jane Campion made all of these choices for a reason. When it comes to sexual assault, how many times do we hear bullshit excuses like, "Well... she should have pushed him off!" All the fucking time. But does it matter that she didn't push him off? Does it matter that Robin didn't run? NOPE. She's not at fault because she didn't run. Al Parker is at fault for attacking her. He made the bad choice, not Robin. Let's focus on him.

And did Al Parker know that there were cameras in the police station? Yeah, I'm sure he did. But Al Parker is also a white man who is about to skirt child pornography/abuse charges because of some lame technicality, so I'm sure he thinks he's invincible. Society has taught Al Parker that it's okay to abuse women and children. The world belongs to his kind and nothing is off limits. Donald Trump is the President of the United States, after all. President pussy grabber. But that's okay. Nbd. Remember when Donald Trump made this comment?

I could stand in the middle of Fifth Avenue and shoot somebody, and I wouldn't lose any voters, okay? It's like, incredible.

It's true. For once, he made a true fucking statement. I would, however, add an asterisk to "somebody." Somebody would have to be a person of color, woman, immigrant, or other marginalized group. Somebody couldn't be another white man. Shooting another white man might cause problems for him.

The scene with Al Parker at the end of the episode is a visual depiction of oppression. Robin has been emotionally manipulated and sexually assualted by this man. She knows he abuses children and profits from it. She's had to deal with the emotional trauma of shooting him, even though it was the right move. And now, she's being forced to defend herself in front of a bunch of people who don't even pretend to be on her side. If you need a reminder, here's how the conversation with Paul Chen, the Chief Police Council, went down:

Adrian: [After introducing Paul] He's got a bit of a delicate question in preparation for Thursday.
Robin: What? Did I have a relationship with my superintendent?
Adrian: Actually, that's about right.
Paul: Hello Robin. Sorry about that. He's really insistent on this point... so, before I answer back in proceedings, I just need to know --
Robin: No, I didn't. I told Adrian.
Paul: So it's complete horseshit that you stayed over in the lake view master bedroom one night?
Robin: There was no intimacy. He put Rohypnol in my wine. I have no memory of the night. Just waking up.
Paul: That's a worry. If you were unconscious, he can invent anything.

If this scene doesn't make you want to scream, something is wrong. Imagine what it's like to spend your entire life having some version of the inane conversation above. If you're a woman or person of color, I'm sure you don't have to imagine anything because you've experience it firsthand. Your words and actions don't matter. Why even say anything? They're just going to be manipulated and used against you, anyway. Robin knows this. It's partially the reason why she's barely keeping her shit together, constantly falling apart at the seams. It's hilarious, really... because Robin is actually the most together character on "Top of the Lake."

Remember when Isadore tells Pyke and Julia that Puss's story is best read as an allegory? So is "Top of the Lake." If you haven't realized this by now, you should probably just stop watching the show.