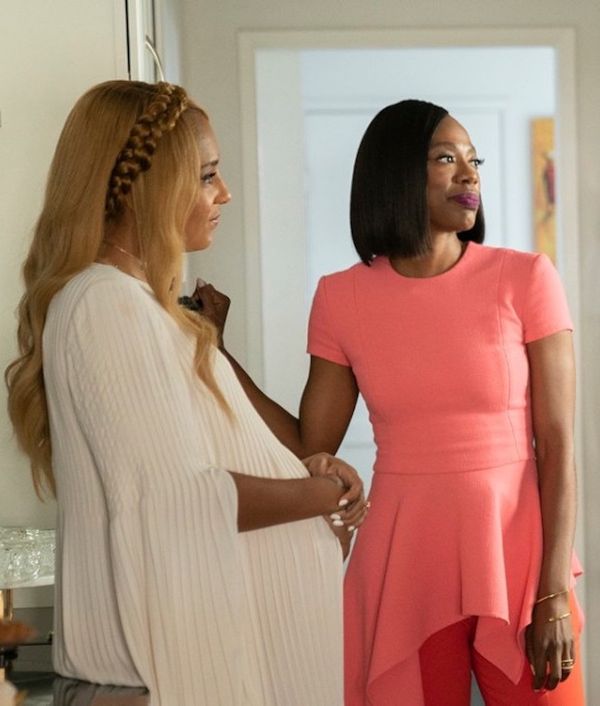 "Ready-Like" is directed by Liesl Tommy, written by Laura Kittrell. Tommy is primarily known for her work in theater but has recently pivoted to television and film. Her past work includes episodes of "Queen Sugar" and "Dietland," and she is currently working on "Born a Crime," the upcoming film adaptation of Trevor Noah's autobiography. Refinery29's Rebecca Farley wrote a nice feature on her last month that I recommend checking out if you'd like to know more.

I'm not terribly familiar with Kittrell outside of "Insecure," but one cool thing I can tell you about her is that she helps run a cool website called "I Heart Female Directors." Each week, someone writes a new love letter to a female director and the site features it, along with an illustration. It is legitimately cool, and I highly recommend flipping through all of the letters. Aside from this website, Kittrell has written for "The Michael J. Fox Show," "The Comedians," and "Downward Dog." She's been working on "Insecure" since S1, so check out her past credits there, too.

E6 picks up where E5 left off: with Issa, Chad, and Lawrence in 7/11. Issa smiles and asks her ex, "What have you been up to?" What follows is a flashback look at homeboy's recent activities. Spoiler alert: he's been busy raw dogging every woman in Los Angeles and his nasty behavior has been rewarded with a case of chlamydia! You wanna fuck around? Cool, but wear a damn condom. At least he gets tested for STDs after his spree and calls all of his previous sexual partners to inform them of his 🔥 dick. He might be gross, but at least he has a moral compass, unlike Chad (Neil Brown Jr.).

Remember this motherfucker? He was engaged to a woman named Leah but based on the flashback, it sounds like she left his ass at the alter because he titty-fucked some strippers at his bachelor party and she found out about it. Good for Leah! Chad is a disgusting, misogynistic trainwreck who deserves to die alone in his California King c/o an untreated case of syphilis.

After Chad trashes Leah, Lawrence even says, "Yeah, look, it's OK if you hurt, man." Instead of admitting that yes, he does hurt because his irresponsible actions have led to the downfall of his long-term relationship, Chad is all, "No, no, I'm good. I'm doin' great. I'm unbothered." Okay, Chad. Sure. YOU fucked up, YOU made a mistake, but don't own up to it and apologize or try to become a better person.  Instead, never admit blame, lie about your feelings, shame women who make similar missteps (Issa), and deflect attention by poking fun at Lawrence's chlamydia. Molly should refer Chad to her therapist because he is clearly in need of some real talk from Dr. Rhonda Pine.

Lawrence, unlike Chad, seems to have experienced some growth because he says, "I mean, I'm 32 years old. Can't keep doin' this shit. You know, it's gotta be more to my life than just goin' to work and fuckin'." I like that he's being honest with himself even though many other dudes would tell him not to worry because he's living the dream. I also applaud him for defending Issa when Chad tries to drag her. Lawrence says, "She's not a ho. She just did some ho shit." He claims he wouldn't get back together with her because although he's forgiven her for cheating, he can't stop seeing her as a cheater. Despite these claims, I feel like there's something percolating at the baby shower and it worries me deeply. I'm happy Lawrence and Issa are both working on self-improvement and that they're able to have a nice, mature conversation, but I absolutely do not want them to get back together.

Lawrence was a lazy boyfriend who did the absolute bare minimum in their relationship and took forever to get his shit together. Issa tried to motivate him but got tired of it and instead of discussing her feelings with him, she let them come out in passive aggressive digs. Eventually, the built-up bitterness and resentment led her to cheat. That doesn't excuse what she did at all, but I understand why it happened. I do think that if they got back together now, Lawrence would be more supportive and understanding of Issa's needs. After hearing about Issa's block party dream, he even offers to help her with her business plan, which is sweet. In turn, I think Issa has learned how to better vocalize her feelings this season. Instead of bottling everything up and letting the relationship get to a bad place, I think/hope that she would be able to express them before truly dark emotions take hold.

While they've both absolutely made improvements, I don't think they would work as a couple because they're not strong enough individually to overcome the broken trust that is a byproduct of cheating. Think of how much shit Lawrence would get from people like Chad if he and Issa got back together. Could he handle their taunts without later punishing Issa in some way? I doubt it. Issa is finally starting to gain some confidence and focus on her passions and goals. The constant reminder of the time she slipped up and ruined her relationship would be detrimental to her progress and Issa doesn't need that in her life right now. I'm cool with her and Lawrence remaining friendly, but I absolutely do not want them to get back together.

I don't want Issa to keep seeing Nathan, either. Unless something tragic happened, there is no excuse for straight-up ghosting after telling someone how much you like them. At the start of the episode, he's sweet and supportive, but once news of the open Lyft investigation hits, he's nowhere to be found. What's worse is that Issa eventually receives confirmation that Nathan is 100% avoiding her. He gives a statement to Lyft and the investigation is closed, but Issa's texts and calls remain unanswered. I think this dude fled Houston because of some legal trouble and is now in a panic over yet another brush with the law. Maybe he has a kid and is behind on child support? Whatever the deal is, it better not impede Issa's progress.

Molly is still slogging away at work, trying to simultaneously help Taurean and prevent him from stealing her shine. When hot Andrew returns her jacket and asks her out, she brushes him off with a lame work commitments excuse. Later, while putting together Tiffany's diaper cake, all of her friends are shocked by her behavior. Issa says, "Girl, what's the problem? Andrew's cute! And he must really like you, 'cause I would've thrown that jacket away and chalked it up to God." When they ask if Molly blew him off because he's Asian, she confirms their suspicions: "I've dated outside my race before, but I know I want to end up with a Black man, so what is the point?" Ugh, Molly. Every dude you date doesn't have to be marriage material. Take a note out of Kelli's book and just have fun for a second.

Molly needs to learn to roll with the punches, to move outside of her comfort zone and give people or situations a chance when they have the potential to turn into something good. To her credit, she gave Dro and his open marriage situation a chance ... but she always knew deep down that it was fundamentally against what she wanted out of a romantic relationship. In a way, it was a form of self-sabotage because she knew it was never going to turn into something she found fulfilling. With Andrew, the only "red flag" is his race. She's only against dating him because he doesn't match up with the picture she has in her head of what her life is supposed to eventually look like. Based on the previews for the next episode, it seems like she realizes this and decides to give him a chance. The news that Dro (who is a dick to Molly when she attempts to be civil) and Candice are expecting a baby might be what pushes her in the right direction.

While Tiffany's baby shower is a shitshow for many reasons (her pregnancy art, the crazy crew, the fact that it's co-ed), the worst part is the way that she treats Kelli. I felt bad for Tiffany at Coachella because she was forced to babysit everyone and on the cusp of a big life change that no one seemed to acknowledge in any real way. In a rare moment of truth, she opened up to Issa and expressed her feelings, which definitely helped me empathize with her. In this episode, she's back to her fake, pretentious nonsense, completely leaning into the goddess/mommy role and embracing friends who understand her (aka other bougie ass bitches with children).

The moment I hate the most is when the crazy crew friends insult Kelli's cupcakes and Tiffany stands by idly and lets it happen. When Kelli finally calls her out on her bullshit, Tiffany tries to play the victim card and claims she wanted the core group to throw her a baby shower but that no one offered. Issa and Molly both give weak excuses for why they didn't/were too busy, but Kelli reminds Tiffany that she actually did ask about it:

Kelli: OK, I agree, these bitches [meaning Issa and Molly] whack as fuck. But when I asked you, you said you had it handled.
Tiffany: Blair asked to do it, and, you know, she's a mother, so I just thought she'd be helpful.
Kelli: So because I don't have a baby, I couldn't do that for you?
Tiffany: You can ...
Kelli: But?

As Tiffany's face goes blank, the unpoken repsonse to Kelli's question is clearly "But I didn't want you to." Kelli's crestfallen reaction to Tiffany's non-response is pitch perfect and I completely understand what she's going through. As someone who will probably stay childless forever, I worry about growing apart from my friends with kids and finding ways to remain close to them even though I won't relate to many of their experiences. Thankfully, my friends are not assholes like Tiffany. One day, when the rift between them has grown so wide that they no longer talk, Tiffany's going to realize how much she misses Kelli, but it will probably be too late to repair the damage.