"Backwards-Like" is directed by Mo Marable, written by Ben Dougan. I was really happy to see Marable's name on the credits. He's directed a bunch of standlone TV episodes, but I primarily know him as the founder and creative director of Brim + Brew, the creative agency responsible for one of my all-time favorite title sequences.  If you're a fan of TV (and HBO especially), you've definitely seen promos for shows like "Sex and the City," "The Sopranos," and "Six Feet Under" that were created by his company. This feature on him in Fast Company gives a good overview of his work, if you're curious to read more.

Dougan worked on "Late Night with Jimmy Fallon" in 2010 and a few other TV shows, but I'm most familiar with his work on "Insecure." He has been involved with the show since Season 1 and is apparently responsible  (along with Dayna Lynne North) for inspiring "Due North," the series-within-a-series about an illicit slave romance.

At the beginning of the episode, we see Issa's fantasy, of Daniel going down on her while she eats Flamin' Hot Cheetos, play out until his question ("What else does the heart want?") makes her snap back to reality. At first, I was relieved because I didn't want Issa and Daniel to hook up yet, but then I was mad at her. Platonically sleeping in an ex-lover's bed is unrealistic and I knew it was only a matter of time before her sex dream came to fruition.

While Flavor Flav gets a blueberry facial and palm massage at the dog salon, Issa admits to Molly that she hasn't exactly been sleeping on Daniel's couch this whole time. Molly, understandably, is skeptical of this arrangement ("Ohh, girl, no"). The beautiful thing about Molly and Issa's friendship is that even though they might not always make the best decisions for themselves, they generally give each other solid advice. Later, when Molly bitches about work at the group dinner, Issa is the first one to point out that she better not be expressing those harsh opinions at the new office.

And speaking of Molly's job at the Black-owned law firm ... it's not exactly what she expected. They don't use DocuSign, treat her office as the de facto storage room, and start meetings late. Although she assures Issa that she isn't openly bitching about her gripes at work, that isn't exactly true. Molly comments several times to other employees that things were different at her old firm, so frequently that someone makes a snarky joke about it at a meeting. She tells her friends,

"If you're gonna be a black law firm in Century City, then be a Century City law firm. It's like when black people buy big-ass houses and can't furnish it. My uncle got an 8,000-square-feet house and just a bean bag."

Molly went into this job expecting it to be exactly like her old firm but with additional perks like "shea butter dispensers in the bathroom and shit." In other words, a top-notch law firm with money and resources, but Black co-workers she can relate to instead of all the White, bro douche drama from her old office. As Kelli points out (and immediately proves), "We are harder on ourselves than White people sometimes, because we've been conditioned not to trust each other." Molly goes into the new gig hyper-attuned to, and critical of, every little difference.

I imagine she feels similarly to me when I see another woman get too emotional in a heated meeting. I want to scream, "Stop it! You're giving all of us a bad name by breaking down like this and adhering to bullshit stereotypes," even though I know it's completely unfair. This storyline is rife with potential for commentary on race and I'm excited to see it progress throughout the season.

While Molly struggles to acclimate at her new job, Issa comes to terms with how much she truly dislikes her old one. At the job fair, Frieda bounces around excitedly, anxious to find a new person (not a White one because "We've given White people enough time") to work at We Got Ya'll. While Frieda oozes enthusiasm, Issa is pretty  lackadaisical until she stumbles upon The Beat Crew's performance. When she finds out that the organization works with musically gifted kids in the neighborhood, she's clearly very interested. The guy she talks to even asks if she's looking for a job, but she sadly says she already has one. She does take a flyer, which I hope is a sign that she'll keep her options open and start looking for new jobs soon.

When Antoinette (Karen Obilom) interviews at We Got Ya'll, it's even more apparent that it's time for Issa to gtfo. After Frieda leaves the room, she asks Issa how it is for her, a Black woman, at this predominantly White organization. Issa says, "They are how they are. But honestly, it's like any job." After Issa reveals that she's been there for five years, Antoinette comments, "Wow! You must really like it then." Issa's tight-lipped, forced smile says it all. No, she doesn't like it at We Got Ya'll and also ... it's been fucking five years? It's nice to see Issa finally start to think about her career instead of remaining miserable on autopilot.

The other notable Issa career news is that she accepts the property manager job. Although the apartment she sees has a lotttttt of wood, it's also equipped with a cute little bathroom with a mirror that beckons her to take a closer look at herself. Who does Issa want to be: an independent woman with her own place or a squatter at her nebulous dude friend's? Even more appealing is the subsidized price. The apartment typically rents for $1,500 but is only $750/month for the PM. She'll probably need to learn how to use a plunger and deal with Trina in 2A, but all of that is worth it (🤞🏻) if it gets her out of Daniel's house.

Daniel is another character on the career struggle bus this episode. He meets with Khalil, who compliments his beat but mentions that Spyder typically likes heavier bass and drums. Khalil asks Daniel if he can take a crack at revisions and in the span of a few seconds, strips everything out and completely simplifies it. While Khalil thinks "that shit kinda bump," Daniel is clearly not satisfied. At the laundromat, he tells Issa he doesn't want people to think he's "about that simple shit," which I understand. What I don't understand is why he doesn't just tell Khalil he wants to show Spyder both beats. Khalil seems like a nice guy and I don't think he would fault Daniel for asking.

It's much better than the alternative, which is saying nothing and just playing Spyder the original beat right off the jump. In this instance, I don't blame Khalil for getting pissed because Daniel's action make him seem shady, like he used his friend for a connection but didn't actually want his advice or help on the music. I wish Daniel would speak his mind more freely instead of bottling everything up and getting angry when people don't understand him.

The way he treats Issa at lunch is another example of this behavior. Instead of explaining that he's upset about how things went with Spyder and irritated that she's not being blindly supportive of him, he deflects and tries to make her feel like she's unqualified to give him advice. He tells her, " Your life is all over the place. I always save you from some shit." What he says is harsh and meant solely to hurt Issa. In an interview with the New York Times, Y'lan Noel says,

"That particular conversation with Issa [in Episode 3], I think he wasn’t seeing clear. He was already seeing red, given what had just happened with Khalil. And she was extremely objective, but he had this sense of betrayal, and he wanted her to have his back in the same way that he had hers. It was a rejection compounded by the fact that she just told him that she was moving [out of his apartment]."

Remember when Daniel nutted in Issa's face? This behavior is incredibly similar. Instead of expressing how he really feels, he lashes out and punishes her in a way that is kind of unforgivable. E2 shows us why Issa and Daniel work when they're both on the same page, but E3 demonstrates how quickly things can spiral when one of them is in a bad place. When Issa's opening sequence fantasy comes true (sans Cheetos), it doesn't feel right and she shuts it down almost immediately. New Issa might make some of the same mistakes, but she's learning and improving at the same time. I think it's fair to say that she's sticking to that "know better, do better shit" mantra that Molly defined in E1. 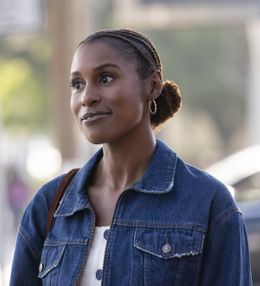 Interview with Hannah Roze & Shannon Spangler on 'The Disenchantment' 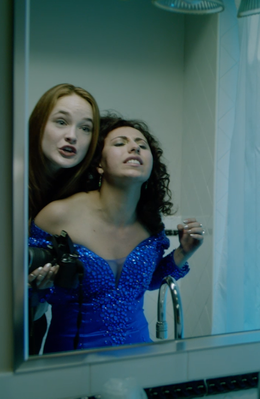