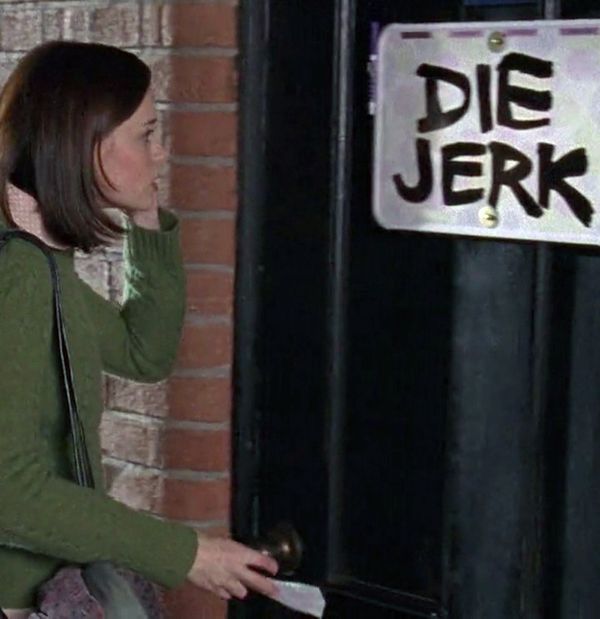 Directing and writing credits:
"Die, Jerk" is directed by Tom Moore, written by Daniel Palladino. This is Moore's first and only episode of "Gilmore Girls." He's best known for his work in theater, primarily as the director of the OG Broadway run of "Grease" and the Pulitzer Prize-winning play, "'night, Mother" (he also directed the screen adaptation of the latter). He's worked steadily in TV throughout his career and directed episodes of shows like "ER," "Suddenly Susan," and "Mad About You." Coincidentally, he has an MFA from Yale.

I have no Palladino news for you, but please feast your eyes on his pink suit from the S1 premiere of "The Marvelous Mrs. Maisel."

Most batshit crazy outfit:
Lauren Graham has a great body, but this clingy (faux?) wrap dress does nothing for her. The cut of the sleeves accentuates the widest part of her arm, the print and colors are awful, and it gaps in all the wrong places (the bust and the ass). What's worse is that the wardrobe department decided to pair it with a wrap watch and mid-calf boots. The entire ensemble is tragic.

Rory's outfit isn't much better. From what I can tell, she's wearing a tweed, sparkly dress that might actually be cute on its own but is unfortunately paired with a brown, pastel polka-dotted cardigan.

I do love Paris' sweater, which reminds me of a crochet granny blanket. It's not something I would personally wear, but it works for her.

Number of times Rory or Lorelai treat their bff like shit:
Zero! Lane is preoccupied with her "marriage jug" drama and Rory is sufficiently supportive. I know Mrs. Kim is strict/religious, but have a hard time believing that she would try to arrange a marriage for Lane, especially with a non-Korean.

Sookie does all of the annoying shit that many new parents can't resist. Bruce, who is still around because she's a lactation specialist, is a straight-up dick to Lorelai. Instead of reprimanding her, Sookie stands by idly and does nothing. Did Sookie forget that she's the one paying this woman and that she has all the power in the equation? Michel is not allowed to come in and meet the baby because of a single sneeze. How does Sookie think that children build up their immune systems? She may as well place little Davey in a plastic bubble for the rest of his life if she's going to act like this. Were I in Lorelai's position, I would have had a hard time keeping my mouth shut during this insanity, so I must give her props for keeping it chill.

Best literary or pop culture references:
Richard asks Lorelai and Jason which camp they met at and they have a quick debate:

Lorelai: Hm, it had a funny name and canoes.
Jason: They all have funny names and canoes. Was it Camp Waziyatah?
Lorelai: Doesn't sound familiar. Which one asked me to leave?
Rory: You got kicked out of camp?
Lorelai: I tried to liberate the horses.
Jason: Camp Chateaugay. That's where we met.

Stars Hollow weirdness:
"Die, Jerk" is missing all of Daniel Palladino's signature townie charm. We don't even get a Kirk appearance!

Sharpest insult or one-liner:
I love it when Lorelai is inappropriate at Friday night dinner and no one even acknowledges it:

I would expect this line to get an "honestly, Lorelai" out of Emily, but she breezes right past it.

Best song of the episode:
Rory attends a performance in the final scene that features "Michael, Row the Boat Ashore." It's the only song featured, so it wins by default even though it's horrendous.

Thoughts:
This is the episode where my suspicions are confirmed: Rory is a shit journalist and the (fictional) Yale Daily News is a joke. During the first Friday night dinner, we find out that Rory isn't actually on staff yet. She's been writing "tryout articles" on everything from lacrosse to chamber music recitals in hopes of locking down an official spot. The grandparents are so proud of her and in the process of laminating everything she's written.

It's sweet that Richard and Emily are supportive, but I fear it's a bit of a "participation trophy" situation. If everyone hadn't constantly licked Rory's asshole during her formative years, maybe she would have grown into a functioning adult instead of a sad, unstable nobody by the time we see her again in AYitL.

Thankfully, not everyone is as praiseworthy as her family. As Rory leafs through the new issue of the YDN, she realizes that her chamber music piece didn't make the cut. I love that this happens after Paris says, "They'd print my mattress tag if it was in the right margins."

Rory approaches Doyle and provides him with several built-in excuses for her article's absence. Maybe she turned it in late? Was there a space issue? No, Rory, your piece was "a bit of a yawn." Watching her grapple with this criticism is delightful because it's clear that she has no fucking clue how to handle it. She's been told her entire life how special and wonderful she is and now, finally, someone disagrees with those claims.

Her second article (topic unknown, but I assume another review) receives similar feedback. Rory is horrified and has the nerve to ask Doyle if this is some kind of "hazing" thing. He tells her that it isn't and explains that her opinions didn't come through in the writing. I'm happy to see Doyle fairly criticize Rory, but I'm completely against his whole vibe. I don't understand why he's wearing a tie and acting like an experienced 35-year-old professional instead of a peer. Based on the fact that he's still around in S6, I assume he's a college sophomore at this point. Doyle needs to step away from the newsroom for a few seconds, loosen his tie, and indulge in several bong hits.

In preparation for her next piece, a ballet review, Rory brings Lorelai with her to the recital. The performance is a disaster and although we don't see any of it, their comments suggest it's the fault of the lead ballerina. Here's a taste of their commentary during the show:

Yikes. If I was feeling super bitchy, I might make similar comments to my mom ... but you know what I wouldn't do? Incorporate them into a review for a bunch of people, including the ballerina in question, to read. I can be harsh sometimes, but I never body-shame anyone or make nasty comments outside of a specific performance. Saying what you actually think is important as reviewer, but in a diplomatic way that isn't meant to ruin someone's day.

Instead of reading her new piece and telling her to take it down about 5,000 notches, Doyle is like, "really great job." Aren't these people taking journalism classes and learning about ethics? Isn't this Yale University? Where's the quality control? The faculty advisors? Someone should prevent an article from running that refers to a young woman as a "hippo." Unfortunately, no one does. The article comes out and Rory forgets all about it until she arrives back at her dorm room to see that someone has written, "DIE, JERK" in permanent marker on the whiteboard outside of her room.

Paris, of course, thinks that this message must be for her. After all, she's the Regina George of this show (sans popularity) and has the most obvious enemies. Rory doesn't even consider that this message might be in relation to her recently published takedown in the YDN. When Janet asks if she's made anyone mad recently, Paris jumps in and says, "Oh, please, that would be like Dorothy pissing off the Tin Man. It's impossible."

Paris is wrong, though. Rory has pissed off Sandra (Katherine Brunk), the lead ballerina, and is in for a dining hall confrontation and some mild death threats. Rory defends herself in the lamest way possible and essentially tries to blame everything on Doyle: " It was an assignment from my editor, so it was nothing personal, okay?" Sandra doesn't buy into this nonsense and tells Rory, "You're a jerk, and I hope you die! Bye, jerk. Die, jerk." As she sashays away, Rory looks flummoxed. It's as if she's thinking, "My actions have consequences? Interesting."

At Friday night dinner, the grandparents are over the moon about her review. They commend her for her "honesty" and laugh at all of her meanest lines. Lorelai has a different reaction and although she doesn't exactly tell Rory that she what she did was wrong, she does say stuff like "People don't write as mean as they talk, except you." This discussion of the review, coupled with Sandra's reaction, seems to make Rory realize that she crossed a line. She approaches Doyle and asks to review the ballet, but he tells her she just needs to deal with it, that "Hurting people's feelings is what we do." What a lovely lesson!

In the final scene, she's back at it, reviewing something new and undoubtedly making more enemies. Moral of the story: being a dick is okay as long as you're doing it for your own personal gain.

Lorelai's storyline is far less interesting this episode. She talks to Sookie about the Inn, has an awkward run-in with Nicole (and judges Luke for putting his divorce "on hold"), and tries not to be charmed by Jason's advances. I know many fans are like, "ugh, Digger," but I think he's perfect for Lorelai and although I personally don't find him attractive, I do occasionally find him charming. Weaseling his way into a dinner invitation and then asking Emily for restaurant recommendations in front of Lorelai is a bold move that she clearly enjoys. Rory later comments that "There was a palpable vibe." After boring Max and Billy Burke, Lorelai deserves someone who keeps things exciting, so I support this budding romance.