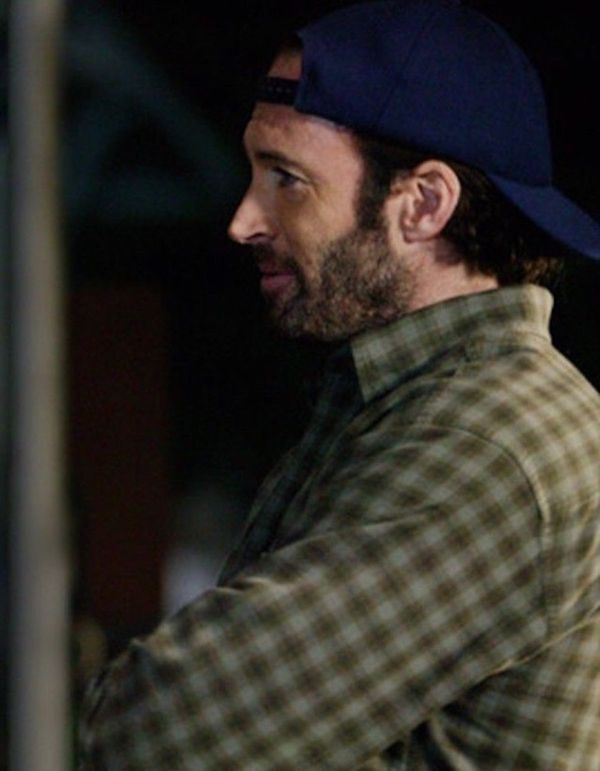 Directing and writing credits:
"A Family Matter" is directed by Kenny Ortega, written by Daniel Palladino. You should remember Ortega (dance master extraordinaire) from these previous episodes:

I don't have any Daniel Palladino news BUT there have been some exciting new developments surrounding S3 of "The Marvelous Mrs. Maisel." Sterling K. Brown recently announced, via Twitter, that he's going to be on the show 🙌🏿

Most batshit crazy outfit:
Rory and Lorelai's outfits are standard ugly but unremarkable. Lorelai wears a gross argyle sweater that I assume is from Kmart. I can clearly picture it hanging on one of those flimsy plastic hangers with the color-coded size tabs. Rory continues to sport what I call early 2000s Ivy League faux chic. This look involves several plaid skirts, tight sweaters, and a wild assortment of grandma scarves. What I really want to discuss is the selection of men's turtlenecks on display this episode.

Digger and Jamie, I hate to be the bearer of bad news, but these turtlenecks make your heads look like dicks. You have to be incredibly attractive to make this look work and neither of these dudes are ticking the necessary boxes.

Most irritating Rory or Lorelai moment:
If you're too ashamed or scared to tell your parents about your new boyfriend, then either something is wrong with him or you. As much as Lorelai likes to pretend that she's so subversive, she still wants approval from her parents. She knows that Emily dislikes Digger, and despite whatever lame ass excuse she initially gives, I think that's why she's hesitant to spill the details at dinner. She needs to rip off the Band-Aid and get on with her damn life.

Number of times Rory or Lorelai treat their bff like shit:
Sookie is MIA but Lane is straight-up living in Rory's dorm room. Allowing her friend to stay is a nice gesture, but I wish she had asked her suitemates if it was cool first. Lane is amazing and helpful - conducting makeovers, grabbing coffee, acting as a human alarm - but having someone's high school friend chillin' for an undefined amount of time would make me rage.

Best literary or pop culture references:
I love Paris' morning espresso routine that includes a) telling people to die (twice) and b) screaming things like "Good mooooooooorning, Vietnam!" I used to love that movie as a kid but haven't watched it in probably at least 15 years. RIP Robin Williams ... now I'm depressed.

Stars Hollow weirdness:
Kirk freaks out when Lorelai asks to sit at his table at Luke's. She assures him that she's not flirting with him, then proceeds to heavily flirt with him. He grows increasingly uncomfortable and finally shouts, "I have a girlfriend!" For a Daniel Palladino episode, this one is annoying light on townies.

Sharpest insult or one-liner:
Rory has this exchange with Lorelai over the phone, then tells Paris she's "paranoid" when she asks if they're discussing her. It's an unusually bold move on Rory's behalf and I love how grossed out she is at the veiled mention of Asher Fleming's floppy ballsack.

Lorelai: Was she at the professor's again last night?
Rory: Yes, but she claims she was up all night cramming.
Lorelai: Well, she was.
Rory: Oh, ick!

Lorelai's joke is on-point and I guess there's really nothing she can do, but a modern-day version of this show would hopefully have her express distaste for the unequal power dynamic between an old, tenured professor and an impressionable college freshman. The sex isn't the most sickening part of that weird-ass "relationship."

"Happy families are all alike; every unhappy family is unhappy in its own way."

Jess carries a copy of Herman Melville's "Billy Budd and Other Tales" in the back pocket of his jeans. I must admit that this arouses me.

Best song of the episode:
Lorelai listens to Bananarama's "Shy Boy" before Friday night dinner. It's a catchy tune and wins by default since it's the only one we hear.

Thoughts:
This episode is light on Rory which is fine with me because I find her unbearably annoying during the college years. If you're watching this show for the first time, I feel it is my duty to warn you that things only get worse. If you think Rory is insufferable now, just wait until Logan gets added in to the mix.

At breakfast, Lorelai flirts with Kirk and desperately tries to identify the "rock-and-roll hippy-chick" who is deep in conversation with Luke. This is a generous, not very accurate description of Liz (Kathleen Wilhoite), Luke's sister. She's more like your wacky aunt who collects Precious Moments and spams everyone on Facebook with posts about her newest business venture pyramid scheme. The show tries to act like Liz is a total free spirit/Stevie Nicks type when she's actually tacky and pathetic. If you haven't already figured it out, I'm not a fan.

Liz is in town for her twentieth high school reunion and decides to use this opportunity to annoy the shit out of Luke. In her defense, Luke is pretty mean to her. She's obviously a total fuck-up but at least she's trying to get her life back on track. She has a job, an apartment, a new boyfriend, and even refrains from smoking the pot that she finds in the back of Luke's closet (I wouldn't have). Luke is rightfully skeptical, and I understand his irritation but shit like this crosses the line:

Liz: It's a total trip. I wear the long skirt. I have a hat and one of those corsets that squishes my boobs all up high. And I yell "Huzzah for the tipper!"
Luke: And that's your great new job? You sell earrings at the Renaissance faire?
Liz: I know it sounds flaky --
Luke: Oh no, what - huzzah for the tipper with your squished-up boobs, not flaky at all. Look, I have to go back to work.

If you want your train wreck sister to stop asking you for money, maybe act supportive when she tells you she has a job. This is easier said than done, though. I personally would struggle to remain impartial if my brother made a long string of bad life choices and always came running to me to fix them.

When Jess shows up at the end of the episode, Luke's sass is honestly kind of vindicated. He mentioned the car to Liz, she immediately informed Jess, and that little shit burger came running back to Stars Hollow to secretly retrieve it. After the car broke down on the expressway and the cops realized that it was reported stolen, they brought the entire mess back to Luke's. Thanks, Liz!

The scene between Jess and Luke is one of the best they've ever done and I'm immediately reminded of how much I like these actors together. Jess feels like Luke wronged him by kicking him out and then neglecting to care for his car. Luke is pissed that after Jess left, he never bothered to call or write. Luke tried his damndest to do right by Jess but his efforts went largely unappreciated. Jess ends up sleeping outside in his car until Rory and Lorelai find him post-hocho run. Rory is upset and wants nothing to do with the entire situation, so she leaves and lets Lorelai handle it.

To her credit, Lorelai is pretty good at talking Luke down and helping him realize that no matter how pissed he is at Jess, dealing with a "frozen carcass" the next morning isn't worth it. When Luke leaves for Nicole's, he does end up inviting Jess to spend the night at his apartment. I must award Luke and Lorelai maturity points because I would have let the little turd turn into an icicle with zero remorse.

Aside from Luke's drama, other points of interest are Lorelai and Jason's antiquing trip and Paris' break-up with Jamie. Remember that moment in "Shrill" when Ryan (Luka Jones) makes Annie (Aidy Bryant) exit out the back? That's essentially what Lorelai does to Jason. She makes up a dumb excuse about Sabbath to dissuade him from coffee at Luke's and continues to insist that although risky, they should hide the relationship from her parents. It's a weird dynamic and I don't understand why he goes along with it.

Another person who deserves better is Jamie. He came to Yale to spend his birthday weekend with Paris and she makes up countless excuses to avoid him. This one is my favorite:

"Rory's small-town friend, Lane, is crashing in with us. She got kicked out of her house, and she's in pretty bad shape. She's pretty heavy into the drugs, totally Nancy Spungen-ing it, chasing the dragon, and I kind of have to be here for support. The chick's bouncing off the walls."

The Internet says that "chasing the dragon" is Cantonese slang for inhaling vaporized heroin or opium. Do we think Paris picked this up from a documentary about opiate addiction or ...?

After avoiding Jamie for an entire day, he shows up at the Yale dining hall and approaches Rory. In good friend fashion, she lies when he asks her if Paris is seeing anyone else. Later, she confronts Paris and tells her that she needs to stop treating Jamie like trash. Paris promptly picks up the phone, dials Jamie, and says this:

"Hey, it's me. We've got to end this – now. There's just no reason to prolong it. Sorry you came all the way out here."

Bish is HARSH but I'd be lying if I said I haven't done basically the exact same thing. When I'm ready to break up with someone it's typically because I suddenly find them repulsive and can't even remember what it was that I used to like about them. (Don't worry, I've discussed this in therapy.)

As much as I like to rag on this show, I do often identify with the awful traits of its female characters. I only take issue when I feel like the writing tries to mask that awfulness or couch it in some way. Paris is the only flawed female character that the show openly acknowledges and doesn't try to place on a pedestal, which is why she's my unabashed favorite.